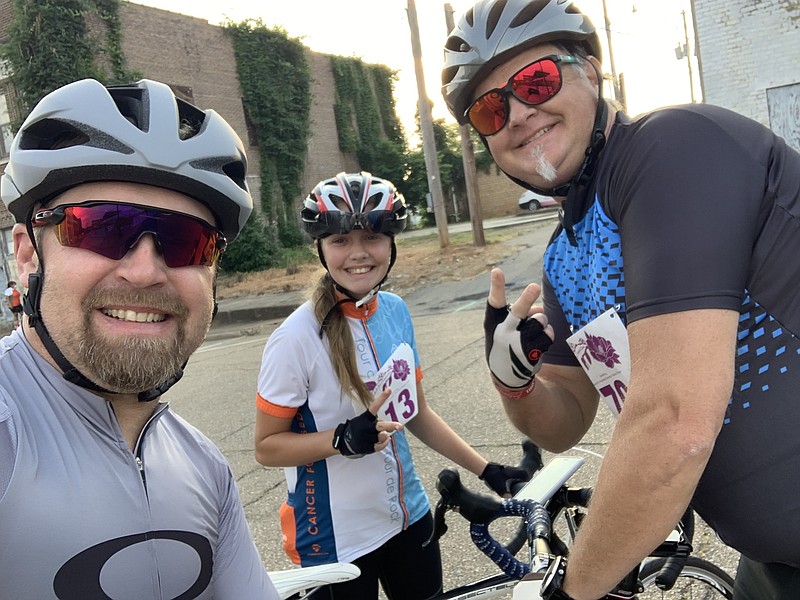 Fred Mitchell, left, stands with his daughter Brodie Mitchell and his friend Rustin Baber at the end of last year’s Pedals for Compassion Ride in Magnolia. Submitted photo

Local cyclists have made a point to support worthy causes in the past, and two friends say this Saturday's fourth Pedals for Compassion Ride benefitting Magnolia's Domestic Violence Shelter, is one of the rides they don't miss.

Rustin Baber, of Texarkana, Texas, has teamed up with his friend Fred Mitchell and his daughter, Brodie Mitchell, 15, of Ashdown, for the past three years the Compassion's Foundation has held the event which starts at 7:30 a.m. at the Square Park in Magnolia.

Options for the ride include a 15 mile, a 35 mile, a 65 mile, and a 100 mile. Registration is $70 and includes a swag bag, T-shirt, chance at door prizes and free entertainment and a post ride meal.

"On this one we signed up for the 35 mile," said Barber. "A couple of years ago before Covid, me, Freddy and his daughter thought about doing the 100 mile but we are not ready for that. I haven't been able to ride enough this last year. I'm not going to set any records on time."

However, setting records is not the reason these two friends, who met at Cooper Tire and have known each other for 20 years, complete the ride.

"The more attention that can be brought to the cause is better, anything that does bring awareness to that," Barber said. "A lot of rides we go to don't have a cause and that is one reason we do this ride. If you are going to spend money on something this is a good thing to spend it on. A lot of people spend it on pointless things."

The money raised for the bike ride is essential to keeping the doors of the shelter open. Debra Martin, Executive Director of the Compassion's Foundation Domestic Violence Shelter said last year's event had about 140 participants and raised around $25,000. Martin said the money raised for this event is critical for the organization because of budget cuts from the Victims of Crime Act.

"We are losing about $250,000 over the next two years, so this ride will help us carry on normal business. This money will be a filler," she said. "We are hoping to see at least the same number as we've been seeing, but hopefully more."

Cyclists who want to sign up can do so beginning at 6 a.m. Saturday at the Square Park. The ride begins at 7:30 a.m. and concludes back at the downtown location where there will be a concert for cyclists and the community and two food trucks, one from Postmasters Grill of Camden and the other from King and Queen Wings of Magnolia, to choose from.

The free music is courtesy of Monty Russell's management company, La 818 Music. Beaux Atkins and Trey Gauthreaux will be offering music across the board, including country and southern rock.

Russell said domestic abuse is a series of events and victims need counseling and a place to stay during the day but certainly during some situations in the middle of the night.

"The problem is bigger than one incident," he said. "Usually, domestic violence is like chains in a relationship and has multiple situations."

Mitchell said he is glad the ride is for a good cause, but he simply loves cycling. He grew up racing motorcycles, but when he quit, he started bicycling and training for long rides like the Pedals for Compassion ride.

"I've always loved riding bicycles. It's excellent exercise and gets your hearts pumping, your legs pumping and everything else," he said. "It helps my daughter in her gymnastics and cheerleading."

Anne Couch, a chairperson of the event and a cyclist, said Pedals for Compassion draws riders from the Magnolia area as well as Texarkana, Little Rock, Dallas and Shreveport.

"We have tremendous positive comments after the ride about the great support of local police and the sheriff's department which help on the routes for safety," she said. "Cyclists also enjoy the rest stops during the ride which provide everything they need to fuel up and complete their ride. The picturesque countryside is also something they have commented on."

Baber said he would recommend this ride to other cyclists who are looking for both a challenge, a good cause and a good time.

"The ride itself is very challenging because of the hills. If someone likes challenges it is very good," he said. "The way they have it set up, the after party with the band is very enjoyable. This ride is pretty rough, but it is all about finishing. Finishing is fun."

For more information about this year's event, go to the Pedals for Compassion Facebook page. 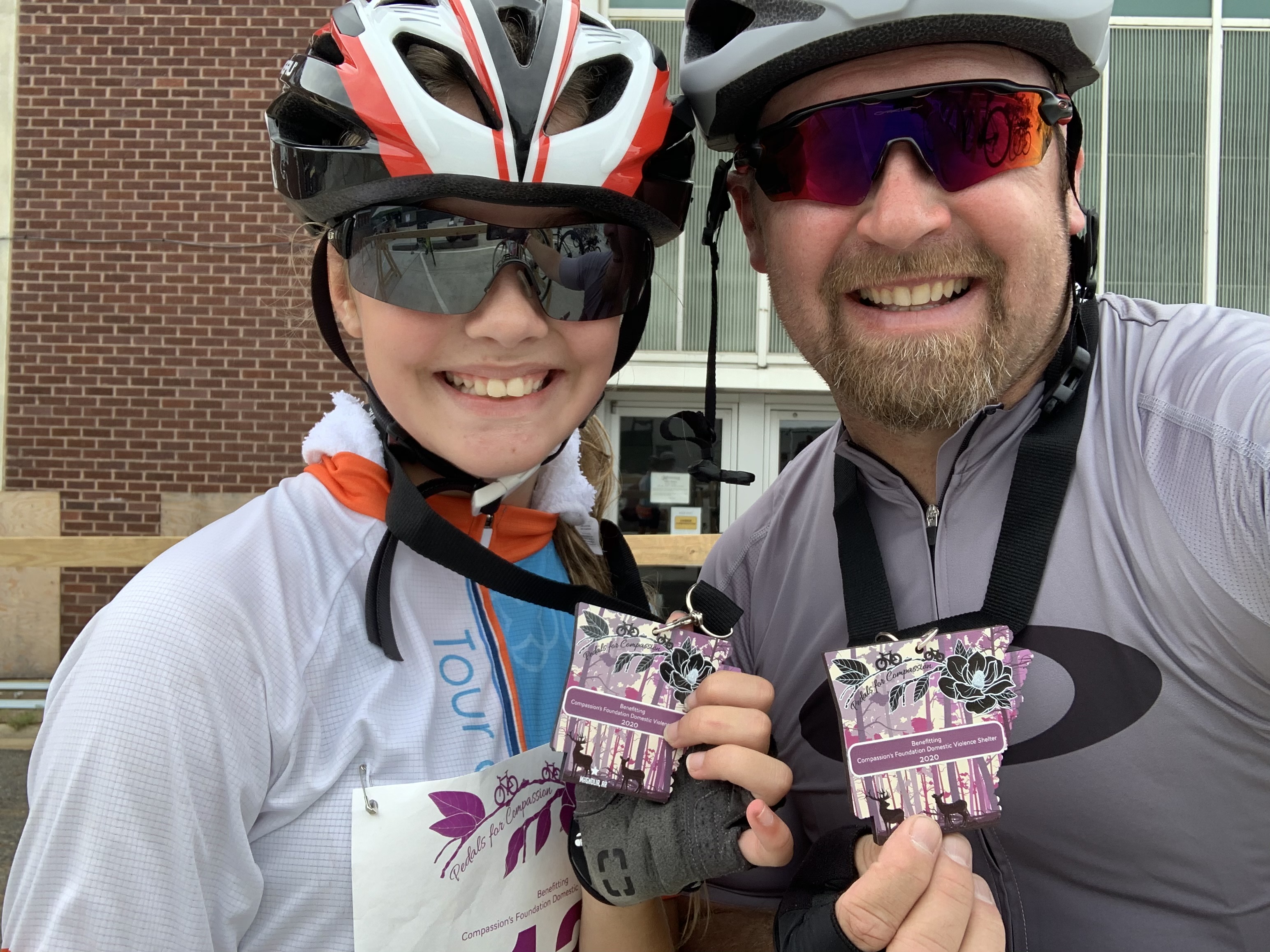 Brodie Mitchell and her father Fred Mitchell proudly display their lanyards after completing the Pedals for Compassion event in Magnolia. The event benefits the local Domestic Violence Shelter. Submitted photo