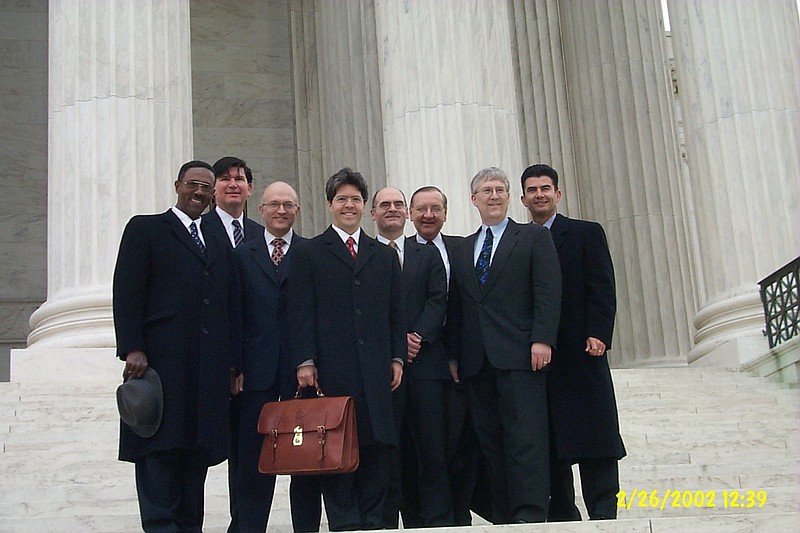 Members of the legal team defending Jehovah's Witnesses pose for a photo on the steps of the U.S. Supreme Court building in February 2002. Less than four months later, the court delivered an 8-1 decision striking down a law that required Witnesses to register with an Ohio township before going door-to-door there. (File photo)

Jehovah's Witnesses are marking the 20th anniversary next week of a landmark Supreme Court decision that upheld their right to knock on doors and share their faith without getting government permission.

The 8-1 ruling in Watchtower Bible & Tract Society of N.Y., Inc. v. the Village of Stratton, Ohio, et. al. struck down a town ordinance that made it a misdemeanor to engage in door-to-door advocacy without first filling out a registration form and obtaining a permit from the mayor.

The ruling was a victory -- not only for the organization, but for anyone who wants to knock on a neighbor's door and talk about religion or politics.

A live webinar highlighting the significance of the decision is scheduled for Friday, 20 years to the day after its release. See tinyurl.com/a6bb9wbb.

Witnesses have paused going door-to-door, voluntarily, due to covid-19, but they plan to resume once it is safe to do so.

No matter a member's occupation, "We're ministers first. We go out door to door, we write letters, we make phone calls. If we didn't, we would not be fulfilling our obligations as Christians," said Robert Hendriks, the Witnesses' U.S. national spokesman.

The tract society, founded in the 1880s, has distributed literature to every corner of the globe.

For members of the group, spreading the faith is a fundamental tenet, according to Paul Polidoro, the Witnesses' associate general counsel and the man who made the case to the court during oral arguments.

"From a religious perspective, Christ Jesus gave his followers the command to share the message of the Kingdom with everyone. And so this Good News of hope and comfort and peace is something very important to Jehovah's Witnesses," Polidoro said in an interview with the Arkansas Democrat-Gazette this week.

Commanded in Matthew 28:19 to "Go, therefore, and make disciples of people of all the nations," the Witnesses had made inroads in many communities, but not Stratton.

Witnesses did not have a place of worship, known as a Kingdom Hall, within the township, a community of 278 that is nestled against the Ohio River, a stone's throw from the Pennsylvania state line.

But members of the faith were visiting from nearby Wellsville and knocking on doors, a practice that irked Stratton's mayor, John M. Abdalla.

So village officials passed the ordinance, ostensibly to deter crime and protect residents from con artists.

But the law was not limited to door-to-door salesmen or to commercial speech. It covered a broad range of activities, including religious and political speech.

Abdalla denied the measure targeted Witnesses, who had offered to bypass any house posting a "No Solicitation" sign.

The ordinance -- which had the backing of the state of Ohio and the National League of Cities -- was largely upheld by the lower courts, but it failed to impress the nine people sitting on the nation's high court.

Abraham Cantor, the attorney representing Stratton, told the justices that the ordinance targeted "canvassers, hawkers, and those who are going door to door for a cause."

But it covered plenty of other people, too, the justices were quick to note.

"Well, how about trick-or-treaters? Do they have to get a permit," asked Justice Sandra Day O'Connor, prompting chuckles in the courtroom.

But Polidoro, the attorney representing the Witnesses, circled back around to address it, telling O'Connor that under the language adopted by Stratton, "trick-or-treaters during Halloween are mentioned, so they're encompassed under the ordinance."

Throughout the oral arguments, Cantor was peppered with questions -- and laughter, which broke out 11 times, according to the official court transcript. See tinyurl.com/ycxjs25n.

Would youngsters be required to get a permit to sell Girl Scouts cookies, one justice asked?

"Or Christmas carolers?" a justice asked on follow up.

"Or how about borrowing a cup of sugar from your neighbor," asked another.

Antonin Scalia noted that the ordinance limited not only commercial speech, but also political and religious speech.

"Do you know any other case of ours [the Supreme Court] that has even involved an ordinance of this breadth, that involves solicitation, not asking for money, not selling goods, but even, you know, 'I want to talk about Jesus Christ,' or 'I want to talk about protecting the environment?' Have we had a case like that?" he asked. "I don't even know of such cases, over two centuries."

On June 17, 2002, the Supreme Court issued its ruling. Justice John Paul Stevens, writing for the majority, said that "making it a misdemeanor to engage in door-to-door advocacy without first registering with the mayor and receiving a permit violates the First Amendment."

"The mere fact that the ordinance covers so much speech raises constitutional concerns. It is offensive -- not only to the values protected by the First Amendment, but to the very notion of a free society that in the context of everyday public discourse a citizen must first inform the government of her desire to speak to her neighbors and then obtain a permit to do so."

Only Chief Justice William Rehnquist dissented and argued that the ordinance imposed, "at most, a negligible burden on door to door communication."

According to Josh McDaniel, director of the Religious Freedom Clinic at the Harvard Law School, the decision has had a "wide-ranging impact" on free speech for all.

"Stratton is an important but underappreciated decision because it affects citizens throughout the country without us realizing it. The case recognized that the First Amendment protects our right to cross the street and ring our neighbor's doorbell to talk about anything from religion to political candidates to issues affecting our neighborhood," he said in an email. "Without this decision, going door to door without first getting government approval could be a criminal offense."

Jason Scott Smith, an Arkansas Witness who has shared his faith for more than 35 years, said Stratton "has ­allowed more than 13,000 witnesses in Arkansas to continue to do that, following the example of the First Century congregation," adding, "This decision brought great joy to every minister of Jehovah's Witnesses in Arkansas and the United States.

The ruling had an effect on every faithful Witness.

Each of them is engaged in evangelism -- even members of the organization's legal department.

Asked whether the church's attorneys are required to go door-to-door like everyone else, Polidoro said the Bible commands all Witnesses to share their faith.

"We're all ministers first. Our obligation is to Jehovah God so it's a privilege for us personally to go from door to door," he said.

Phillip Brumley, the group's general counsel, portrayed the task as a privilege, not a chore.

"I've had the privilege of helping seven [people get] to the point of baptism and they came right out of door-to-door work. When I look over at them, one is still in my congregation, boy, there's just a sense of joy," Brumley said. "I know what his life was like before he knew Jehovah and Jesus. And I know what his life is like today. And I think to myself, 'Wow, I had a little part in helping him understand these things,'" he said.

The court's ruling is here: tinyurl.com/ye28tc8n. 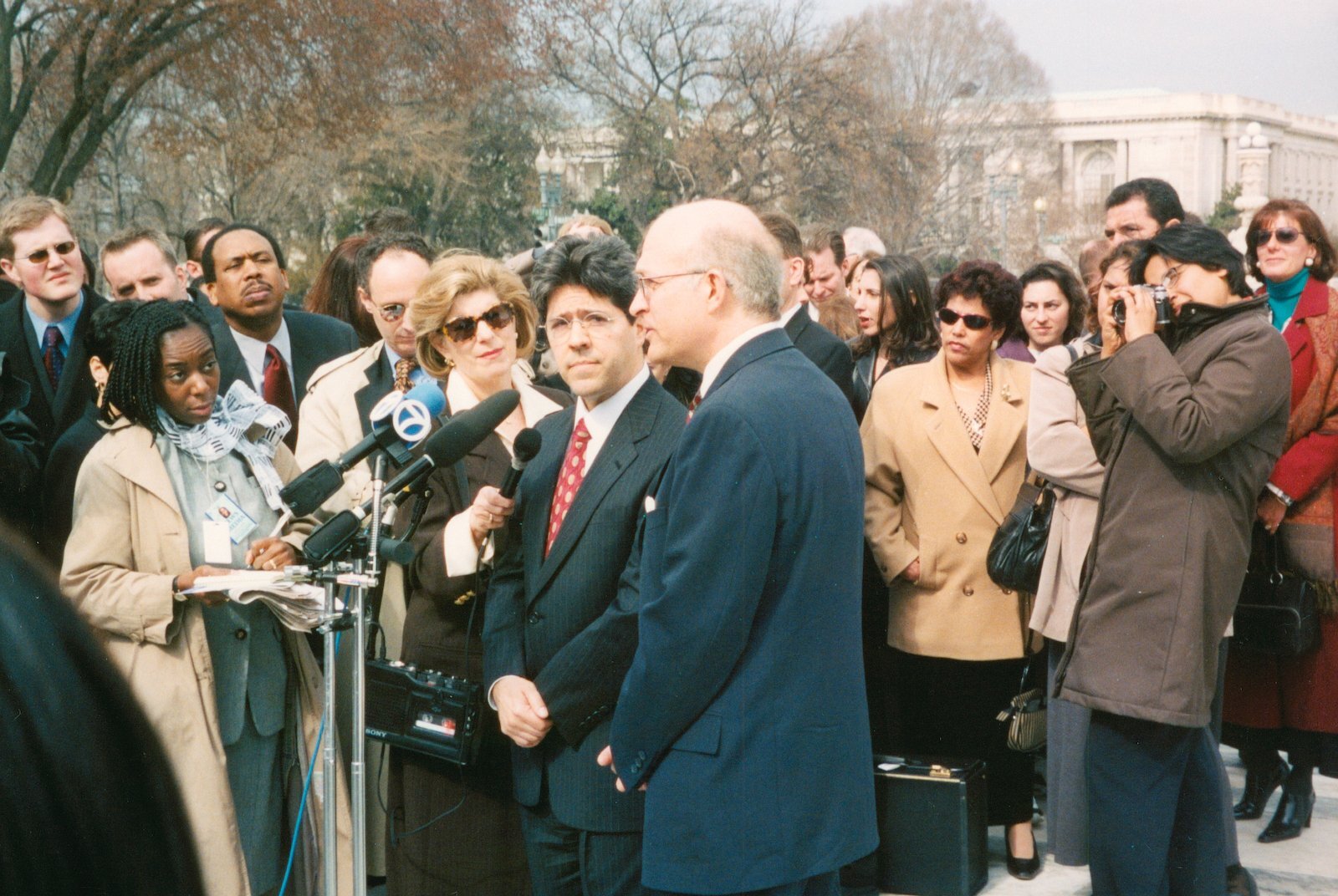 Members of the team representing Jehovah's Witnesses field questions from the press in February 2002 on the steps of the U.S. Supreme Court. The religious organization is marking the 20th anniversary of their victory in the case. (File photo)