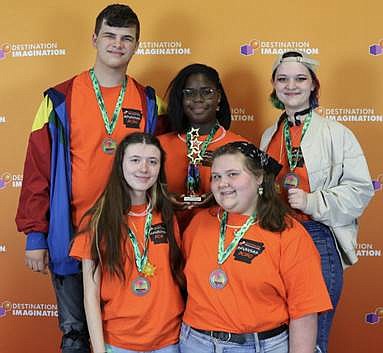 Approximately 450 teams competed from 21 states and several countries, including South Korea, Brazil, Pakistan and Poland. It was the first in-person Global Finals competition since 2019.

This year's Fine Arts Challenge was called Tricky Tales. Teams had to research tricksters and how they are portrayed in literature, movies, theater and mythology and create a skit about a trickster caught in a tricky situation. They had to design and perform an onstage costume change that had a significant impact on the outcome of the story and included an illusion that was perceived wrongly at the beginning of the story.

The Arkansas High team created a real-life working escape room that included puzzles, physical obstacles, hidden doors/compartments and chain reactions based on the Greek underworld of Hades to find the one true trickster who could help him defeat Hercules.

During the competition, the AHS team also was chosen to be the Arkansas state flag bearers for the opening ceremonies. They also were named DI Alumni at the Global Finals graduation ceremony.

Each challenge requires teams to research elements in their specific area and integrate that research into an eight-minute skit that includes props, scenery and costumes created by the team.