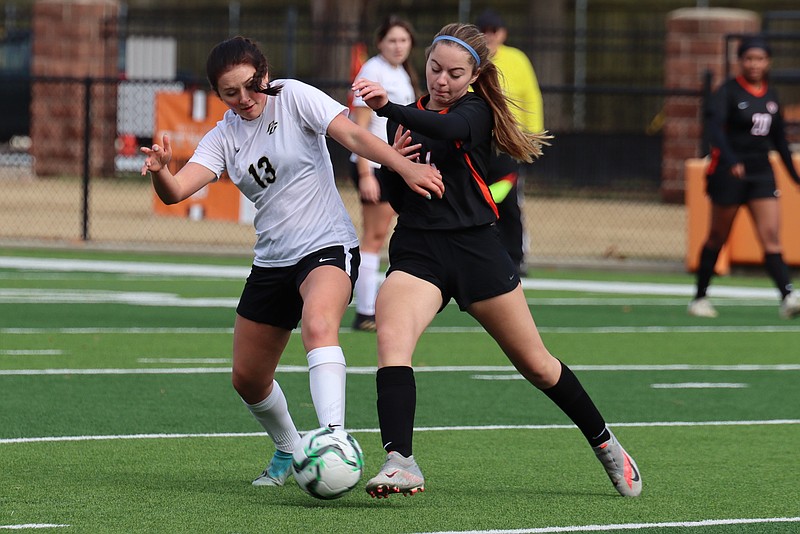 Aubrey Oller, left, and Annabeth Killian, right, fight for the ball during a soccer game between Pleasant Grove and Texas High in this undated file photo. (Photo courtesy of Melanie Allen/TXKSports)

ROUND ROCK, Texas -- The Texas University Interscholastic League will have a meeting Tuesday to consider proposals that could reshape several high school sports.

One of the proposals on the table would prohibit freshmen athletes from participating in varsity sports. An immediate concern about this proposal is how would it affect sports with limited roster size and smaller schools in football.

And, as far as some Texarkana area coaches are concerned, it wouldn't be a viable option -- especially for the girls' programs.

The girls' soccer program at Pleasant Grove has enjoyed a lot of success in recent years by putting star freshmen on the pitch, including seasons highlighted by deep runs in postseason play.

"Our best defender last year (Abigail Boehmke), who was also the defensive MVP of the district, was a freshman," Pleasant Grove coach Andy Allen told the Gazette. "Delia Tuttlebee lead the team in scoring when she was a freshman the year we made it to the regional finals.

"When Chelsea Cole was a freshman, she was our best player -- leading scorer and assists," Allen added.

Another question about the proposal is how it would affect teams that don't have a junior varsity program.

"Some teams don't have a JV, so I don't think it's wise to not let freshmen play varsity," Allen said. "This could lead to athletes potentially moving schools to one that does have a JV program."

Steven Lambeth, the McLeod athletic director and boys' basketball coach, believes the proposal -- if it even passes -- would negatively impact girls' sports more than boys.

"Boys' sports would hurt, for sure, but for girls it would be really bad," he said. "For small schools, it would kill them. A lot of the smaller schools have to dig a little deeper to fill the girls' programs."

Lambeth also finds it hard for the proposal to make sense for schools that don't have JV.

"Once you hit a certain classification, there are no JV teams in girls' track and field, for instance," he said. "Boys may have it, but no school has a girls' JV in that sport.

"More than likely, this was a proposal made by parents, so I don't see it passing."

The UIL will also look at a proposal to change soccer scheduling.

The move, which could put rosters in conflict with other sports like football, would shift from being a spring sport to playing in the fall.

"Moving to the fall would definitely affect multiple-sport athletes that play volleyball, basketball and soccer," Allen said. "They would have to choose between those sports."

Tradition could also be on the line.

Texas High and Pleasant Grove girls' soccer teams have recently deepened a crosstown rivalry that has become an annual New Year's Eve showdown in a season-opening matchup. With the new scheduling, if approved, that would no longer be possible to help kick off a new calendar year.

"What's coolest about this game is that it reflects how much Texarkana soccer has improved," Texas High coach Hillary Cloud told the Gazette in a previous story. "It's just cool to see that many talented girls come together and represent Texarkana soccer as a whole."

Adding a shot clock is the final major proposal to possibly shake up another sport, basketball, in Texas.

If approved by UIL down the road, Texas would become the 10th state to introduce a shot clock. California, Georgia, Maryland, Massachusetts, New York, North Dakota, Rhode Island, South Dakota and Washington are the other states that limit time of possession.

Arkansas also uses a 35-second shot clock, but only at the 6A level.

"I like fast-paced games, so this proposal isn't a big deal to me," Lambeth said. "We won 10 or 12 games last season by holding the ball to get teams out of the zone and play man-on-man against us. The state tournament was another example where we held onto the ball to force teams to play man and play faster.

"You can't do as much time management with a shot clock, but I'm fine with it either way."

The shot clock was also on UIL's agenda last year, but officials took no action.

The UIL will also look into old business on the agenda, including:

• A proposal regarding strength and conditioning for in-season athletes

• A proposal to alter the language regarding softball scrimmages per week

• A proposal for sixth-graders to participate at the 1A level