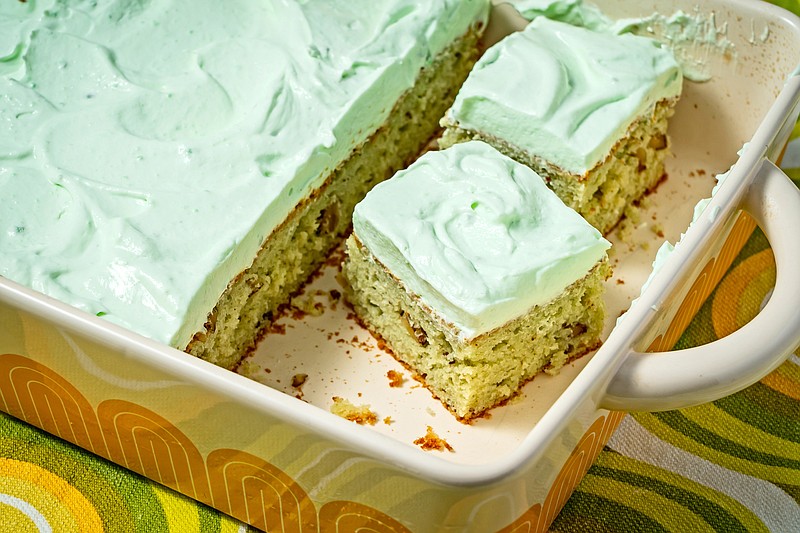 Watergate Cake. Photo by Scott Suchman for The Washington Post.

Not long ago, I channeled Howard Baker and phoned home to interview my mom.

I wanted to get to the bottom of a dessert that she whipped up when I was a teenager growing up in Minnesota--Watergate cake--and that I started making myself this year, the 50th anniversary of a break-in at a Washington landmark that led to the downfall of a president.

What did Dorothy Sietsema know, and when did she know it?

Mom kind of stonewalled me. "I don't know exactly when I started making it," she says of the sheet cake with the creamy, Shamrock Shake-green topping and moist, walnut-veined interior. "You can put down the 1970s."

She was more forthcoming about its allure. "I think it looks nice because of its color. I like it because it has nuts in it." Mom made the Watergate cake for St. Patrick's Day this year, but she typically pulls out the recipe, written in her own hand, in summer. "The whipped cream makes it a lighter dessert, and the pale green makes you think of the outdoors." Plus, she adds, "it's easy to serve and make ahead."

My mom is the sort of cook who makes pudding from scratch and took the time to create her own version of Hamburger Helper for her kids back in the day. But like a lot of women of her vintage, the former public health nurse appreciates cutting to the chase in the kitchen on occasion.

The Watergate cake, retro as shag carpet and innocuous as the Carpenters, is all about ease. The base is a box of white cake mix, a box of instant pistachio pudding mix, 7-Up--remember, this was decades ago in the Midwest--some eggs, walnuts and vegetable oil. Basically, you open several packages, crack a few eggs, chop some "nutmeats" as the recipe reads, and stir everything together. Slide the batter into the oven for 30 minutes, and what's to stop a cake with a whiff of intrigue from rising? The topping is another box of instant pudding mix combined with Cool Whip, which explains the dessert's durability. Cool Whip is like Aqua Net in its ability to hold--not that the Watergate cake ever lasts long after it's served. One slice easily leads to another. For a cake, it's surprisingly refreshing.

The Washington Post published a recipe for the cake, similar to my mom's, in a column called Anne's Reader Exchange in 1975 and again a year later, along with a news story. "A new Watergate crisis is sweeping the Washington area, but this time only homemakers and a few business men seem to care," wrote Alexander Sullivan. "The crisis stems from the growing popularity of a recipe for a concoction called 'Watergate Cake,' which demands large quantities of powdered pistachio pudding mix."

At the time, one firm, Royal Pudding, distributed the mix in the Washington area; grocery stores were stripped of the product almost as soon as it was put on shelves, a problem preceded by a coincidental pistachio shortage. The writer went on to say the cake's origin wasn't clear, nor was the name, although he suggested the walnuts were " 'bugs' in the parlance of kids."

Back then, the owner of Watergate Pastry put a mile between the easy-breezy dessert and his shop's selections. "We haven't invented anything to which we'd attach a name like that," Harold Giesinger all but sniffed in print. "A private source may have put it together."

Joseph Rodota, author of "The Watergate: Inside America's Most Infamous Address" (William Morrow, 2018), says "the lack of answer is fitting" in the scheme of things. "The bakery, like the hotel, was quite upscale. A cake made with cheap ingredients was off-brand for a hotel known for luxury and privacy." Yet it was also part of "Watergate consumerism" that swept the country at the time, he says, noting that a retail shop in the complex sold ties with plastic bugs on them. (Rodota has tried the dessert, which the native Californian thinks of as "a pistachio version of olive oil cake.")

Not to be confused with Watergate salad, featuring crushed pineapple and miniature marshmallows along with the pudding mix, Watergate cake is as receptive as Rose Mary Woods to manipulation. Some recipes switch nuts, get their fizz from club soda or ginger ale, and incorporate coconut. The batter can take the form of cupcakes, layer cakes and Bundt cakes. The confection, paved with what some recipes call "cover-up icing," achieves a Christmas-y air with the addition of a maraschino cherry atop each slice.

"I just wanted to try to get to a more natural state" with everything-from-scratch, says Richardson. She has never had the version made the old way, but she can understand its appeal: "You get dessert to the table quickly." Also, "the name is part of our history."

I like the simplicity of the sheet cake, which keeps well in the refrigerator (remember: Cool Whip) if you're not the generous type. "When I have a party," Mom says, "I send it home with people."

Sharing is caring. Mom, you're pardoned.

The Watergate Cake made news in Washington a couple years after President Nixon resigned from office in 1974. So many people were making the dessert, whose origins are as unclear as 18 1/2 minutes of a certain missing tape, grocery stores couldn't keep a necessary ingredient--instant pistachio pudding mix--in stock.

Food critic Tom Sietsema's mother, Dorothy Sietsema, recalls making this simple cake starting in the late 1970s, and years afterward around St. Patrick's Day. "People make green things then," the Minnesota native says of the cake paved with pale green frosting. "It's pretty, and I like nuts in a cake." A cup of oil in the recipe, which also includes soda, makes for an extra-moist cake. "I never had leftovers," or reason to store it for long, she says. "I always gave it away."

Make Ahead: The cake needs to be assembled/frosted at least 30 minutes before serving.

Storage Notes: Lightly cover and refrigerate for up to 3 days.

Unsalted butter or vegetable oil, for greasing the pan

1 cup (240 milliliters) club soda or lemon-lime soda, such as Sprite

One (9-ounce) container whipped topping, such as Cool Whip

Make the cake: Position a rack in the center of the oven and preheat to 350 degrees. Lightly grease a 9-by-13-inch baking pan with the butter or vegetable oil.

In the bowl of a stand mixer fitted with the paddle attachment--or, if using a hand-mixer or whisk, in a large bowl--combine the cake mix, pudding mix, oil, eggs, soda and nuts. Beat on medium speed until thoroughly combined, about 2 minutes.

Transfer the batter to the prepared pan, making sure to scrape all of it from the bowl with a rubber spatula. Bake for 30 to 35 minutes, or until the top turns deep gold. Remove from the oven and transfer the pan to a wire rack; let cool completely before frosting, about 30 minutes.

Make the topping: Clean the bowl used to make the batter. Then, in the bowl of a stand mixer fitted with a whisk attachment--or if using a hand mixer or whisk, the large bowl--combine the whipped topping, milk and pudding mix. Beat at medium speed until thoroughly combined, about 2 minutes.

Assemble the cake: Spread the topping on the cooled cake, loosely cover with aluminum foil without touching the surface of the cake (plastic wrap has a tendency to pick up the topping) and refrigerate for at least 30 minutes before serving. 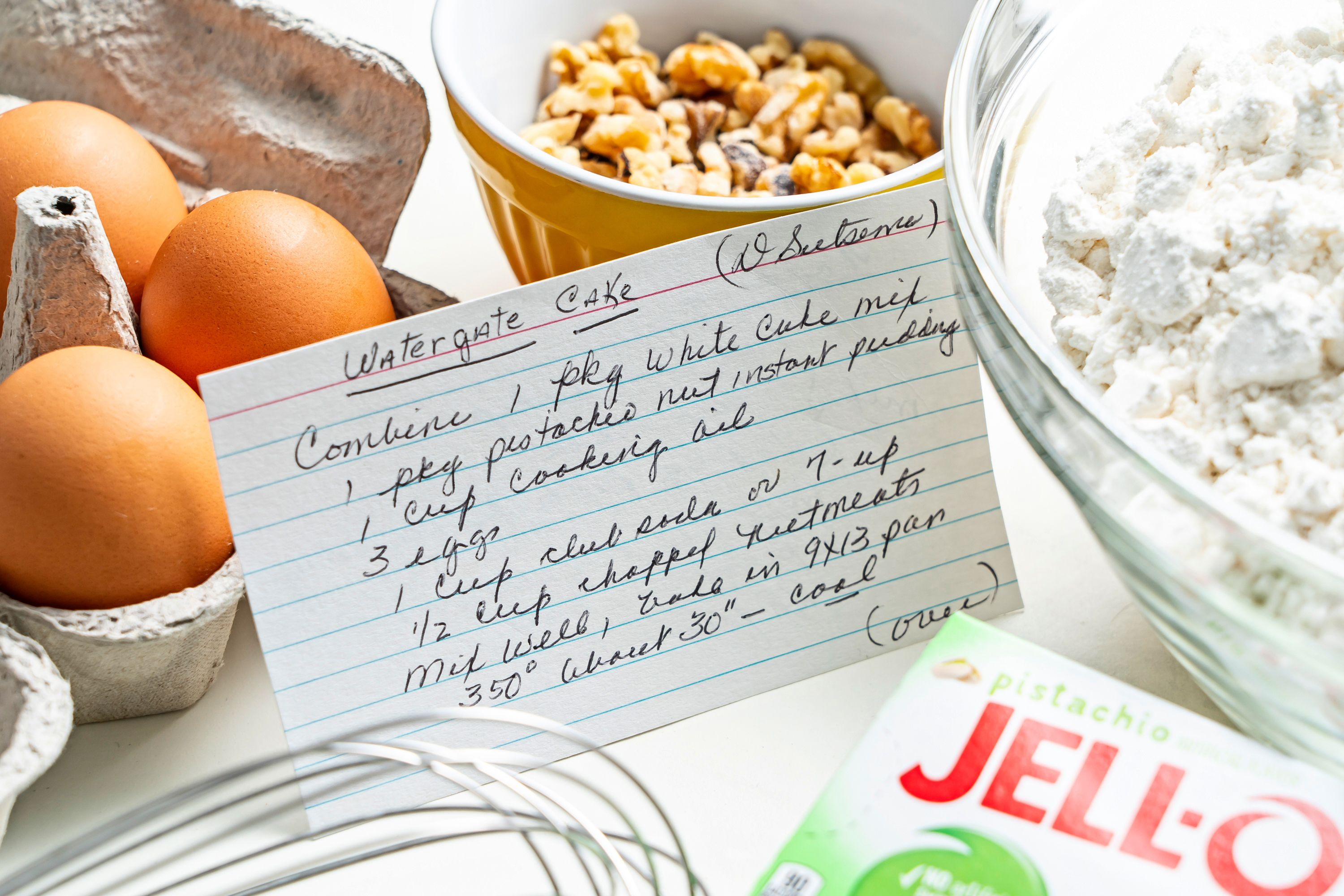 A recipe card for Watergate Cake. Photo by Scott Suchman for The Washington Post.

Print Headline: After it became a crime, Watergate became a cake