Cheesy, twice-baked potatoes honor a dad who knew what he loved 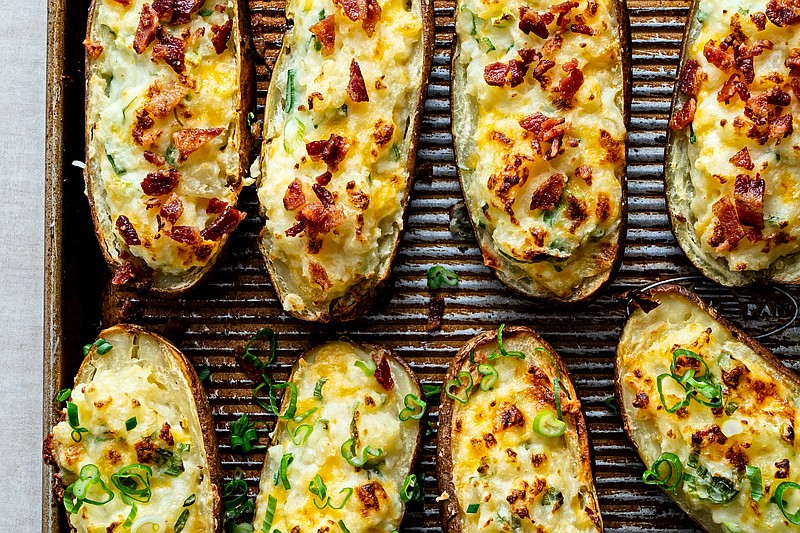 Twice-Baked Potatoes. Photo by Scott Suchman for The Washington Post.

When I was growing up, every day my mom performed what she made look like a normal task, but which I now understand to be a feat of epic proportions: She had dinner on the table for our family, unassisted by takeout, delivery, frozen entrees or my father.

Our dinners were usually thrifty and utilitarian, with lots of repeats, but holidays and birthdays--celebrations of any kind--were another thing entirely. Best of all, your birthday meant you got to choose the menu, something that felt exciting to a kid living in a world where grown-ups ruled supreme, and a parent's "because I said so" was enough of a reason for anything. You got to pick the flavor of your cake and its icing, a choice I did not make lightly.

I often asked for tacos, made with packages of Old El Paso seasoning, for parties with friends. One year, I opted for peach cobbler instead of birthday cake. For at least one birthday, I picked a chicken dish I had found in a cookbook, probably dating from the 1960s, that had canned pineapple and soy sauce in it. It seemed wildly sophisticated to me.

Dad, though, never varied the menu he wanted for his birthday or for Father's Day. No one bothered to ask him; by then, my mom knew the answer would always be the same, the menu the man enjoyed more than any other: steak, asparagus with hollandaise sauce, twice-baked potatoes and, for dessert, almond torte.

The steak--never a high-end cut--was cooked under the broiler in our old stove, and the asparagus was boiled. Mom whisked together the lemony hollandaise by hand. The torte was a complicated affair, involving a meringue and a custard filling, and the whole thing was showered with toasted, slivered almonds. (It turns out "torte" was a misnomer when I later identified it in Mom's old green "The Joy of Cooking" as "Cream Meringue Tart Cockaigne.")

The potatoes, too, were fancier than the simple spuds that usually showed up on our dinner table. Mom baked them as usual, but then scooped out the innards, mashed them and added butter and cheese before putting them back in their jackets for a final spin in the oven.

To Nick Heil, this was heaven on a plate. I'm not sure why that particular combination spoke to his soul, but it sure did. Maybe it reminded him of swanky steakhouses where he had dined in his younger days when he lived in Washington as a congressional aide. There was nothing you could call a steakhouse anywhere near us in our remote Virginia hometown, even if we could have afforded it. The meal also happened to be pretty delicious. Whatever his reasons, he must have eaten this very menu twice a year for at least 40 years.

Dad was a man of habits. Every night, when he came home from work as a small-town attorney, he would take off his shoes and tie and stretch out on our massive, sagging brown sofa. "The MacNeil/Lehrer NewsHour" blared while Dad dozed. Sometimes he would command me or my sister to adjust the rabbit ears to get better reception. When the news ended, it was dinnertime.

Consistency was his thing. He smoked Merit Ultra Lights and nothing else. Weekends were for mowing the fields and tinkering with cars, and when he wasn't on the tractor or under a hood, he was sitting on the old Morris chair in the kitchen, reading and drinking coffee.

I don't mean to say that Dad was a simple guy, or incurious. He loved learning about space exploration and watching classic movies. He could recite all kinds of poetry. And he relished trying unfamiliar foods, devouring the Indian curries I would bring home from college, savoring the sophisticated French bistros I would take him to in Washington. It's just that Dad was, always, himself.

That he always wanted the same celebration dinner--lather, rinse, repeat--never struck me as odd. It was just Dad being Dad, unchanging, always there, as much a fixture in my life as that old brown sofa or the mole over my right eye, just like Dad's. I knew that any time I called, he would greet me with the same question: "Hey, kid, whadda ya know good?" I knew he would always have advice for me, solicited or not (usually the latter). I knew he loved me beyond measure.

Dad was unchanging, until he wasn't. He died in 2014 after suffering from dementia. And since my mom followed in 2020, I've felt disoriented, like the shape of the world had shifted.

Now, as I did then, I'm almost always seeking variety in my own cooking. When I make plans for the week's meals, I'll often pull out cookbooks and scroll on my phone, looking for something new and interesting. For celebratory meals, I book tables at favorite restaurants, where I'll have dozens of dazzling options to choose from.

But I recently made Dad's favorite dinner on a whim for my husband and me, missing Dad as I blitzed the yellow sauce in the blender (unlike Mom, I opted for convenience). And as we ate, darn it if the old man didn't have something more to tell me.

I felt like Dad was still giving me advice, and it went beyond the food on our plates. Maybe, as he knew all along, it's good to find something you love and enjoy it for as long as you can.

Staff writer Emily Heil re-created her father's favorite side dish here. These classic twice-baked potatoes are creamy, cheesy and satisfying. Crisping the hollowed out potato skins in the oven isn't an essential step, but it keeps them from getting soggy once the filling is added. Once filled, the potatoes are returned to the oven to lightly brown on top. You can vary the cheeses, too; try gruyere or Swiss.

Storage Notes: Refrigerate for up to 2 days; reheat in a 350-degree oven for about 10 minutes.

4 russet potatoes (about 8 ounces each), scrubbed, dried and rubbed lightly with vegetable oil

3 scallions, both white and green parts, thinly sliced, plus more for serving (optional)

Position a rack in the top third of the oven and preheat to 400 degrees.

Place the potatoes on a large, rimmed baking sheet and roast for about 1 hour, or until the skin is browned and a fork easily pierces the flesh. Transfer the potatoes to a wire rack until cool enough to handle, about 10 minutes; leave the oven on.

Halve each potato lengthwise and place cut side up on a work surface. If the potatoes are still too hot, use an oven mitt or kitchen towel to hold them.

Using a small spoon, gently scoop out the flesh from each half into a medium bowl, leaving a 1/8-inch to 1/4-inch thickness of flesh in each skin. Don't fret if the skins tear a bit, you can still fill them. Arrange the skins on the baking sheet and return them to the oven for about 10 minutes, or until lightly crisped.

Meanwhile, mash the potato flesh with a fork or potato masher until it's as smooth as you like it. Stir in the cheese, sour cream, milk, butter, scallions, if using, salt and pepper until well combined.

Remove the potato skins from the oven and turn the oven setting to broil. Do not raise the rack. Using a towel or oven mitt, holding each skin steady on the pan, spoon the mixture into the skins, mounding slightly at the center.

Return the pan to the oven and broil for 10 to 15 minutes, or just until lightly browned on top. Remove the pan from the oven and sprinkle with the scallions and/or bacon, if using, and serve warm. 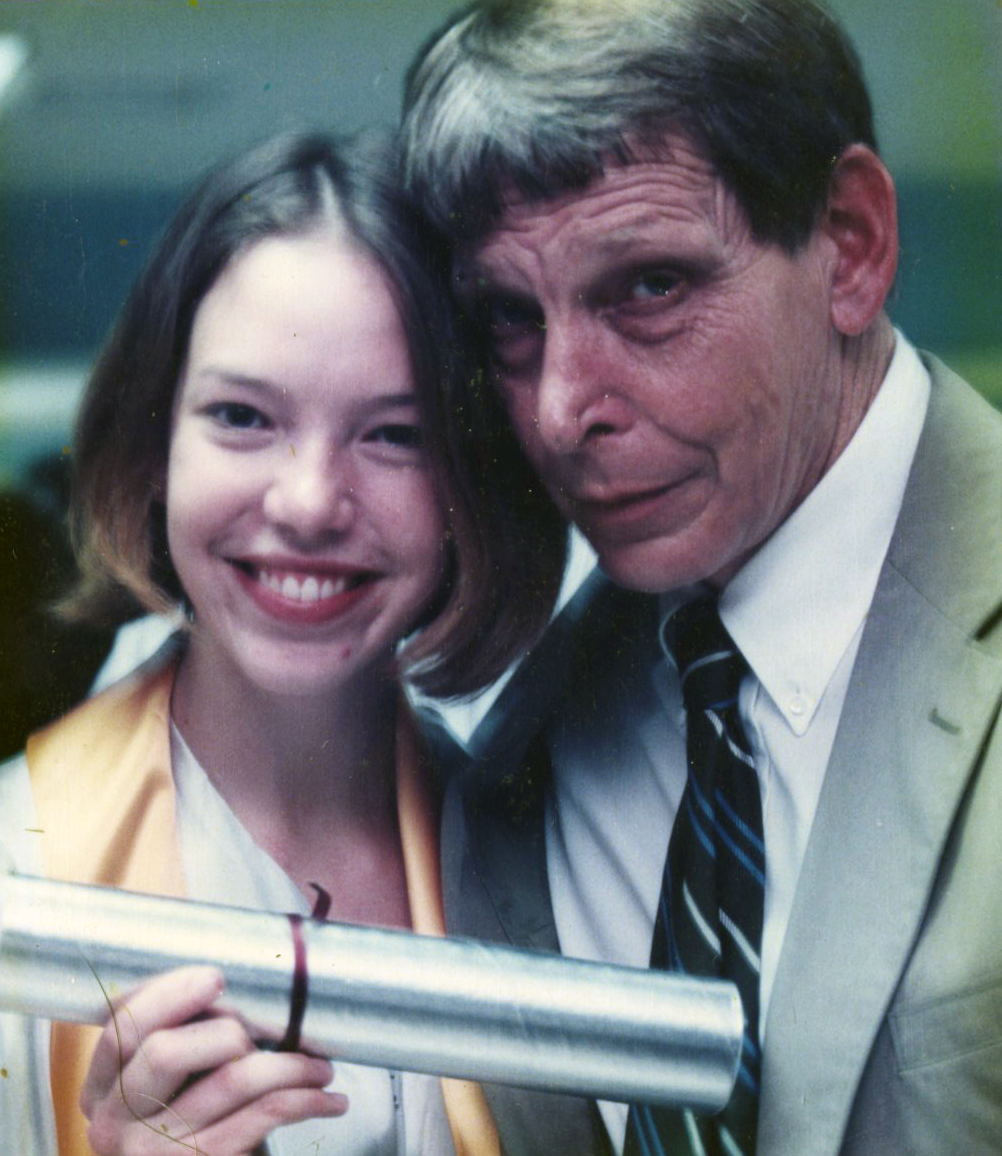 The author and her father at her high school graduation in 1995. Family Photo.

Print Headline: Cheesy, twice-baked potatoes honor a dad who knew what he loved