Running past the post office, the former county office building and on to Church Street will be this new road and sidewalk construction for East Rust Street in Linden. The camera’s view is from the edge of Kaufman St. which crosses the square. (photo by Neil Abeles)

Street and sidewalk upgradings have begun for four downtown streets in Linden which start at Courthouse Square.

The work is being done under a $500,000 Texas Department of Agriculture Main Street grant for a project of street and sidewalk reconstruction.

The street areas are:

The bid amount for this work is $378,086 with Contech Contractors as contractor and Hayter Engineering as engineers. Linden's amount to contribute is $75,000, according to City Manager Lee Elliott.

The project is an accomplishment of two administrations starting in 2020 when then City Manager Bob Swisher and then Mayor Clarence Burns brought the grant opportunity to Main Street Director Allie Anderson.

"We gained the assistance of Grant Works, which is a grant consulting firm, and they did the rest for us," Anderson said. She noted a major part of the grant's purpose is creating sidewalk and street access for the disabled.

"We were able to get the street work as part of the access help for the handicapped."

City manager Elliott and city secretary and assistant city manager Anderson gave their future visions for the project as the sidewalk work got under way at the Wright Patman home last week.

"Linden's search for this TDA grant shows investment in what is considered the heart of our community," Elliott said, "and it extends walkability from our downtown to one of our key citizen's historic residence, the Wright Patman home. That's going to be helpful for our tourism efforts."

Elliott added that the two block repair of Rush Street will take pressure off streets in need of repair which are included in the coming $6 million bond issue. The bond issue challenge is to rebuild all downtown streets.

For her part, Anderson focused on the appreciation and enthusiasm the new renovation could bring to the community.

"With this downtown reconstruction project, we are just starting on our very first project of street renovation, and we hope that people will see things getting really better," Anderson said. "It's going to give us all confidence the we can do this together."

"We realize raising taxes to pay street repair is a burden. But this downtown reconstruction project was one of the few actions we could take. Now, once things get rolling this summer, we hope the visible outcome it brings will allow the public to see this as the best course and a worthwhile investment." 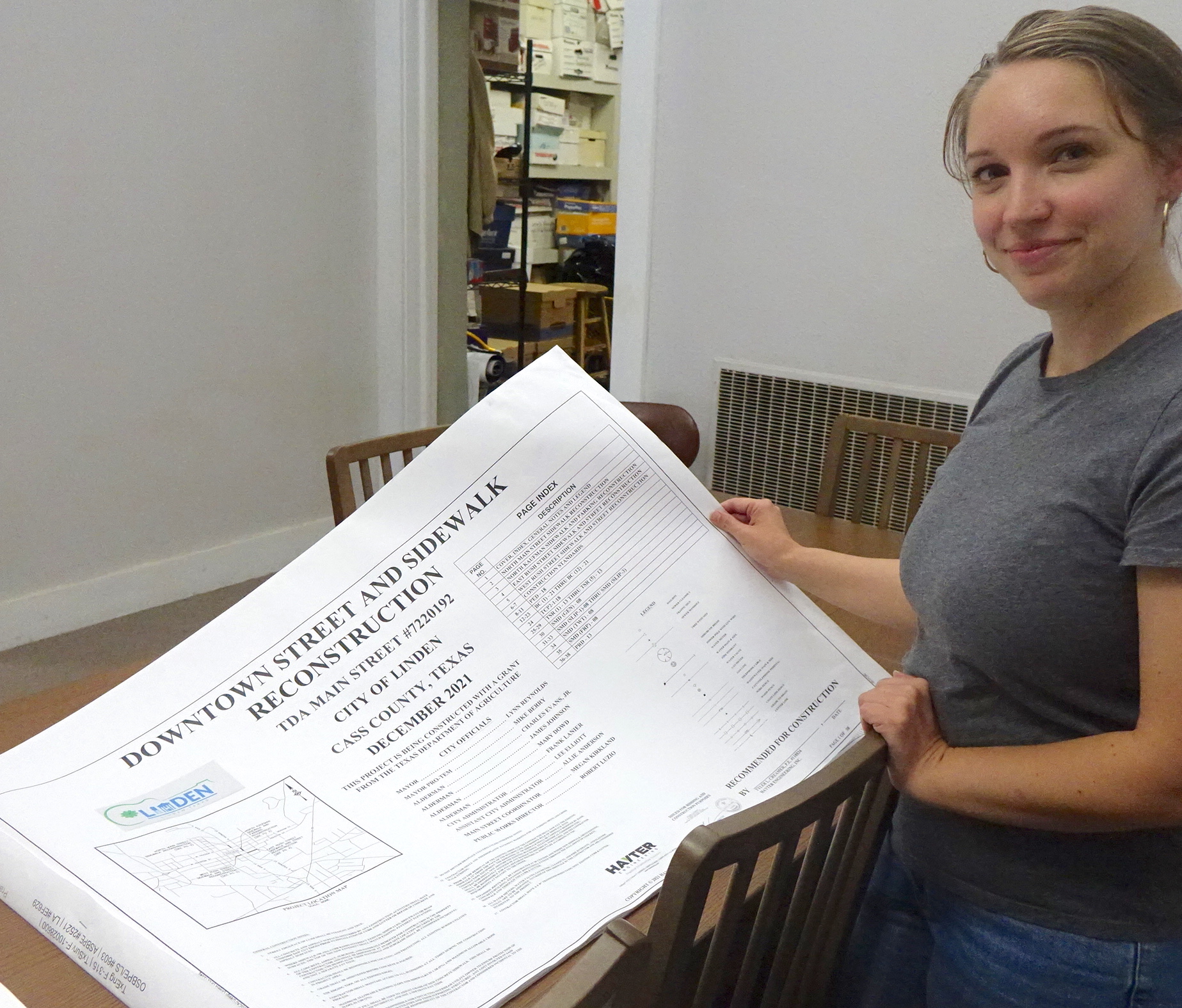 Linden Assistant City Manager Allie Anderson takes up the engineering drawings of a Texas Department of Agriculture Main Street grant for a project of street and sidewalk reconstruction that has broken ground and is starting. (photo by Neil Abeles) 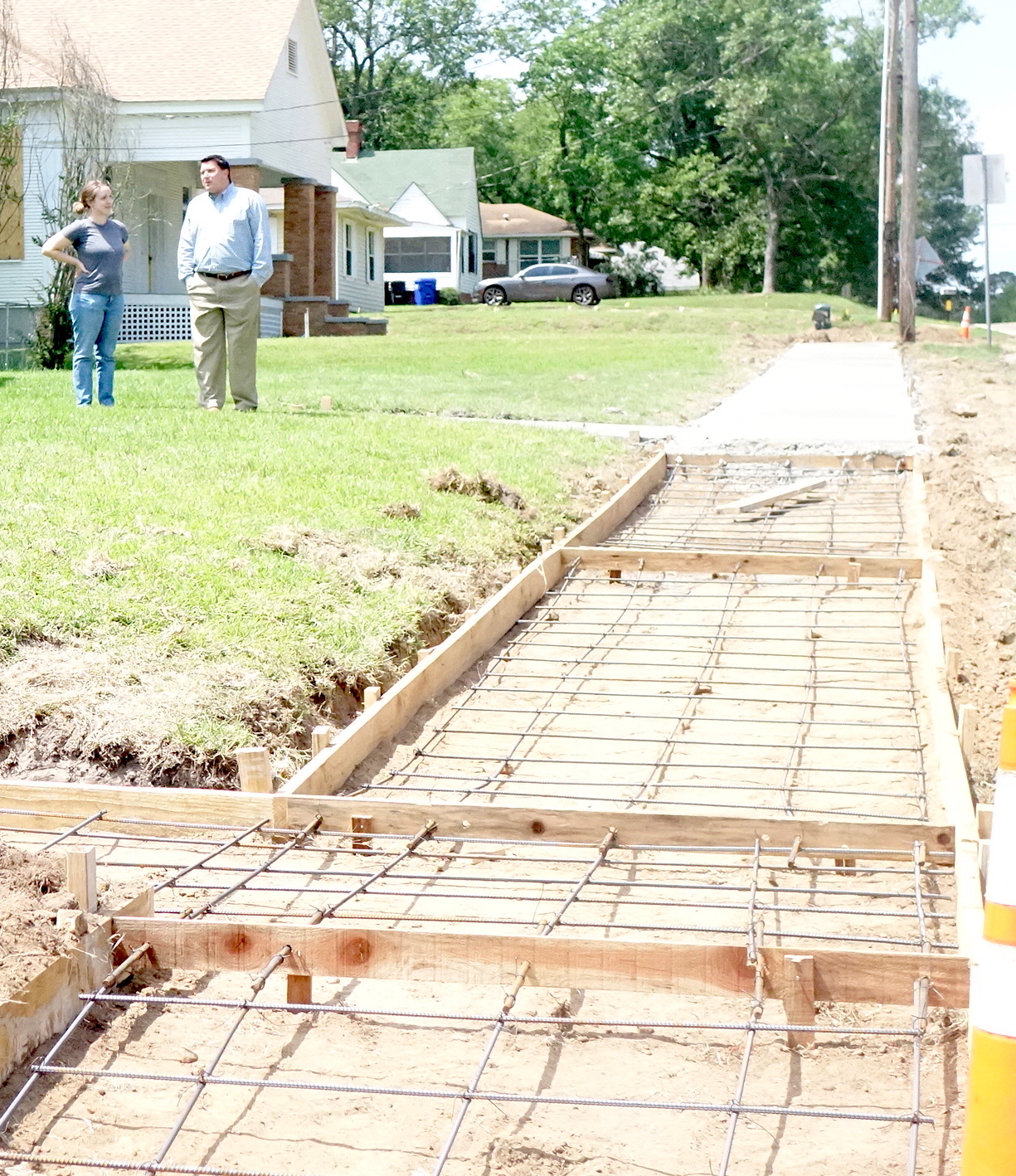 Assistant City Manager Allie Anderson and City Manager Lee Elliott are standing away from the new sidewalk but closer to the Wright Patman home on North Main in Linden. (photo by Neil Abeles)

This is West Rush Street in Linden, which will have its road material ripped up, re-concreted and stabilized through a Texas Department of Agriculture Main Street grant. Accessible sidewalks will also be built on the left side. (photo by Neil Abeles)