WITH POLL | Recession fears grow. Just how high is the risk? 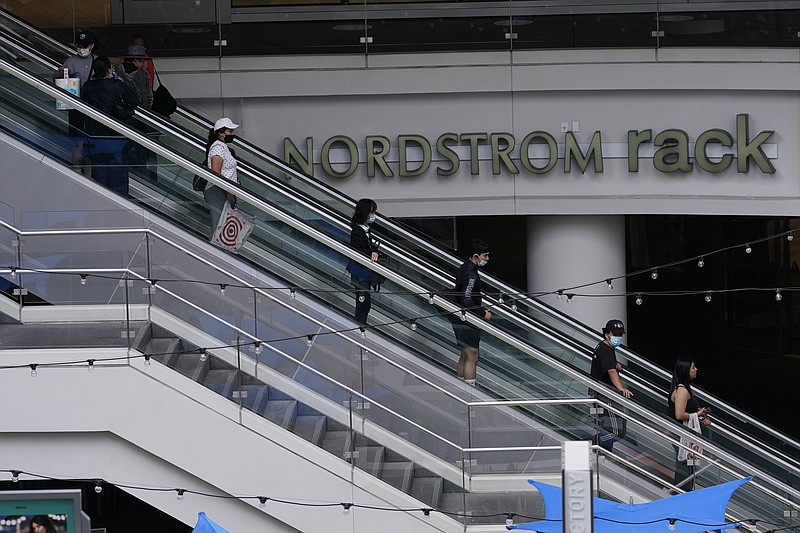 People wear face masks as they shop at the Nordstrom Local DTLA downtown Los Angeles on Tuesday, March 15, 2022. Inflation is at a 40-year high. Stock prices are sinking. The Federal Reserve is making borrowing much costlier. Home sales are down, and mortgage rates are up. And the economy actually shrank in the first three months of this year. Is the United States at risk of enduring another recession, just two years after emerging from the last one? For now, even the more pessimistic economists don’t foresee any imminent downturn, at least not before next year. (AP Photo/Damian Dovarganes)

WASHINGTON -- Inflation is at a 40-year high. Stock prices are sinking. The Federal Reserve is making borrowing much costlier. And the economy actually shrank in the first three months of this year.

Is the United States at risk of enduring another recession, just two years after emerging from the last one?

For now, most economists don't foresee a downturn in the near future. Despite the inflation squeeze, consumers -- the primary driver of the economy -- are still spending at a healthy pace. Businesses are investing in equipment and software, reflecting a positive outlook. And the job market is still booming, with hiring strong, layoffs low and many employers eager for more workers.

Among the signs that recession risks are rising: High inflation has proved far more entrenched and persistent than many economists -- and the Fed -- had expected: Consumer prices rose 8.6% last month from a year earlier, the biggest annual 12-month jump since 1981. Russia's invasion of Ukraine has exacerbated global food and energy prices. Extreme lockdowns in China over COVID-19 worsened supply shortages.

Fed Chair Jerome Powell has vowed to do whatever it might take to curb inflation, including raising interest rates so high as to weaken the economy. If that happens, the Fed could potentially trigger a recession, perhaps in the second half of next year, economists say.

On Wednesday, the Fed is set to raise its benchmark interest rate, which affects many consumer and business loans, by as much as three-quarter of a percentage point. That would be the Fed's largest rate hike since 1994, and it could herald the start of a period of especially aggressive credit tightening by the central bank -- and with it, a higher risk of recession.

Analysts say the U.S. economy, which has thrived for years on the fuel of ultra-low borrowing costs, might not be able to withstand the impact of much higher rates.

The nation's unemployment rate is at a near-half-century low of 3.6%, and employers are posting a near record number of open jobs. Yet even an economy with a healthy labor market can eventually suffer a recession if borrowing becomes costlier and consumers and businesses put a brake on spending.

HOW WOULD THE FED'S RATE HIKES WEAKEN THE ECONOMY?

Higher loan rates are sure to slow spending in areas that require consumers to borrow, with housing the most visible example. The average rate on 30-year fixed mortgages topped 5% in April for the first time in a decade and has stayed there since. A year ago, the average was below 3%.

Home sales have fallen in response. And so have mortgage applications, a sign that sales will keep slowing. A similar trend could occur in other markets, for cars, appliances and furniture, for example.

HOW IS SPENDING AFFECTED?

Borrowing costs for businesses are rising, as reflected in increased yields on corporate bonds. At some point, those higher rates could weaken business investment. If companies pull back on buying new equipment or expanding capacity, they will also start to slow hiring. Rising caution among companies and consumers about spending freely could further slow hiring or even lead to layoffs. If the economy were to lose jobs and the public were to grow more fearful, consumers would pull back further on spending.

DOES A SINKING STOCK MARKET HURT THE ECONOMY?

Falling stock prices may discourage affluent households, who collectively hold the bulk of America's stock wealth, from spending as much on vacation travel, home renovations or new appliances. Broad stock indexes have tumbled for weeks. Falling share prices also tend to diminish the ability of corporations to expand. Wage growth, adjusted for inflation, would slow and leave Americans with even less purchasing power. Though a weaker economy would eventually reduce inflation, until then high prices could hinder consumer spending. Eventually, the slowdown would feed on itself, with layoffs mounting as economic growth slowed, leading consumers to increasingly cut back out of concern that they, too, might lose their jobs.

WHAT ARE SIGNS OF AN IMPENDING RECESSION?

The clearest signal that a recession might be nearing, economists say, would be a steady rise in job losses and a surge in unemployment. As a rule of thumb, an increase in the unemployment rate of three-tenths of a percentage point, on average over the previous three months, has meant that a recession will eventually follow.

ANY OTHER SIGNALS TO WATCH FOR?

Many economists also monitor changes in the interest payments, or yields, on different bonds for a recession signal known as an "inverted yield curve." This occurs when the yield on the 10-year Treasury falls below the yield on a short-term Treasury, such as the 3-month T-bill. That is unusual, because longer-term bonds typically pay investors a richer yield in exchange for tying up their money for a longer period.

Inverted yield curves generally mean that investors foresee a recession and will compel the Fed to slash rates. Inverted curves often predate recessions. Still, it can take as long as 18 or 24 months for the downturn to arrive after the yield curve inverts. A short-lived inversion occurred Tuesday, when the yield on the two-year Treasury briefly fell below the 10-year yield as it did temporarily in April. Many analysts say, though, that comparing the 3-month yield to the 10-year has a better recession-forecasting track record. Those rates are not inverting now.

Powell has said the Fed's goal was to raise rates to cool borrowing and spending so that companies would reduce their huge number of job openings. In turn, Powell hopes, companies won't have to raise pay as much, thereby easing inflation pressures, but without significant job losses or an outright recession.

"I do expect that this will be very challenging," Powell said. 'It's not going to be easy."

Though economists say it's possible for the Fed to succeed, most now also say they're skeptical that the central bank can tame such high inflation without eventually derailing the economy.

Deutsche Bank economists think the Fed will have to raise its key rate to at least 3.6% by mid-2023, enough to cause a recession by the end of that year.

Still, many economists say any recession would likely be mild. American families are in much better financial shape than they were before the extended 2008-2009 Great Recession, when plunging home prices and lost jobs ruined many households' finances.

Print Headline: WITH POLL | Recession fears grow. Just how high is the risk?