Carrie Underwood amps up her wattage with new album, tour 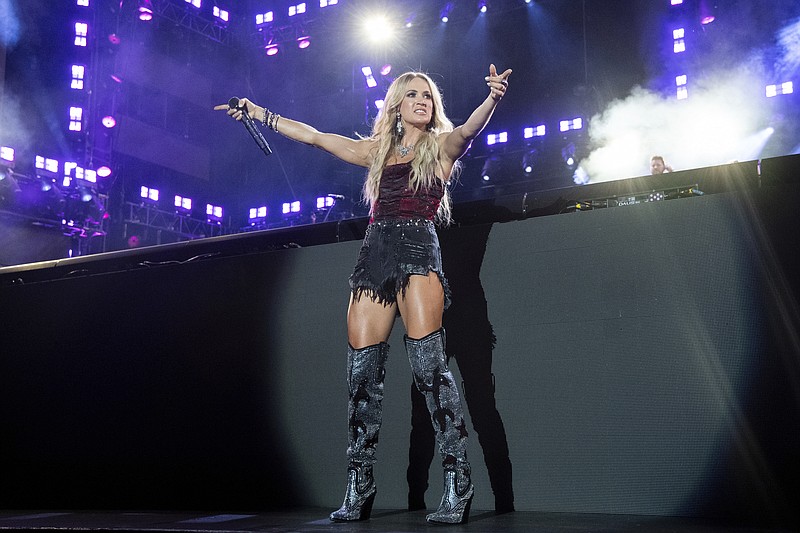 NASHVILLE, Tenn. -- No one can accuse Carrie Underwood of underdressing -- or underdelivering -- when the country superstar puts out her latest record "Denim & Rhinestones" during the same weekend of CMA Fest and giving tens of thousands of fans a stadium-sized performance.

After a two-year hiatus because of the COVID-19 pandemic, the 49th annual music festival returned in-person last Thursday with crowds of fans getting autographs, going to fan club parties and watching artists from morning to late night at stages all around Nashville, Tennessee. An estimated 80,000 people attended the festival over four days.

"This is the first time I've ever put an album out during this crazy, awesome week, and it was definitely by design," Underwood said. "Everybody's going to be out and about, you know, having fun anyway. Like, why not? Why not make a thing out of it and choose this week to release 'Denim & Rhinestones'?"

Denim and rhinestones were definitely the fashion along the streets of lower Broadway as massive crowds mingled downtown, popping in and out of bars, honky-tonks and musical stages. Underwood opened a pop-up site where fans could see her custom-made gowns and stage costumes from past award show performances and put themselves in scenes inspired by songs from her new record.

"We have different vignettes for people to be able to go and take pictures in," she said. "There's denim walls. There's like pink champagne. It looks like a giant bathtub with bubbles kind of in it."

The multiple Grammy-winner put on several performances during the week of her album drop, including an Amazon Music livestream, a fan club party, two performances at the Grand Ole Opry and headlining Saturday night's CMA Fest at Nissan Stadium.

Underwood's stage shows have only gotten bigger and more elaborate over the years, incorporating 360-degree stages, surprise guests, huge video productions, rising stages, smoke, confetti and wind. Her next tour starts Oct. 15 and hits 43 cities, with direction from Barry Lather, who has worked on tours for Mariah Carey, Usher and Rihanna.

Fresh off a Las Vegas residency where she learned acrobatic skills to swing over the stage, Underwood said she just keeps trying to find new ways to entertain a crowd.

"I think it is so important to be able to just maximize the entertainment value when you're putting on a show," Underwood said. "People don't want to go to a concert and just see somebody stand up there and stand behind the microphone and just sing. And I feel like, as a woman, I can get away with all the wardrobe changes and just really take all the things that I love to do and just multiply them by a million and put on a good show."

Underwood's last two records showed off another side of her singing, including a gospel album and a holiday music record. But she's back to her style of country pop, with tinges of '80s synths and rock, on her ninth studio record that is tailored for a summer festival season that is just rebounding after the pandemic.