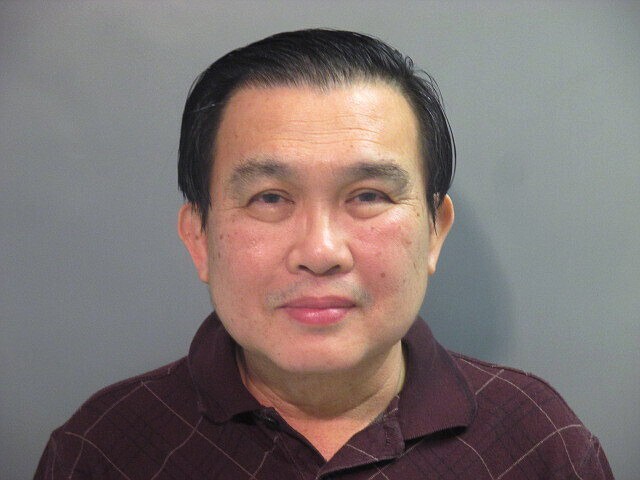 A photo provided by the Washington County jail shows Simon S. Ang, a former electrical engineering professor at the University of Arkansas, Fayetteville who was charged with multiple counts of wire fraud. (Washington County sheriff's office via AP)

FAYETTEVILLE -- A former professor at the University of Arkansas was sentenced Thursday to one year and a day in prison after pleading guilty to one count of lying to the FBI about patents filed in China listing him as a co-inventor.

Simon Saw-Teong Ang, 65, of Fayetteville, was ordered to self-report to a designated prison by July 20. He will remain free until then.

The sentencing followed a January plea agreement in which prosecutors agreed to dismiss 55 counts of wire fraud. Prosecutors alleged that Ang failed to disclose to government funding agencies -- and to UA -- his ties to China and Chinese companies. Most of the wire fraud allegations had to do with Ang's pursuit of NASA and U.S. Air Force research grants.

At Ang's request, U.S. District Judge Timothy L. Brooks, who presided over the sentencing hearing, said he would recommend that Ang be sent to the low-security federal prison in Texarkana, Texas.

After serving the prison sentence, Ang will be on supervised release for one year. He was also fined $5,500.

Brooks had the authority to impose a different sentence but opted to follow the proposed sentence for Ang included in the plea agreement. The deal with prosecutors specified that Ang could withdraw his guilty plea if Brooks didn't accept the agreement.

On Thursday, Brooks noted that, although Ang was not violent and had no criminal history, the charge to which he pleaded guilty was serious.

"I sincerely apologize to this court for my conduct and I take full responsibility," Ang said when allowed to speak in court. "I appreciate and thank the supports of my family, my attorneys and friends during this difficult time."

According to court documents, 24 patents in China were filed under Ang's name or Chinese birth name.

The University of Arkansas, Fayetteville, where Ang worked as a professor, required employees to promptly furnish to the university "full and complete" disclosures of inventions, and university policy provided that it -- not individual inventors -- would own all inventions created by those subject to the policy, according to a news release from the U.S. Attorney's Office for the Western District of Arkansas.

Despite this requirement, Ang didn't disclose his Chinese patents to the university and, when interviewed by an FBI agent, lied about his involvement in the inventions, according to the news release. Specifically, when asked whether his name would be listed as "the inventor" of numerous patents in China, Ang denied being the inventor, despite knowing he was.

While Ang's conviction had to do with Chinese patents and a false statement about them, broader issues of Chinese influence were raised in earlier court filings and also remarks made by an FBI official Thursday.

Prosecutors pursued a case against Ang as part of the broader China Initiative, a federal effort launched in 2018 under the administration of President Donald Trump to target Chinese attempts at stealing trade secrets.

A November 2020 statement from the Justice Department's Office of Public Affairs described "more than 10 cases in which the trade secret theft had some alleged nexus to China," and called academia "one of our most vulnerable sectors" to exploitation by the Chinese government.

But critics of the China Initiative included hundreds of academics who signed on to letters asking for an end to the effort, stating that it harmed U.S. research and technology efforts.

The academics and others, including a group of federal lawmakers as well as the advocacy group Asian Americans Advancing Justice, also expressed concerns about whether the effort amounted to racial profiling and unfair scrutiny of Asian Americans and Asian immigrants.

In February -- after the announcement of Ang's plea deal -- the Justice Department, now under the administration of President Joe Biden, announced a shift away from its China Initiative.

At a news conference after the sentencing hearing, U.S. Attorney David Clay Fowlkes said the plea and the sentence were an example of the law being applied equally to all people.

He said the investigation and prosecution took three years.

"Certainly the strength of the case was the tremendous effort of the FBI -- in their investigation, in their gathering up of evidence," said Fowlkes. "They built a very strong case. Certainly there were some difficulties associated with the case as well. One of the most insurmountable difficulties is that much of the conduct in this case took place in a country where we do not have the ability to serve subpoenas or we do not have the ability to obtain financial records that show the facts of the case. And that was a nearly insurmountable hurdle in this case.

"However, when we look back on everything -- the strengths of the case, the difficulties associated with it, the highs and lows so to speak -- in our view, we accomplished our charge of equally applying the law in this case. And we think the sentence reflects that as well."

An FBI affidavit filed in the criminal case against Ang referenced an email exchange that included a disclosure by Ang that he is a Thousand Talents scholar and thus participating in a Chinese government program.

Such Chinese talent programs, which provide awards to researchers, have been described by FBI Director Christopher Wray and others, including U.S. Sen. Tom Cotton, R-Ark., as vehicles for recruiting researchers to siphon away technology innovation.

Ang's attorney, Drew Ledbetter, in court documents filed before the plea deal, had asked Judge Brooks to block any reference to the Thousand Talents Program, stating that it was anticipated the prosecutors intended to use Ang's "affiliation with the program with nefarious, prejudicial, inflammatory and/or politicized purposes, only."

The court documents noted that there were "no allegations in the Superseding Indictment that by Defendant's participation in the program, he committed a crime."

Ledbetter has said that Ang has been a U.S. citizen since 1986, and that Ang is Malaysian by birth.

"We do have a certain degree of compassion towards Mr. Ang, and here's why," said Dawson. "Mr. Ang has been used as a proxy by the People's Republic of China and the Chinese Communist Party for their own purposes and their own ends. The real villain in this instance is the Chinese Communist Party and the People's Republic of China, which continues to steal intellectual property from the United States.

"In this instance, which was alleged in the indictment, which was subsequently dismissed, the research that Mr. Ang undertook was funded by the United States of America and our taxpayers," said Dawson. "These were public funds. They were utilized in the course of action, in the course of conduct, by the defendant. Again, this was done because he was incentivized directly by the Chinese Communist Party, and that led to his obtaining 24 different patents in China that were alleged authored by him but were instead funded by the United States."

"I don't believe he violated the university at all," said Ledbetter. "There was nothing revolutionary about the patents, and Simon never profited from them in any way."

"I am heartbroken that he had to go to jail for this," said Ledbetter. "It doesn't feel like justice to me."

The FBI affidavit filed in the case stated that the investigation into Ang's activities involved a computer hard drive turned in to the lost-and-found bin at UA's Mullins Library.

A UA staff member, in an effort to identify the hard drive's owner, opened a file that contained an email exchange between Ang and another researcher, identified in the affidavit only as "RESEARCHER1," in which Ang disclosed involvement in the Thousand Talents Program.

"After only a couple of minutes of looking for a likely owner, I stumbled upon a document showing that one of your faculty members is a Thousand Talent Scholar," stated the email from the library employee, whose name was redacted. The email's subject line was "A Concern."

Other documents released by UA included a memo about Ang's pursuit of patents, which stated that "a cursory overview" showed UA "has been deprived of very significant revenue that would have been normally associated with the international commercialization of technologies protected and licensed under Board Policies naming Dr. Ang as an inventor while employed at the University of Arkansas."

The university recommendation to fire Ang accused him of misappropriating intellectual property "of the University" for his own benefit.

Ang was accused in the firing recommendation of failing to disclose business activities and "external affiliations," leading to a conflict of interest.

The university letter to Ang also stated that "when asked about your activities in 2019, it appears that you deliberately misled University officials about the nature and scope of your outside activities, including extensive private business activities related to your University employment."

UA spokesman Mark Rushing, in a statement Thursday, said the university is "pleased" that Ang "is being held criminally accountable for his unlawful conduct," going on to praise the FBI and U.S. Attorney's Office "for their dedicated work."

The sentencing hearing "underscored Dr. Ang's failure to disclose his extensive involvement with outside interests and his violations of University policies," including his patent filings in China, Rushing said.

"Dr. Ang's failure to disclose his activities induced the University to pay him his salary over a number of years and deprived the University of intellectual property. We are continuing to assess whether any additional steps are appropriate with regard to Dr. Ang," Rushing said when asked if UA planned to seek restitution from Ang.

Letters submitted to the court on behalf of Ang portrayed him as devoted to his family and his work at UA.

He "always provided for his family and is a very responsible, caring person," wrote Susan Ang, the former professor's ex-wife after a divorce finalized in 2007.

She wrote that she met Ang when she was a UA freshman in 1979 and that the couple married the next year.

Simon Ang earned a bachelor's degree from UA in 1980 and began working at the university in 1988 as a researcher and professor, according to the Justice Department.

Susan Ang served as the legal custodian for her ex-husband upon his release on bond in May 2020, and in her letter she wrote that he stayed in her home under house detention.

The couple's three adult children include two with "high level security clearances" in jobs with the Navy and the Justice Department, she wrote.

Her ex-husband "accepts his fate in light of the effect the situation could have on his family," she wrote. "He doesn't want this case to drag on forever for his children who have given their adult lives to working for our government just as he has also devoted his life to the betterment of society, from his family to his students to the community around him."

Kraig Olejniczak wrote that he worked with Ang at UA from 1991 to 2002 when both were professors, and that in 2012 he "was able to reconnect with him professionally."

"In all my years on this Earth, I do not know too many people who are as humble, kind, caring, thoughtful, and selfless as Simon," Olejniczak wrote.

Olejniczak served from 2002-12 as engineering dean at Valparaiso University in Indiana.

He wrote that Ang "is an innocent person who possesses an abundance of naivete in the area of business and relationships."

"I can definitely see how Simon could be taken advantage of without his knowledge. I have witnessed people taking advantage of him," Olejniczak wrote.