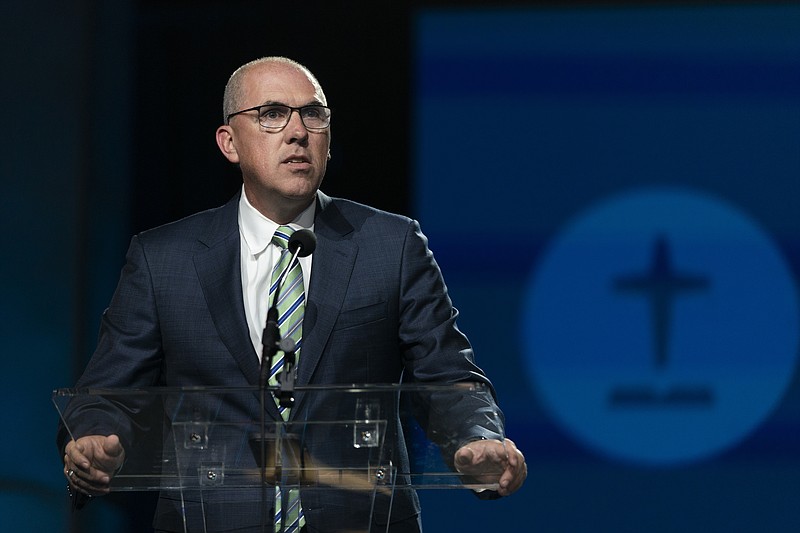 Texas pastor Bart Barber's first priority: to assemble a panel of people -- Southern Baptist leaders and experts -- to shepherd this work for the whole convention as mandated by thousands of representatives from local SBC churches.

The day after his victory in a run-off race against Tom Ascol, a Florida pastor, Barber reiterated his desire to lead by being a unifier and peacebuilder. The SBC has seen deep divisions and a steady drop in membership for more than a decade.

During a news conference Wednesday, Barber voiced his commitment to forming a new action group to help carry out the recommendations of the Sexual Abuse Task Force, which delegates overwhelmingly approved Tuesday. Delegates at the SBC's national meeting also agreed to create a way to track pastors and other church workers credibly accused of sex abuse.

On the final day of the two-day annual meeting, the convention also overwhelmingly approved two sex abuse-related resolutions. One apologized for "the harm our actions and inactions have caused to survivors of sexual abuse," and for not heading survivors' warnings. The other called for all states to criminalize sexual relationships between pastors and those in their care.

The vote on sex-abuse reforms fell short of what some survivors of abuse in Southern Baptist churches sought, such as a compensation fund for victims and a more robust and independent commission to monitor its churches' handling -- and mishandling -- of abuse. And it also met opposition from some who contended the crisis was overhyped and that it interfered with Baptist churches' independence.

But Bruce Frank, who led the task force that recommended the reforms, made an emotional plea for church representatives to accept them as their two-day annual gathering got underway. He called the steps the "bare minimum," adding it will take time to change the SBC's culture.

He challenged those who would say these steps interfere with Baptists' focus on missions, saying that "protecting the sheep from the wolves" is essential to mission.

"How are you going to tell a watching world that Jesus died for them ... when his church won't even do its very best to protect them?" Frank asked.

He acknowledged the high cost of executing these recommendations. "But it's not going to cost nearly as much as survivors have paid," he added.

Abuse survivors Tiffany Thigpen and Jules Woodson, shedding tears, said they were overwhelmed to see the messengers' hands go up in support of the task force's recommendations. "It's not perfect, but a small step and a healthy, healing step in the right direction," Woodson said.

But Christa Brown, who has advocated for more than a decade on behalf of fellow survivors of abuse in Southern Baptist settings, called the reforms disappointing. She and other survivors had sought a permanent commission to oversee compliance, whereas Tuesday's vote created a one-year term for a task force, with option to renew. She also called for a more "survivor-centric" handling of the list of accused clergy.

"I know people like happy endings, but I'm not feeling it," Brown tweeted afterward. "... I feel grief. It's better than nothing but that's such a low bar."

On Wednesday, Barber said sexual predators have used the convention's decentralized polity to turn congregations "into a hunting ground." But with systemic changes and reforms, Barber hoped sexual predators will be put on notice.

"The hunters are now the hunted," he said.

While he was reluctant to provide a timeline for action, he promised to appoint the new task force swiftly.

Barber repeatedly called for Southern Baptists to find common ground despite their differences over issues such as race and gender roles.

"I do believe we have seen some unhealthy ways recently that secular politics have dominated the conversation here in the Southern Baptist Convention," Barber said. "As Christians, we need to be engaged in politics. We just need to make sure that in the dance between theology and politics, theology leads."

Barber said "the coarseness and crass discourse out there has crept into" the SBC and into people's social media feeds. Expressing anger on Twitter and "trying to own" people instead of solving problems has only deepened divisions among Southern Baptists, he said.

"Every way I've served SBC has left scars," he said. "But this family of churches is worth it."

However, the SBC, despite its size and political influence, has yet to figure out a way to stem long-term declines in membership or in baptisms -- their key metric for religious vitality -- that began long before the pandemic disruptions.

Barber said tracking membership is complicated and results can be skewed, but noted the SBC president has little influence over it. "It's the local churches that are going to carry the gospel forward and help us grow," he said.

By any measure of the nation's political and religious spectrum, the SBC is staunchly conservative. But groups such as the Conservative Baptist Network and Founders Ministries, which Ascol has long led, have mobilized to pull the SBC further to the right, claiming that its leaders and seminaries are being influenced by liberal trends and "wokeness."

Candidates aligned with these groups were defeated for SBC president, chair of its Executive Committee and president of the influential Pastors Conference, held each year just before the annual meeting. But at least one of their preferred candidates prevailed in a narrow vote -- Victor Chayasirisobhon, pastor of First Southern Baptist Church of Anaheim, for first vice president.

But throughout the meeting, hardline Southern Baptists voiced a slate of criticisms from the convention hall floor. They derided the hiring of Guidepost for the investigation following a recent pro-Pride tweet, pushed back against allowing Saddleback Church to remain in the convention despite ordaining women pastors and more.

The Saddleback debate, which has simmered for a year, followed its ordination of three women pastors in 2021 and the recent announcement that the retiring Warren would be succeeded as lead pastor later this year by Andy Wood. His wife, Stacie Wood, would become teaching pastor.

The SBC's Credentials Committee, which reviews if churches are in good standing, initially recommended having another panel study how to interpret the denomination's doctrine on who can serve as a pastor. After pushback, the committee ultimately decided Tuesday to further study the matter itself. Most Southern Baptists agree senior pastors must be men, but disagree if the ban applies to other ministry roles, it said.

He predicted a different result in next year's annual meeting, in New Orleans, which unlike Anaheim is in the Southern Baptist heartland.

Delegate Scott Dunford, executive director of church planting at Redeemer Church in Fremont, California, said he voted for Barber because he sees him as a strong conservative who is also compassionate toward other groups. Coming into the convention, Dunford said the sex abuse crisis was foremost in his mind.

"(Barber) really seemed compassionate to the concerns of the sexual abuse victims -- in a way I didn't hear from the other candidates," he said.

But Dunford doesn't believe appointing women as pastors will help alleviate the problem.

"Every denomination has a sexual abuse problem -- even those that have women pastors," he said. "Anywhere you have a large group of people interacting, you're going to have wolves trying to manipulate the situation."

The Rev. Clint Sullens, pastor of Faith Baptist Church in Monroe, Georgia, said he cast his vote for Tom Ascol because "he is scripturally focused," which is needed now.

"But, I'm not discouraged or disappointed at where we are right now," he said. "We had great men to choose from."

Sullens is hopeful the denomination will come together especially to prevent abuse and better care for survivors. He believes uniting on critical issues is possible.

The delegates also defeated a proposal to defund the convention's public-policy arm, which has long been a target of critics complaining it isn't conservative enough. Supporters said the Ethics and Religious Liberty Commission will be needed more than ever given the anticipated state battles if the Supreme Court overturns the Roe v. Wade decision that legalized abortion. 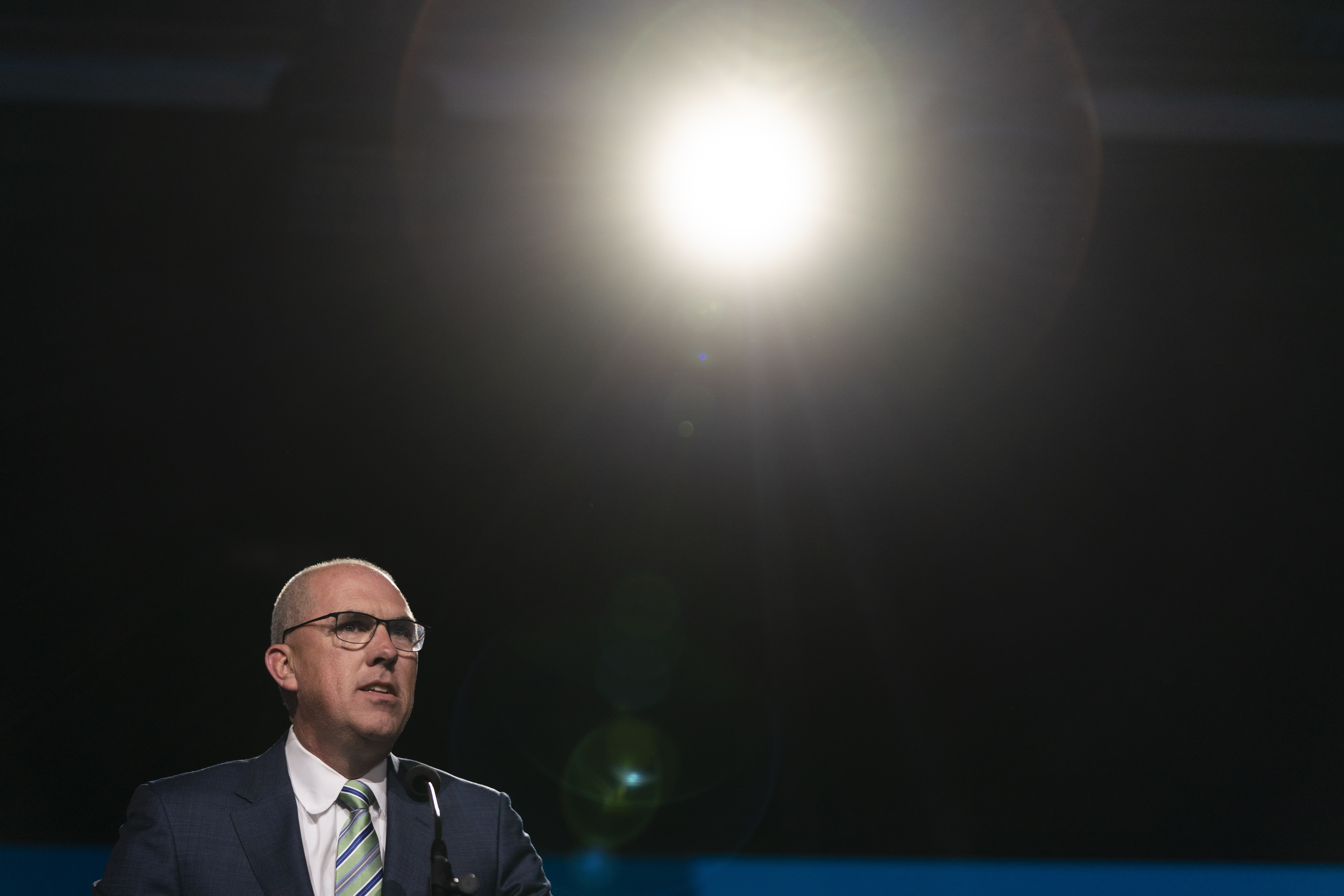 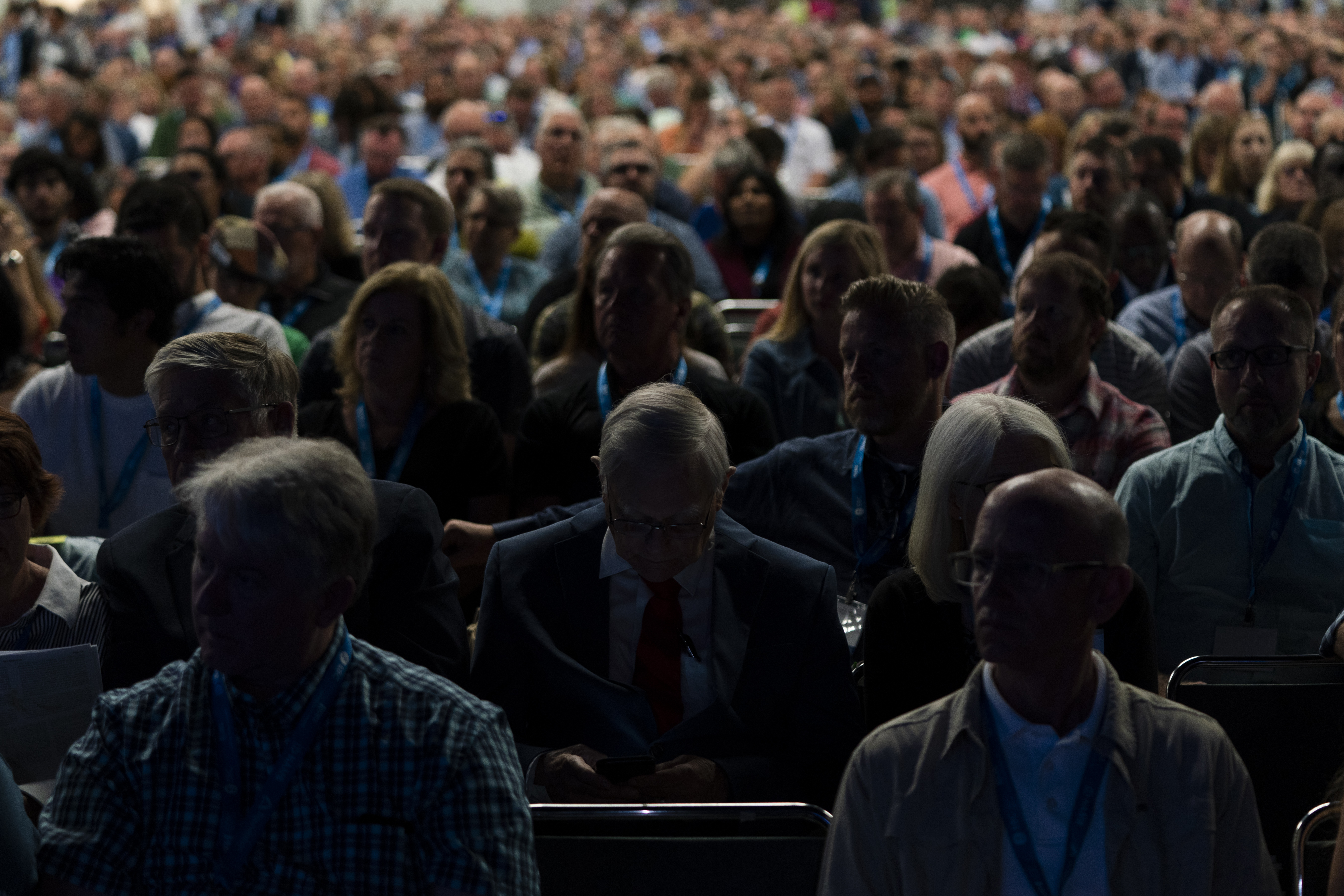 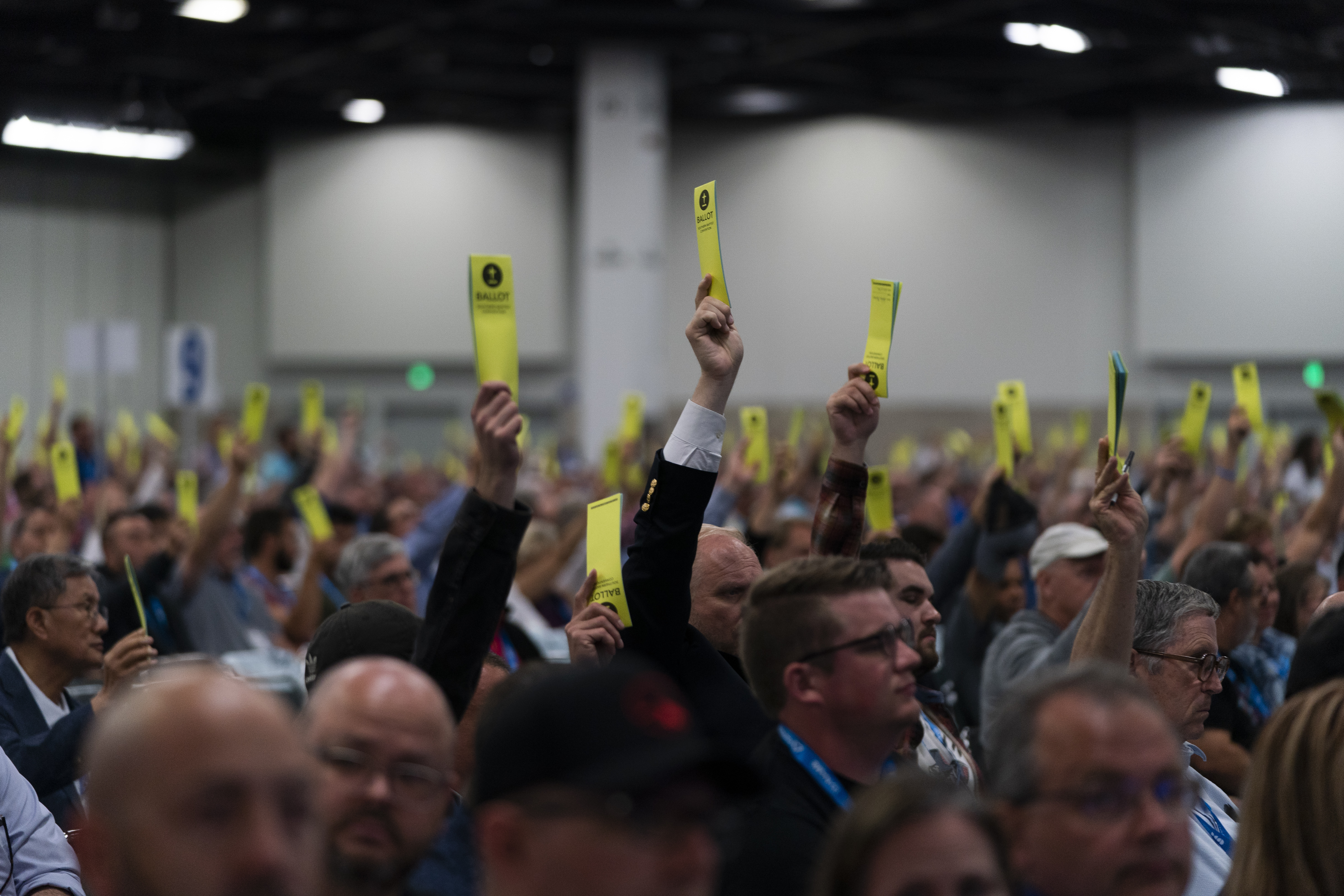