Gone But Not Forgotten: Families reunite, rededicate memorials to ancestors 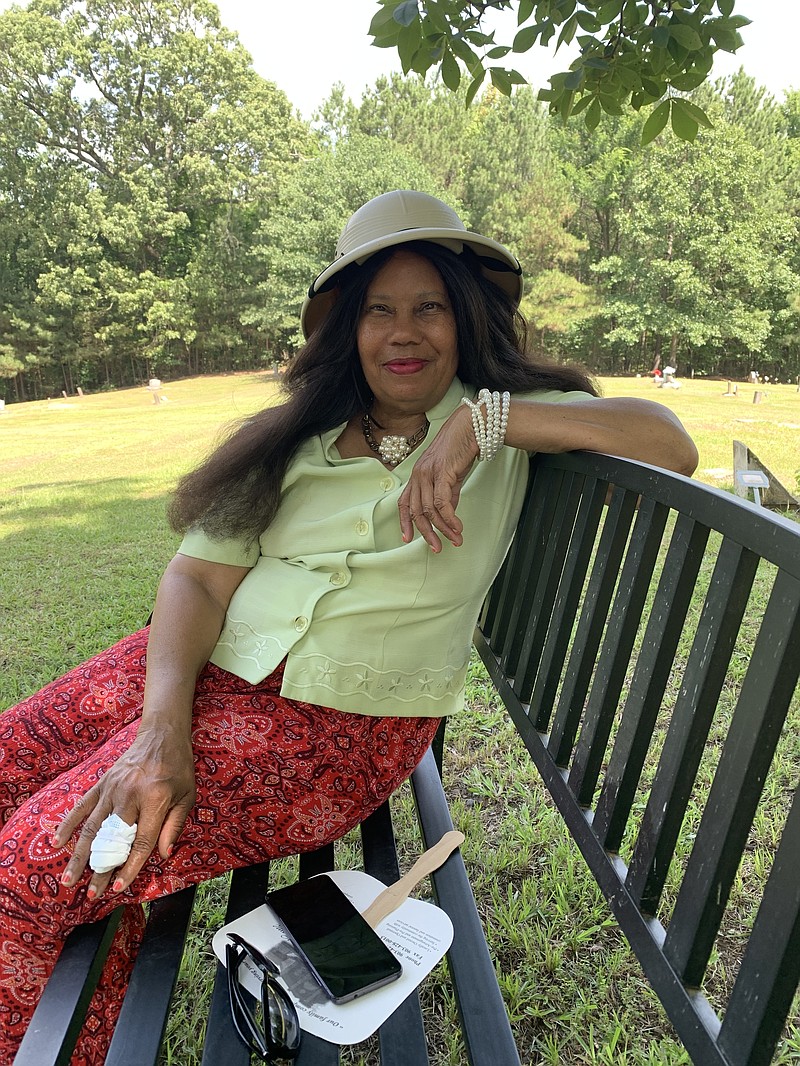 Juanita Ellis discusses her family history Thursday, June 16, 2022, at Pleasant Hill Cemetery in New Boston, Texas. Ellis said being at the cemetery is not just about honoring dead relatives, but also being with family. (Staff photo by Mallory Wyatt)

NEW BOSTON, Texas --For the Ellis and Allen families, generational cemeteries are places to reconnect with the past while looking to preserve history.

The families are preparing for their inaugural cousin reunions. The first was Thursday at Pleasant Hill Cemetery, where the Ellises have a family plot, and the adjacent Pleasant Hill Missionary Baptist Church.

The Ellis name comes from Texas politician Richard Ellis (1781-1846.) According to Texas State Cemetery archives, Richard Ellis signed the Texas Declaration of Independence and was a senator for the Republic of Texas.

Juanita Ellis gave the Gazette a brief tour of the cemetery. She said her ancestor was an enslaved person owned by Richard Ellis.

"My great-great grandfather went wherever Richard went," Juanita Ellis said. "There's a photo of him waiting outside the courthouse for Richard because he wasn't allowed to go inside."

Ellis said being at the cemetery wasn't just about honoring dead relatives, but also being with family.

"My family would hang out here and enjoy each other's company," Ellis said. "We would also clean it, and if we weren't cleaning- then we were placing flowers."

During a family service at the church, Regina Ellis Oddowe spoke on how she and cousin Zona Ellis Gardener began to work together to document the enslaved persons interred at the cemetery.

"For the past two years, we have been communicating," Oddowe said. "I asked her how she got these (names of the deceased), and she said, 'I went to the library, I went to the county courthouse and I lookedd at some of our cemetery records.'"

From there, Oddowe and Gardener began to piece together the history of family members who had been lost to time.

Oddowe said Pvt. Joseph B Delaney, a Buffalo Soldier, lies in the cemetery.

"Delaney out there, he was a runaway slave from Tennessee," Oddowe said. "He joined Grant's army before the Emancipation Proclamation. Before Lincoln got into office, he was fighting for freedom he didn't have. That's the important part. He was fighting, putting his life on the line for something he didn't even believe was going to happen."

Because of Oddowe and Gardener's efforts, the Texarkana Museum of Regional History has presented the family with an award for their excellence in preservation.

"It's just amazing what you've accomplished," museum curator Jamie Simmons said. "It's a great example of what a family can do to preserve and share their own legacy."

According to the Library of Congress, even though President Abraham Lincoln issued the Emancipation Proclamation in 1863, some Texans continued to practice slavery for another two years.

On June 19, 1865, Maj. Gen. Gordon Granger arrived in Galveston and announced the end of legalized slavery. The date is commemorated by Juneteenth, which became a federal holiday in 2021.

"My mom, dad and daughter are buried here," she said.

Ellis, whose daughter died seven years ago in a car accident, said she decorates her daughter's marker with beautiful things that light up and spin so that she can feel more connected with her when she visits.

"This is our history," Alonzo C. Ellis Jr. said. "We must maintain what we do have and go forward with what we continue to have."

On Sunday, the Allen family will hold a reunion service at Union Hill Baptist Church in Lewisville, Arkansas. The ceremony will include recognition of 14 enslaved Americans buried at Union Hill Cemetery. 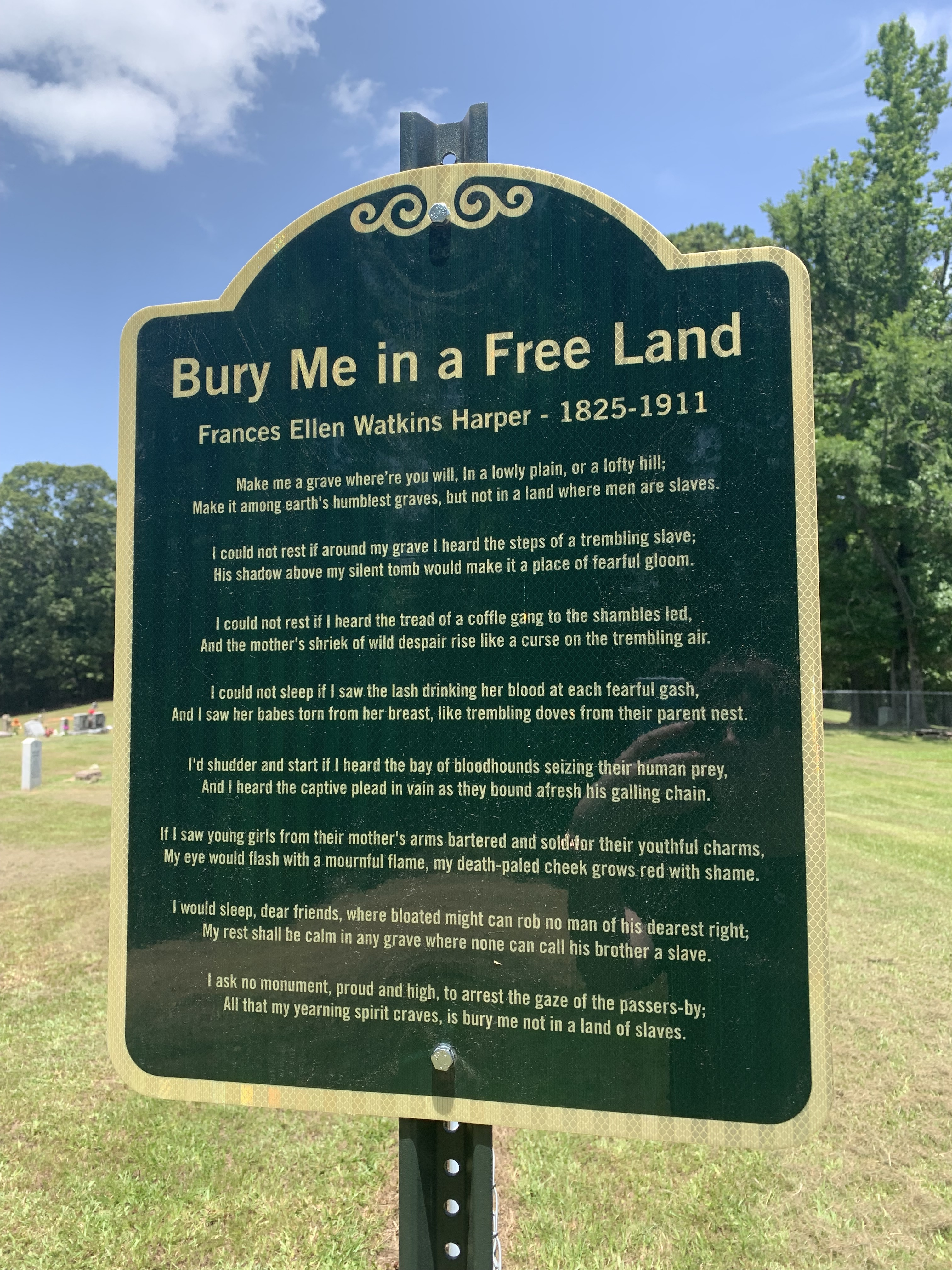 "Bury Me in a Free Land," a poem by Francis Ellen Watkins Harper, is displayed Thursday, June 16, 2022, at Pleasant Hill Cemetery in New Boston, Texas. (Staff photo by Mallory Wyatt) 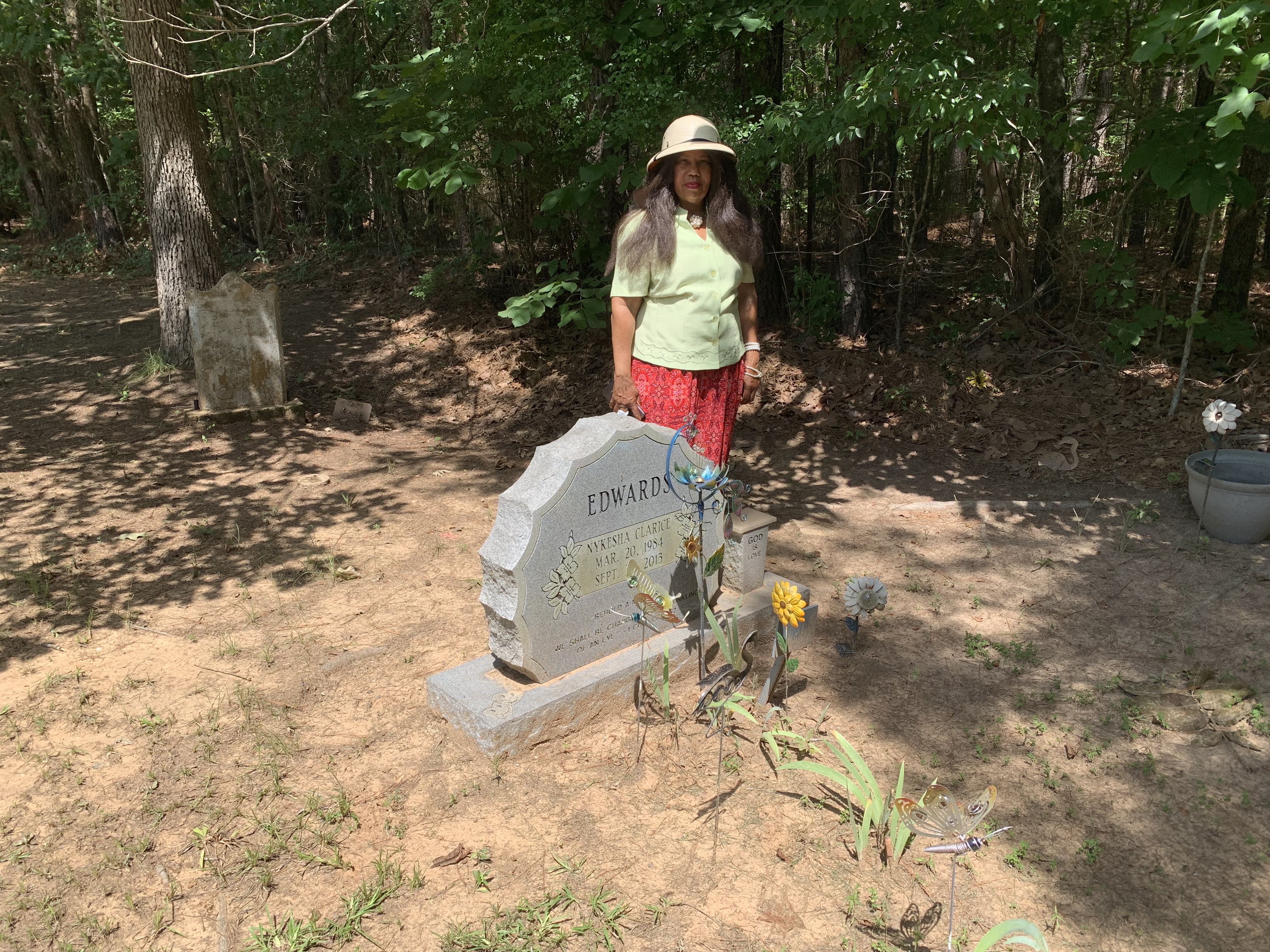 Juanita Ellis stands by the grave of her daughter, Nykesha Clarice Edwards, on Thursday, June 16, 2022, at Pleasant Hill Cemetery in New Boston, Texas. Ellis said she decorates her daughter’s marker with beautiful things that light up and spin so that she can feel more connected with her when she visits. (Staff photo by Mallory Wyatt) 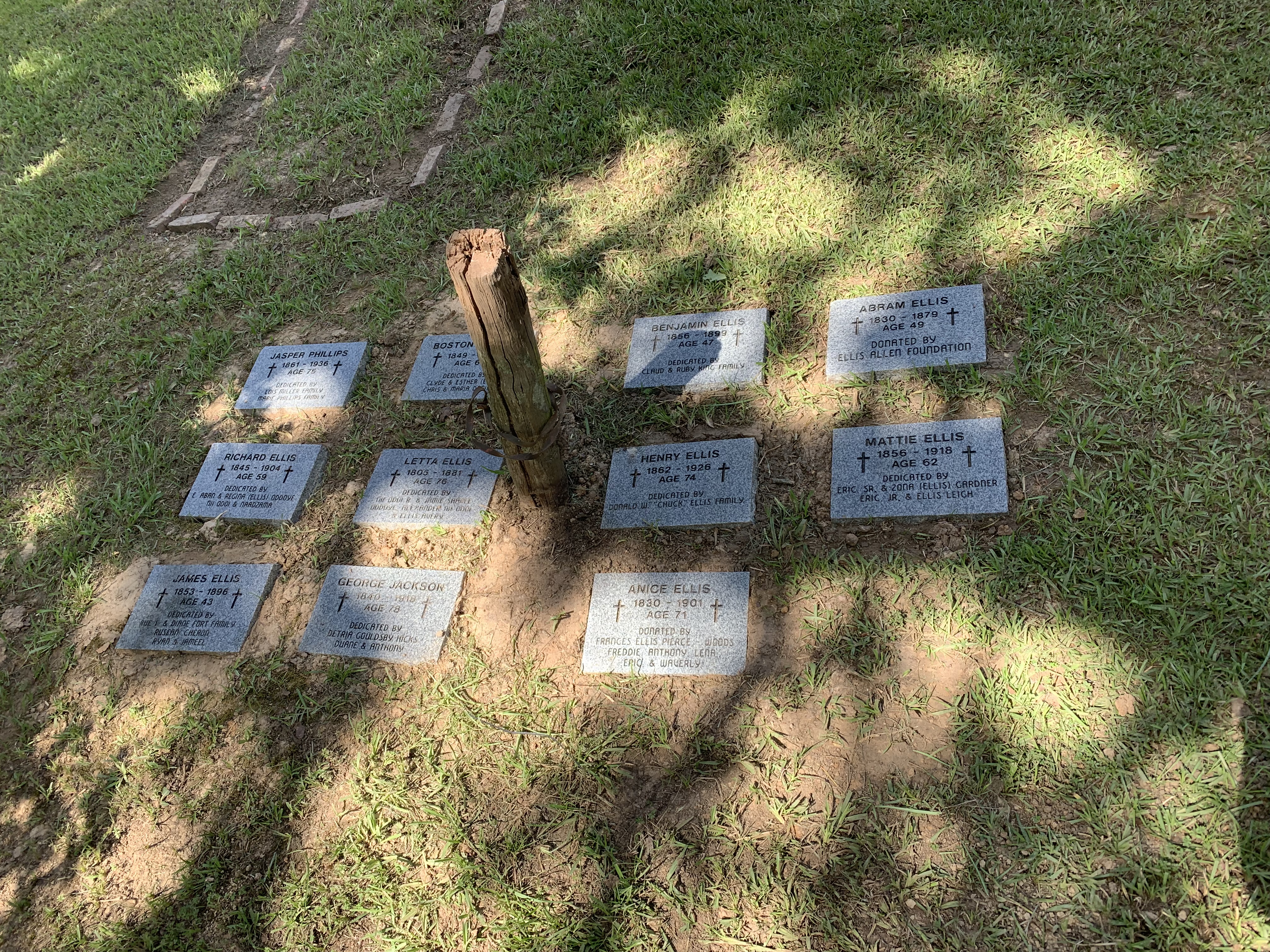 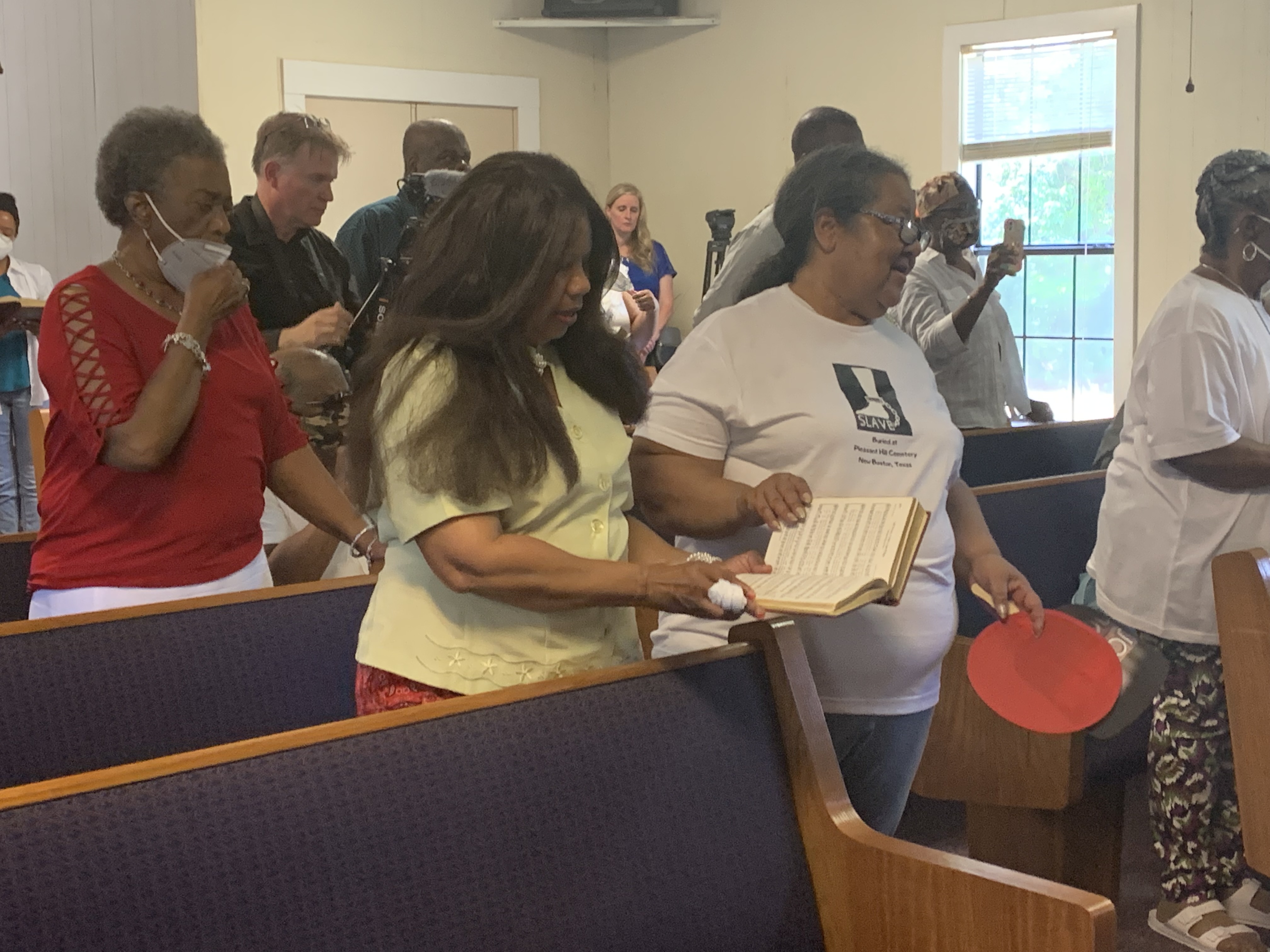