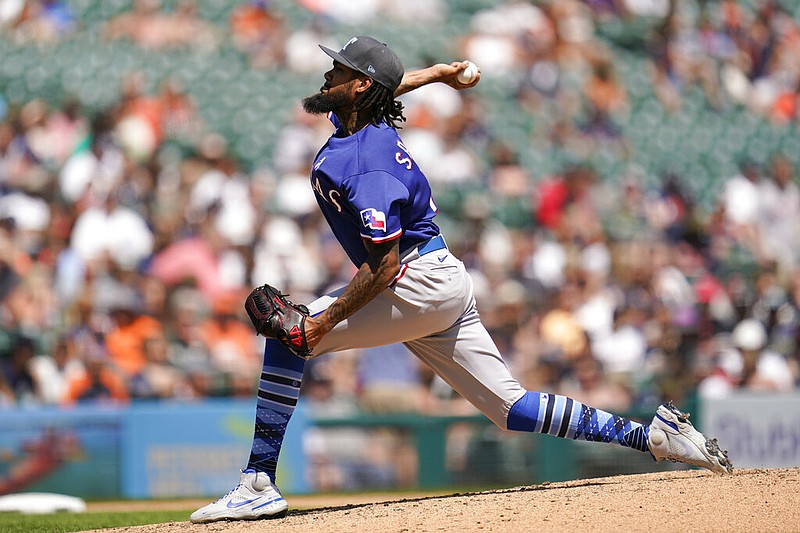 DETROIT -- Robbie Grossman homered and drove in four runs as the Detroit Tigers beat the Texas Rangers 7-3 Sunday to split the four-game series.

The Tigers and their league-worst offense scored five or more runs in consecutive games for the first time this season. Detroit had lost six straight before winning 14-7 Saturday.

"Any time you hit, it brings a lot of energy to the ball club," Tigers manager A.J. Hinch said. "This is the brand of exceptional baseball that everyone has expected from us for a long time."

Hinch had to watch most of the game from the clubhouse -- he was ejected by home-plate umpire Jansen Visconti in the third inning after Grossman was called out on strikes.

For the second day in a row, the Rangers hit a homer in the first -- this time, it was Corey Seager -- only to let Grossman homer during a three-run reply in the bottom of the inning.

"This really feels like a missed opportunity," said Rangers manager Chris Woodward, whose team won the first two games by a combined 10-1. "We had a ton of momentum after the first two games, and we were playing against a team we feel like we should be very competitive against.

"This was a series we could have won and really made some noise."

Dane Dunning (1-5) walked Victor Reyes to start the inning, then hit Harold Castro before Grossman slugged his second homer in 24 hours and second of the season.

"This feels really good," said Grossman, who is hitting .213. "I made some adjustments and I'm finally doing some things to help the team win. We played two good games and got two good wins."

Nathaniel Lowe's RBI single made it 3-2 in the fourth, and Tigers bench coach George Lombard took out opener Drew Hutchison after Marcus Semien's two-out single in the fifth.

Alex Lange (4-1) walked Seager before Adolis Garcia tied it with a hit.

Detroit regained the lead in the bottom of the fifth. A single, a walk and a pair of force outs at second base left the Tigers with two on and two out. Rookie Riley Greene drew a walk, loading the bases and bringing Dennis Santana out of the Rangers bullpen.

Detroit's other hyped hitting prospect, Spencer Torkelson, dropped a two-run single into shallow center to put the Tigers up 5-3.

"That's one of the breaks of baseball," Woodward said. "Santana makes a great pitch down and away, Torkelson just gets a touch on it and they get two runs."

Torkelson scored on a fielder's choice in the eighth to make it 6-3 and Grossman added an RBI single later in the inning.

Detroit's bullpen took over at that point, only allowing one walk in the final four innings. 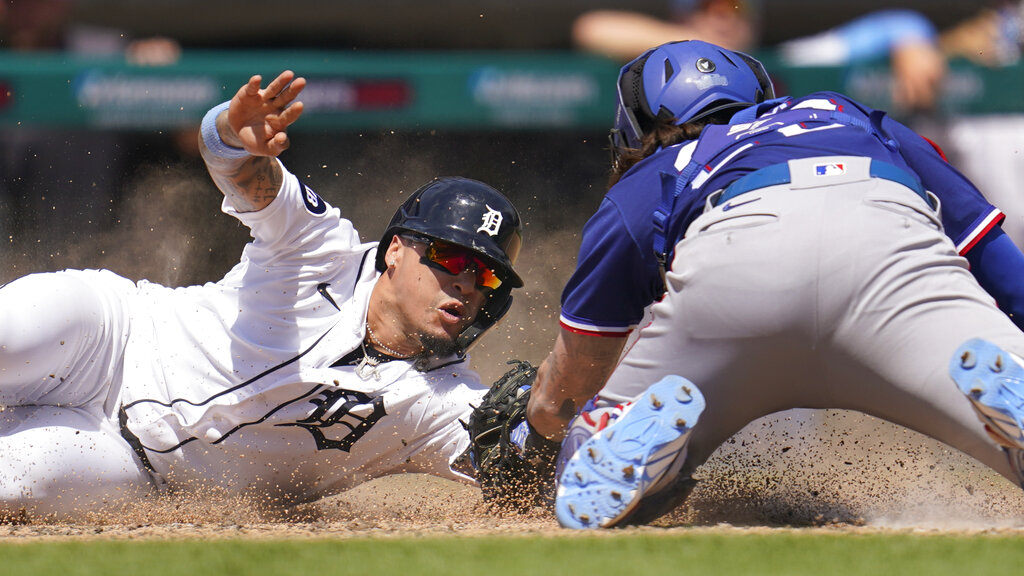 Detroit Tigers' Javier Baez slides safely to score ahead of the tag of Texas Rangers catcher Jonah Heim at home plate in the fifth inning of a baseball game in Detroit, Sunday, June 19, 2022. (AP Photo/Paul Sancya)