Republicans bet their conservative policies will win over voters, roll over Democrats 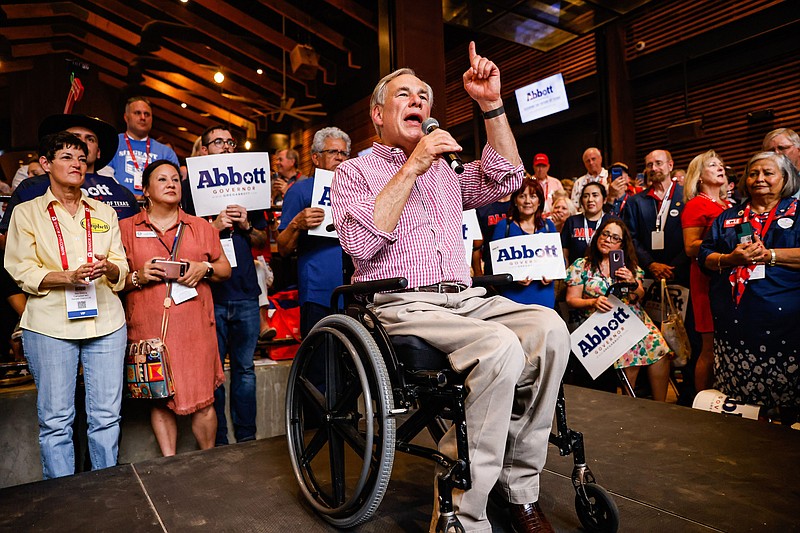 HOUSTON -- Even with the specter of a Nov. 8 general election with more moderate voters, Republican Texas House Speaker Dade Phelan is strident in his support of the rash of conservative legislation approved by lawmakers last year and signed by Gov. Greg Abbott.

He said lawmakers were told that legislation approved last year, including strict anti-abortion laws, a law allowing people to carry a gun without a permit, a controversial elections measure and border security initiatives would "alienate those who were gravitating towards Republican Party."

"Tell me about those bills that aren't God, country and family," Phelan said during a reception at the Texas GOP Convention. "They embody those three elements. I feel pretty good about November and pretty darn good about what we did in the 87th Session to attract those people who just want personal freedom."

Staying true to conservatism, even the Trump-style variety, was an overriding message at the Texas Republican Party Convention that wrapped up Saturday in Houston. It's a winning formula, leaders and delegates said. And if Republicans are victorious in November, they promise that more conservative legislation is on the way.

In election seasons past, it was typical for conservative Republicans to inch from their hard-right perch and ease toward the middle. Now, in the era of former President Donald Trump, Texas Republicans see no need to appeal to what they suggest is a mythical middle. Instead, they cling to the red meat issues that dominated their primary process, where the state's most extreme activists are dominant.

Rice political scientist Mark Jones said some GOP red meat issues, like border security and regulating transgender sports, could resonate with more moderate voters. But other issues could turn off other voters.

"I'm less convinced that's true for issues related to extreme positions on abortion and Second Amendment rights," Jones said of Republican confidence about the November elections. "The ace in the hole that Republicans have is that the economy is in dire straits. That's probably what gives Republicans some of their hubris. It's the sense that things are going so poorly for Joe Biden that they don't have to worry as much as they might have to if things were going very well for Biden."

Meanwhile, Democrats are hoping to derive campaign energy from the backlash to GOP policies that restrict abortions, promote the proliferation of guns, curbs mail-in voting, targets transgender residents and builds walls along the nation's southern border with Mexico.

If history is a guide, Texas Republicans have the advantage. Democrats haven't won a statewide race since 1994 and Republicans enjoy a structural advantage in the electorate. They are aggressive in their recruitment of Latino residents in South Texas, a key strategy in growing the party's mostly white base.

Republicans are also favored to win in November because of the unpopularity of Biden and the headwinds that have developed over inflation and high gas prices. Even in strong economic times for consumers, the party with control of the White House and Congress nearly always have deep losses in midterm elections.

During the convention, elected officials and delegates said Republican policies that focus on God, family and freedom will make the difference with voters. It's a formula GOP candidates are using to woo voters in South Texas, which is historically a Democratic Party stronghold.

"If you're a Hispanic guy in South Texas, If you're driving a pickup truck, if you work in the oil field and do bird hunting on the weekends and these lunatics want to bankrupt we want to work with kids at school and destroy your family, I know we are going to see South Texas turned bright red," Sen. Ted Cruz said in a convention speech.

Delegates and party leaders agreed that it was important to push Republican policies, even those that Democrats and the media have dubbed too extreme.

"I just want a fair race because I truly feel in 2020 there was some shady business that occurred, even in Texas," said Gloria Wiggins, an information technology program manager from Alvin and one of the few Black delegates at the convention. "We overcame it, but I truly feel like we need election integrity."

David Covey, president of the Texas Republican County Chair Association, said it was important to educate voters on the issues important to the GOP.

"I would perceive that that the turnout is going to be really high in November," Covey said. "We see some trends that are positive. It's all about educating and making sure that people understand that their values align with the Republican Party."

Lawmakers are already looking toward the next legislative session.

Lt. Gov. Dan Patrick told convention delegates that he will bring back legislation to stiffen penalties for voter fraud.

"We are going to restore voting illegally from a Class A misdemeanor to a felony," Patrick told convention delegates. He said he wasn't "pointing fingers" at the House for not passing such legislation, but he was kind of doing just that.

"We passed gender modification surgery two times. It never got a hearing," Patrick said. "I will pass it again and again and again until it passes because it's child abuse."

Patrick said he would also work to ban taxpayer-funded lobbyist in state government.

Meanwhile, Republicans are expected to crush Democrats in November.

"Texas Republicans are fired up. They're excited to be the crest of the red wave that's going to start in Texas and sweep across this nation," said Judy Nichols, chairwoman of the Jefferson County Republican Party. "We believe in God, family and country and that we are leading the way because freedom is a God-given natural born human right."

"The nation is counting on us for the last line of defense," said Coppell's Kit Whitehill, president of the Texas Federation of Republican Women. "America is counting on Texas Republicans and we must deliver." 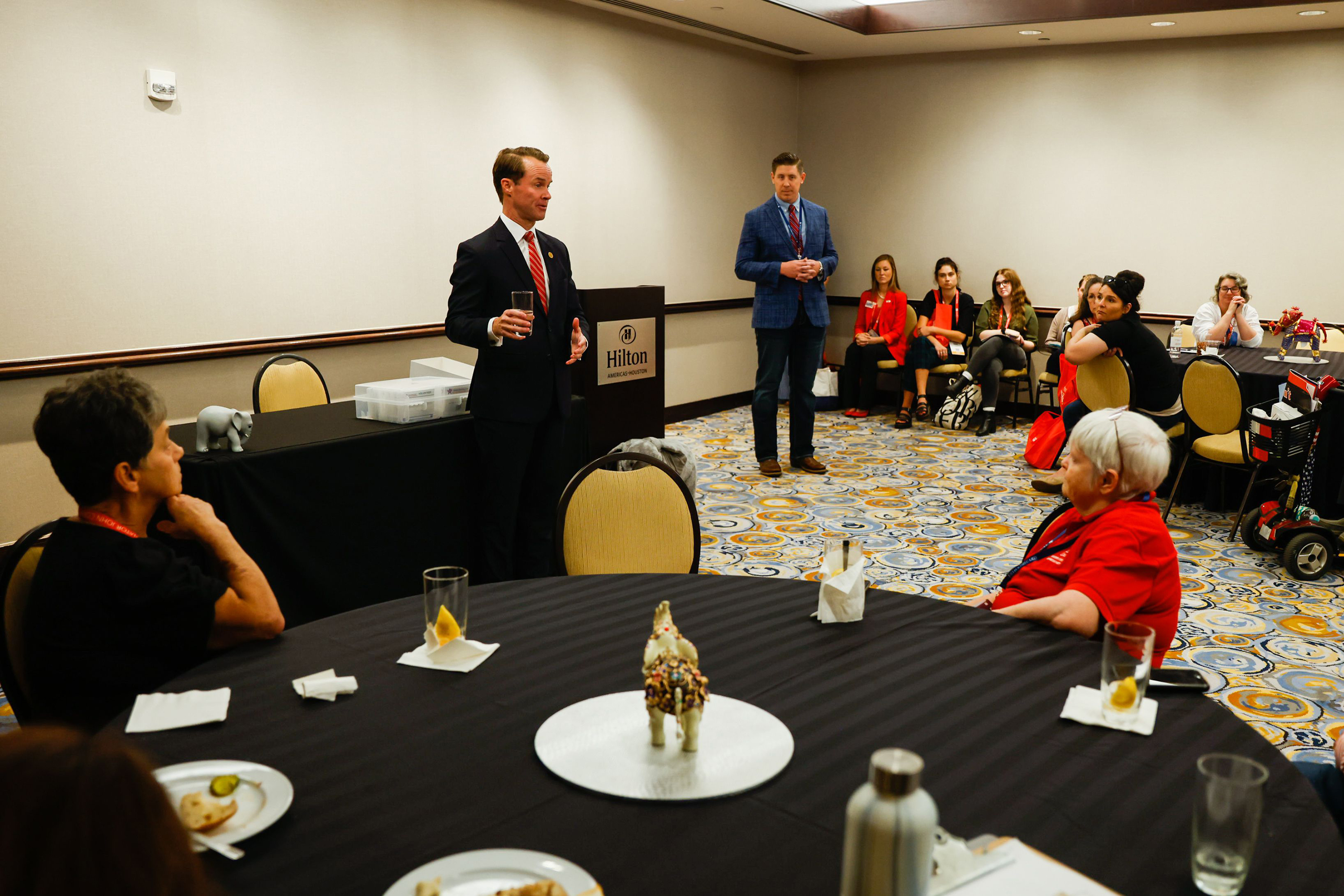 Speaker of the Texas House of Representatives Dade Phelan addresses the audience during a TRCCA reception at the Republican Party of Texas State Convention at the Hilton Hotel in Houston on Thursday, June 16, 2022. (Lola Gomez/The Dallas Morning News/TNS) 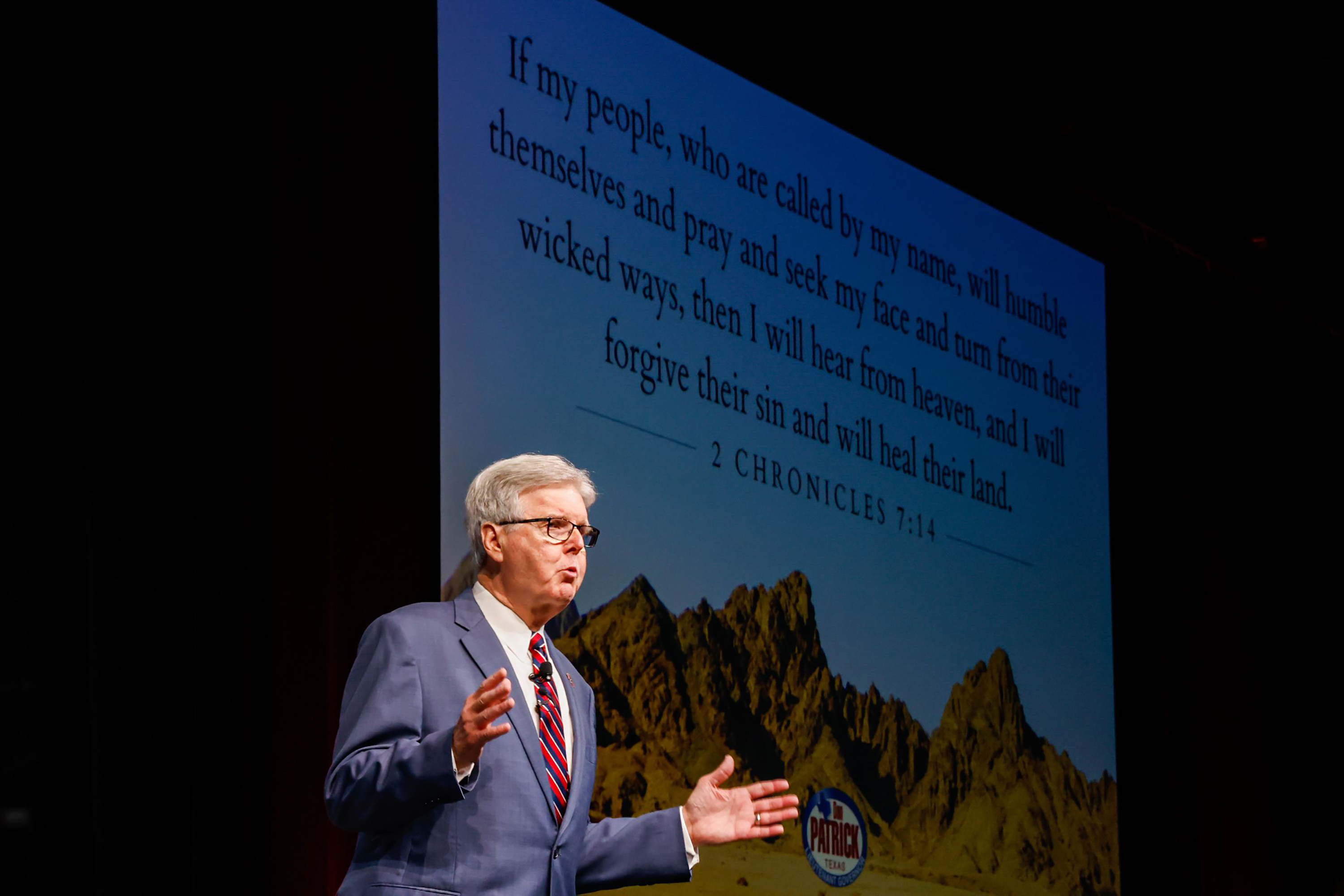