'That made no sense to me': Frustration, miscommunication put house on shaky ground 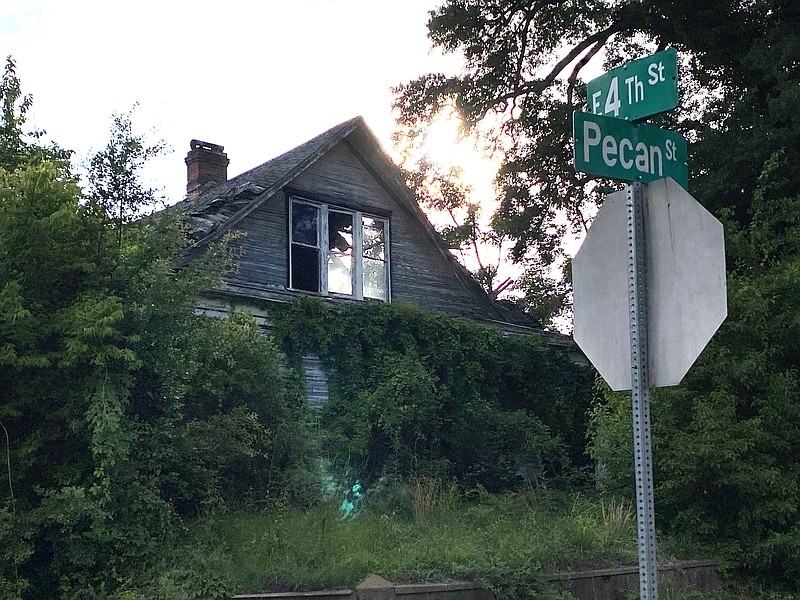 Sunlight streams onto the top floor through a hole in the roof at 403 Pecan St. in Texarkana, Arkansas. (Staff photo)

TEXARKANA, Ark. -- Every house has a story.

If the walls at 403 Pecan St. could talk, they likely would weave a tale of hopes, disappointments and miscommunication.

The front of the nearly two-story Craftsman-style structure is barely visible through the vegetation that has overtaken the property. What is noticeable are the gaping holes in the roof that let in enough sunlight to illuminate the upper level of the nearly century-old dwelling.

"It's been on our list to be condemned," said Lynn Kilgore of the Public Works department.

Still, the city's hands are tied when it comes to the house.

"Being in the historic district, we have to go through red tape," Kilgore said.

"Demolition by neglect is a pretty involved process," she said.

Among others things, historic commission ordinance prohibits demolition by neglect of any "real property designated as a historic landmark or within a historic district" and lays out a process by which property owners are notified that repairs or maintenance are needed. The Commission can apply to a court to order the work. The city is not allowed to issue a demolition permit for any such property before the commission reviews the permit application.

Given the lengthy process to raze a structure within an historic district, the city stands at a crossroads regarding 403 Pecan -- but it is not alone.

Owner Oscar Coleman of Texarkana said it was about 20 years ago when the property came to his attention. At the time, he was an over-the-road driver passing through Montana.

"It came across an app on my phone for available housing," he said.

Coleman said the single-family dwelling seemed like a good buy, since he was looking for a primary residence for himself and his two minor daughters.

The property was an inheritance shared by a group of relatives who had never seen the house, Coleman said, but were eager to sell it.

Coleman said one of the first changes he wanted to make was removal of the siding. However, since the property is in the Original City Historic District, he needed permission to make any large-scale renovations. He submitted an application with the city's historic commission, which Beck said is still on file, and soon got to work.

However, the renovation soon ground to a halt.

Coleman said a neighbor, who also was renovating a home, walked up to him one day and said something startling about requirements for homes in an historic district.

"He told me I had to paint it certain colors. That made no sense to me."

Coleman said the neighbor also informed him that only wood-framed windows could be used as replacements on the house.

As he compared what he wanted to do with what historic commission standards allowed and disallowed for the property, the costs started to mount, Coleman said.

"For a complete renovation, it would have cost about $15,000 in materials and labor."

The situation was compounded by what Coleman said was a misunderstanding of his intentions for the property, alleging that the commission had the idea he was trying to convert the house into apartments.

"It's truly a one-bedroom house, as the only room with a closet is downstairs. I was going to convert the upstairs into two rooms and a bathroom for my daughters."

There even were allegations that Coleman was scrapping the property.

"All he was doing was selling material off from the building," Beck said.

"The counters were plastic and tin counters. It was like a kid kitchen. I had never seen it before," Coleman said about some of the items that he removed from the house and junked.

"Things that have no use to me, I give it away."

Coleman said the headache of trying to rehabilitate the house while navigating historic district standards and suspicions became a burden, especially as he tried to find time for the work during the short periods he was off the road.

"It's a messed-up deal, because I couldn't make the historic commission meetings to describe what I wanted to do with the property," he said.

Ultimately, Coleman stopped communicating with the commission and abandoned his plans.

"He's never asked to do anything except remove the aluminum siding," she said.

Still, the city planner said all is not lost with the property, calling the house's cherry wood floors "irreplaceable." She said the property "probably has some value to it because of its location."

"J.K. Wadley was among the top 20 richest men in America," Beck said. "He lived in that house for 60 years. That's the kind of neighborhood that was nearby."

Wadley, the namesake of Wadley hospital, is known for his introduction of the electric golf cart. He even has a golfing trophy named after him.

Beck said it is difficult to place a precise value on the house because of the years of neglect -- Coleman said it has been at least two years since he last did yard work there -- but she said there are steps that can be taken to save the structure.

"All someone has to do is come to the commission and say, 'This is what I want to do," Beck said. "The person can submit an application along with a brochure or diagram of the materials they plan to use and where they will go to help the commission with making decisions."

In Coleman's case, since he has an application on file, he doesn't have to pay a fee to amend his application with the type of work he wants to do, Beck said.

"We can email an application. He can sign it and send it back with appropriate paperwork."

Thanks to the changes brought by the pandemic, Coleman could attend the commission's hearing of his application by telephone, Beck said.

The city planner said Coleman may be surprised to learn of changes the commission has made in the years since he last had dealings with him. For instance, the commission now allows owners of property in historic districts to use materials not as expensive as wood for replacing windows, as long as they stay in the same style as the original.

"The commission works hard to try to find some kind of solution if a person wants to work on the property. I don't know what he wants," Beck said.

Kilgore knows what she would like to see with Coleman's house.

"It has potential, but it will need a lot of work," she said.

A few days after being informed of Beck's interest in working with him, Coleman, who was making a local delivery, paused briefly before asking a question that could write a new chapter for 403 Pecan.

Print Headline: 'That made no sense to me': Frustration, miscommunication put house on shaky ground