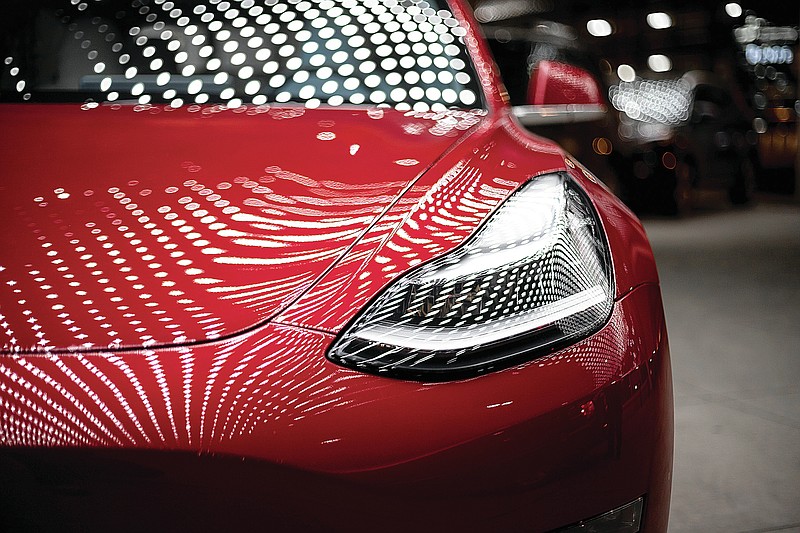 The findings are part of a sweeping effort by the National Highway Traffic Safety Administration to determine the safety of advanced driving systems as they become increasingly commonplace.

In 392 incidents cataloged by the agency from July 1 of last year through May 15, six people died and five were seriously injured. Teslas operating with Autopilot, the more ambitious Full Self Driving mode or any of their associated component features were in 273 crashes. Five of those Tesla crashes were fatal.

The data was collected under a NHTSA order last year requiring automakers to report crashes involving cars with advanced driver-assistance systems. Scores of manufacturers have rolled out such systems in recent years, including features that let you take your hands off the steering wheel under certain conditions and that help you parallel park.

NHTSA's order was an unusually bold step for the regulator, which has come under fire in recent years for not being more assertive with automakers.

"Until last year, NHTSA's response to autonomous vehicles and driver assistance has been, frankly, passive," said Matthew Wansley, a professor at the Cardozo School of Law in New York who specializes in emerging automotive technologies. "This is the first time the federal government has directly collected crash data on these technologies."

Speaking with reporters before Wednesday's release, Steven Cliff, the NHTSA administrator, said the data -- which the agency will continue to collect -- "will help our investigators quickly identify potential defect trends that emerge."

Cliff said NHTSA would use such data as a guide in making any rules or requirements for their design and use. "These technologies hold great promise to improve safety, but we need to understand how these vehicles are performing in real-world situations," he said.

But he cautioned against drawing conclusions from the data collected so far, noting that it does not take into account factors like the number of cars from each manufacturer that are on the road and equipped with these types of technologies.

An advanced driver-assistance system can steer, brake and accelerate vehicles on its own, though drivers must stay alert and ready to take control of the vehicle at any time.

Safety experts are concerned because these systems allow drivers to relinquish active control of the car and could lull them into thinking their cars are driving themselves. When the technology malfunctions or cannot handle a particular situation, drivers may be unprepared to take control quickly.

About 830,000 Tesla cars in the United States are equipped with Autopilot or the company's other driver-assistance technologies -- offering one explanation why Tesla vehicles accounted for nearly 70% of the reported crashes in the data released Wednesday.

Ford, GM, BMW and others have similar advanced systems that allow hands-free driving under certain conditions on highways, but far fewer of those models have been sold. These companies, however, have sold millions of cars over the last two decades that are equipped with individual components of driver-assistance systems. The components include so-called lane keeping, which helps drivers stay in their lanes, and adaptive cruise control, which maintains a car's speed and brakes automatically when traffic ahead slows.

In Wednesday's release, NHTSA disclosed that Honda vehicles were involved in 90 incidents and Subarus in 10. Ford, GM, BMW, Volkswagen, Toyota, Hyundai and Porsche each reported five or fewer.

The automated vehicles -- which are still in development for the most part but are being tested on public roads -- were involved in 130 incidents, NHTSA found. One resulted in a serious injury, 15 in minor or moderate injuries, and 108 didn't result in injuries. Many of the crashes involving automated vehicles led to fender benders or bumper taps because they were operated mainly at low speeds and in city driving.

In more than one-third of the 130 accidents involving the automated systems, the car was stopped and hit by another vehicle. In 11 crashes, a car enabled with such technology was going straight and collided with another vehicle that was changing lanes, the data showed.

Most of the incidents involving advanced systems were in San Francisco or the Bay Area, where companies like Waymo, Argo AI and Cruise are testing and refining the technology.

Waymo, which is owned by Google's parent company and is running a fleet of driverless taxis in Arizona, was part of 62 incidents. Cruise, a division of GM, was involved in 23. Cruise just started offering driverless taxi rides in San Francisco, and this month it received permission from California authorities to begin charging passengers.

None of the cars using the automated systems were involved in fatal accidents, and only one crash led to a serious injury. In March, a cyclist hit a vehicle operated by Cruise from behind while both were traveling downhill on a street in San Francisco.

NHTSA's order for automakers to submit the data was prompted partly by crashes and fatalities over the last six years that involved Teslas operating in Autopilot. Last week, NHTSA widened an investigation into whether Autopilot has technological and design flaws that pose safety risks. The agency has been looking into 35 crashes that occurred while Autopilot was activated, including nine that resulted in the deaths of 14 people since 2014. It had also opened a preliminary investigation into 16 incidents in which Teslas under Autopilot control crashed into emergency vehicles that had stopped and had their lights flashing.

In November, Tesla recalled nearly 12,000 vehicles that were part of the beta test of Full Self Driving -- a version of Autopilot designed for use on city streets -- after deploying a software update that the company said might cause crashes because of unexpected activation of the cars' emergency braking system.

NHTSA's order required companies to provide data on crashes when advanced driver-assistance systems and automated technologies were in use within 30 seconds of impact. Though this data provides a broader picture of the behavior of these systems than ever before, it is still difficult to determine whether they reduce crashes or otherwise improve safety.

The agency has not collected data that would allow researchers to easily determine whether using these systems is safer than turning them off in the same situations. Automakers were allowed to redact descriptions of what happened during the accidents, an option that Tesla as well as Ford and others used routinely, making it harder to interpret the data.

Some independent studies have explored these technologies but have not yet shown whether they reduce crashes or otherwise improve safety.

J. Christian Gerdes, a professor of mechanical engineering and a director of Stanford University's Center for Automotive Research, said the data released Wednesday was helpful, up to a point. "Can we learn more from this data? Yes," he said. "Is it an absolute gold mine for researchers? I don't see that."

Because of the redactions, he said, it was hard to gauge the ultimate utility of the findings. "NHTSA has a lot better understanding of this data than the general public can get just looking through what was released," he said.

Cliff, the NHTSA administrator, was guarded about acting on the results. "The data may raise more questions than they answer," he said.

Print Headline: Tesla autopilot and other Driver-assist systems linked to hundreds of crashes