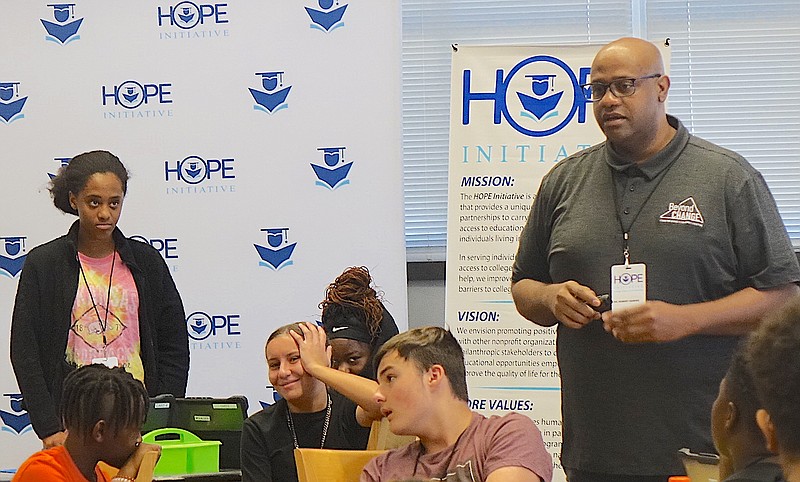 Dr.Robert Harper is opening his program for a Cass County initiative to help young people successfully transition to adulthood and to success in education and careers. He is speaking at Monday’s morning session in the AMS Library. More than 30 students are listening. (Staff photo by Neil Abeles)

Robert Harper grew up in Marietta and is a 1996 graduate of Linden-Kildare schools. With his basketball skills, he gained a scholarship to LSU-Shreveport, where he majored in business. Graduating in 2000, he spent two years in corporate America before returning to graduate school at Northwestern State University to focus on educational technology.

After helping a friend navigate college and become successful, Dr. Harper said he found being such a specialist in education guidance and leadership would be his career.

"My friend did well and after I saw the progress he made, I said this is what I want to do with my life -- help students transition from high school to college and then careers. But I realized I would need a doctorate in this field."

Dr. Harper then earned the doctorate from Grambling University in May of 2008 with an emphasis in developing education instructive systems and technology.

For his employment, he first worked at Northeast Texas Community College for five years and then with Jarvis Christian College where he was director of enrollment management. After a year, he was promoted to associate vice president for student services.

After the experience of being a student dean for student engagement and retention at Eastfield College at Mesquite, Tx , Dr. Harper decided upon a change.

"I was helping students at that point but limited to one institution. I wanted to spread, and I ended up turning to the world of nonprofits, founding and becoming CEO of The HOPE Initiative which is a non-profit outreach to those who are under-served in education and workforce opportunities."