Astros complete sweep of Mets behind 2 more HRs by Alvarez 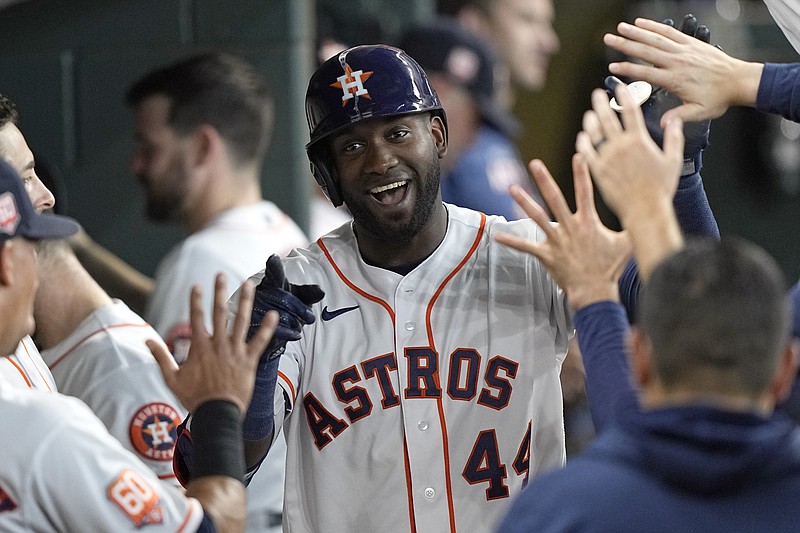 Houston Astros' Yordan Alvarez (44) celebrates with teammates in the dugout after hitting a home run against the New York Mets during the third inning of a baseball game Wednesday, June 22, 2022, in Houston. (AP Photo/David J. Phillip)

HOUSTON -- Yordan Alvarez homered twice off Carlos Carrasco as the Houston Astros jumped on him early and held on for a 5-3 win over the New York Mets on Wednesday.

Alvarez hit two of the season-high three homers Carrasco allowed before the pitcher left with lower back tightness in the third inning with the Astros up 5-1. Alvarez, who also homered Tuesday night, now has 21 this season. The 24-year-old Alvarez leads all players with a 1.064 OPS and has hit nine homers in his last 20 games.

Alex Bregman added a two-run homer for the Astros, who won their third straight.

Houston starter Luis García (5-5) yielded six hits and three runs with five strikeouts in five-plus innings for the win. Ryan Pressly pitched a scoreless ninth for his 14th save.

Carrasco (8-3) yielded four hits and five runs in 2 1/3 innings before his injury. The National League-leading Mets have dropped eight in a row in Houston.

Judge's 22nd career multi-homer game helped the Yankees come back from a 4-1 deficit after Isaac Paredes hit his fourth home run in two games for the Rays.

Clarke Schmidt (4-2) got the win and Clay Holmes pitched a scoreless ninth for his 12th save in 13 attempts.

The win was the 18th in 21 games for the Yankees, who maintained a 12-game lead in the AL East.

Ralph Garza Jr. (0-2) took the loss for Tampa Bay, which was defeated for the eighth time in 11 games. The Rays dropped two of three to the rival Yankees and lost a fourth straight series for the first time since August 2017.

ARLINGTON, Texas -- Brad Miller hit a two-run single against his former team and Texas beat Philadelphia for the ninth time in a row to hand Zack Wheeler his first loss in two months.

Kole Calhoun also drove in two runs for the Rangers, whose winning streak against the Phillies dates to the opening day of the 2014 season.

Jon Gray (3-3) won consecutive starts for the first time this season. The right-hander struck out six and walked one while allowing two runs and four hits over 5 2/3 innings. Joe Barlow, the third Texas reliever, worked the ninth for his 13th save.

Wheeler (6-4) lost for the first time in his last 10 starts, since losing his first three starts this season. He struck out eight, but walked three and gave up four runs (two earned) on seven hits in 4 1/3 innings.

Kyle Schwarber extended his career-best on-base streak to 26 games for the Phillies with a two-run homer. Philadelphia has lost three games in a row after winning 14 of its first 16 games for interim manager Rob Thomson.

Duvall's single off Tyler Rogers drove in William Contreras from second base as the Giants wasted another strong start by Carlos Rodón, who allowed only three hits and one run in seven innings.

Jake McGee (1-2) blew a 3-1 lead, built on homers by Mike Yastrzemski and Darin Ruf, by allowing three runs in the ninth. McGee was brought in to close out the lead because Camilo Doval had pitched back-to-back games. Dansby Swanson led off the ninth with a homer off McGee to cut San Francisco's lead to one run. Marcell Ozuna followed with a single to right field and moved to second on Matt Olson's fly ball to deep center field.

Contreras added a single to left field to drive in Ozuna for a 3-3 tie. Right-hander Tyler Rogers struck out Orlando Arcia as Contreras stole second base. The steal proved to be crucial when Duval followed with the game-ending single.

Tommy La Stella's run-scoring single off A.J. Minter (3-1) in the ninth drove in Ruf to add to the Giants' lead.

Kirk hit an RBI single in the first and a homer in the third. He tops All-Star fan voting for AL catchers and leads all qualified major league catchers in batting average (.307) and OPS (.857). Kirk batted .364 (8 for 22) with four home runs and eight RBIs in five games against the White Sox this season.

Stripling (4-2) gave up one run in six innings. He scattered five hits and didn't allow a runner past second until Josh Harrison scored from first on a single by Luis Robert in the sixth.

SAN DIEGO -- Jurickson Profar had four hits, drove in two runs and scored twice for San Diego, which jumped on Madison Bumgarner early against Arizona for a three-game sweep.

Jorge Alfaro, whose walk-off single in the 10th inning Tuesday night gave the Padres a 3-2 win, hit a solo homer in the sixth. Rookie José Azocar fell a home run short of the cycle in his first career three-hit game.

Bumgarner (3-8) got his 2,000th career strikeout, but lost for the fifth time in six starts. Bumgarner lasted only four innings, giving up six runs, four earned, and four hits. He struck out five and walked none.

CINCINNATI -- Freddie Freeman homered and drove in two runs and Los Angeles extended its winning streak against Cincinnati this season to six games.

Albert Almora Jr. hit his fifth homer of the season for Cincinnati, which has lost eight straight over two seasons to the Dodgers at Great American Ball Park.

Dodgers left-hander Tyler Anderson, who took a no-hitter into the ninth inning in his last start, allowed three earned runs on five hits in five innings. Alex Vesia (1-0) got the win.

BOSTON -- Rob Refsnyder hit a two-run homer in the third inning and Boston posted its third series sweep of the season, powering past Detroit.

Jarren Duran and Alex Verdugo each added a two-run double as Boston won for the eighth time in 10 games. Michael Wacha (6-1) pitched six innings, allowing two runs and five hits with seven strikeouts to help the Red Sox improve to a season-high eight games above .500.

Javier Báez hit a two-run homer for the Tigers, who have lost nine of 11.

The Marlins, who played their second home game of the season with the retractable roof open at loanDepot Park, will attempt a sweep of the three-game series Thursday.

López (5-3) gave up four hits, walked three and struck out six, ending a winless drought since May 7.

Cooper's two-run homer capped a four-run third against Chad Kuhl (4-5) and put Miami ahead 4-1. Jon Berti hit an RBI triple and scored on Chisholm's single before Cooper connected on a drive that cleared the center field wall for his fifth homer.

Colorado narrowed the gap on Elias Díaz's three-run homer off Louis Head in the ninth.

Held to a total of two runs in the first two games of the series, Chicago broke out for seven runs in the second inning against Jared Eickhoff (0-1). Eickhoff made his 2022 debut and allowed 10 runs on 10 hits in 4 1/3 innings. He became the first Pirates pitcher to give up 10 runs in his first outing with the team. He also gave up 10 runs in his first start with the New York Mets in 2021.

Chicago starter Keegan Thompson (7-2) worked six innings and allowed four hits. He struck out seven and gave up one run, a solo homer by Diego Castillo in the second. Castillo moved from second base to the mound in the ninth and gave up Rivas' slam. 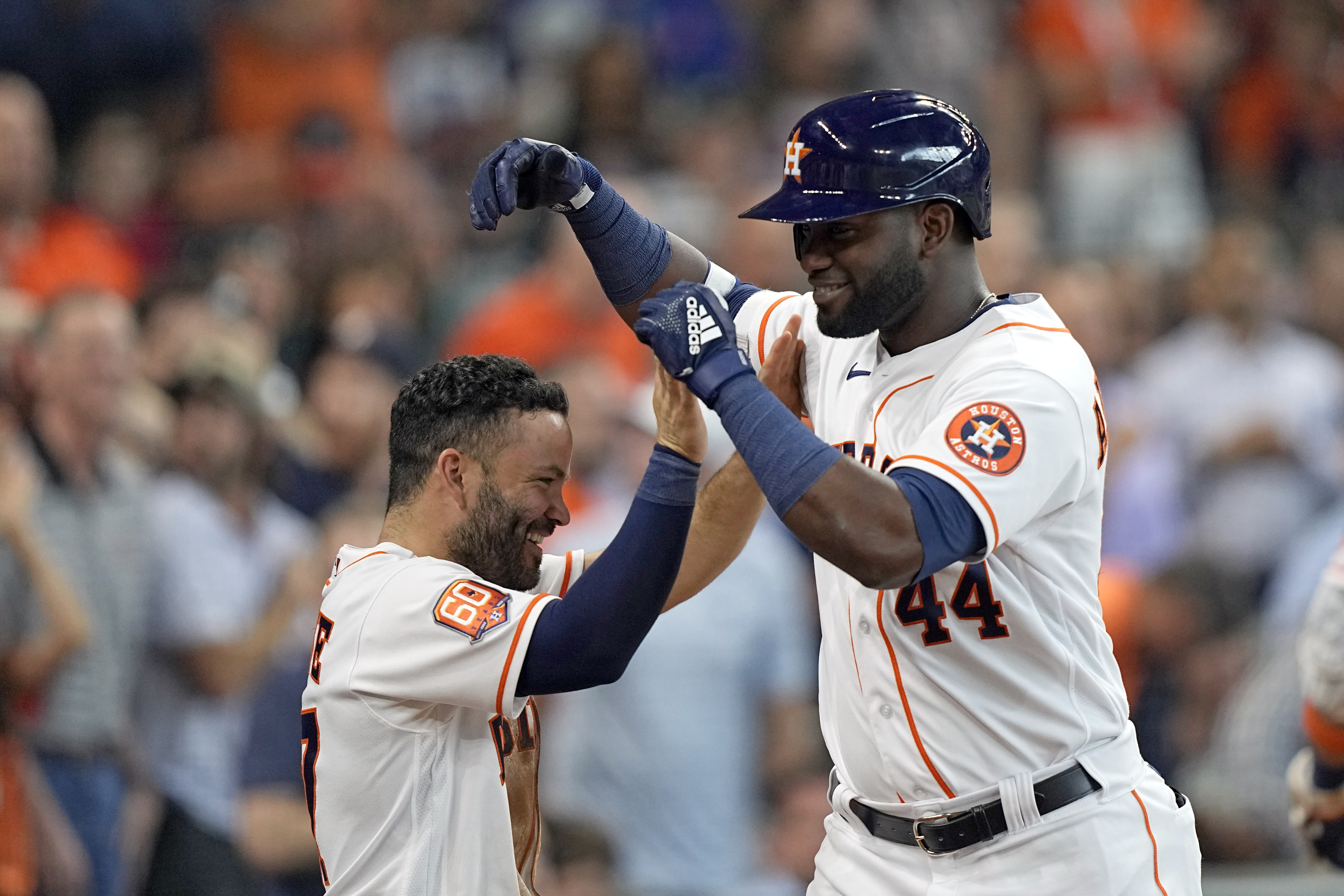 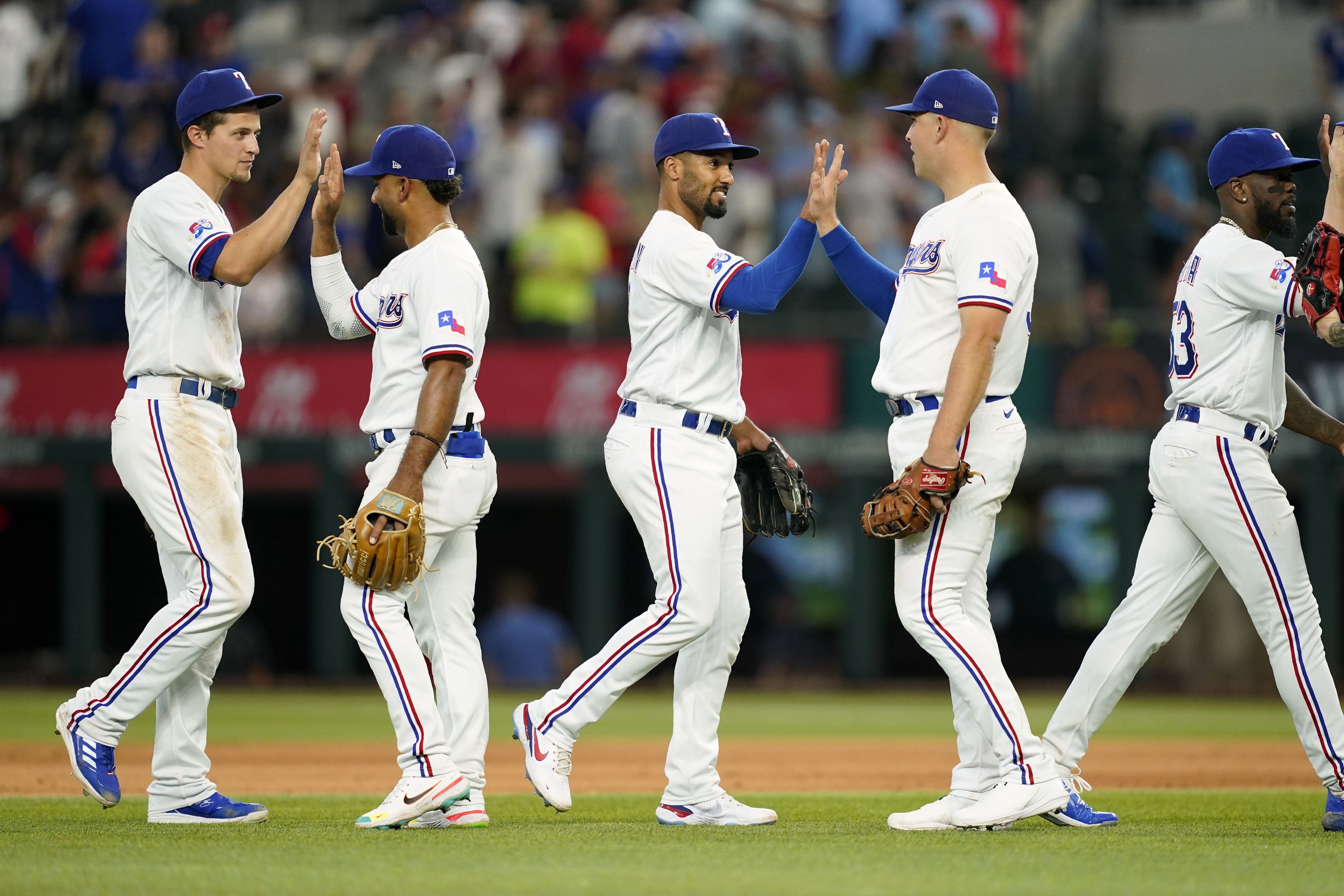