WITH POLL | Don’t sweat it: Salvation Army opens cooling station for those who need relief from heat 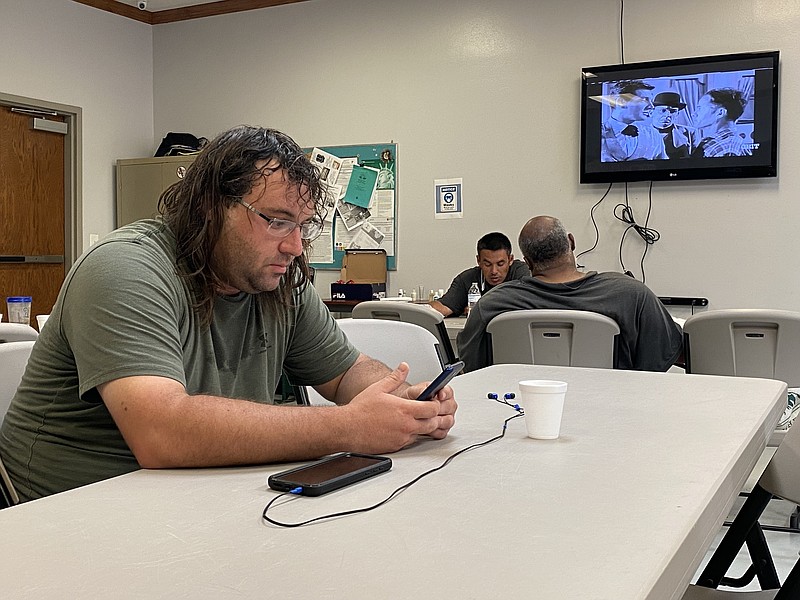 Joshua Sonnefeldt scrolls through his cellphone while taking a break from the heat Wednesday, June 22, 2022, inside the The Salvation Army's Perot Center of Hope at 316 Hazel St. in Texarkana, Ark. The center has transformed one of its rooms into a cooling station. (Staff photo)

TEXARKANA, Ark. -- The Salvation Army Texarkana Family Shelter has opened a cooling station at 316 Hazel St. for people who need relief from the heat.

Temperatures are soaring, which poses a threat for the elderly and those without a place to cool off, said Sann Terry, spokeswoman for the local Salvation Army.

"Many families and singles have come to our shelter to take reprieve from the sweltering heat outside," Terry said.

The cooling station is meant to prevent hyperthermia and to help prevent heat-related illnesses, which include heat cramps, heat exhaustion and heat stroke. Exposure to several days of extreme heat has a potential to cause a large number of deaths in a short time period, according to the CDC.

The cooling station will be open from 8:30 a.m. to 5 p.m. throughout the week. It will provide a designated area, for those who come, to rest and watch TV. Cold water will be provided to all, Terry said.

"Currently, we are asking that if you know anyone that is vulnerable, homeless, elderly or ill please provide them with this information as it might save their life," Terry said.

A heat advisory was in effect Wednesday, with the heat index expected to reach 105 degrees. Heat is expected to persist through the week with maximum temperatures reaching 100 degrees, according to the National Weather Service.