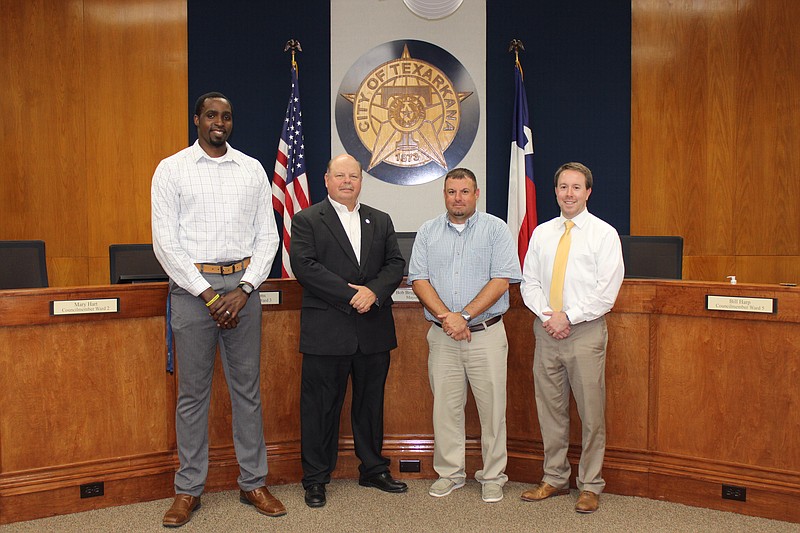 The city of Texarkana, Texas, recently made several appointments and promotions. From left, Vashil Fernandez has been promoted to director of Planning and Community Development; Police Chief Kevin Schutte and Public Works Director Dusty Henslee have been appointed assistant city managers; and J.W. Bramlett has been promoted to director of Administrative Services. (Submitted photo)

Police Chief Kevin Schutte and Director of Public Works Dusty Henslee will retain their current duties as directors and take on additional duties as assistant city managers, according to a news release from the city.

Henslee began working for the city in March 2009 as an associate design engineer. Over the next few years he was promoted to the stormwater engineer, city engineer and then in January 2017 to the director of Public Works. A couple of his most notable accomplishments include the creation of the city's major street maintenance program in 2018 and helping convert the city to its first automated work order system in 2016.

Henslee received a Bachelor of Science in Civil Engineering from the University of Texas at Arlington in 2006 and became a licensed professional engineer in Texas in 2010. He also became a certified floodplain manager in 2010 and a certified public manager in 2021.

Schutte began his career in law enforcement with the city in 1988 as a patrolman. Over the past 34 years, he has been a detective, instructor, sergeant, lieutenant, captain and assistant chief. He was named chief in December 2018.

Schutte's education includes classes at Texarkana College, Kilgore College and Texas A&M University- Texarkana. He is a graduate of the Institute of Law Enforcement Administration and the certified public management course. He has a Master Peace Officer and Police Instructor licenses.

Fernandez began working for the city in November 2019 as a community development specialist. In May 2021, he was promoted to interim director of Planning and Community Development.

Bramlett is a 2007 graduate of the University of North Texas with a bachelor's in political science. He obtained his certified professional designation in 2020 from the Society for Human Resource Management.

Bramlett has been employed with the city since 2016. Since joining the human resources department, he has managed the city's recruitment process and professional development programs. He has been serving as the interim director of administrative services for the past year.