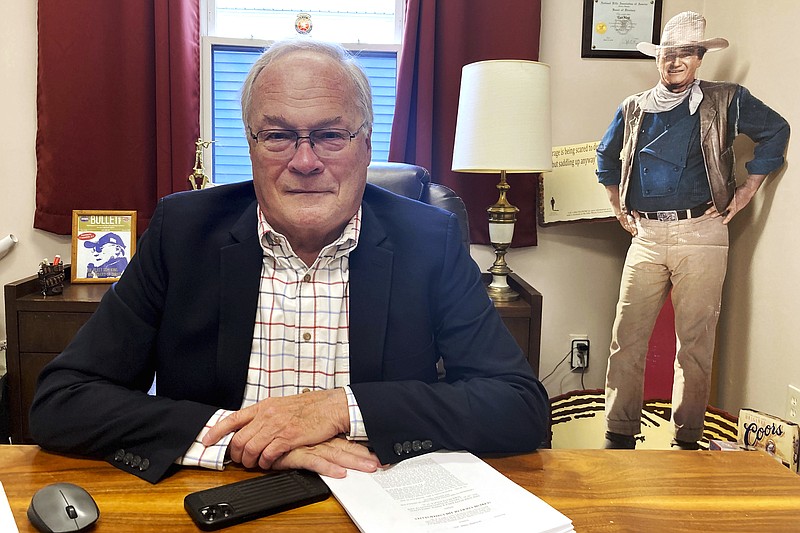 Tom King, president of the plaintiff New York State Rifle and Pistol Association, speaks in his office, in East Greenbush, N.Y., Thursday, June 23, 2022. In a major expansion of gun rights, the Supreme Court said Thursday that Americans have a right to carry firearms in public for self-defense. (AP Photo/Michael Hill)

WASHINGTON -- In a major expansion of gun rights after a series of mass shootings, the Supreme Court said Thursday that Americans have a right to carry firearms in public for self-defense, a ruling likely to lead to more people legally armed. The decision came out as Congress and states debate gun-control legislation.

About one-quarter of the U.S. population lives in states expected to be affected by the ruling, which struck down a New York gun law. The high court's first major gun decision in more than a decade split the court 6-3, with the court's conservatives in the majority and liberals in dissent.

Across the street from the court, lawmakers at the Capitol sped toward passage of gun legislation prompted by recent massacres in Texas,New York and California. Senators cleared the way for the measure, modest in scope but still the most far-reaching in decades.

Also Thursday, underscoring the nation's deep divisions over the issue, the sister of a 9-year-old girl killed in the school shooting in Uvalde, Texas, pleaded with state lawmakers to pass gun legislation. The Republican-controlled legislature has stripped away gun restrictions over the past decade.

President Joe Biden said in a statement he was "deeply disappointed" by the Supreme Court ruling. It "contradicts both common sense and the Constitution, and should deeply trouble us all," he said.

He urged states to pass new laws. "I call on Americans across the country to make their voices heard on gun safety. Lives are on the line," he said.

The decision struck down a New York law requiring people to demonstrate a particular need for carrying a gun in order to get a license to carry a gun in a concealed way in public. The justices said that requirement violates the Second Amendment right to "keep and bear arms."

Justice Clarence Thomas wrote for the majority that the Constitution protects "an individual's right to carry a handgun for self-defense outside the home." That right is not a "second-class right," Thomas wrote. "We know of no other constitutional right that an individual may exercise only after demonstrating to government officers some special need."

California, Hawaii, Maryland, Massachusetts, New Jersey and Rhode Island all have laws similar to New York's. Those laws are expected to be quickly challenged.

Gov. Kathy Hochul, D-N.Y., said the ruling came at a particularly painful time, with New York mourning the deaths of 10 people in a shooting at a supermarket in Buffalo. "This decision isn't just reckless. It's reprehensible. It's not what New Yorkers want," she said.

Gun control groups called the decision a significant setback. Michael Waldman, president of the Brennan Center for Justice and an expert on the Second Amendment, wrote on Twitter that the decision could be the "biggest expansion of gun rights" by the Supreme Court in U.S. history.

Republican lawmakers were among those cheering the decision. Tom King, president of the plaintiff New York State Rifle and Pistol Association, said he was relieved.

"The lawful and legal gun owner of New York State is no longer going to be persecuted by laws that have nothing to do with the safety of the people and will do nothing to make the people safer," he said. "And maybe now we'll start going after criminals and perpetrators of these heinous acts."

The court's decision is somewhat out of step with public opinion. About half of the voters in the 2020 presidential election said gun laws in the U.S. should be made more strict, according to AP VoteCast, an expansive survey of the electorate. An additional one-third said laws should be kept as they are, while only about 1 in 10 said gun laws should be less strict.

About 8 in 10 Democratic voters said gun laws should be made more strict, VoteCast showed. Among Republican voters, roughly half said laws should be kept as they are, while the remaining half closely divided between more and less strict.

In a dissent joined by his liberal colleagues, Justice Stephen Breyer focused on the toll from gun violence.

Since the beginning of this year, "there have already been 277 reported mass shootings -- an average of more than one per day," Breyer wrote. He accused his colleagues in the majority of acting "without considering the potentially deadly consequences" of their decision. He said the ruling would "severely" burden states' efforts to pass laws "that limit, in various ways, who may purchase, carry, or use firearms of different kinds."

Justice Samuel Alito criticized Breyer's dissent, questioning the relevance of his discussion of mass shootings and other gun death statistics. Alito wrote that the court had decided "nothing about who may lawfully possess a firearm or the requirements that must be met to buy a gun" and nothing "about the kinds of weapons that people may possess."

"Today, unfortunately, many Americans have good reason to fear they will be victimized if they are unable to protect themselves." The Second Amendment, he said, "guarantees their right to do so."

Justice Brett Kavanaugh, joined by Chief Justice John Roberts, noted the limits of the decision. States can still require people to get a license to carry a gun, Kavanaugh wrote, and condition that license on "fingerprinting, a background check, a mental health records check, and training in firearms handling and in laws regarding the use of force, among other possible requirements."

Backers of New York's law had argued that striking it down would lead to more guns on the streets and higher rates of violent crime. Gun violence, on the rise during the coronavirus pandemic, has spiked anew. Gun purchases have also risen.

In most of the country gun owners have little difficulty legally carrying their weapons in public. But that had been harder to do in New York and the handful of states with similar laws. New York's law, in place since 1913, says that to carry a concealed handgun in public, a person applying for a license has to show "proper cause," a specific need to carry the weapon.

The state had issued unrestricted licenses where a person could carry a gun anywhere and restricted licenses allowing a person to carry the weapon but just for specific purposes such as hunting and target shooting or to and from their place of business.

The challenge to the New York law was brought by the New York State Rifle & Pistol Association, which describes itself as the nation's oldest firearms advocacy organization, and two men seeking an unrestricted ability to carry guns outside their homes.

The Supreme Court last issued a major gun decision in 2010. In that decision and a ruling from 2008 the justices established a nationwide right to keep a gun at home for self-defense. The question for the court this time was just about carrying a gun outside the home. Thomas, who turned 74 on Thursday, wrote in his opinion that: "Nothing in the Second Amendment's text draws a home/public distinction with respect to the right to keep and bear arms." 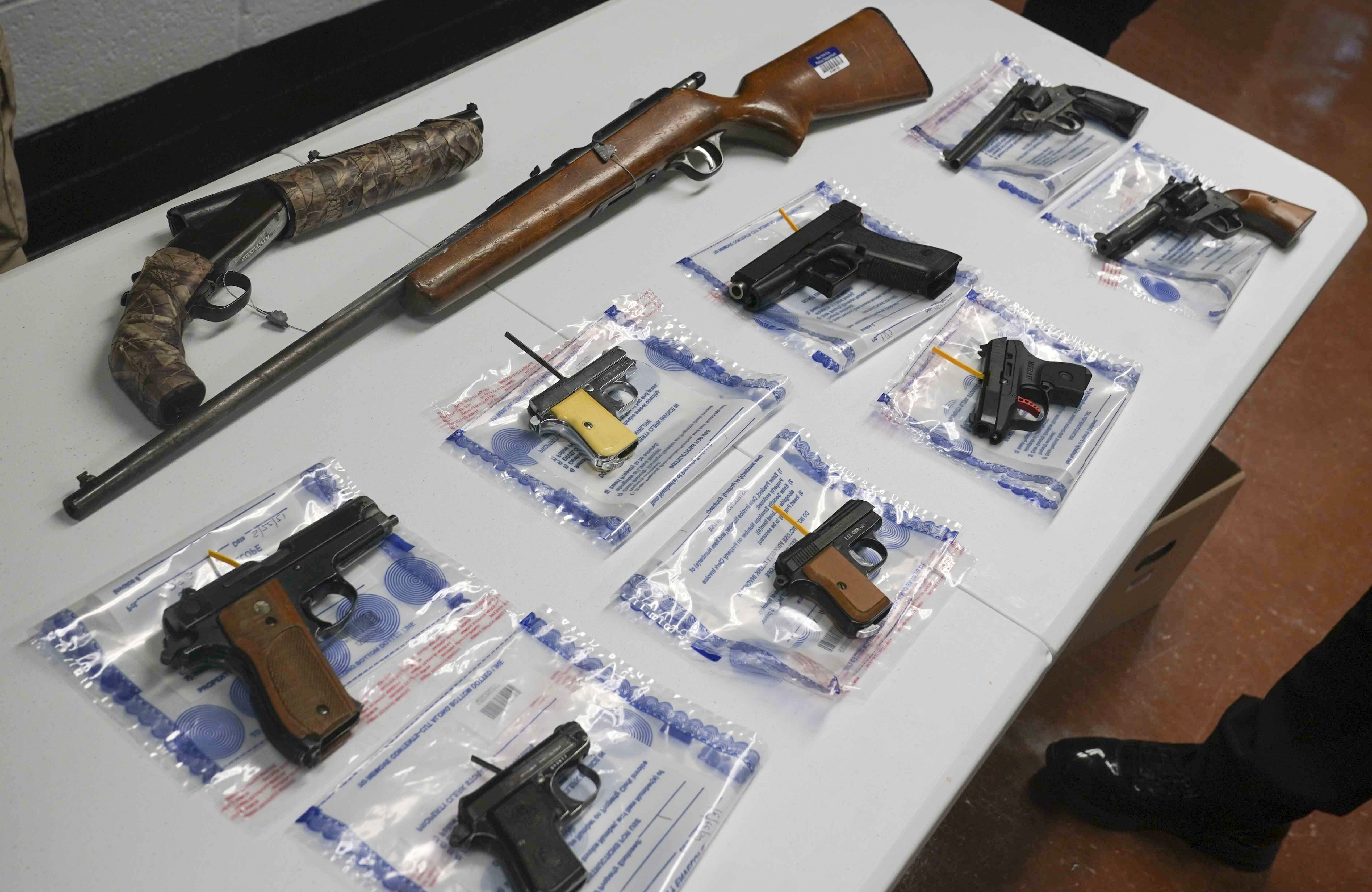 FILE - A collection of illegal guns is displayed during a gun buyback event, May 22, 2021 in Brooklyn, N.Y. The Supreme Court said Thursday, June 23, 2022 that Americans have a right to carry guns in public, a major expansion of gun rights. The court struck down a New York gun law in a ruling expected to directly impact half a dozen other populous states. (AP Photo/Bebeto Matthews, File)