NFL's relationship with gambling is complicated 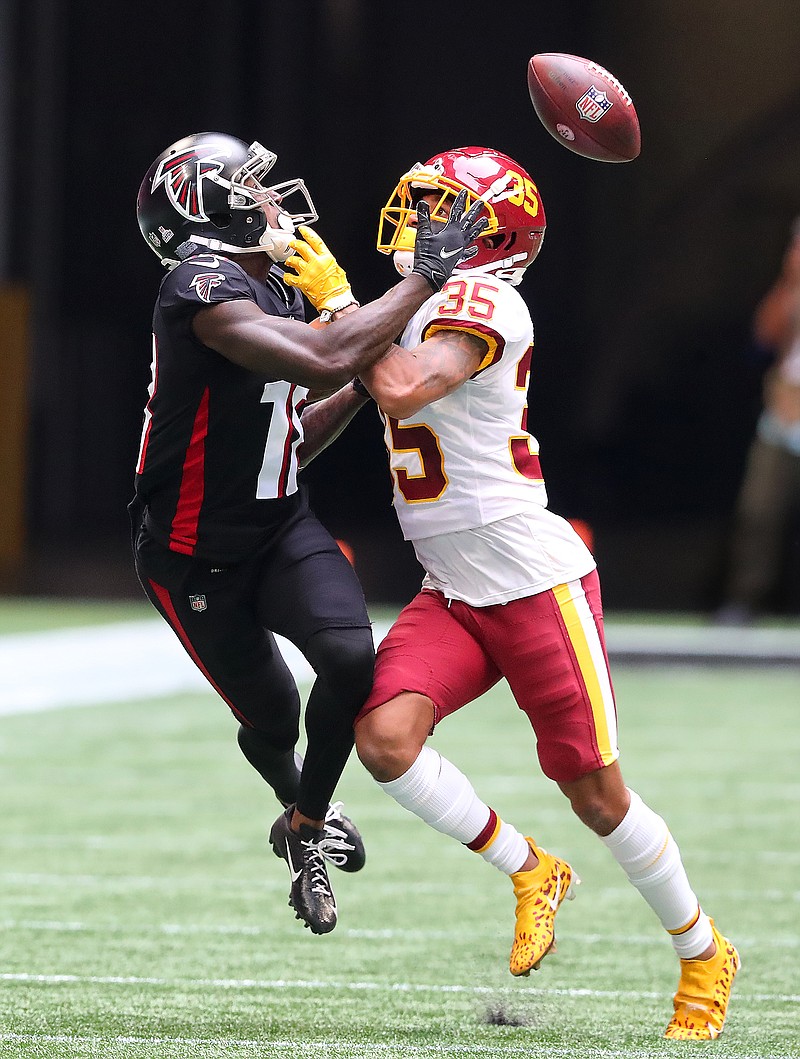 FLOWERY BRANCH, Ga. -- If the NFL and legalized gambling had a page on social media, the relationship box would denote their status as: It's complicated.

Things clashed last week when Falcons wide receiver Calvin Ridley was suspended indefinitely by the league for betting on games. Ridley's betting was exposed by one of the NFL's legalized gambling partners.

Not betting on NFL games by players long has been the rule. Taking money from a legalized gambling company is a new frontier.

"The fear is that if a player gambles -- there are two issues -- one is (betting) on your own team, but the other is getting involved with heavy gambling," legendary sports agent Leigh Steinberg told The Atlanta Journal-Constitution on Wednesday. "That to go into debt, be compromised and somehow be tempted to shave a game."

Ridley was away from the team on a mental-health sabbatical in November when he made the bets. On social media, he admitted to making $1,500 in bets. Now he will not receive his salary of $11.1 million for 2022 while suspended.

Even though the league has entered into business partnerships with several legalized betting companies, players betting on the games is considered the most severe violation of league rules.

"So, if you think about professional sports, nothing can derail the National Football League at this particular point," Steinberg said. "We know that bad athletic behavior doesn't do it, right (Peterson, Rice, et al)? There's been plenty of that, but if people ever thought or questioned the validity and integrity of a game because they thought a player or a coach, a team was not giving full performance, then it would relegate the NFL to (professional) wrestling."

Ridley's gambling was seen by the league as going to the fabric of the game and will put more light on the allegation that Miami owner Stephen Ross asked former coach Brian Flores to lose games to improve their draft position.

"People would think it was phony, would think it was fixed," Steinberg said of the wrestling analogy. "So, everything relies on the concept of an even playing field. The supposition that both teams are trying as hard as they can, giving maximum effort. Both coaches are incentivized to win.

"And what you're seeing is a real contest between two teams playing with the same rules on the same field, and it's only athletic performances that determine the outcome. So, understand that anything involving an athlete and betting triggers a tripwire. It sends shudders through the NFL league office and individual teams."

Until recently, the NFL had a firm stance against gambling dating to Commissioner Bert Bell in the post-World War II era. He was the commissioner from 1946 to '59.

He implemented the first proactive anti-gambling policy. Bell suspended Frank Filchock and Merle Hapes of the New York Giants for not reporting attempted bribes to throw the 1946 championship game.

Both players were suspended for "conduct detrimental to the league."

On April 17, 1963, Karras and Green Bay Packers running back Paul Hornung were suspended indefinitely. Hornung for betting (1959-62) and Karras for betting and associating with people described as "known hoodlums," according to Joe Horrigan's book titled "NFL Century: The One-Hundred-Year rise of America's Greatest Sports League."

Five other players were fined $2,000, the maximum penalty at that time, for betting $50 on the 1962 NFL title game at a social gathering set up by Karras.

Colts quarterback Art Schlichter, an admitted habitual gambler, was suspended in 1983 and reinstated after 13 months before washing out of the league.

In 2019, Cardinals cornerback Josh Shaw was suspended. He was reinstated in March 2021 but has not signed with an NFL team.

Ridley became the seventh player suspended for gambling or gambling-related activities. He can apply for reinstatement Feb. 15.

The gambling playing field shifted in 2018 with the Supreme Count ruling to legalize sports gambling.

"The Supreme Court's decision ... reaffirms our decision to collaborate with the other sports unions on the issues of player safety, integrity of our games and privacy and publicity rights," the NFLPA said in a statement. "Our union will monitor developments closely and address the implications of this decision with the NFL, state legislators and other relevant stakeholders."

The league entered into several partnerships with gambling companies. The players approved of those deals, as the proceeds were included in the revenues that were split with the league in the 2020 collective bargaining agreement.

"Generally speaking, the 2020 CBA -- building off the 2011 CBA -- defines revenues as everything football-related in three general categories: television/broadcast, sponsorships and local revenues," NFLPA president J.C. Tretter wrote. "Some examples of this are: all television deals, ticket sales, concessions, league sponsorships, local media deals and yes, even gambling revenues are included as part of our share of revenue."

So accepting money from gambling companies is fine, but gambling on games is not.

"You have to segregate those two concepts," Steinberg said. "No one ever thought that professional sports would be in Las Vegas, right? In other words, for years and years, this was the last. ... Segregating the sport from any connection with gambling was considered absolutely key to the continued existence of professional sports."

The NFL allowed the Raiders to move to Las Vegas, the gambling capital of North America. The Raiders followed the NHL, which allowed a hockey team in Las Vegas.

The leagues moved swiftly to embrace legalized gambling after the Supreme Court ruling.

Presidents of the Falcons, Braves, Hawks and Atlanta United formed the Georgia Professional Sports Integrity Alliance and sent a letter to state lawmakers asking them to legalize online and mobile sports betting in 2019.

Thus far, the state Legislature has not legalized gambling.

"The first thing we saw was teams and leagues taking parts of fantasy sports and gambling," Steinberg said. "We saw (American) Indian casinos being sponsors, right? A football team and hockey team moved to Las Vegas. So, in a way there's some inconsistency with punishing a player for betting when we have franchises themselves involved in the betting business."

The NFL pointed out that one of its gambling partners tipped off the league to Ridley's gambling activity. He was out of state in Florida, and that was a trigger.

Ridley had three business days to inform the league in writing of an appeal. He basically made that a moot point with his social-media admission. Ridley would have had a hearing before the commissioner or a designee and his counsel. Also, he could have had NFLPA representation.

The NFL is quick to point out that other leagues have been more aggressive in the sports betting world and that the NFLPA was more than happy to split the gambling proceeds. The NFLPA didn't try to get the ban on gambling removed from the latest CBA.

The NFL's gambling policy states: "All NFL personnel are prohibited from placing, soliciting, or facilitating any bet, whether directly or through a third-party, on any NFL game, practice or other event. This includes betting on game outcome, statistics, score, performance of any individual participant, or any kind of proposition bet."

Kevin Winston, the Falcons' former director of player personnel, made a point of emphasizing the gambling policy in the mandatory education and training session for all rookies, all players and staff. Also, there are signs in the locker room stating that no personnel may bet on NFL games.

Murphy vs. the NCAA struck down the Professional and Amateur Sports Protection Act (PASPA) of 1992.

"We have closely monitored the development of legalized sports betting in the U.S. and public perceptions since PASPA was struck down in 2018," NFL spokesperson Brian McCarthy said. "We have taken a thoughtful, long-term, strategic approach to engaging in sports betting and have followed what other pro sports leagues have done with business partners. Other sports leagues also prohibit their players and personnel from betting on their games."

The NFL contends that steps have been taken to separate the business side from on-field play.

"The public needs to know what they are seeing on the field is the result of hard work and fair play with no outside influences dictating the outcome of games," McCarthy said. "Continuing to protect the integrity of our game has been at the forefront, including the training of over 16,000 NFL personnel each season, including players, coaches, officials, game-day workers and other staff."

There also are ads during NFL games to support and promote responsible betting.

"The point is, look, pro football dominates this country right now," Steinberg said. "Partly because it's had uninterrupted play since 1987 as contrasted with baseball. That's part of it because labor issues have been solved, on goes the game."

The league has held to the position that results of the game must be legitimate.

"If fans ever started to speculate that what they were seeing in front of them was a performance shaded or tainted by someone with gambling debts, that was in serious trouble with a bookie like Art Schlichter, then all of a sudden, instead of dominating sports ... it would lose massive amounts of popularity," Steinberg said. "The point is, that this stokes the deepest fears of the NFL, about compromised results, undermining the foundation of the game."