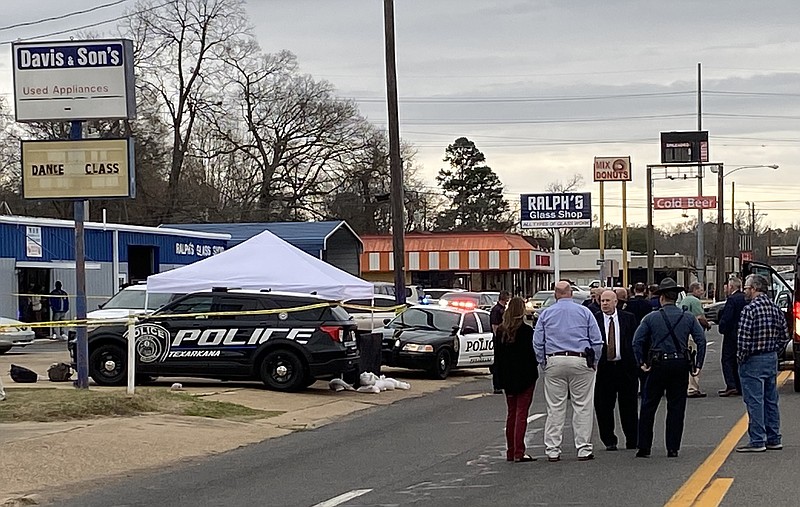 Law officers converse near the scene where two Bowie County fugitives were apprehended during an officer-involved shooting Monday in the 200 block of East Street in Texarkana, Arkansas. (Staff photo)

UPDATE: Inmate, who has been identified as 30-year-old Michael D. Olson,  killed following jail escape. He had only months left to serve.

A Bowie County jail fugitive was shot and killed Monday while being taken into custody.

The identity of the inmate is being withheld, pending family notification procedures, the Arkansas State Police said late Monday.

The incident involved two Texarkana, Arkansas, police officers. Officials of the local police department have requested the Arkansas State Police to investigate the use of deadly force by one of its officers.

Bowie County Sheriff Jeff Neal said Michael Olson and Wayde Land had broken through cinder block, climbed into pipe chase and knocked a hole through concrete on the back wall to exit the jail. The breach was located on the second floor of the jail annex.

Once outside, the men were able to maneuver through the perimeter fencing and concertina wire before fleeing the facility, Neal said. The inmates were wearing issued green jail clothing at the time of the escape.

“Video footage later shows they got on a train,” the sheriff said.

About 1 p.m. Monday, one of the Arkansas-side police officers located the escapees outside 210 East St., according to the state police. Subsequently, both officers approached the pair in an attempt to apprehend the escapees.

During the struggle the gun was fired, causing the first officer to shoot the inmate fighting with the other officer, according to ASP.

The body of the inmate will be transported to the Arkansas State Crime Laboratory to confirm the cause and manner of death.

Special agents of the state police Criminal Investigation Division are continuing to collect statements from witnesses and evidence associated with the shooting.

The investigative case file prepared by the state police will be submitted to the Miller County prosecuting attorney, who will determine whether the use of deadly force by a law enforcement officer in the incident was consistent with Arkansas laws.

The section of East Street where the shooting occurred, about 2 miles south of the jail, contains several businesses, including a grocery store, pharmacy and small restaurant. One woman who works in the area recalled a commotion shortly before the shooting.

“I saw them (police) pull over the guy in the camouflage jacket, and then I saw the guy in the brown jacket run by,” said Deidre, an employee of Bottle Mart in the 100 block of East Street. “Next thing I know, I hear two shots.”

The scene around the 200 block of East Street remained cordoned off early Monday evening amid a flurry of police activity. The focus was near the corner of a business parking lot, where investigators huddled around a crime scene tent.

Yellow crime scene markers could be seen in various places along the edge of the parking lot, including around two backpacks from which investigators collected evidence.

Neal said officials are still trying to determine how long the inmates were gone before their absence was noticed.

Olson, 30, was being held on felony assault and a probation violation charge. Land, 38, was in jail on the charges of burglary of a building and possession of a controlled substance, according to the Texarkana Texas Police Department. 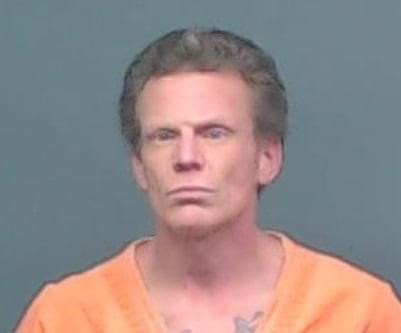 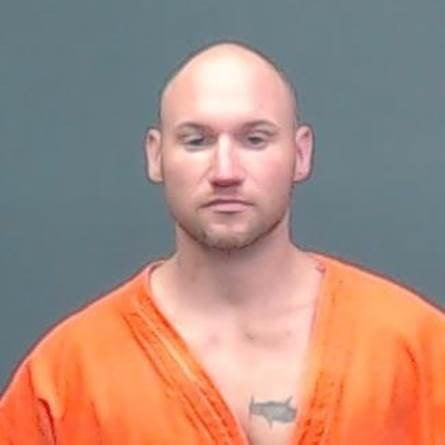