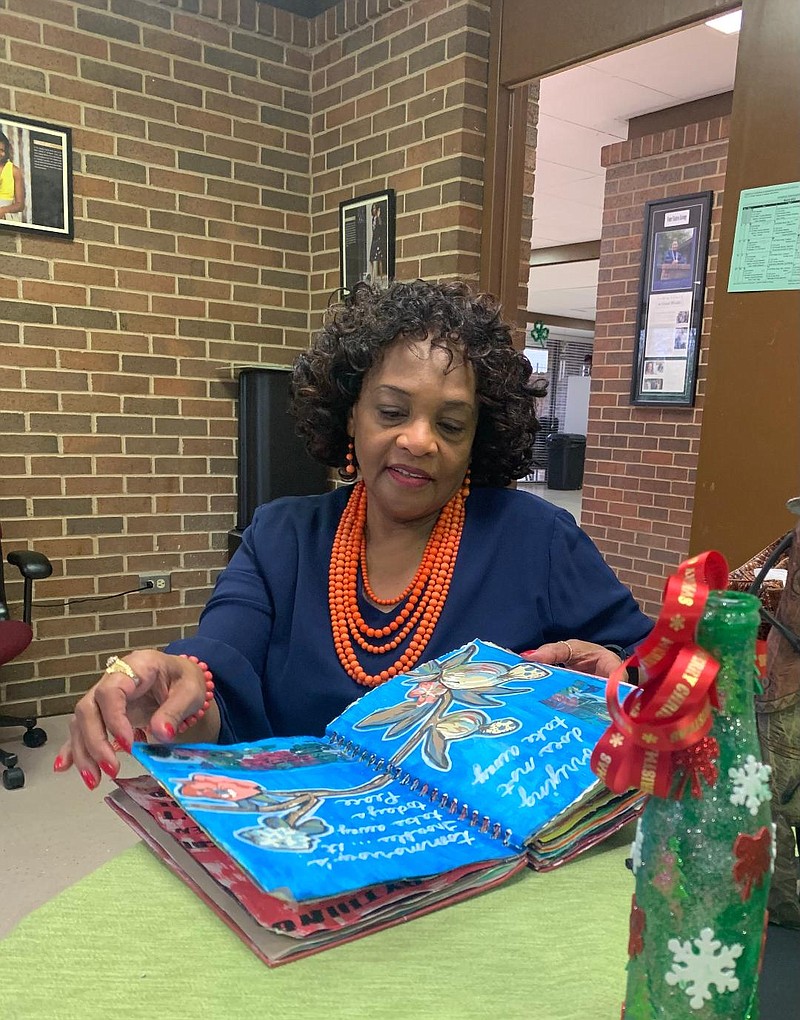 Vicki Parks looks through an art journal she created at the Sandflat center in Texarkana Arkansas. (staff photo by Lori Dunn)

Vicki Parks has worn several different hats throughout her life but her favorite role is when she can help others during a trying time.

She has had several different careers, and her current title as a licensed funeral director with Jones-Stuart Mortuary in the Sandflat Neighborhood of Texarkana Arkansas has been one of her most rewarding ones.

Parks had been an usher in her church, Miles Chapel CM, and had assisted with funerals there. She thought a job in a funeral home might be a good fit for her.

She started working at the funeral home, then named Jones Funeral Home, in 2003 as a funeral attendant.

The family-owned business had served Texarkana since 1914. Jones Funeral Home closed in 2009 but reopened in 2010, when it was purchased by Jonathan "Mickey" Stuart Jr.

Parks returned to work with him and has been there ever since.

"People ask me why I do it. I tell them it's a calling. I'm a people person," she said.

Parks has lived in Texarkana all of her life. After high school, she worked for General Telephone for 20 years.

When the company left the area in 1993, Parks went to work as a receptionist and secretary for the Texarkana Independent School District.

"I was a school secretary for 25 years," she said.

Parks retired from TISD in March of 2020 when school closed because of the COVID-19 pandemic.

However, she was not ready to retire from all of her jobs. She still works as a funeral director and finds it extremely rewarding.

As a funeral attendant, she assisted with setting up flowers and others jobs for the service. But she wanted more and after consulting with Stuart, she decided to become licensed as a funeral director.

Stuart gave her advice about the steps she was taking.

"He told me if I wanted to do it, it had to be from the heart, because in this business your life is never really your own. It's not a 9-to-5 job," she said.

She started taking classes at the University of Arkansas Community College at Hope's funeral director program and worked as an apprentice at Jones Stuart.

A lot of details and small steps that go into a funeral service.

"The service may start at 11 but we are there at least two hours before, making sure everything is perfect," she said.

Since COVID-19, funeral services for some of Park's friends and neighbors increased.

It has been a sad and scary time, she said.

"Week after week, we saw some of the same people. People from the same family. It was a very scary time but I couldn't be breaking down," she said. "It can be a lot physically, emotionally and mentally. But it's a reward and an honor to see people get the service they want. I weep sometimes on the way home but it's tears of relief of completion."

The Sandflat community is an important part of Vicki's life. Her church is there, along with the funeral home and her mother grew up there.

She has volunteered at the Sandflat Glendale Shannon Neighborhood Center, commonly known as the Sandflat Center, for about four years.

"I coordinate activities for senior citizens. I come up with projects and bring in speakers," she said.

She missed everyone involved with the center when it closed due to COVID. The regulars who attend the center missed it, too.

"They missed the socialization. Some told me this helps keep them going," Parks said.

She has also taught a Sunday school class for 35 years and has written devotionals that were part of a book of devotionals for women published in 2020.

"That was quite an honor," she said.

In her free time, she unwinds by creating art journals with photos and poems.

Parks stays busy but it's worth it to her to help other people.

"I have that compassion for people and everything I do, I do with a passion," she said. 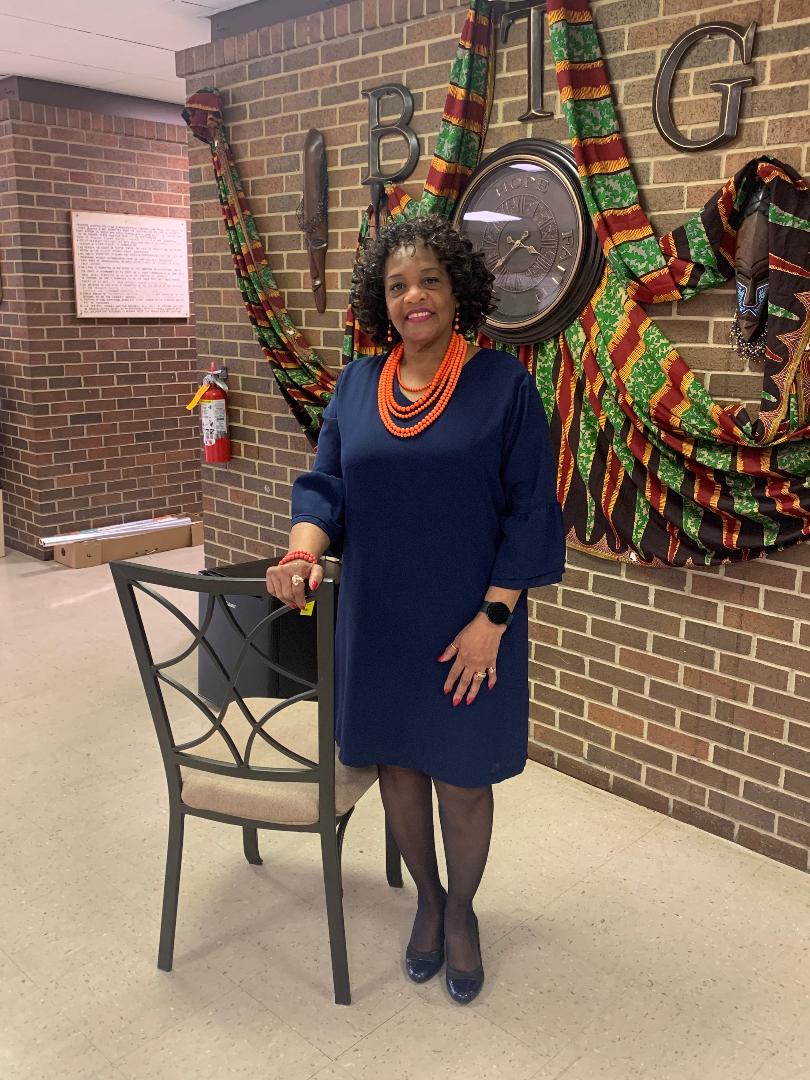 Vicki Parks is a licensed funeral director at Jones Stuart Mortuary and also volunteers at the Sandflat Center. (staff photo by Lori Dunn) 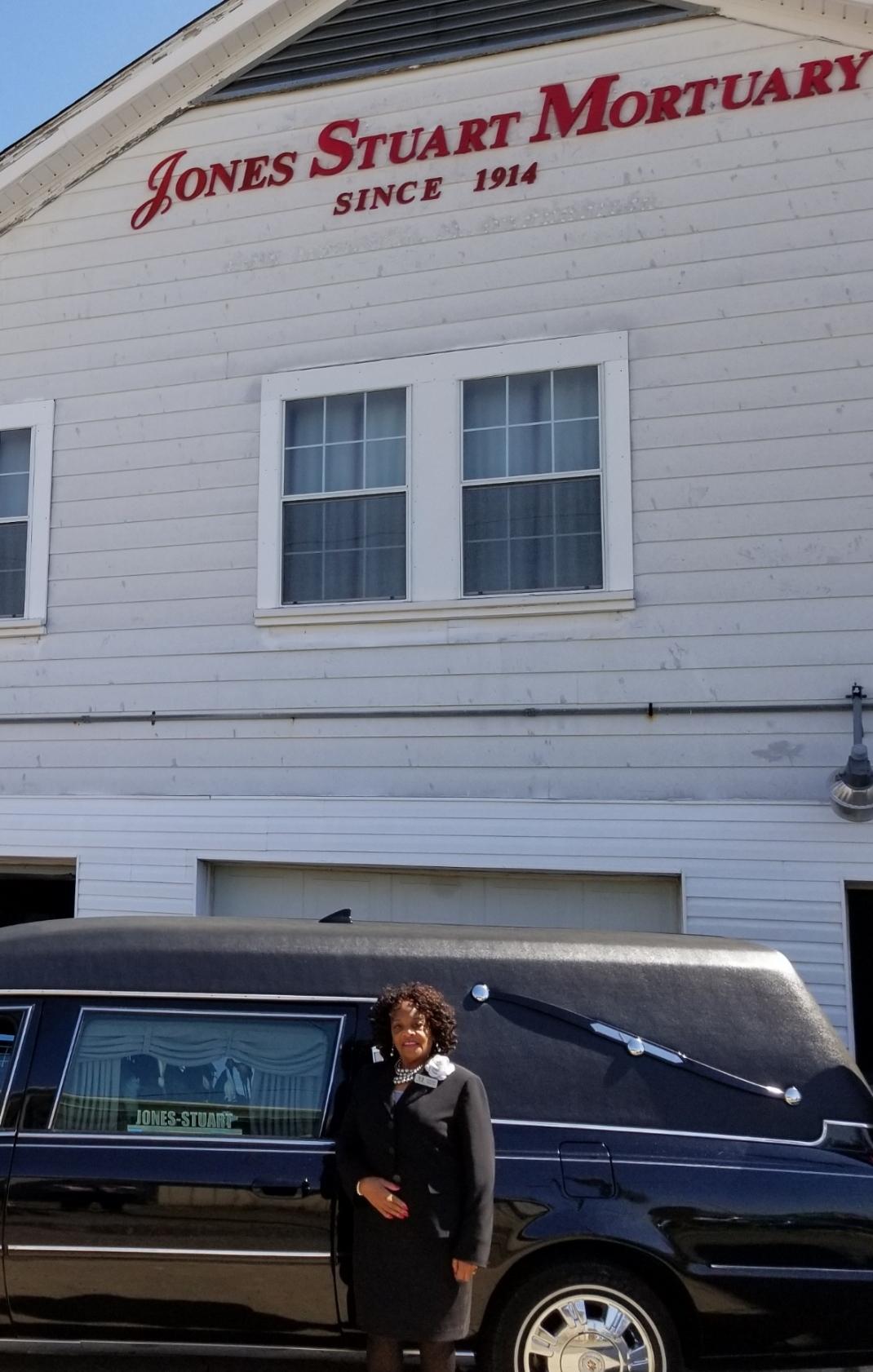 Print Headline: Local woman gives back to community through career with funeral home and volunteer work