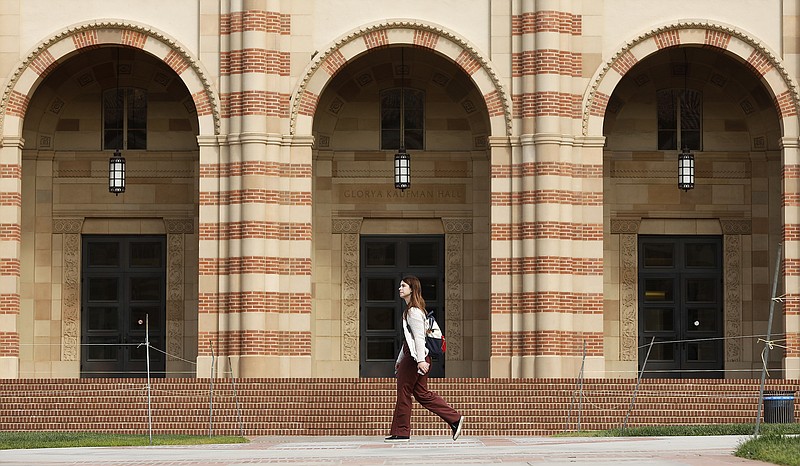 Classes have moved to online only at UCLA on Wednesday, March 11, 2020. (Christina House/Los Angeles Times/TNS)

For those bemoaning the systematic devaluation of university teaching as a career and a calling, UCLA just put a hard number to the complaint.

The number is zero. That's how much one of the nation's premier public universities said it would pay for an assistant adjunct professor in the chemistry department.

In the job posting that appeared this month on UCLA's internal recruitment website, the university specified that "applicants must understand there will be no compensation for this position. " In other words: no salary, no benefits.

There are prerequisites, however: Applicants must have a doctorate in chemistry, biochemistry or an equivalent discipline and "significant experience" in teaching chemistry or biochemistry at the college level; teaching is part of the job description. Three to five letters of reference are required too.

The very idea that a major university would advertise a job for which applicants would appear to be working for free caused an uproar on academic social media.

The reaction of Angela Rasmussen, a virologist at the University of Saskatchewan, was typical: "Are you a PhD-level academic sick of being paid for your work? ... Are you eager to submit a full academic job application for a totally uncompensated adjunct gig," she asked on Twitter. "uclachem has the position for you!"

By the end of last week, the job posting had disappeared. A UCLA spokesman says the original posting "contained errors" and a new one, "correctly written," will be posted. The spokesman, Bill Kisliuk, assured me that at UCLA, "We always offer compensation for classroom teaching."

Kisliuk also rejected online speculation that the job posting was aimed at some specific person -- some even conjectured that it might have been tailored for a scientist fleeing Ukraine but bringing along his or her compensation from another source: "Our positions are open to all applicants." Some thought the original posting might be a joke or hoax, but that appears not to be so.

But the mystery has only deepened. In an apologetic online statement over the weekend, Miguel A. Garcia-Garibay, who as UCLA's dean of physical sciences was responsible for the job posting, wrote, "We recognize the language in this particular advertisement could have benefitted from additional context.... Arrangements such as these are common in academia."

But Garcia-Garibay didn't provide any "additional context." Nor did he explain what about the no-pay arrangement is common in academia. (Garcia-Garibay referred my request for comment to UCLA's communications office.)

Academics don't agree that no-pay teaching jobs are common or, to the extent they exist, are acceptable. UC's own recruitment guide for adjunct professors makes clear that non-salaried offers are suitable only under very limited conditions: Where a faculty member in one department takes on a joint appointment at another, for example.

"The chemistry department's supposed explanation did not address the concerns that many people had about the post," says Mia McIver, president of UC-AFT, the union that in November won a groundbreaking five-year contract for 6,800 UC lecturers.

"What raised a red flag for me, in addition to the lack of compensation," McIver told me, "was that this job posting clearly called only for someone who was going to teach." The union's understanding is that anyone dedicated to teaching at UC should be hired as a lecturer -- a classification that brings him or her under the UC-AFT contract.

"They may be using these appointments as assistant adjuncts to attempt to avoid their obligations under our union contract," she says. "My fear is that UC management's addiction to cheap teaching labor is so strong that our new contract is not going to be honored."

Another issue that may be driving the uproar over the UCLA posting is that the role of adjuncts has evolved over recent years, and not to their advantage. Traditionally, adjuncts were people with outside professional experience or duties and the willingness to share them with students on a part-time basis.

But the term has begun to apply to faculty members kept outside the tenure track, leaving them with low pay and little job security. The adjunct model has been described as "slave labor."

"To be a perennial adjunct professor is to hear the constant tone of higher education's death knell," observed a 2019 article in the Atlantic, detailing the decline and death of Thea Hunter, who worked adjunct gigs in the history departments of a succession of New York-area universities.

"The story is well known," the article stated -- "the long hours, the heavy workload, the insufficient pay -- as academia relies on adjunct professors, non-tenured faculty members, who are often paid pennies on the dollar to do the same work required of their tenured colleagues."

In the 1960's, the Atlantic reported, 80% of U.S. faculty members were tenured or in tenure-track jobs. Now the share is about 25%. At UC, non-tenured lecturers teach one-third of undergraduate classes.

"UCLA has an ignominious history of using contingent faculty without salary appointments," McIver says. The slide toward the bottom started after the Great Recession of 2008-09, she says. "We found there were hundreds of them."

UC-AFT reached a settlement with UCLA in 2016 over the use of unsalaried lecturers.

The regents took that action on the grounds that the UC chancellors as a group were paid less than the median for leaders of public universities nationwide.

UCLA owes its faculty and the public a better explanation for its job-posting fiasco than the tranquilizing statements it has issued thus far. Posting a job carrying no pay is more than a mere wording error; it's an expression of some sort of policy -- but what?

If the posting is a compassionate offer disguised as a routine job, that could be justified but still requires more transparency. If it's aimed at circumventing a negotiated labor contract to save money, that's reprehensible. That's especially so in light of the solicitude the regents recently showed to their cadre of half-million-dollar campus chancellors, supposedly doing so poorly in relation to their public university peers.

The chancellors may feel underpaid, but no one is more underpaid than a professor carrying a teaching load and receiving nothing. So what's this really all about?

Michael Hiltzik is a columnist for the Los Angeles Times.