The console stereo: They just don't make music or memroies like that anymore 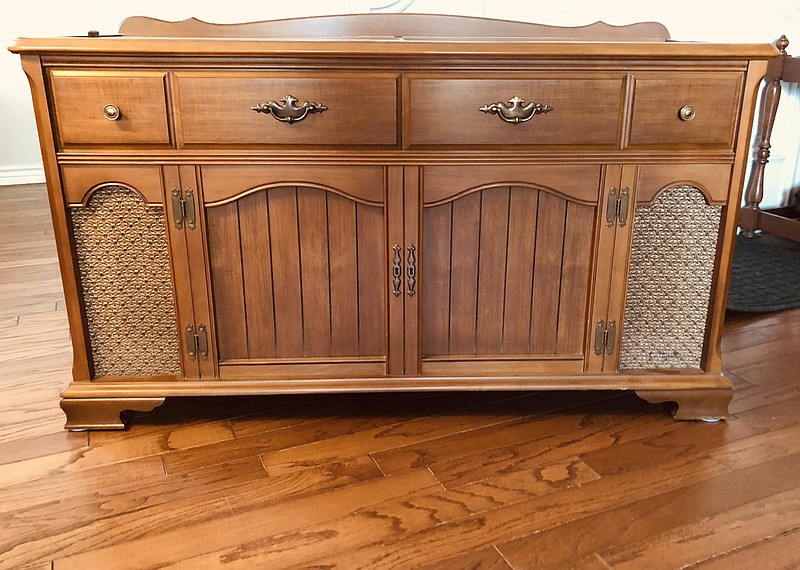 Some days are just lucky ones. Such was the day I found a half-century old console stereo at an estate sale.

It isn't exactly like the one my parents had, but it's sure close.

Today, people stick in an earbud and listen to an endless supply of music on their phone via the Internet. But not so long ago we listened to one artist at a time on the family console stereo.

I start a new job soon and I was thinking about what I would put in my office. I didn't want the standard lamps and tables. I decided that if I could find a console stereo, I'd get one and listen to the radio or records while I worked.

The problem was finding one that wasn't coated in nicotine, still worked, and the wood finish looked great.

That's the thing about the old console stereos. They were made out of real wood. Nice wood. And they are heavy.

My search began. I set alerts online and waited. A few popped up, but they didn't meet the criteria.

Then a message of one came through that showed promise. A 90-year-old lady was moving from her home and her family was selling her possessions for her.

I arrived on a beautiful day. Temp was in the 60s, it was sunny, the wind was just right. Perfect day to transport something you want kept from being harmed by the elements.

The woman wasn't there, but her granddaughter showed me into the living room.

The console stereo was a Magnavox. And it looked like the day it was brought home from the dealer.

That's the thing about this lady's generation. They lived through the Depression, so they treated everything as if it belonged to royalty.

This is the same group of folks who put clear plastic covers over their living room furniture and didn't allow anyone to sit on it.

I examined the console. This lady still had the owner's manual.

My guess on the age of the unit was early to mid-60s. I was close. Later research showed 1964.

We turned it on and tuned the radio to an FM station. As I dialed the volume up, the room filled with that unmistakable audio quality that only the old console stereos produce.

Took me back to being on my stomach on the shag carpet in my parents home, listening to Simon and Garfunkel and reading the liner notes on the album cover.

I thought back to listening to my first 45 rpm single I bought with my own money for 78¢ from the rack at the grocery store in Ashdown, Arkansas. (Ashdown wasn't big enough to have a music store.)

Recollections came of our old RCA console, and my dad listening to, "When You're Hot, You're Hot," by Jerry Reed, and other albums by The Ink Spots, Jimmie Rodgers, Charlie McCoy, Johnny Cash, and many more.

My sister and a house full of her friends would dance in front of the stereo as they listened to The Hustle.

I thought back to learning to play the guitar. I didn't have access to sheet music, so I played by ear. I learned popular songs by getting my hands on the record and listening to it on the stereo.

I'd put the needle on the vinyl and listen to the first few bars, strumming my guitar and trying chords until I figured out what the artist was playing. Putting the needle on the next part of the song, I'd then figure out the next chord changes.

And so it went until I'd learned the whole tune.

I remember my first rock band practicing in the room where the console stereo resided. Each band member would listen to whatever part of the song they needed to learn.

This was the way you did it before the Internet.

That old RCA could do right by any type of music we asked it to deliver.

Wish my parents had kept their console stereo. But like so many things we wish we could have back, most of us felt at the time that the items had served their purpose.

I can't bring back my dad or my sister. I can't restore youth. But I can certainly put on some Simon and Garfunkel and Johnny Cash. I kept many of my dad's records when he passed.

A console stereo is just like the memories it recalls. And they just don't make either of them like they used to.

Print Headline: The console stereo: They just don't make music or memroies like that anymore