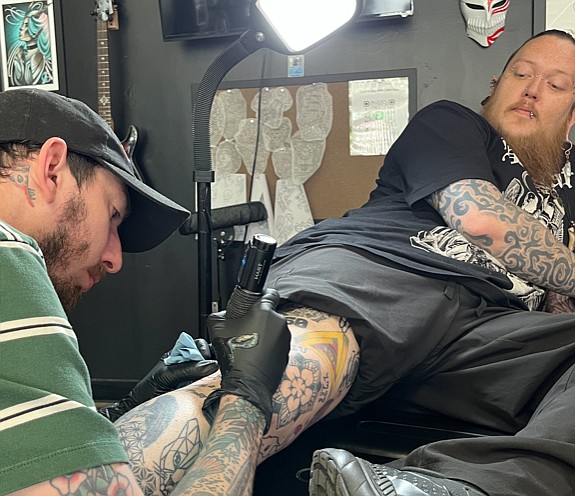 Quest May, left, son of Body of Art owner Kara May, tattoos Josh Hildebrandt on Tuesday in Texarkana, Texas. Body of Art, like other tattoo shops in the Texarkana area, was able to open up and continue tattooing following a two month shut down in the spring of 2020. (Staff photo by James Bright)

TEXARKANA — As COVID-19 continues to wane, service industries across the country are beginning to see a return to life similar to that of 2019. Some had to make permanent adjustments, while others only needed temporary stop gaps.

Locally, Texarkana’s tattoo industry continued to boom following the early days of the pandemic. Shops had to close for just over two months in 2020, but once they were able to open back up there were customers aplenty and the trend shows no signs of slowing down, according to several local shop owners.

“It was rough for those two months that they made us close down,” Texarkana Ink Co-owner Thomas Wester said. “And then once we opened back up, it was insane. The amount of people who were tired of sitting around in their house that wanted to get out and get a tattoo, or just do something in general was huge.”

Texarkana Ink wasn’t the only store to see a surge following pandemic lockdowns, but the road back to prosperity was a tough one to hoe. Kara May, owner of Body of Art, said after two months of missing out on business she and some of her colleagues decided to head to Austin to let their voices be heard. Other service industry businesses had begun to open up with new pandemic safety protocols, but there was still no information on when tattoo shops could continue honing their craft.

“Another artist and I went to this huge protest in Austin,” she said. “It was pouring rain and it rained on us all day long, but we drove down and did a huge peaceful protest at the Capitol. We were there a couple hours, and we were like, ‘We just need you guys to tell us where are we on the list to open back up?’”

May and her colleagues returned with no concrete answer, so she tried a different tactic, contacting Texarkana, Texas, Mayor Bob Bruggeman.

“And he said, ‘You know something, if hair places can open, you guys can too,’” she said.

May waited until the following week after talking with Bruggeman before making the decision to reopen her shop.

“And it just got back to normal really, really fast,” she said. “The only thing that I think is any different is people still think everything’s by appointment. They always call, or message the Facebook page, or text their artists and go, ‘Hey, I need to make an appointment.’ And we’re like, ‘Hey, you know, you can just walk in anytime. We’re good with that.’”

May said upon reopening she and her artists respected the will of the customers regarding preventive measures. If that meant wearing a mask during a tattoo, then her staff was ready to do it.

Wester said they employed a similar approach at Texarkana Ink, which was odd to his crew at first.

“We did have to take extra steps,” he said. “We were checking people’s temperature when they walked in the door and everybody wore masks, so it’s definitely something that took some time to get used to.”

Still, there were some shops that struggled with the uncertainty surrounding the pandemic and how it affected their artists’ jobs.

“Honestly, mostly it was just stressful, that the PPP (Payroll Protection Program) loans weren’t very clear,” Steve’s Tattoos Artist William Moore said. “Nobody knew what was really going on with it. It was like, ‘Do I do PPP? Or do I do unemployment?’ You know, ‘If I do the PPP loan am I even going to get reimbursed?’”

Moore said as someone who was self-employed, the unknowns played a large role in his decisions early in the pandemic.

“It just came down to the question of what is even going to happen,” he said. “We didn’t know anything. We’re just waiting every single day wondering, when are we even going to be able to do anything?”

Now, with the pandemic hopefully in the rear view, Moore said he enjoys some of changes that his business underwent during the trying times.

“One of the nicer things, I think, is that everybody is going to mostly switch to appointments,” Moore said. “I love that. That’s great. I know what is going on every day. I’ve got my drawings ready to go instead of just hoping something comes in the door and hoping I can I have one done up fast enough to be financially efficient. This is much better for me. I think it’s better for the customers. And that’s great.”

There are still some lingering effects of the pandemic that coupled with inflation are causing some trouble for all three shops. Moore, May and Wester said the cost of goods, specifically gloves, have gone up exponentially in the past year.

“Supplies have been harder to come by and they cost more, and unfortunately, prices have had to go up because of that,” Moore said. “That’s horrible. Now we have to deal with inflation, and that’s causing more problems. I am wondering right now, am I going have to go up again? I hate doing that to my customers. But I mean, I’ve also got kids I have to feed.”

May echoed this sentiment citing gloves as the leading item with recent cost increases.

“Everybody here uses black gloves, so it’s just a little bit different,” she said. “It used to be our gloves were somewhere between $14 and $15 a box, and now we’re paying upwards of around $29.”

Still, despite the price increases and difficulties presented by the pandemic, all three shops are happy with what they have seen from their Texarkana customer base but are also still open to taking precautions.

“I still see a lot of people still being really careful, because there are new variants coming out constantly,” Wester said. “So I mean, I sit somebody in my chair, if they even have like a sniffle, I have to ask, ‘Hey, what do you got going on?’ It’s definitely not something I did two years ago.”