State champ Whiseant is an essence of success 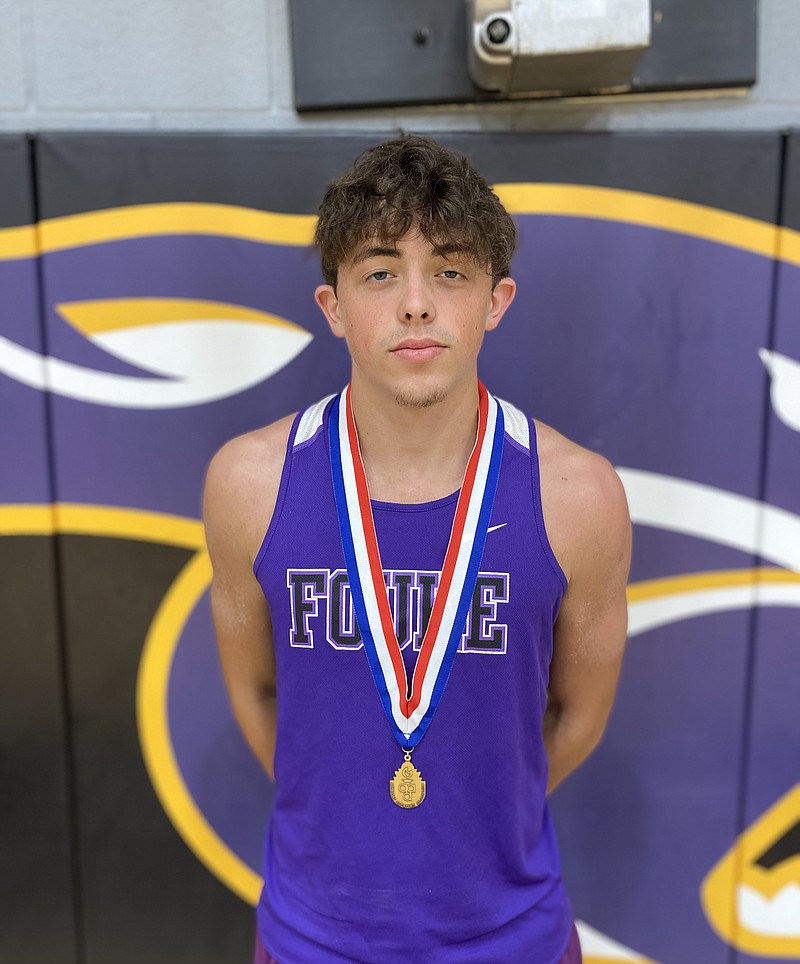 Photo by Mo Williams. Fouke's Kirby Whiseant earned a gold medal after his Class 3A first place finish in the 800 meters at the Arkansas state meet in Lincoln, Arkansas, on Tuesday.

Whiseant, a junior, began his competitive track & field career just a year ago and has already won a state championship when he crossed the line first in the Class 3A 800-meter run on Tuesday in Lincoln, Arkansas.

Taylor Collum, who is in his first year at Fouke, is Whiseant's track coach.

"Kirby was seeded seventh going into the race, so he was an underdog," Collum said. "He is a great athlete. I told him to go out there and be a competitor; and he did. Kirby had the best time. It was really exciting. Afterwards, he was offered a scholarship on the spot by Ouachita Baptist University's track coach. Overall, it was a great day for Kirby."

Whiseant, who finished in 2:05.89, beat out Central Arkansas Christian's Andy Landes (2:06.05) by .16 seconds to earn first place. Whiseant crossed in second place at state last year in the 800 meters.

"He is a great kid," Collum said. "Kirby is really smart, is independent and takes care of himself. He is also a good football player. He does all of the work and I watch him. He is one of those 'Once in a Blue Moon' type of kids."

Whiseant is highly motivated to get a college degree and be successful in life. He is interested in a career in the medical field.

"I enjoy hanging out with friends, eating, fishing and spending time with family," Whiseant said. "I also go to church on Sunday mornings, Sunday nights and Wednesdays.

Whiseant is one of the youth leaders at Faith Baptist Church in Texarkana, Arkansas.

Whiseant said his main secrets to success are a natural talent for running, training hard and eating right.

His track season is not quite finished. Whiseant will compete in the penultimate Meet of Champions at Russellville High School on Wednesday.

The meet pits the champions of classes 1A through 7A against one another in an epic track & field final showdown.

Print Headline: State champ Whiseant is an essence of success