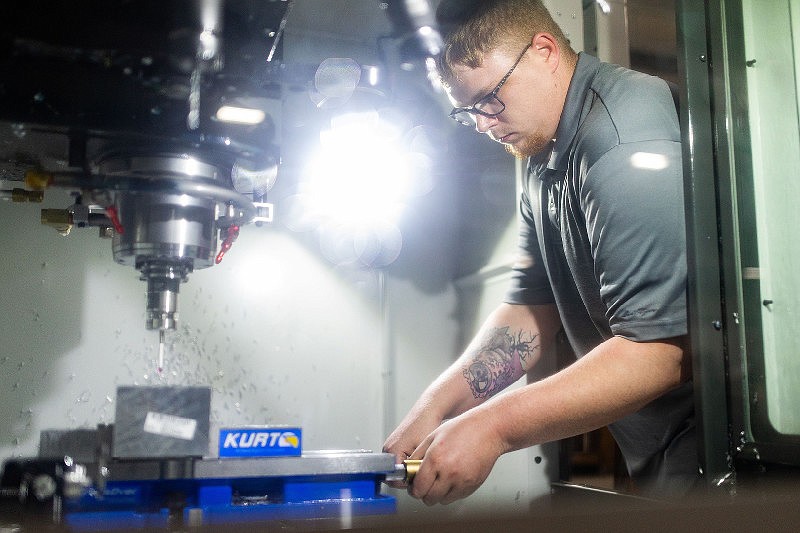 Alex Murdock, assistant in the Electrical, Industrial Maintenance and Instrumentation programs at Texarkana College, performs a demonstration using the HAAS DM-1 CNC machine. The machine's purpose is to remove material precisely, up to .0001 inch. The program is an example of the type of workforce training the Texas Higher Education Coordinating Board is emphasizing in its latest strategic plan. (Gazette staff photo)

"Building a Talent Strong Texas" expands attainment goals to include all working-age Texans, including nontraditional students. In doing so, the state aims to increase employment opportunities and income for individuals, create a deeper talent pool for employers and align skills with the jobs the workforce demands.

Targets for this goal include:

• 60% of residents ages 25-34 with a degree, certificate or other high-value postsecondary credential by 2030.

• 60% of residents ages 35-64 with a degree, certificate or other high-value postsecondary credential by 2030.

Dr. Donna McDaniel, vice president of instruction at Texarkana College, said the goals go hand in hand with what TC is trying to do.

"We were really excited when they expanded the ages from 25-34 to 25-64," McDaniel said. "That really aligns perfectly with our mission, because we are working on helping to build a stronger workforce and re-train and re-skill our existing workforce, and that goes beyond 34-year-olds."

Melinda Arnold, provost and vice president for academic affairs at Texas A&M University-Texarkana, said it was time for the plan to be updated.

"Its focus before was a much narrower age range. And the bottom line is that Texans of all ages seek education, whether they've gotten a degree, worked toward a degree or are in a job where they want to do something else that requires some other kind of credential," she said. "I think the report makes more sense because it's more inclusive of all Texans."

"The strategic plan for the coordinating board has right-sized itself with the way the rest of the nation is thinking," she said. "Here at the local level, we talk about certificates all the time. We're constantly thinking about those additional credentials or classes that people might need."

The plan builds on the board's previous 60x30TX plan and is organized around three updated goals with expanded metrics. Besides inclusion, the other two primary goals in the plan are --

• Credentials of value: Ensure that 550,000 students annually complete a postsecondary credential that is aligned with workforce demands, will raise incomes and will reduce debt, so that 95% of graduates have no or low debt. Texas would be the first state in the nation to tie completion goals to increased earnings associated with credentials.

• Research: Increase annual research expenditures by $1 billion, and award 7,500 research doctorates annually by at least 2030. Texas must be a leader in research that drives discovery, improves lives, broadens education, and creates new jobs.

"We have a low student loan-debt ratio for Texarkana College, and we do pride ourselves on that because we offer a very affordable credentialing and education," she said. "Our students don't have to have a lot of debt to get credentialed to start in the workforce."

Arnold said the plan is also designed to highlight the long-term return on investment of pursuing higher education.

"One of the arguments nationwide is that investing in a higher education, what's the (return on investment) on that?" Arnold asked. "How is the amount of money that it takes to get through school manifesting itself when someone leaves school and goes into the workforce?

"And the research generally tells us that people who get degrees do better, earn more money in their lifetime, than people who don't."

Arnold and McDaniel said their higher education institutions are committed to following the new plan's goals and emphasizing the importance of education in the region.

"That's not just the Coordinating Board's plan, that's what we're all trying to do -- make sure that Texans understand that higher education is accessible," Arnold said. "And it's accessible in your own backyard, like in Texarkana for example."