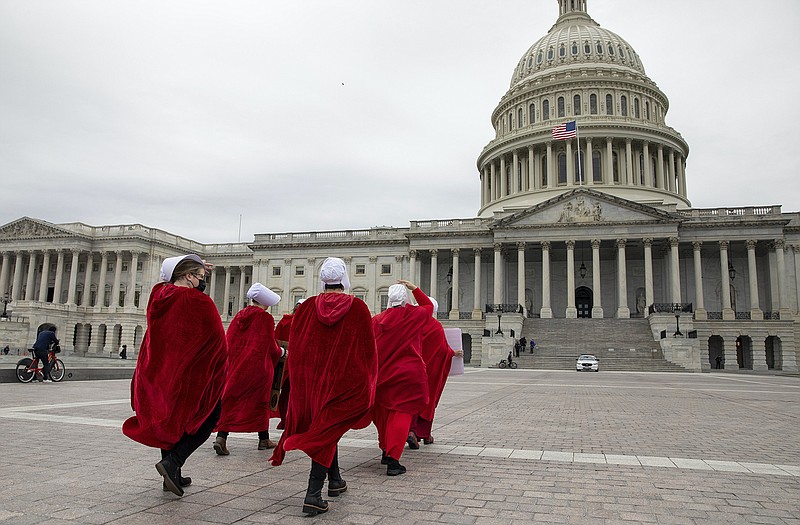 Abortion-rights protesters dressed in costumes from the “Handmaid’s Tale” walk to the U.S. Capitol building during a demonstration in Washington, Sunday, May 8, 2022. A draft opinion suggests the U.S. Supreme Court could be poised to overturn the landmark 1973 Roe v. Wade case that legalized abortion nationwide, according to a Politico report released Monday. (AP Photo/Amanda Andrade-Rhoades)

Gov. Asa Hutchinson said Sunday that he does not support a possible Republican push for a national abortion ban.

He reiterated his belief in states having control over the issue.

Hutchinson made the remark Sunday on ABC's "This Week" program when asked about comments from U.S. Senate Minority Leader Mitch McConnell to USA Today about a "possible" push for a national abortion ban.

The governor, who has recently said he is considering a run for president and has been appearing on Sunday network and cable television programs, has maintained a strong states' rights platform throughout his term and continued that in his responses Sunday.

"That's inconsistent for what we have been fighting for for four decades, which is that we wanted Roe v. Wade reversed and the authority returned to the states," Hutchinson said in response to the question. "As a matter of principal that's where it should be."

Arkansas Attorney General Leslie Rutledge announced last week that if Roe v. Wade is overturned by the U.S. Supreme Court, the state's "trigger law" will immediately go into effect. Her announcement came after news accounts about a leaked draft of a U.S. Supreme Court opinion to overturn the 1973 abortion rights ruling.

Act 309 of the 2021 regular session enacts a near-total ban on abortions in Arkansas, allowing the procedure only in instances when the life or health of the mother is in danger. State legislators passed the bill without exceptions for rape or incest, despite calls from a handful of lawmakers to include those exceptions.

Hutchinson signed the state law on March 9, 2021, even though he said would have preferred it to include exceptions for rape or incest.

The law was passed in preparation of a possible overruling of Roe v. Wade.

On Sunday's program, Hutchinson continued his support for state control when he said that Arkansas' trigger law "expresses the will of the people of Arkansas.

"The fact is, each state has different views on where we should have abortion restrictions," Hutchinson said. "That division has been going on for decades and it will continue after the Supreme Court decision."

Jerry Cox, founder and president of the Family Council, a conservative and pro-life organization in Arkansas, said each state having authority over the issue will likely result in a patchwork of different laws around the nation. He said some states would likely make abortions illegal, while others would have less-restrictive abortion laws.

In a prepared statement, Holly Dickson, executive director of ACLU of Arkansas, also responded to the governor's comments Sunday.

"Whether it's state lawmakers or members of Congress, the politicians passing abortion bans have proven they won't stop pushing care out of reach no matter the impact on -- or will of -- the public," Dickson said.

Hutchinson also was questioned about the trigger law having no exceptions for rape or incest during the program.

"I expressed whenever I signed the law that I would prefer the rape and incest exceptions be in there," Hutchinson said. "Even though we have a trigger law, I expect those exceptions to be a standard part of the debate in the future."

Hutchinson went on to say that while he believes life starts at conception, he supports the exceptions because they help gain public acceptance.

Cox's opinion conflicted with the governor's on the issue.

"We shouldn't punish the child for the crimes of the father," he said. "Rape and incest are terrible crimes. Anyone who commits those crimes should be punished to the fullest extent of the law. The abortion does not erase the hurt or trauma of the rape or incest of a victim."

As one who believes that life starts at conception, Cox said he understands it is a difficult choice.

"We can't simply support taking the life of an unborn person because of how that person was conceived," he said.

Dickson also was not in agreement with the governor.

"Any attacks on reproductive freedom target people and families who are already some of our most vulnerable Arkansans," Dickson said.