Jan Porter shows his two major instruments, the large field and the narrow field celestial telescopes on their concrete posts ready to be turned upward to the sky. (Photo by Neil Abeles)

Jan Porter is photographing a galaxy in the sky 31 million light years away from us. It'll take him 10 to 15 hours to finish the project.

The result will be the galaxy image bonded to a glass plate. This view of the night sky can be purchased from Lodi Skies Astrophotography, the evening hobby Jan and his wife Allyson have established in the past two years.

Their night time observatory is located near the community of Lodi at the southern edge of Cass County and its meeting with Marion County.

The galaxy being photographed this evening is called the Whirlpool Galaxy. It's located in a special constellation called the Cane Venatici.

Its distance is too far to imagine, but at least knowing its name is the beginning of a friendship. Once the earth observer recognizes Whirlpool and becomes familiar with it, one at least feels comfortable having some knowledge of the universe. And it does look like a spiral.

As for Jan, the amateur astronomer?

"I just feel, 'Wow' about astrophotography. It may be a little of a spiritual journey, but mostly it's a personal skill I like to improve on. It's mind-boggling."

The galaxy image and other stellar portraits can be found at the Porters' Rumbles Attic section of the Tethered antique store on East Hiram Street in Atlanta or at Red Door Chicken Coop in Texarkana.

Such a visual will cost only a few dollars, but it will show something that as far aw we know, only earth-bound humans have seen and which may never have been seen by any other being in the existence of the universe. That's a long time. The universe is, scientists say, some 13.7 billion years old.

That should be unique enough for the galaxy print to be mounted with a bouquet of flowers and placed on the wall or shelf.

But that's enough impressive mentions of a million light years. The question is how and why does Jan do it? Why is he putting Lodi, a hill in Cass County, on the earth's map?

First there's the personal reason and then the equipment.

Jan is the son of the late D.R. Porter of Atlanta, a building contractor, and Jan's mother Louise, a well-known Atlanta elementary school teacher. Graduating from Atlanta High in 1971, he then earned his degree from the University of Texas at Arlington and is now a retired certified public accountant, having returned to Lodi and Atlanta from Houston.

Always interested in telescopes, Jan has progressed from small systems to ones which can produce striking images. He and Allyson acquired their home on a tall and spacious hill near Lodi, which generally has clear night skies free from artificial light pollution.

The two built their observatory and installed two telescopes on firm concrete.

"It's galaxy season right now. Time for making photographs," Jan said, describing the process as opening the observatory, and powering up the computer which will guide the telescopes and cameras to the chosen object. That object is photographed many times during the viewing as the computer compensates for the movement of earth through the skies.

Once the images are combined and improved, they are sent to a company in Florida which prints the image on glass. Allyson then artistically mounts and frames the images to be offered to the public.

Jan is quite independent with his project. He's a searcher. He doesn't lecture but will give explanations if asked.

"We can see the Milky Way from here," the two say. "There's the glow on the horizon of Shreveport, Longview, Texarkana. It's beautiful. You just come away thinking there's so much potential for life on other planets."

Astrophotography, also known as astronomical imaging, is the photography or imaging of astronomical objects, celestial events or areas of the night sky.

"Most images are composed of 10-15 hours of exposure time and then processed to bring out the faint details with special computer software.

"Care is taken to maintain the original color of the deep space object. Images are then printed directly onto glass and mounted to special backing, ready to be hung on a wall, framed or displayed on a table or shelf.

"Each picture includes a short description and the year in which it was photographed. We hope you enjoy these night sky images as much as we do."

"If people sat outside and looked at the stars each night, 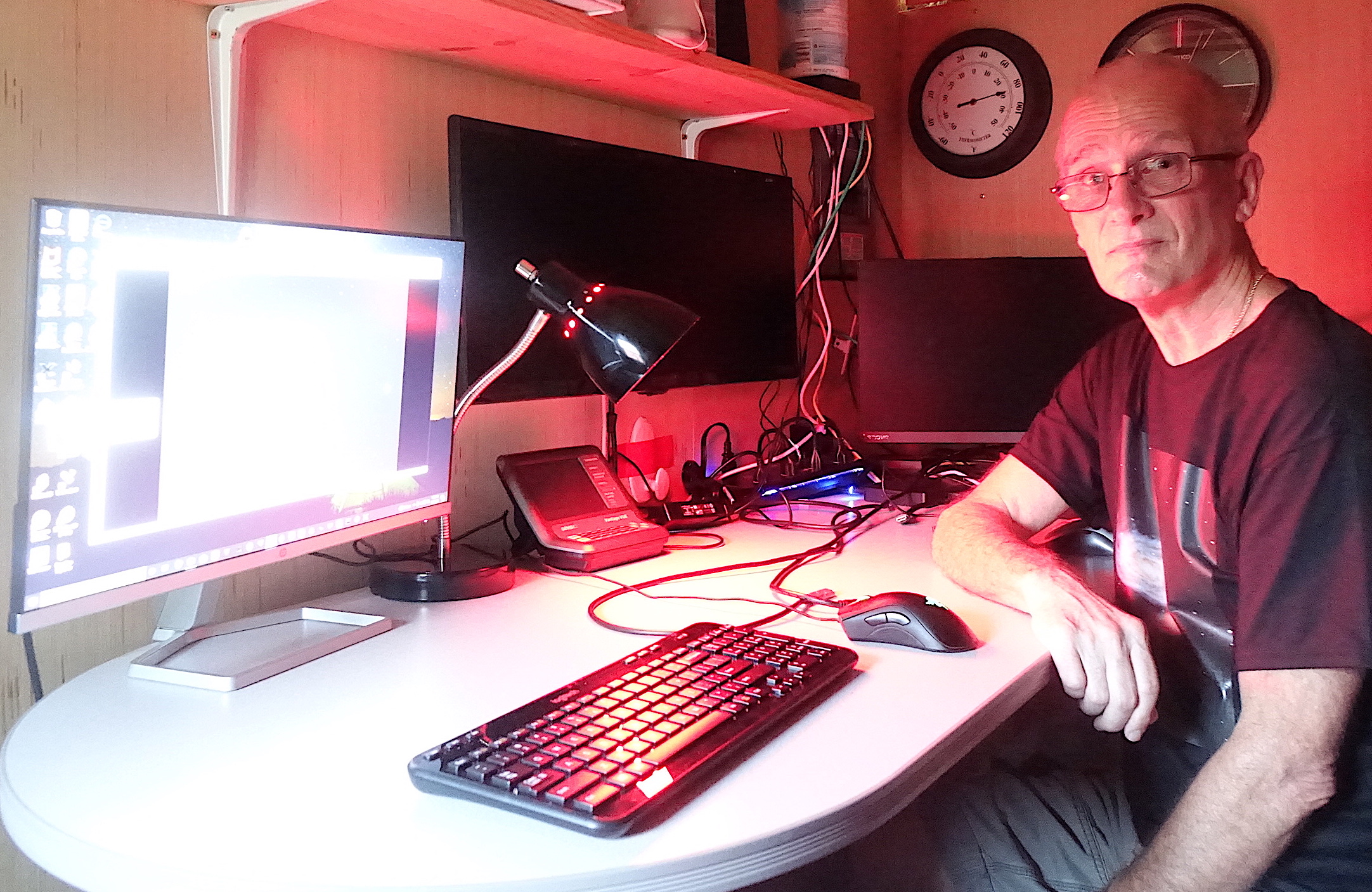 Jan Porter is certainly deep inside his earth cave even as he is studying and processing at the computer views of the universe’s night sky. (Photo by Neil Abeles) 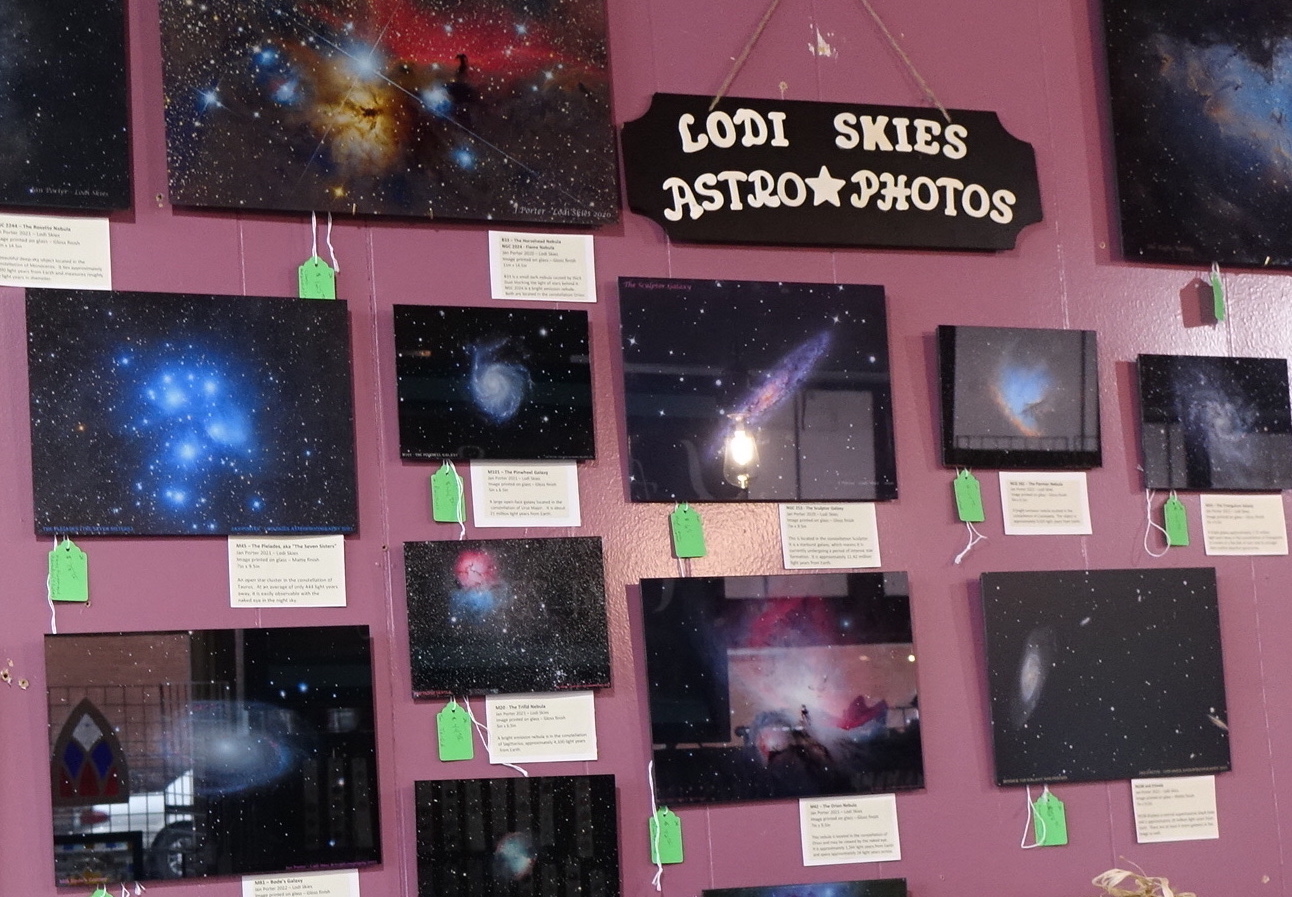 The result of a highly passionate hobby is items to be shared with others. These are on the wall at Tethered on East Hiram St. in Atlanta. (Photo by Neil Abeles) 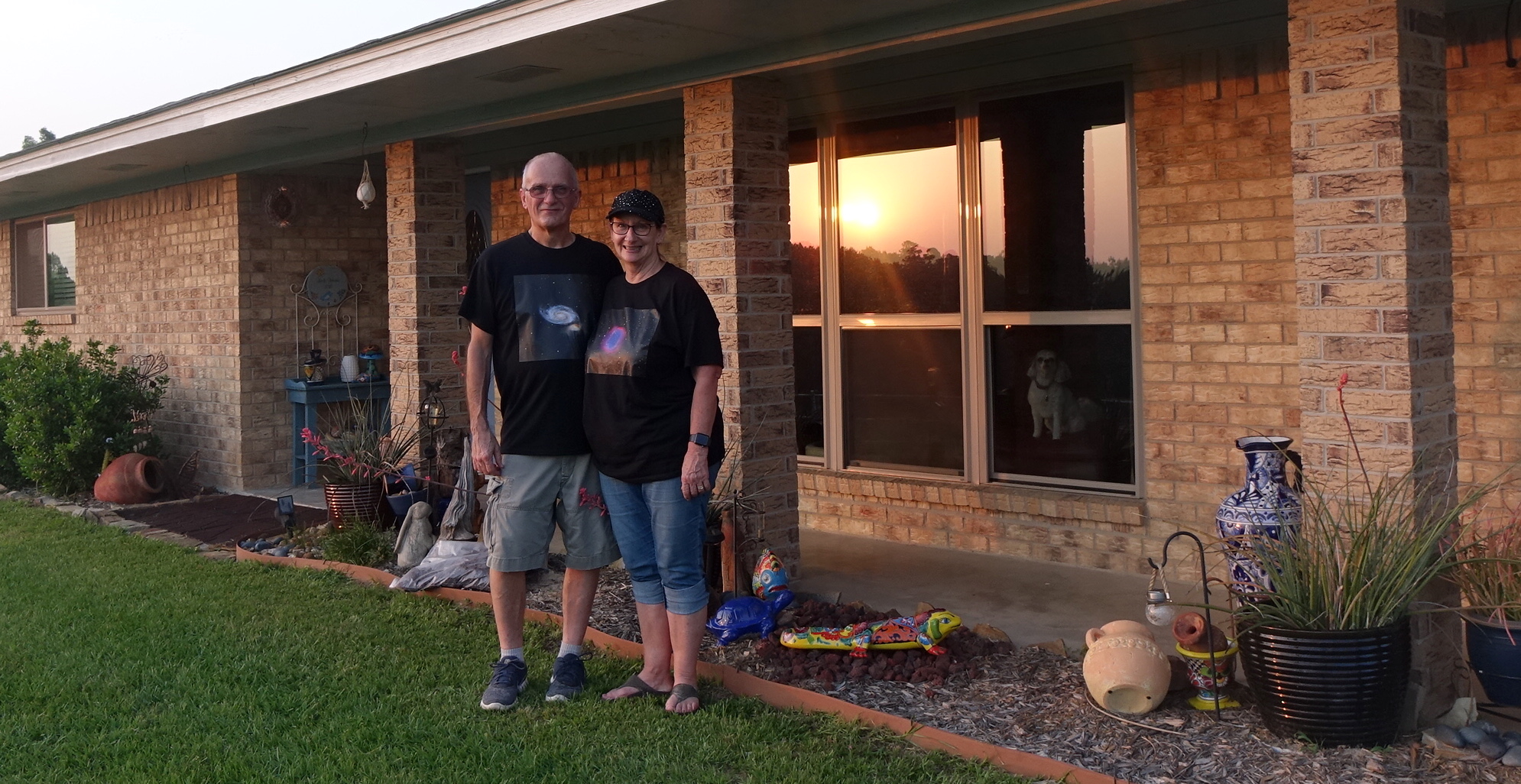 Jan and Allyson Porter are shown at their home on a hill in Lodi, Texas. An Atlanta native and 1971 Atlanta High School graduate, Jan has returned to Cass County to be at home. Allyson is from Lubbock. (Photo by Neil Abeles) 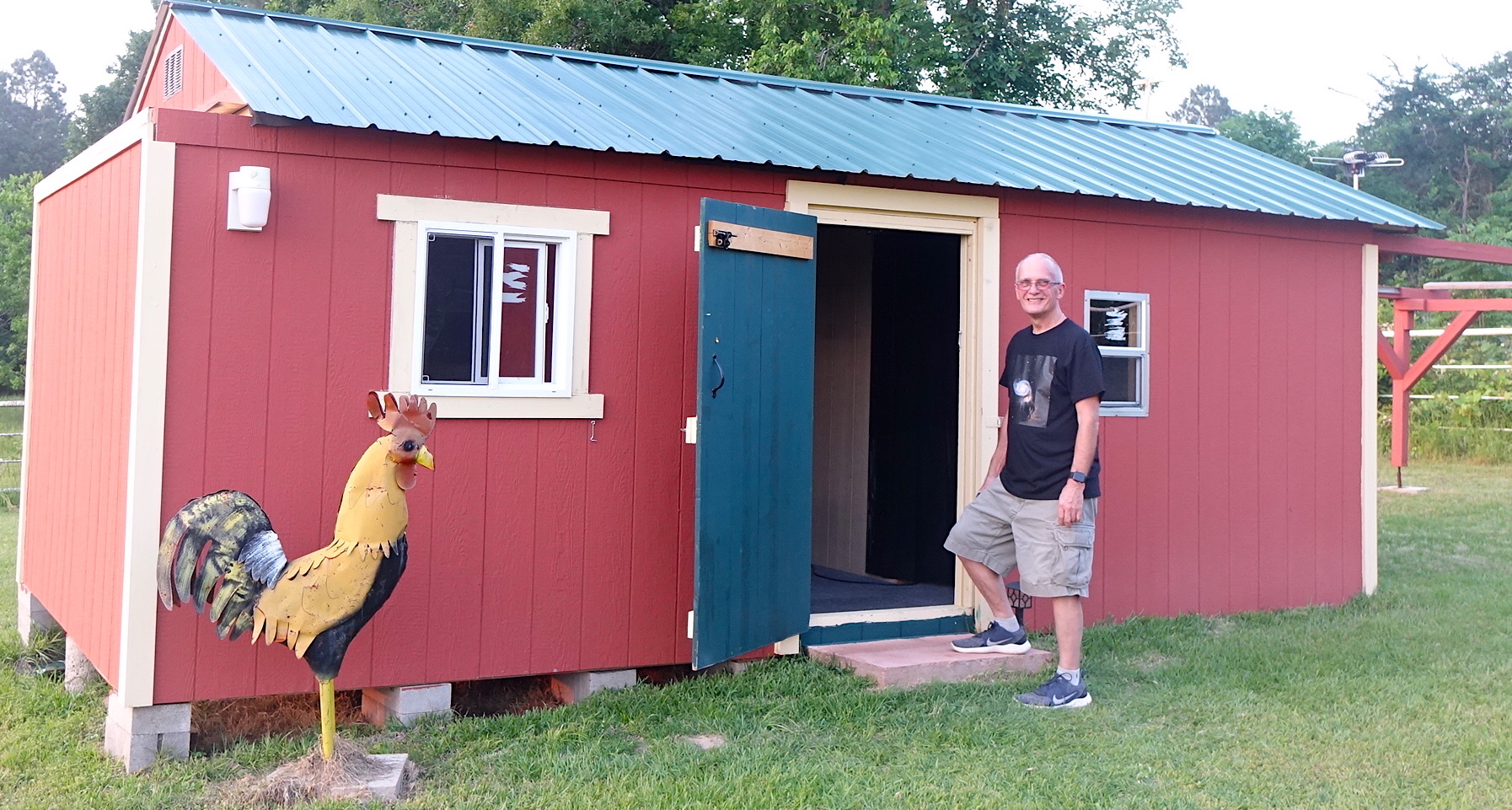 The rooster is just a friend, although Jan Porter the astronomer may, indeed, stay all hours of the night inside his observatory. Then he needs the call of the chicken when morning arrives. (Photo by Neil Abeles) 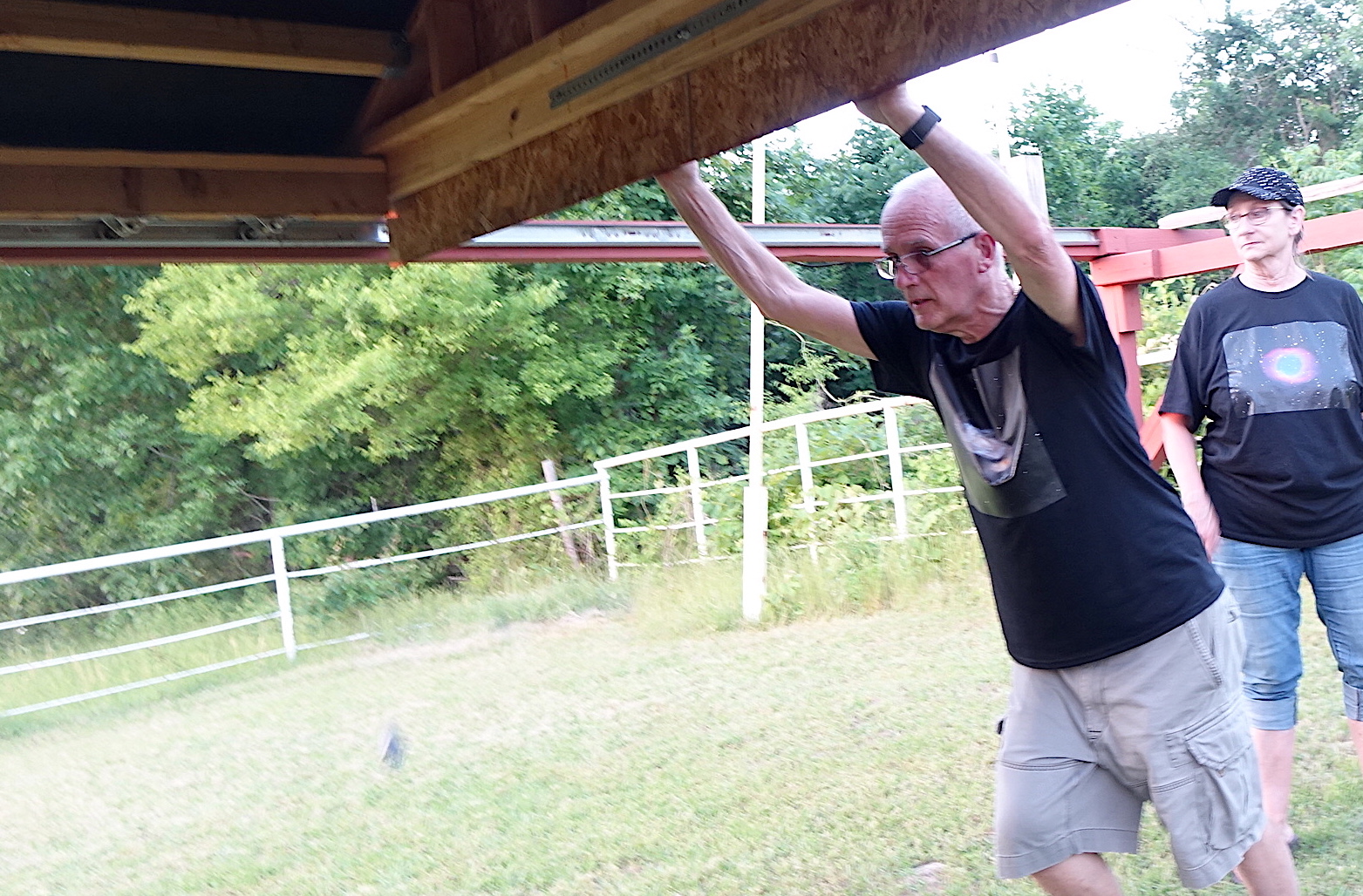 Opening an observatory is not always a piece of cake. So don’t just drop in. (Photo by Neil Abeles) 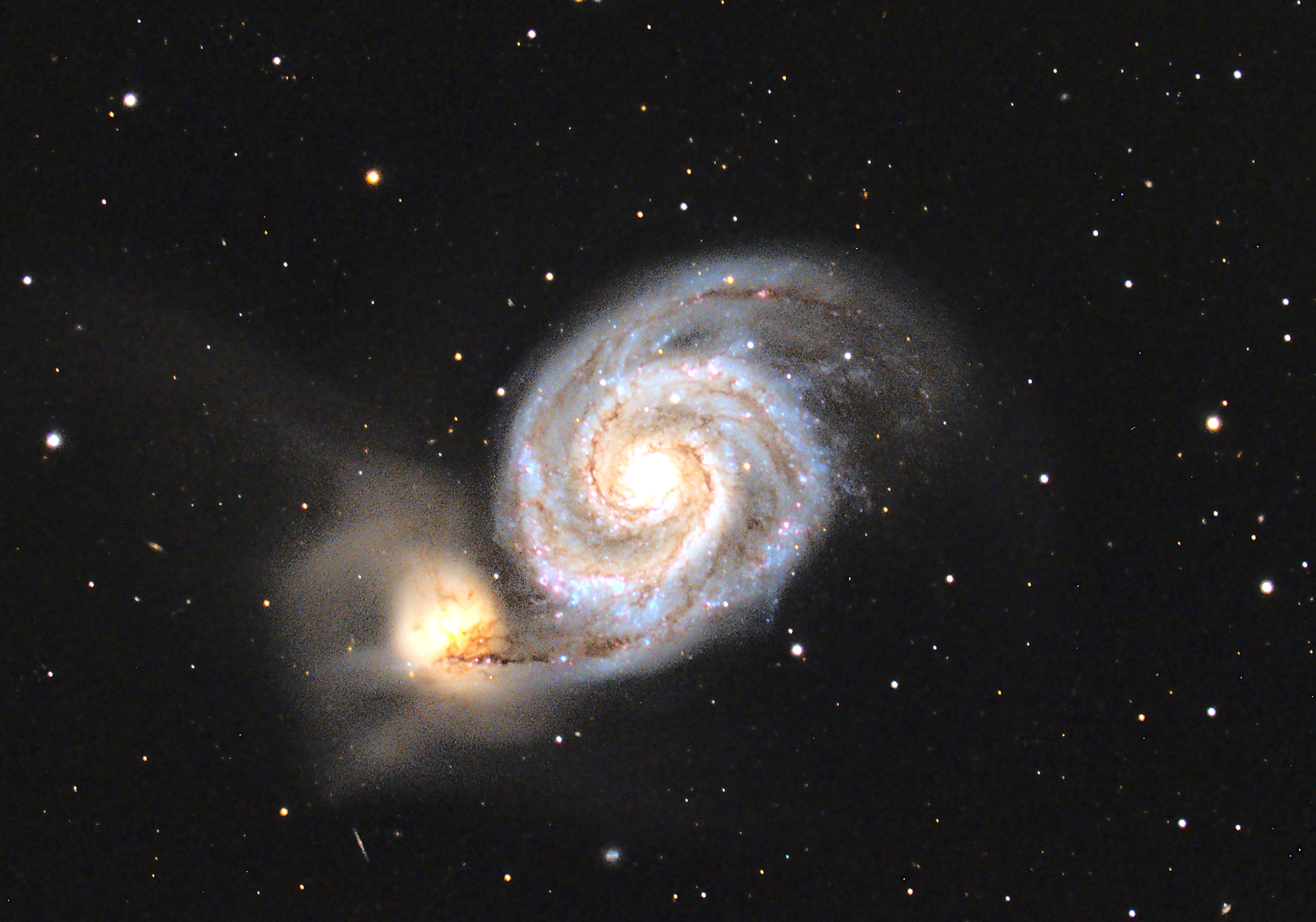 Some 31 million light years from us … enough said. (Photo by Jan Porter)