You may be cleaning all wrong 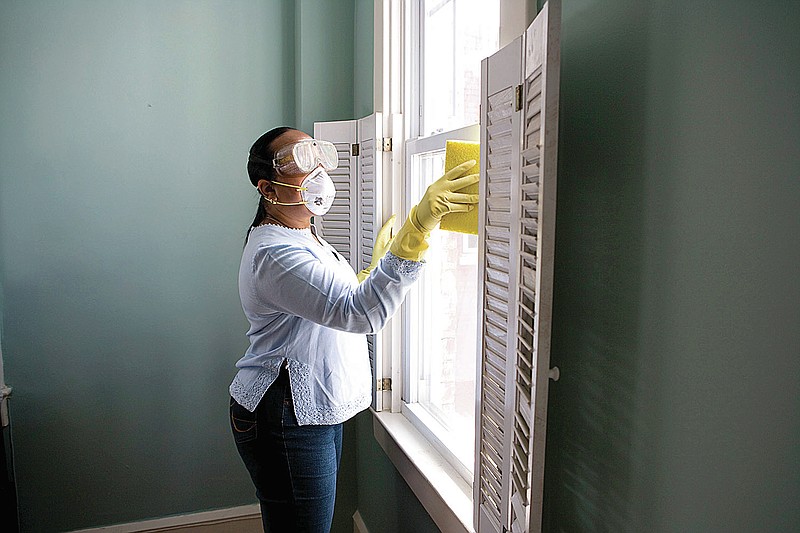 One of my first memories is the pungent smell of rubbing alcohol. Every evening, my mother sprayed the kitchen sink and counters with isopropyl alcohol to disinfect them. And no wonder: She had cared for me for months when I caught a nasty salmonella infection as a toddler. Bacteria were her nemesis. "I became a real nut about it," she admitted recently. "I really became a germaphobe."

It's no surprise, then, that I grew up to be a germaphobe too. I keep a dizzying array of antimicrobial wipes in the basement; have at least seven bottles of hand sanitizer stashed around my house and car; and keep an emergency bag tucked away in my closet stuffed with bleach wipes and other strong disinfecting paraphernalia should the dreaded stomach bug strike our household. (I should add: There's a difference between cleaning and tidying. I'm a zealot with the former but lazy with the latter.)

Today, because of the pandemic, I'm not alone in my germ paranoia. In a survey last year of 2,000 U.S. adults, 42% of respondents said they identified as germaphobes. But our fears aren't always well-founded, I learned when I interviewed chemists and cleaning experts. It turns out, many popular cleaning practices aren't effective, and some are just unnecessary.

Focus on the Bad Bugs

I'm often guilty of thinking that viruses and bacteria are unequivocally bad, but many bacteria do good things -- like those in our gut that help us digest food and build our immunity. "Microbes are absolutely everywhere," said Erica Hartmann, an environmental engineer at Northwestern University. "And that's not necessarily a bad thing." Research suggests that children who grow up on farms, surrounded by microbes, have a lower risk of developing asthma and allergies than other kids.

Before getting into the nitty-gritty, let me explain the scientific difference between cleaning and disinfecting. Cleaning removes things -- dirt, crumbs, germs, dog hair -- from surfaces. Disinfecting kills things -- typically viruses and bacteria. Cleaning is something we may want to do regularly, Hartmann said, but we need to worry about killing (disinfecting) only dangerous, disease-causing germs. And we can often predict where they will be.

For instance, you probably don't need to disinfect your kitchen counters every day, unless you have handled raw meat. You also don't need to obsessively disinfect your bathroom unless someone in your home has an infection that spreads through stools, like salmonella or norovirus.

For standard messes -- like when my 11-year-old drips maple syrup all over the kitchen table at breakfast -- you don't need to reach for a disinfectant wipe when soap and water will remove the sticky residue. (Soap is also great for removing germs from your hands, but you need to build a good lather and wash for 20 seconds.)

You ask, Why not disinfect everything anyway?

There are long-term risks associated with the overuse of certain disinfectants, such as quaternary ammonium compounds. These "quats," as they're called, are found in many popular household cleaning products, including sprays and wipes made by Lysol and Clorox. These cleaners may increase the risk of antibiotic resistance, Hartmann said. Plus -- although experts I spoke to disagreed on just how much to worry about this -- disinfectants such as bleach, ammonia and quats release fumes that can be harmful, said Pawel Misztal, a chemist who studies disinfectants at the University of Texas at Austin. So use disinfectants when you need to disinfect but not when you want to just clean.

When you have reason to worry about bad germs, kill them with a disinfectant. Some chemicals work better than others. Plain soap and water can kill germs when lathered but won't be as foolproof as stronger options if you're trying to eliminate microbes on surfaces, said Bill Wuest, a chemist at Emory University. Far more effective are disinfectants such as bleach, isopropyl (rubbing) alcohol, ethanol, hydrogen peroxide and quat-based cleaners.

If you're using a disinfectant that releases fumes, such as bleach or ammonia, ventilate the area first by opening doors or windows, or wear a disposable face mask and throw it away afterward, Misztal suggested. And I hate to tell you, but you're probably disinfecting all wrong. Many people spray or spread disinfectants on a surface and then immediately wipe the cleaner off with a paper towel or sponge, Wuest said, but this removes the chemical before it has had a chance to disinfect.

If you're using a store-bought product, the disinfection time should be on the label. Lysol disinfectant spray, for instance, needs to sit on a surface for three minutes. Recommendations for bleach solutions vary from one to 10 minutes. Alcohol-based solutions don't need to be wiped at all, since they eventually evaporate, said Cassandra Quave, an ethnobotanist at Emory University. And some botanical disinfectants may need to be left on for a long time, even 15 or 30 minutes, Hartmann said.

Wondering about other disinfectant options? Here's some more information:

• You can make disinfectants to save money. For a disinfecting bleach solution, mix one-third cup of household bleach with 1 gallon of water. (Bleach breaks down rapidly in water, so you'll need to make a new solution each day. And never mix bleach with chemicals other than water.)

• Sprays containing 70% ethanol or isopropyl alcohol and 30% water are also effective, Quave said. She emphasized that you should mix alcohol with water because otherwise it will evaporate before it has a chance to disinfect.

• You can make or buy plant-based disinfectants, some of which are less toxic and more environmentally friendly than conventional options. But note that botanical disinfectants may not work as quickly or thoroughly as bleach, quats or alcohol.

The bottom line: We germaphobes can still delight in killing germs but perhaps not all of them. When I need to clean a spill, I'll use soap and water or a gentle cleaning spray, not a disinfectant. But after handling raw meat, or when a family member is ill, I'll reach for the stronger stuff to clean contaminated surfaces, and I'll make sure to let it sit long enough to work, with the windows open. And while I wait, maybe I'll have the chance to tidy my house.

Print Headline: You may be cleaning all wrong