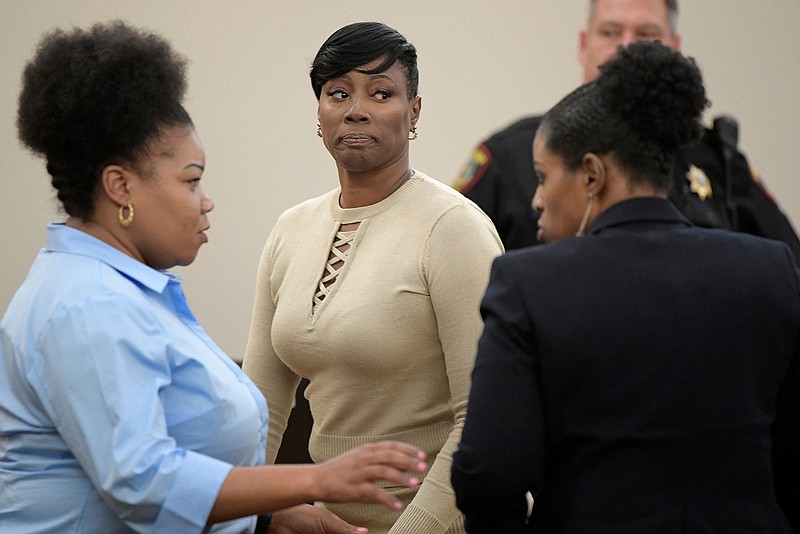 Crystal Mason, center, convicted of illegal voting and sentenced to five years in prison, at the Tim Curry Justice Center in Fort Worth, Texas, on May 25, 2018. (Max Faulkner/Fort Worth Star-Telegram/TNS)

FORT WORTH, Texas -- The Texas Court of Criminal Appeals is sending Crystal Mason's illegal voting case back to a lower court to review whether she knew it was a crime for her to vote while on supervised release.

Mason, of Rendon, was sentenced to five years in prison in 2018 after being convicted of illegal voting in Tarrant County. She submitted a provisional ballot that was ultimately not counted during the 2016 election while she was on federally supervised release in a tax fraud case. Mason has said she didn't know she wasn't allowed to vote, and in March 2018 she was convicted of illegally voting, a decision that was affirmed by the 2nd U.S. Court of Appeals.

Texas' highest criminal appellate court on Wednesday found that the court erred by "failing to require proof" that Mason had "actual knowledge that it was a crime for her to vote while on supervised release" and sent the case back to the 2nd U.S. Court of Appeals to evaluate the sufficiency of the evidence.

"I am pleased that the court acknowledged issues with my conviction, and am ready to defend myself against these cruel charges," Mason said in a statement. "My life has been upended for what was, at worst, an innocent misunderstanding of casting a provisional ballot that was never even counted. I have been called to this fight for voting rights and will continue to serve my community."

Her attorneys argued in a December brief that an election law passed last year supports the reversal of Mason's conviction. Senate Bill 1 states that "a person may not be convicted solely upon the fact that the person signed a provisional ballot affidavit ... unless corroborated by other evidence that the person knowingly committed the offense."

The Tarrant County district attorney's office argued in a subsequent court document that Mason ignores the term "solely" and the part of the law that allows for corroboration with other evidence. The office declined to comment because the case is pending.

The Court of Criminal Appeals on Wednesday wrote that it agrees with the state that changing the state law alone doesn't decriminalize Mason's conduct, but said it also agrees with Mason's attorneys that "actual knowledge of one's ineligibility is an element of the offense of illegal voting."

"What the Court of Appeals said, it agrees with what we've been saying all along, which is that to be convicted of illegal voting, an individual has to actually know that they were ineligible to vote," said Tommy Buser-Clancy, one of Mason's attorneys who works for the ACLU of Texas.

Mason's attorneys also argued that the lower court was wrong in using a interpretation of illegal voting law that is preempted by a federal voting law and by holding that Mason "voted" when the the provisional ballot wasn't counted. The court on Wednesday ruled against Mason on both arguments.

Mason has been out on bond as the case is appealed, her attorney said. She was sent to prison for 10 months in the federal case for violating her parole in connection with the state illegal voting case that's being appealed.