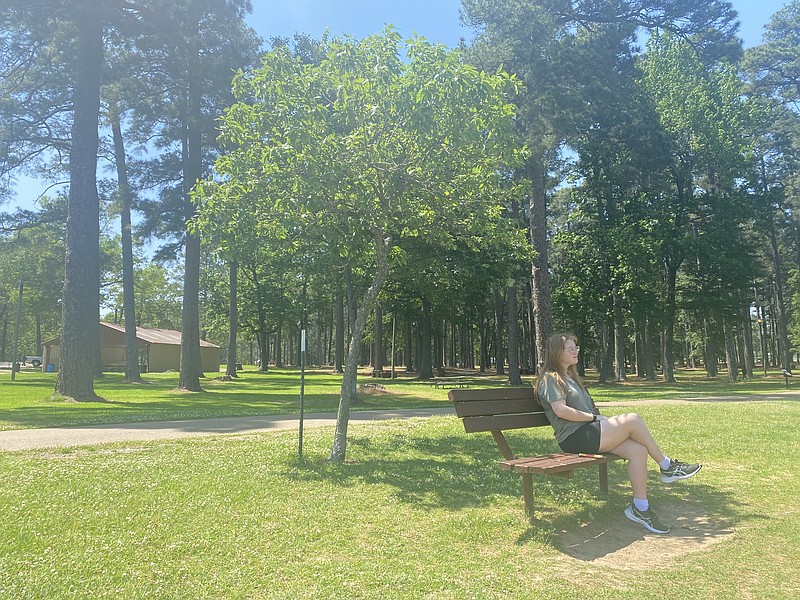 A small tree provides a bit of shade from the sun for Cadyn Cox on a warm afternoon Wednesday, May 11, 2022, at Spring Lake Park in Texarkana, Texas. (Staff photo by Andrew Bell)

TEXARKANA -- With the recent rise in temperatures, local medical officials are seeing an increase in heat-related illnesses.

"Our concern is that even those who work out in the heat have not yet acclimated to this sudden increase. So we've really got to be aware that a serious illness can occur secondary to heat-related illnesses," he said. "Prevention is the key and the cure."

Over the past two weeks, temperatures in Texarkana region have shot up from the 70s to the low 90s, with heat indexes of over 100 degrees in some instances. Texarkana's high Monday was 92 degrees -- the hottest temperature on May 9 since 1899.

Heat cramps occur when the body has a lack of fluids and electrolytes while a person is in hot conditions. This can progress to heat exhaustion, which includes symptoms like nausea, weakness, dizziness and fatigue.

"At that point, you definitely need to get out of the heat, get to a cool spot and even remove the clothes that you have sweat in to replace with cooler clothes," Young said. "Get a fan on yourself with some cool mist to help evaporate some of that heat, and rehydrate with water or some type of sports drink that has minimal sugar in it.

"If that does not help, seek help with a health provider or go to the emergency center."

A heat stroke is the most serious heat-related illness. It occurs when body temperature rises rapidly, the sweating mechanism fails and the body is unable to cool itself.

"A heat stroke is a heat-related illness that affects the neurological component of a patient," Young said. "It can be life-threatening and deadly. If that occurs, you definitely need to call 911. But before 911 gets there, try to remove the person from the heat, cool them down and get in some liquids if they're conscious."

Young said it's not uncommon for his hospital to see heat-related illnesses almost every day when the temperature changes as drastically.

"Fortunately, the majority of the time what we see is heat cramps or heat exhaustion. But again, that can very quickly lead into a heat stroke, which can be deadly," he said. "Even if you're a seasoned professional who works out in the heat, this can sneak up on you quickly and be devastating."

Young also mentioned the potential danger of leaving children and pets in overheated cars, which can be 20 to 40 degrees hotter than it is outside without air conditioning.

"That can be deadly in a matter of minutes. It's almost like a microwave with the engine turned off, so it's very important not to do that during the summer."

Highs are expected to remain in the low 90s with higher heat indexes throughout the week.