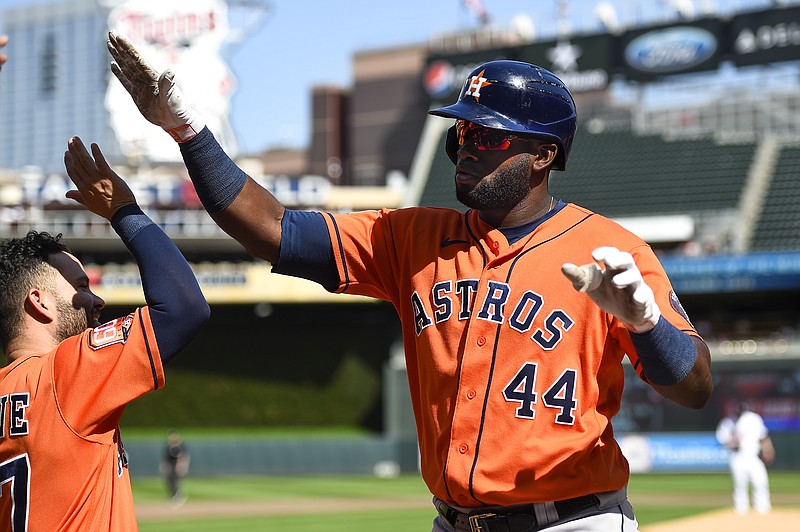 MINNEAPOLIS -- Luis Garcia and three relievers combined on a seven-hitter, Yordan Álvarez homered twice and Jeremy Peña capped a big day with three hits as the Houston Astros extended their winning streak to 10 games with a 5-0 victory over the Minnesota Twins on Thursday.

Houston completed a three-game sweep. Before the regularly scheduled game, the teams completed a game suspended after three innings on Wednesday night due to severe weather. Jose Altuve homered, doubled and drove in three runs in an 11-3 victory.

The Astros have given up just 11 runs during the streak with five shutouts and a 0.90 ERA over that stretch.

"Usually when you have a winning streak you're either hitting the ball a ton or pitching a ton, or both usually," Astros manager Dusty Baker said. "I can't take anything away from our pitchers. They're pitching great."

Peña had two hits and drove in three runs in the first game, giving the Astros shortstop 20 RBIs, most among rookies. He left the second game in the fourth inning with what appeared to be a minor knee injury.

"It's good. Just a little discomfort," Peña said. "I feel like we just took cautionary steps to see what's up. Nothing serious."

Álvarez drove a pitch from Josh Winder (2-1) over the wall in center field to give the Astros a 3-0 lead in the third inning. His second homer of the day and 10th this season came in the ninth off Cole Sands.

"We hope he's getting hot like only he can," Baker said of Àlvarez, who had his second multi-homer game this season.

"We always have to find ways to win," said Twins manager Rocco Baldelli, who was back in the dugout on Thursday after missing a week due to COVID-19. "It doesn't matter if we're playing one of the best teams in baseball, as we were this week. I think we can look all around at the games that we just played and can say we need to pitch better and we need to swing the bats a little bit better."

The Astros led 5-1 after three innings on Wednesday night when the game was suspended due to heavy rain and lightning. Kyle Tucker homered for the Astros. Bryan Abreu (2-0) earned the victory in relief of José Urquidy, who gave up one run over three innings before the game was suspended. Abreu allowed one run and struck out four in two innings pitched.

When play restarted, the Twins closed to 5-2 on a sacrifice fly by Mark Contreras, who was making his major league debut.

But Houston quickly blew it open with a six-run sixth. The barrage started with Tucker's solo homer, a high fly to right field. After Peña struck out, the next six batters reached base. Jose Siri and Martin Maldonado singled off Yennier Cano, who had come on in the fourth in relief of Archer.

Cano was replaced by Cody Stashak, who gave up consecutive doubles to Altuve, Michael Brantley and Alex Bregman. Álvarez singled and Tucker capped the burst with an RBI single.

Twins utilityman Nick Gordon, son of former major league pitcher Tom Gordon, made his first major league appearance on the mound in the ninth inning. He gave up a single to Peña, but retired Tucker on a popup and Siri and Maldonado on infield grounders.

"I've seen Nick pitch before, in high school," Baldelli said. "That's not a weird world for him. He knows what he's doing."

In the second game, Gordon started in center field, had two hits, and made a diving catch on the warning track that saved two runs. But afterwards, pitching was on his mind -- specifically, having a better outing than his brother, Dee Strange-Gordon of the Washington Nationals, had when he pitched for the first time in the majors on April 12. Strange-Gordon have up a home run to Atlanta's Ozzie Albies, walked three batters and hit another.

"I can't give up a long ball right here," Gordon said of his mindset on Thursday. "I've seen my brother do it. That hurt us as a family a little bit, so we had to bounce back."

"I always view a less-than-stellar outing as a great opportunity to learn and refocus and fine-tune some things and clean some stuff up. It's always good feedback when guys are on you. You know you've got to adapt and change and adjust. That's what this game is all about, adjusting to the hitters in the box." -- Winder, who had gone six innings and given up zero earned runs in his first two major league starts before getting knocked around by the Astros. He allowed three earned runs, six hits and three walks in 3 1/3 innings.

Astros: Peña is day to day with right knee discomfort. Baker said he didn't expect Peña to play in Friday's game at Washington.

Twins: INF Luis Arraez was activated from the COVID-19 IL before the start of Thursday's scheduled game.

Astros: LHP Framber Valdez (1-2, 3.34 ERA) will start Friday's opener of a three-game series at Washington. Valdez hasn't notched a win since April 7, but he's pitched at least six innings in each of his last three starts, allowing a total of five earned runs in 18 1/3 innings.

Twins: Minnesota will send RHP Sonny Gray (0-1, 3.48) to the mound Friday as the Twins host the Cleveland Guardians. Gray struck out seven in four scoreless innings against Oakland in his latest start. 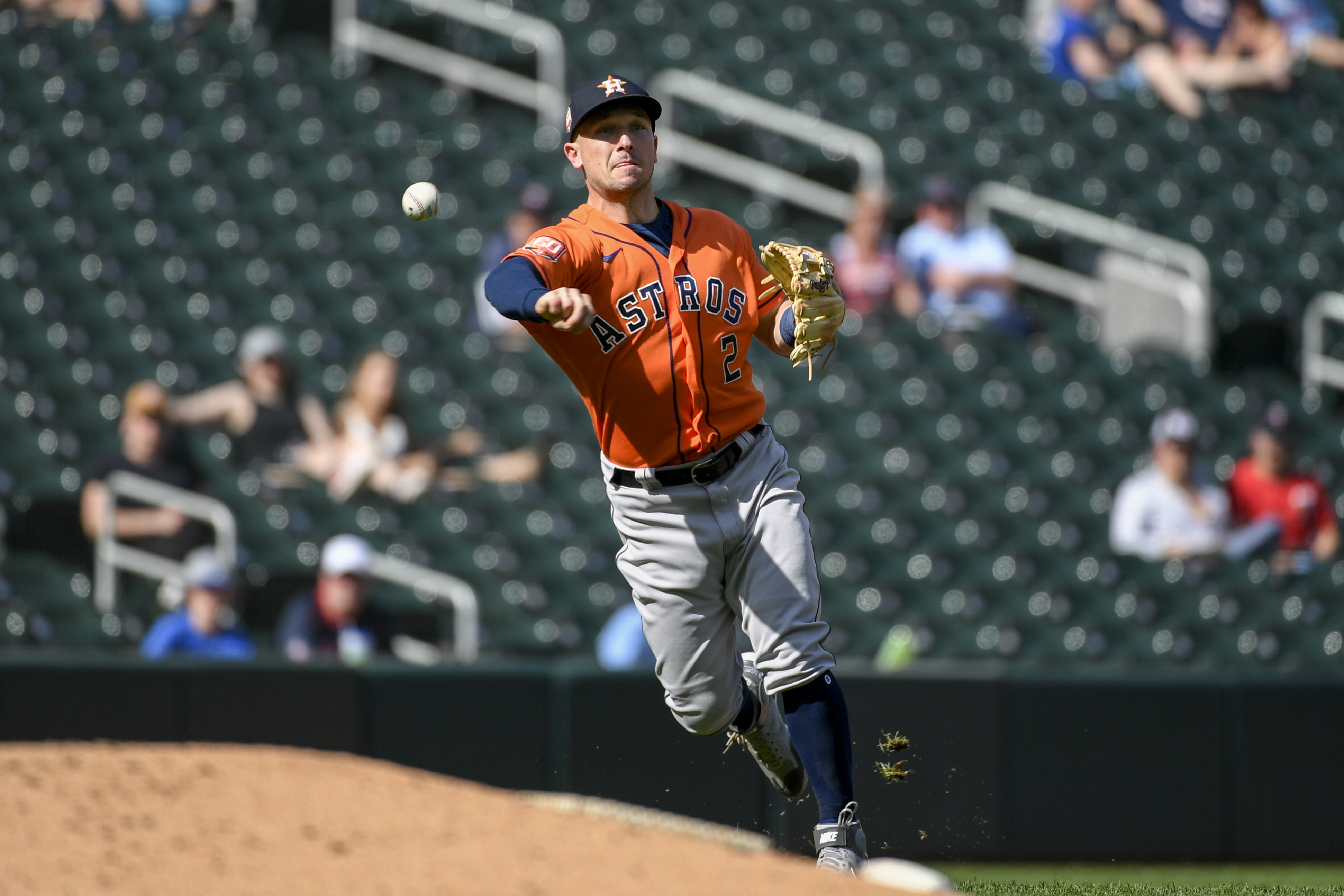 Houston Astros third baseman Alex Bregman throws to get Minnesota Twins Max Kepler out at first during the third inning of a baseball game, Thursday, May 12, 2022, in Minneapolis. (AP Photo/Craig Lassig) 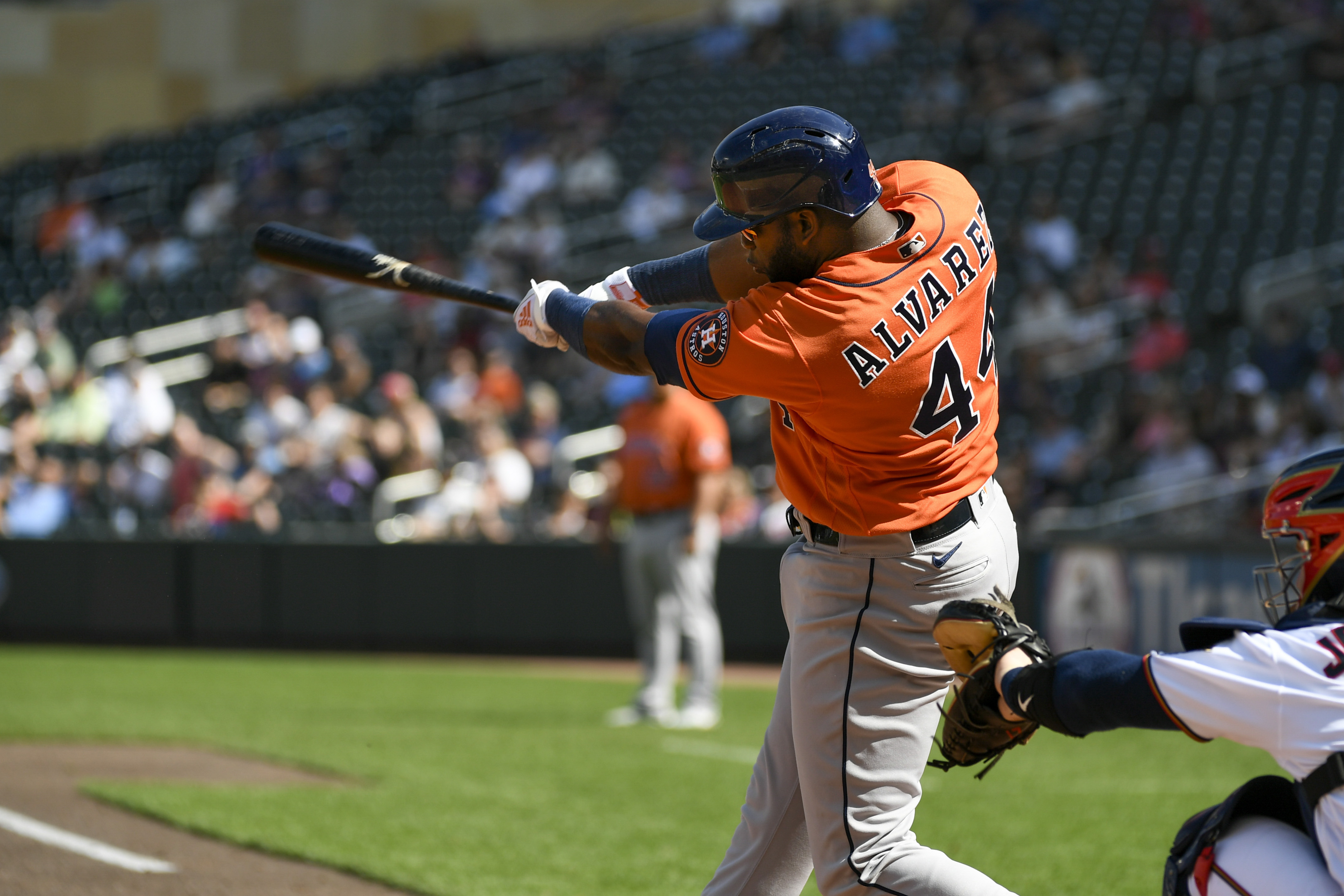 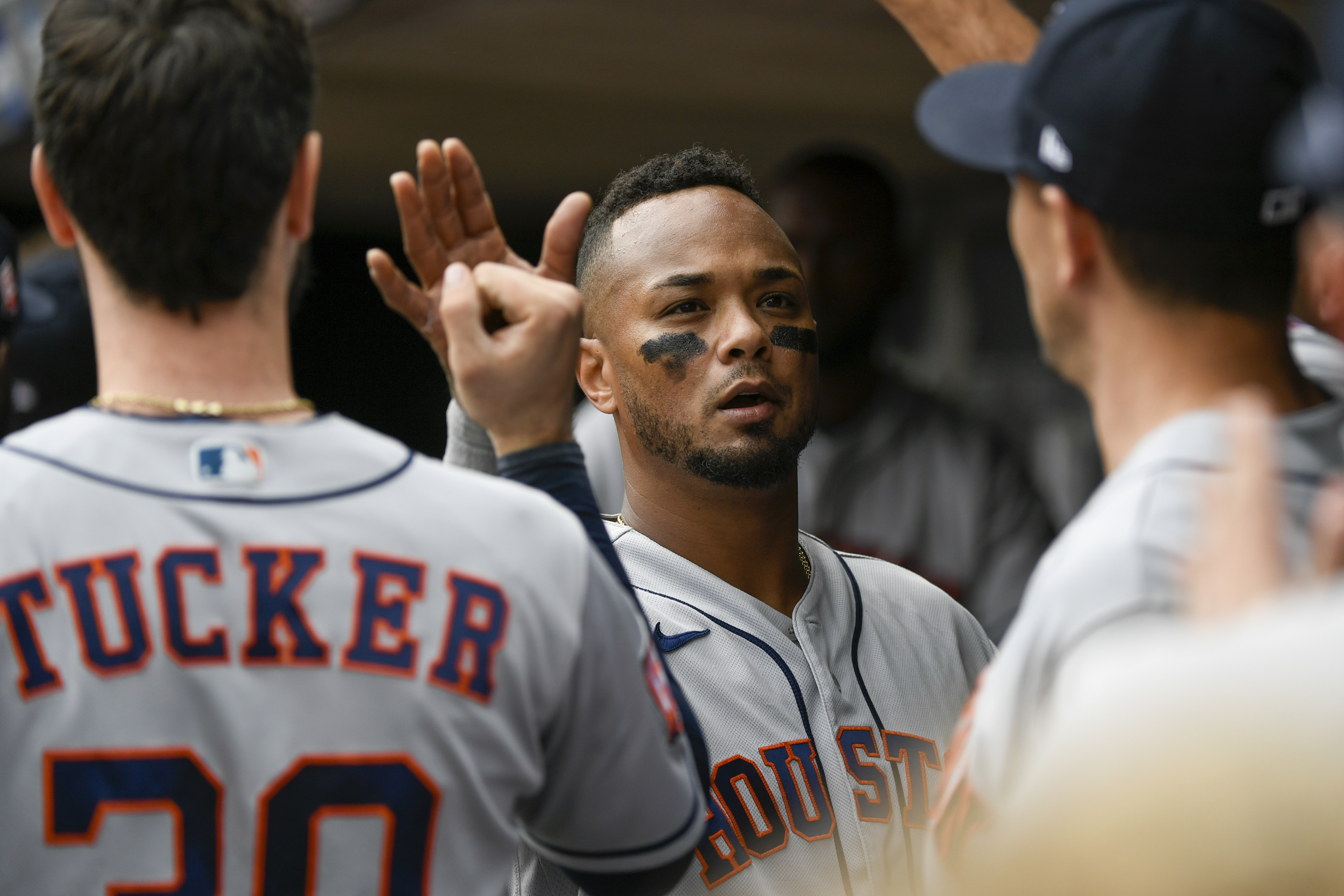 Houston Astros' Jose Siri celebrates with teammates after scoring on a double hit by Jose Altuve during the sixth inning of a baseball game that was suspended after three innings Wednesday due to severe weather, Thursday, May 12, 2022, in Minneapolis. (AP Photo/Craig Lassig) 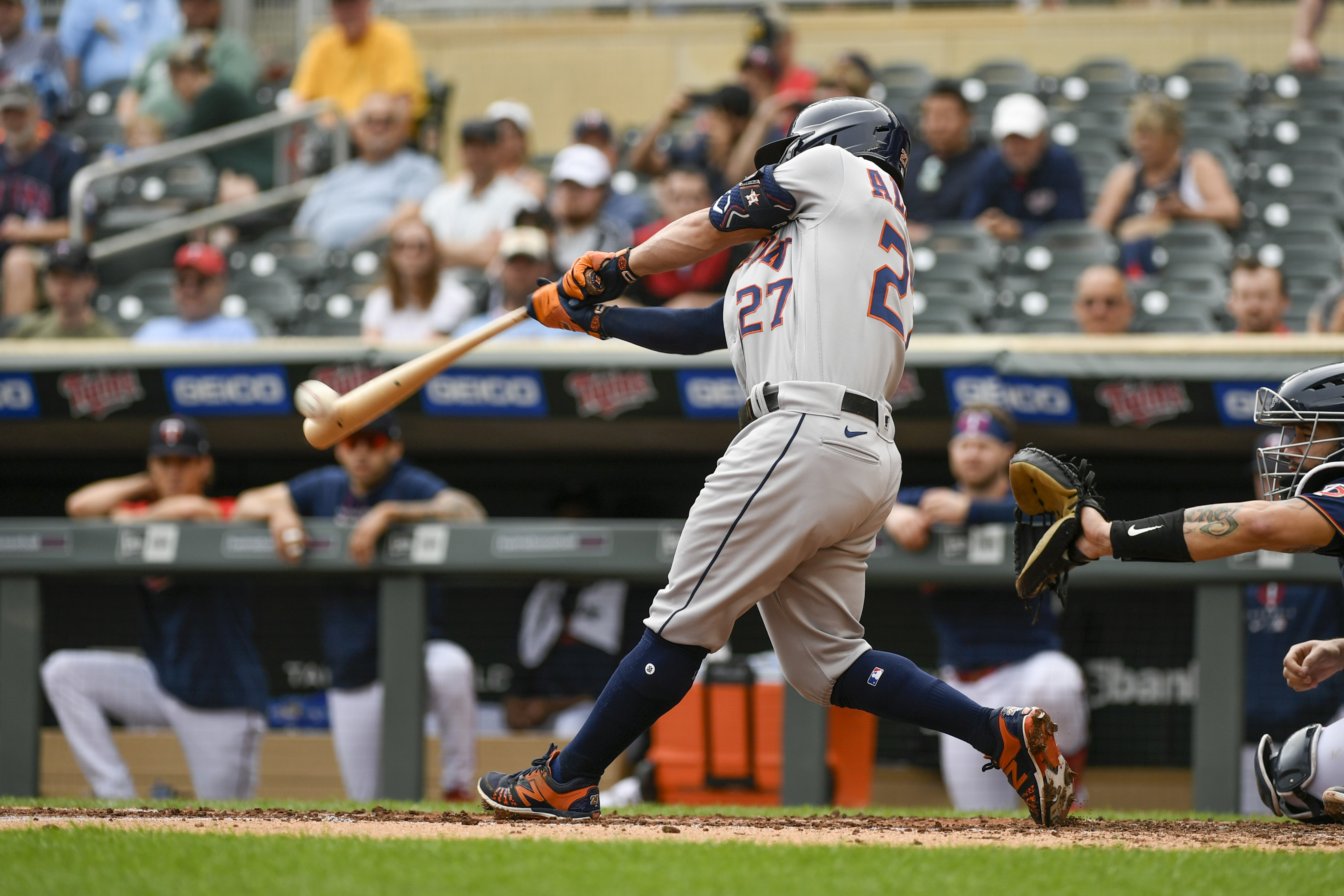 Houston Astros' Jose Altuve hits a double, driving in two runs against Minnesota Twins pitcher Cody Stashak during the sixth inning of a baseball game that was suspended after three innings Wednesday due to severe weather, Thursday, May 12, 2022, in Minneapolis. (AP Photo/Craig Lassig) 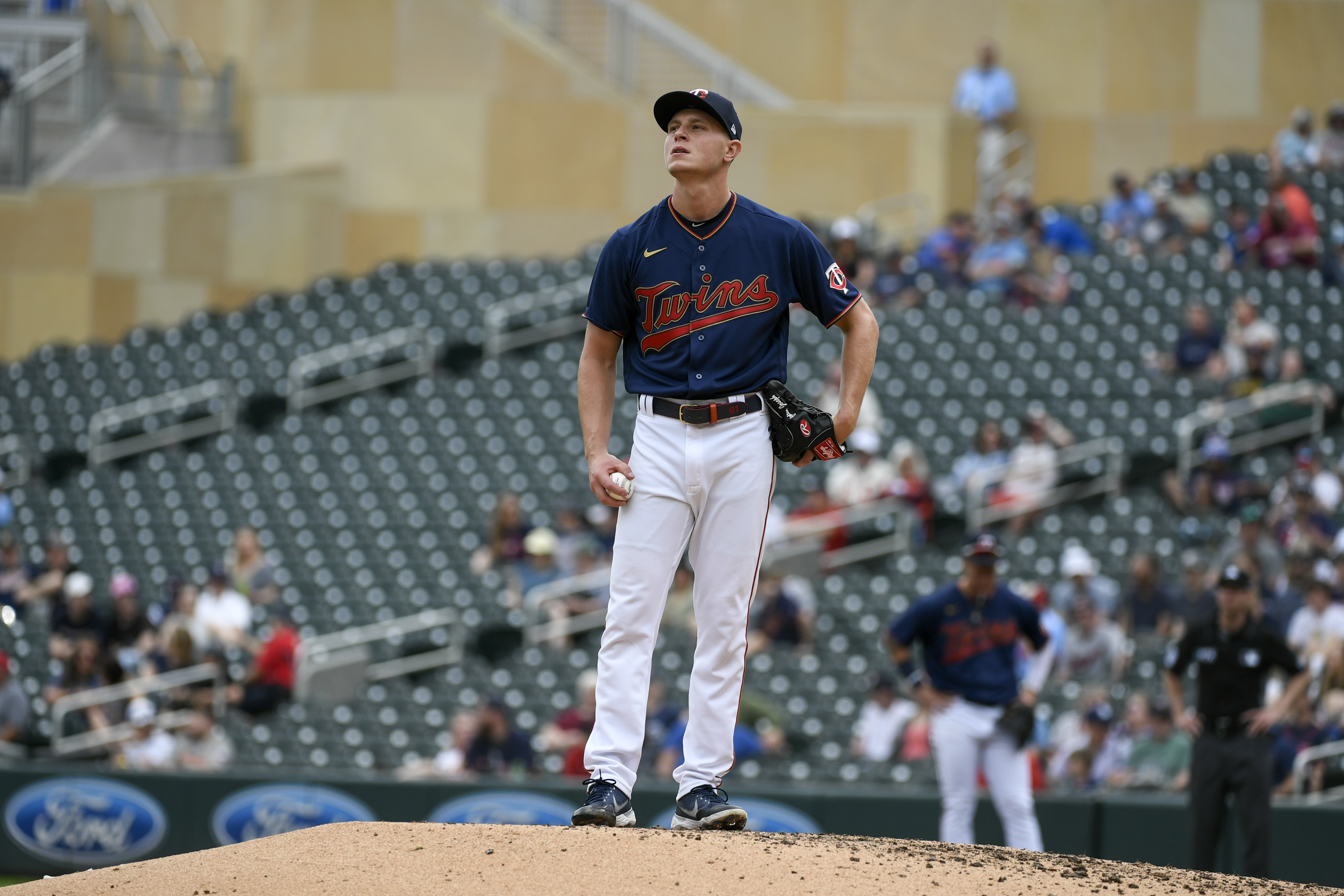 Minnesota Twins pitcher Cody Stashak takes a moment after the Houston Astros scored their fifth run during the sixth inning of a baseball game that was suspended after three innings Wednesday due to severe weather, Thursday, May 12, 2022, in Minneapolis. (AP Photo/Craig Lassig) 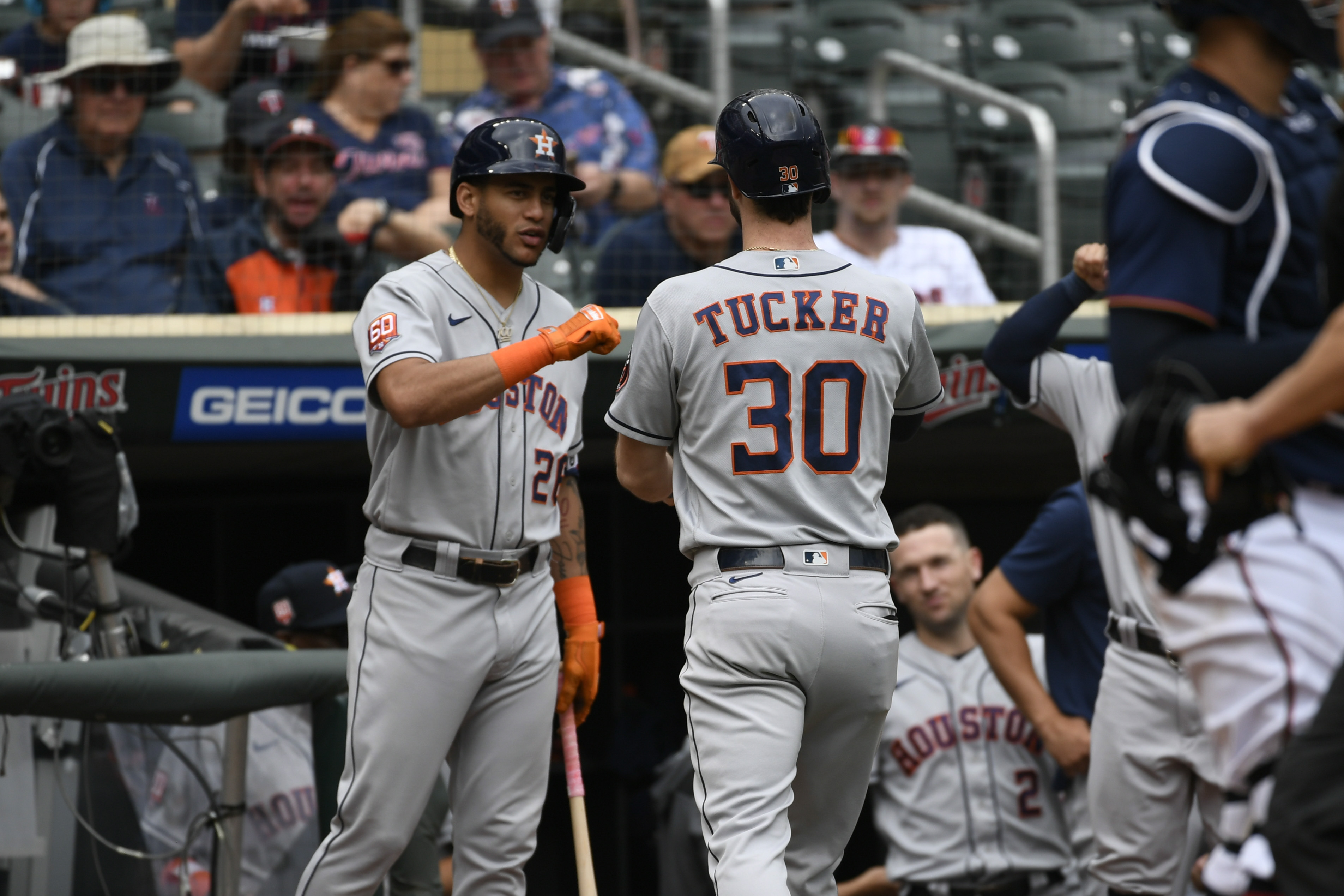 Houston Astros right fielder Kyle Tucker (30) celebrates with Jose Siri (26) after Tucker hit a solo home run against Minnesota Twins pitcher Yennier Cano during the sixth inning of a baseball game that was suspended after three innings Wednesday due to severe weather, Thursday, May 12, 2022, in Minneapolis. (AP Photo/Craig Lassig) 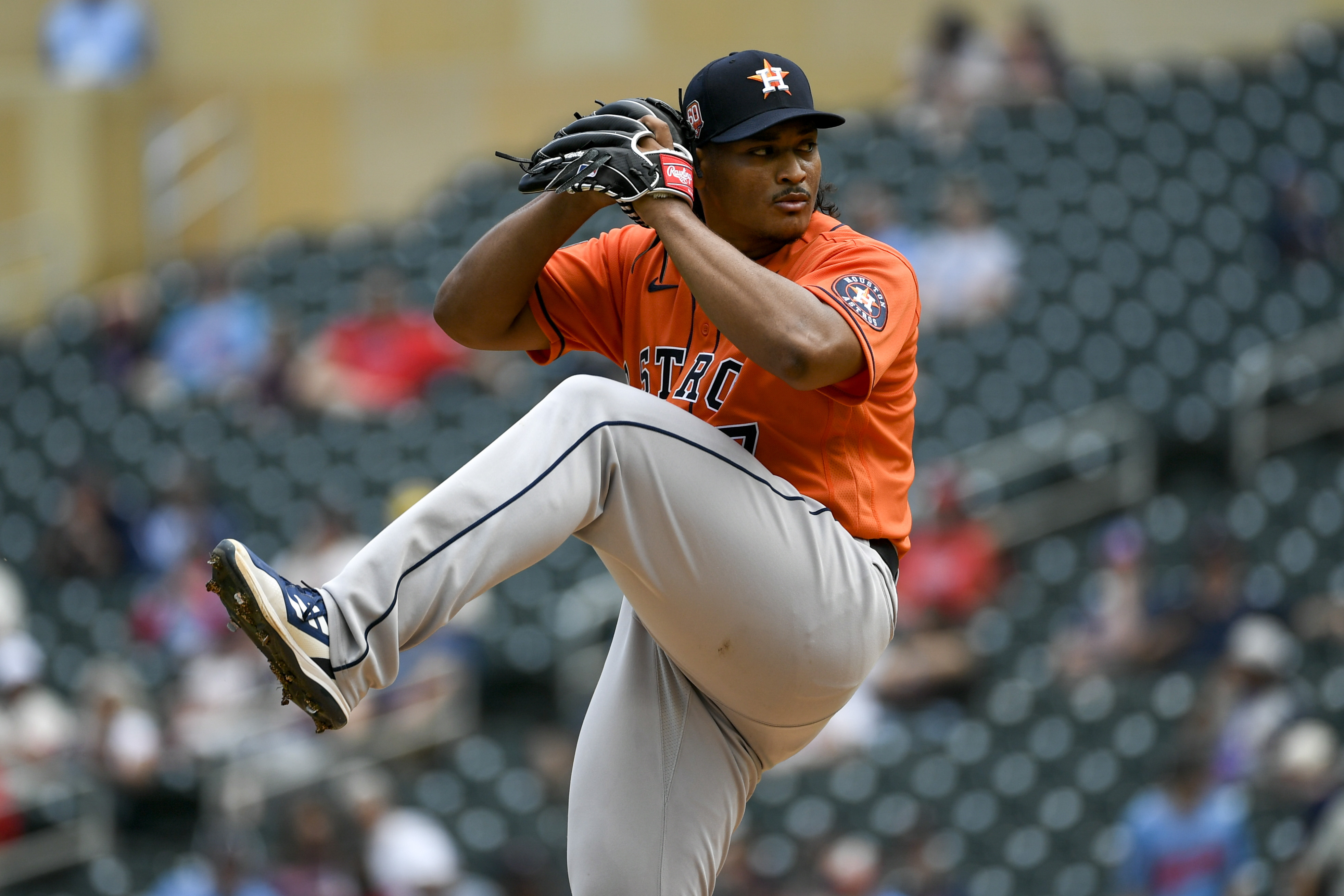 Houston Astros pitcher Luis Garcia throws against the Minnesota Twins during the first inning of a baseball game, Thursday, May 12, 2022, in Minneapolis. (AP Photo/Craig Lassig)