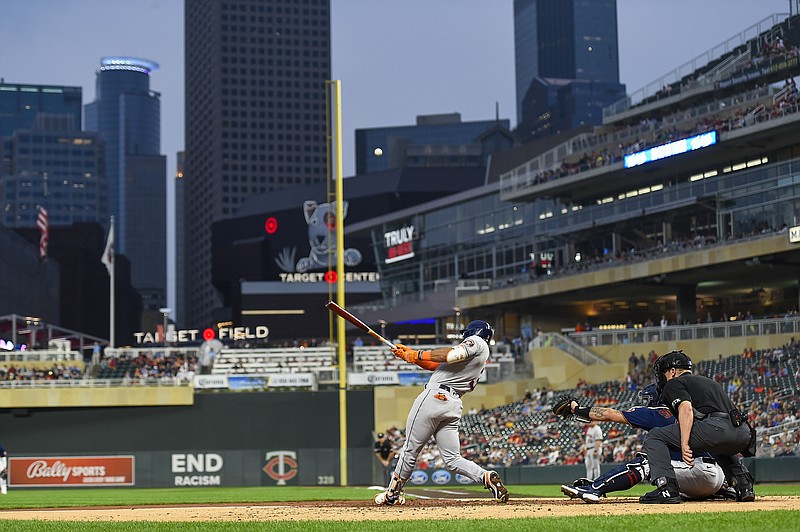 MINNEAPOLIS -- Houston and Minnesota had their game suspended Wednesday night when a severe thunderstorm rolled through and halted play in the top of the fourth inning, with the Astros leading the Twins 5-1 on Jeremy Peña's three RBIs and Jose Altuve's home run.

The teams will pick up Thursday afternoon where they left off and play the last six innings, before staging the series finale at Target Field about a half-hour after the first game concludes. Both clubs will be allowed to roster an extra 27th player for the second game.

José Urquidy won't get to keep working on what he started, but he gave the Astros -- who have an eight-game winning streak going -- a boost with three solid innings on the mound.

The right-hander gave up a double to Max Kepler and an RBI single to Jorge Polanco to fall behind in the first inning, but the Astros roared back against Twins starter Chris Archer with two runs in the second and three in the third.

Archer needed 75 pitches to get through three innings. One of the runs in the second was unearned, thanks to a passed ball by catcher Gary Sánchez that moved up runners at first and second.

With Yennier Cano warming up to start the fourth in place of Archer, lightning began to flash more frequently as the rain fell harder from the darkened twilight sky. As soon as the grounds crew raced onto the field to arrange the tarp, fans fled for the overhangs and concourses to stay dry before soon being asked to take shelter amid high winds.

In the bottom of the third, Sanchez had at least a double stolen from him with a leaping catch at the wall by left fielder Yordan Alvarez to save a run and end that inning. Thunder rumbled right after the grab, as if on cue, and Urquidy put his hand on his head in smiling disbelief about the defensive assist from Alvarez.

Archer was 5-2 with a 2.15 ERA in eight previous career starts against the Astros, though the last one came in 2017 with Tampa Bay.

The Astros broke Minnesota's nine-game home winning streak with a 5-0 victory on Monday night, when Justin Verlander took a no-hitter one out into the eighth inning.

Twins center fielder Byron Buxton returned to the lineup after being held out of the last two games as a precaution with a mild hip strain. He struck out and popped out against Urquidy.

Cano, a 28-year-old native of Cuba, was set to make his major league debut in relief of Archer to start the fourth.

He was called up from Triple-A St. Paul to replace Danny Coulombe, who went on the 15-day injured list with a hip impingement. Coulombe has allowed only one earned run in 12 innings this season. His injury left the Twins with just one left-hander on the 13-man staff, reliever Caleb Thielbar.

Twins manager Rocco Baldelli, infielder Luis Arraez and starting pitcher Dylan Bundy remained out with COVID-19, though their recoveries were trending in the right direction, according to bench coach Jayce Tingler.

Astros: RHP Luis Garcia (2-1, 3.45 ERA) will start the second game Thursday, staying on schedule. The bullpen will piece together the remainder of the suspended game.

Twins: RHP Josh Winder (2-0, 1.61 ERA) was slated to pitch the series finale, aiming for his third win in three major league starts. The rookie has 15 strikeouts, most in a pitcher's first two starts in Twins history. In 12 innings over his first two turns, Winder allowed no earned runs and just five hits with one walk. 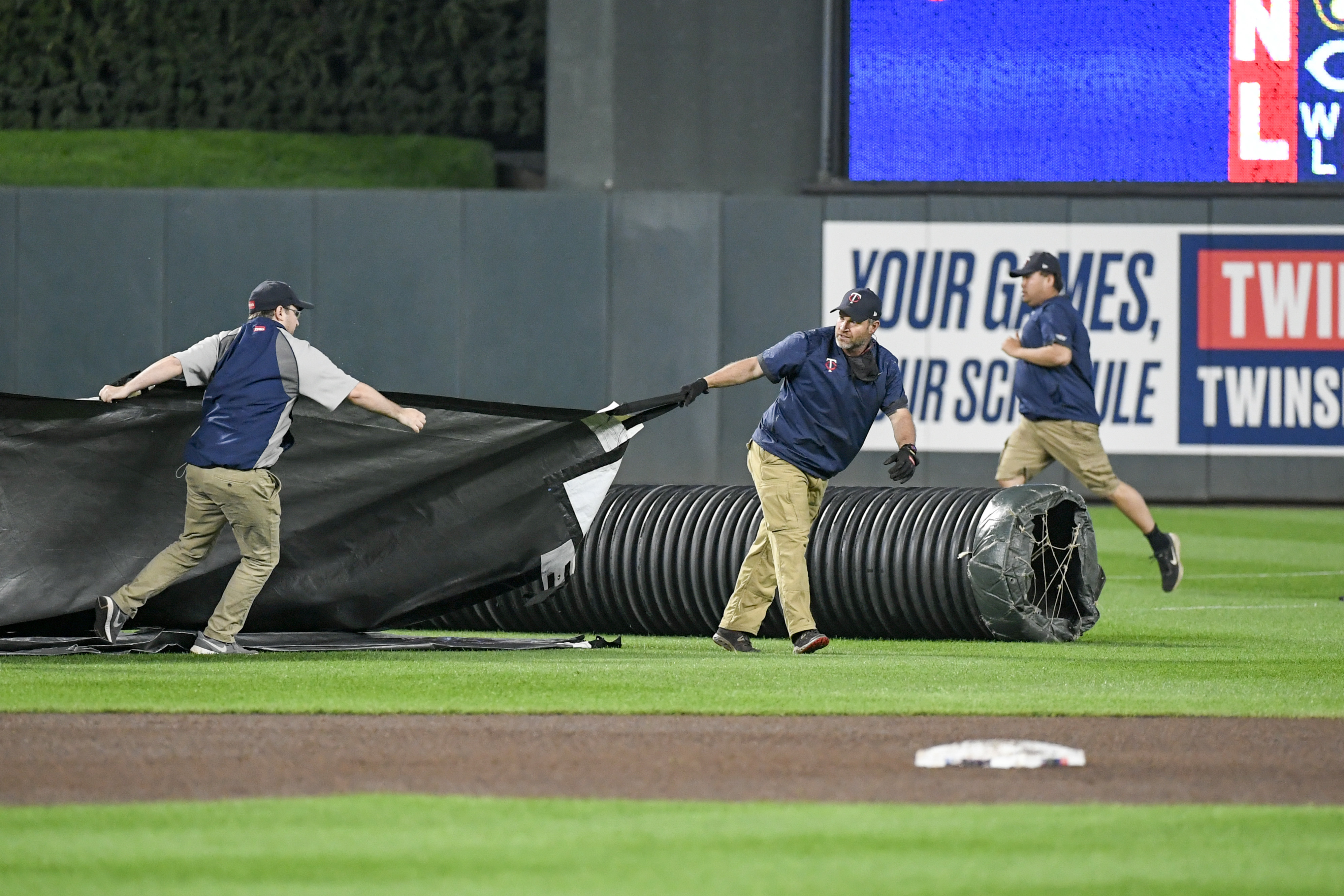 Members of the ground crew quickly pull out the tarp as the game between the Minnesota Twins and Houston Astros is delayed because of thunderstorms and tornado warnings during the third inning of a baseball game, Wednesday, May 11, 2022, in Minneapolis. (AP Photo/Craig Lassig) 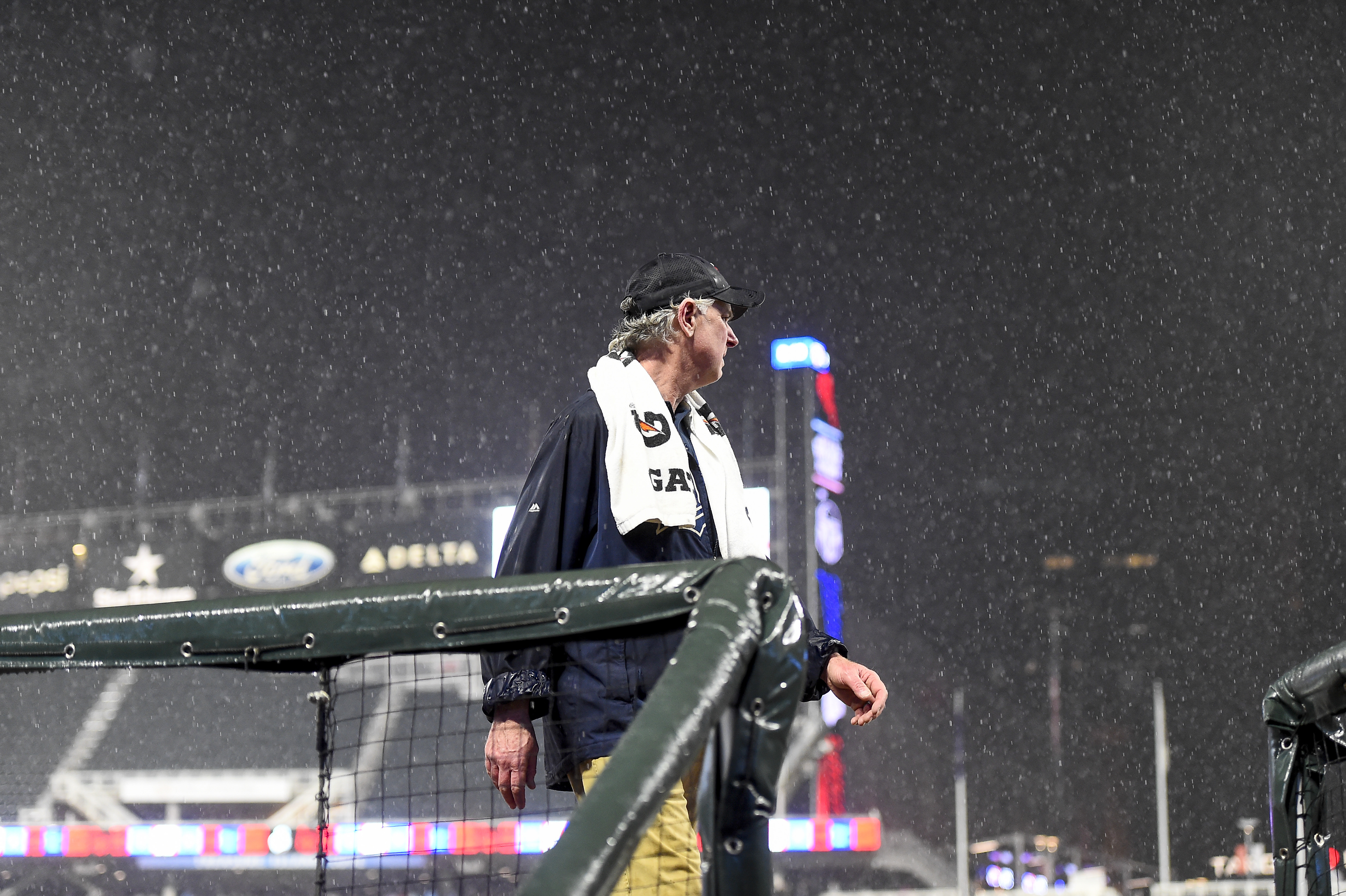 Larry Divito, head grounds keeper for the Minnesota Twins, looks over the field during a rain delay that interrupted their game against the Houston Astros after the third inning of a baseball game, Wednesday, May 11, 2022, in Minneapolis. (AP Photo/Craig Lassig) 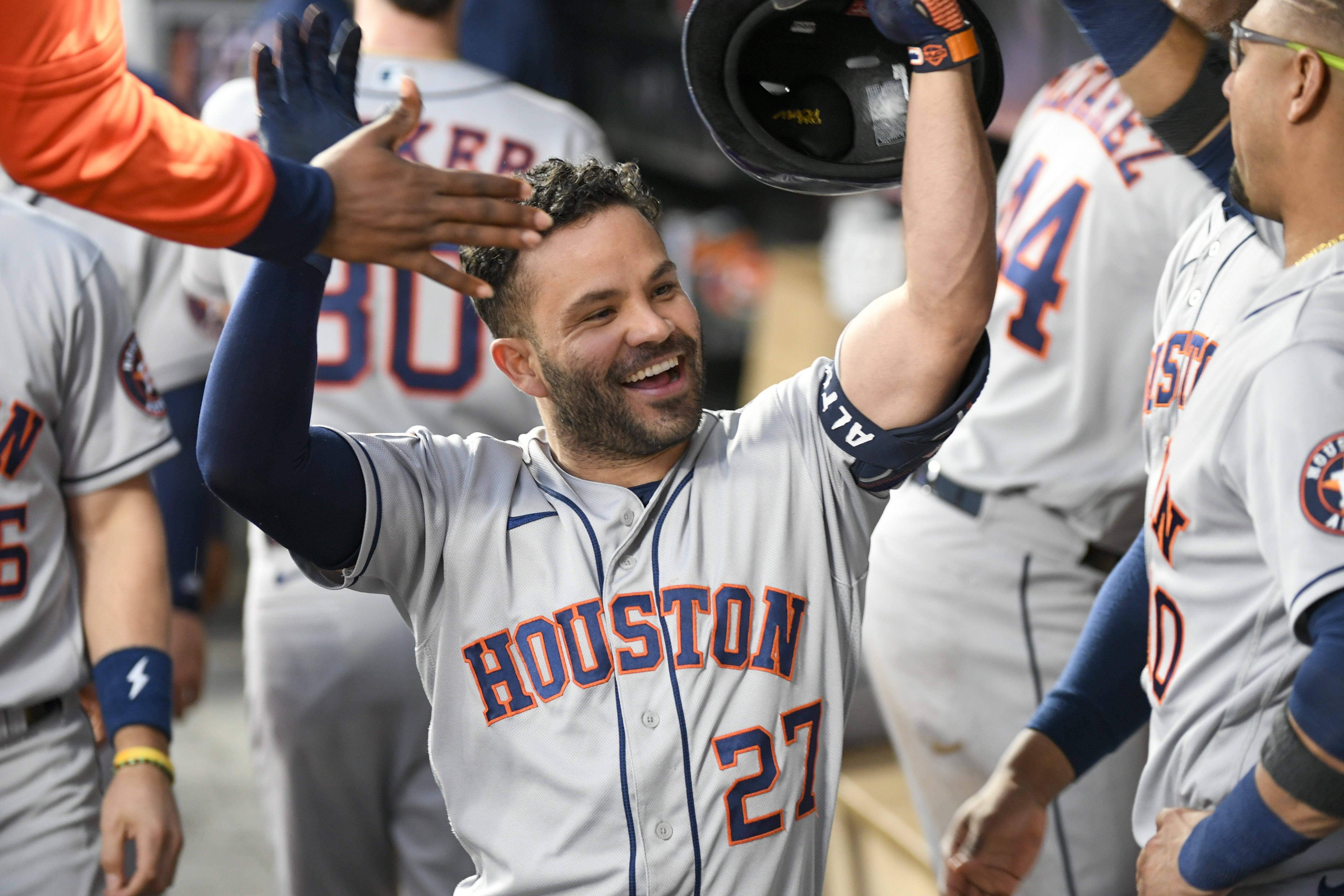 Houston Astros' Jose Altuve celebrates with his teammates after hitting a solo home run against Minnesota Twins pitcher Chris Archer during the third inning of a baseball game, Wednesday, May 11, 2022, in Minneapolis. (AP Photo/Craig Lassig) 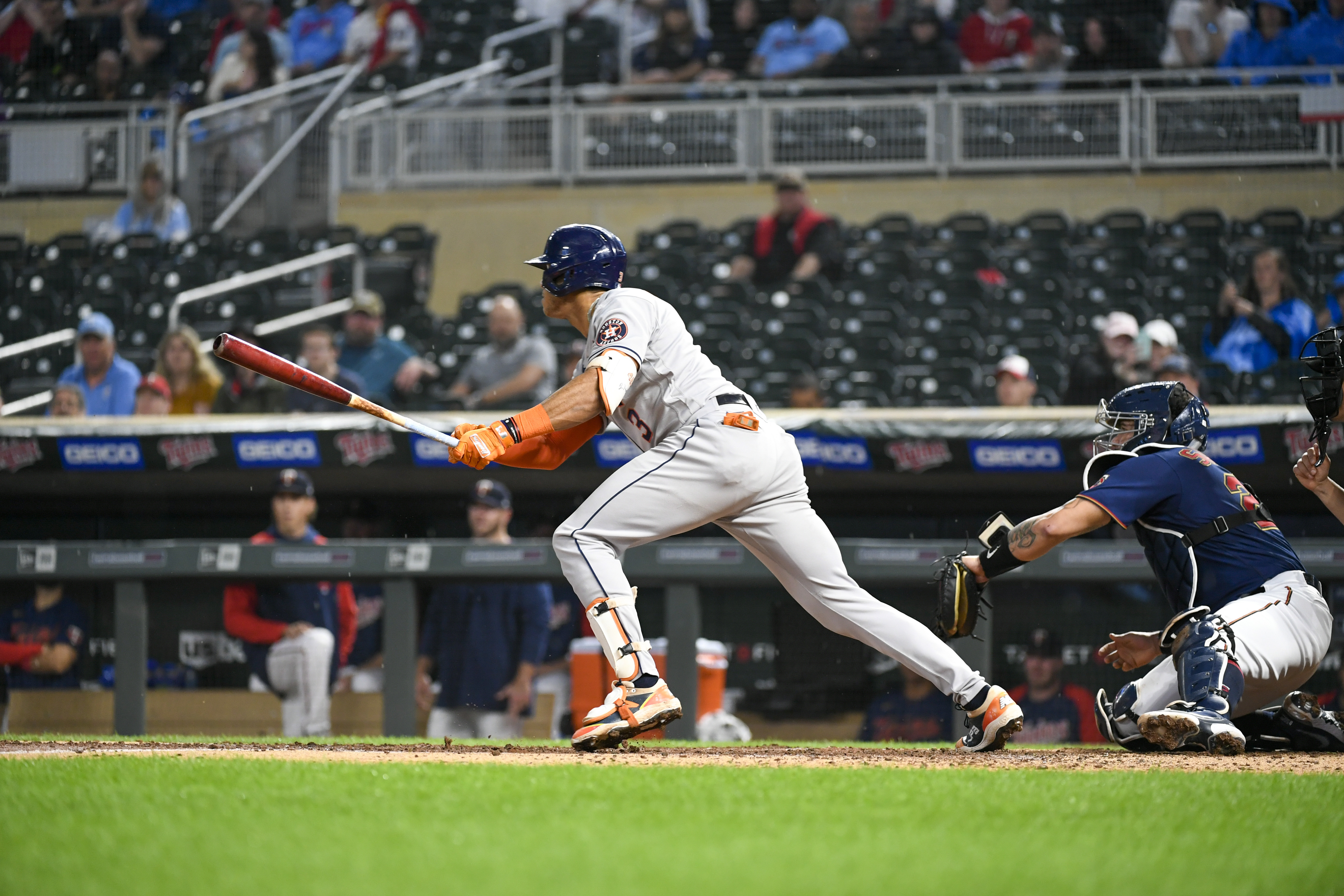 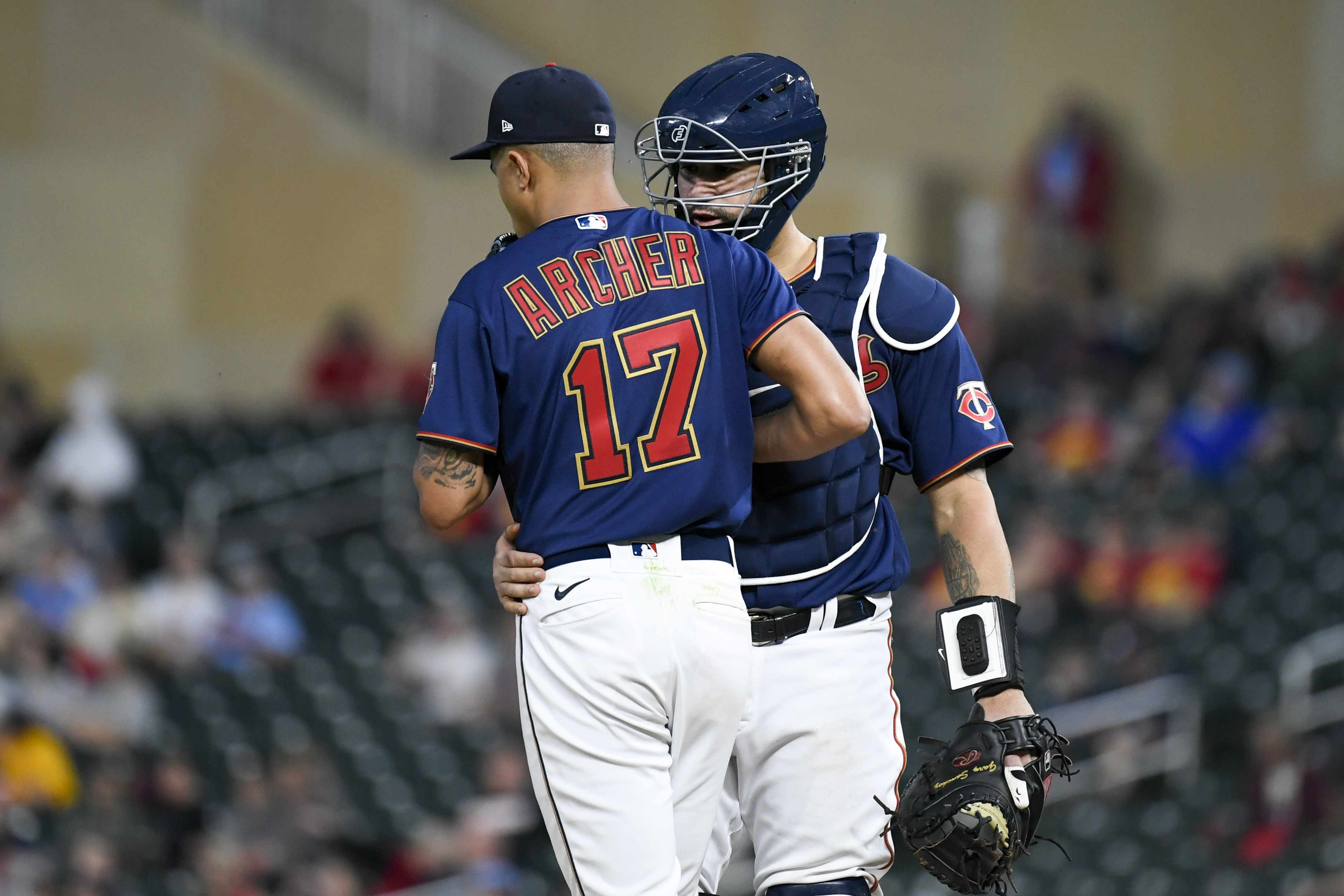 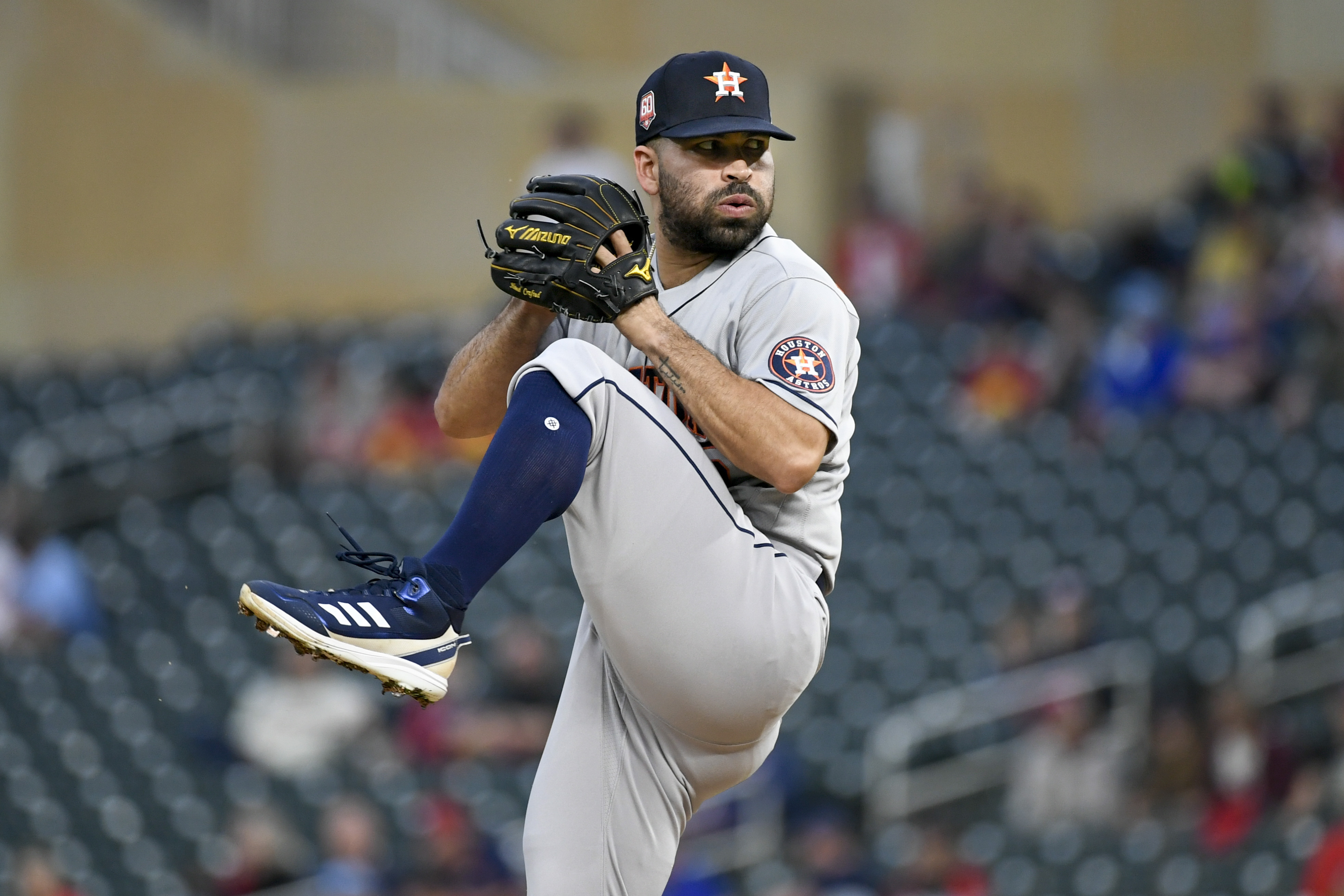 Houston Astros pitcher Jose Urquidy throws against the Minnesota Twins during the first inning of a baseball game, Wednesday, May 11, 2022, in Minneapolis. (AP Photo/Craig Lassig) 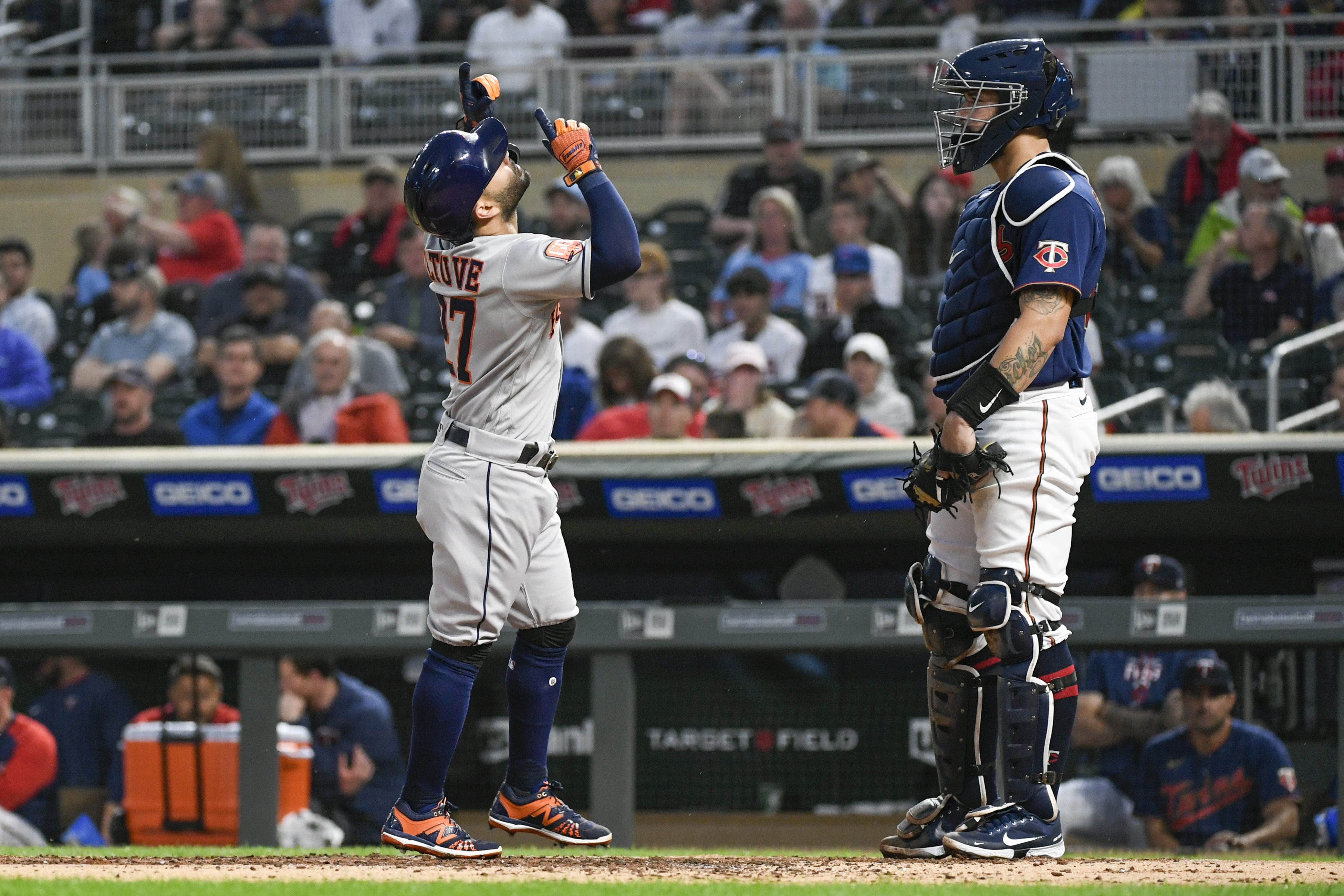 Houston Astros' Jose Altuve, left, looks up as he crosses home plate after hitting a solo home run as Minnesota Twins catcher Gary Sanchez looks on during the third inning of a baseball game, Wednesday, May 11, 2022, in Minneapolis. (AP Photo/Craig Lassig)