Bucks, Warriors try to close out second-round series at home 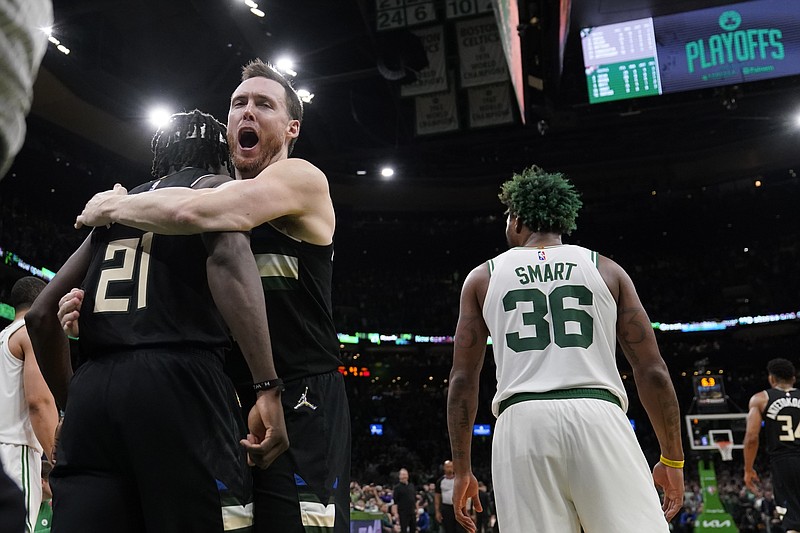 Milwaukee Bucks guard Jrue Holiday (21) is embraced by Pat Connaughton while celebrating after blocking a shot by Boston Celtics guard Marcus Smart (36) in the final seconds of play during the second half of Game 5 of an Eastern Conference semifinal in the NBA basketball playoffs, Wednesday, May 11, 2022, in Boston. The Bucks won 110-107. (AP Photo/Charles Krupa)

MILWAUKEE -- The Milwaukee Bucks want to build off the momentum from a thrilling comeback. The Golden State Warriors seek to put an embarrassing loss behind them as both teams attempt to end their second-round series.

Both have 3-2 leads and are at home Friday night for Game 6. The defending NBA champion Bucks rallied from a 14-point, fourth-quarter deficit to win 110-107 in Boston on Wednesday night while the Warriors squandered an opportunity to close out their series by losing 134-95 at Memphis.

"At the end of the day, we can't get too high from this," Bucks forward Giannis Antetokounmpo said after the Buck' Game 5 victory. "Obviously, it's great to win the game, great to go back home and feel good ourselves, but the job is not done."

Although Milwaukee is savoring an emotional win and Golden State is coming off a blowout loss, the trends of these series indicate the Warriors should feel more comfortable going home.

The home-court advantage hasn't meant much in the Bucks-Celtics series. The road team has won three of the five games, including each of the last two.

History suggests the lopsided nature of Golden State's Game 5 loss shouldn't have a carryover effect. The Warriors are the sixth team in the past 10 years to lose by at least 39 points in a playoff game that didn't end a series. Four of the previous five losing teams won their next game.

"Well, it doesn't feel good losing by as much as we did," Warriors guard Klay Thompson said. "At the end of the day it is just a loss and you flush it from your mental and you remind yourselves who you are. You go in and play with 100% effort on Friday, and I like our chances."

The Grizzlies also have reason to feel confident, even with Ja Morant likely out for the rest of the postseason with a bone bruise in his right knee. The Grizzlies have gone 1-1 against the Warriors since Morant's injury and are 21-6 in games their All-Star guard has missed this season.

In the Celtics-Bucks series, the teams have alternated victories through the first five games. The Celtics' season depends on that pattern continuing Friday.

The series has been full of comebacks already. The Celtics want to close it out by rallying from a 3-2 deficit and winning a potential Game 7 in Boston on Sunday.

"We had a golden opportunity," Celtics coach Ime Udoka said after the Game 5 loss. "That's the story here. It's going to be tougher now. Got to go get two in a row. But what we've done throughout this series and throughout this season is bounce back when we've been tested."

-- NEED TO KNOW: The Bucks took the series lead with a Game 5 comeback as Bobby Portis scored the go-ahead basket on a putback of a missed Antetokounmpo free throw with 15 seconds left. Jrue Holiday sealed the victory by getting a block and a steal in the last 10 seconds. Antetokounmpo had 40 points. The team that has led entering the fourth quarter has lost the last three games of this series.

-- KEEP AN EYE ON: Rebounding. Over the past two games, the Bucks have outrebounded the Celtics 97-74 and own a 32-18 advantage in second-chance points.

-- PRESSURE IS ON: Celtics F Jayson Tatum. The three-time All-Star has been productive, scoring 34 points in Game 5 and 30 in Game 4. But he's just 5 of 27 from 3-point range over his last three games after going 9 of 19 from beyond the arc in the first two games of this series. Tatum will need to regain his 3-point accuracy for the Celtics to win this series.

-- NEED TO KNOW: Golden State committed 22 turnovers that led to 29 Grizzlies points in Memphis' Game 5 blowout victory. Every starter for the Warriors had a negative plus-minus rating. Thompson's minus-45 rating tied the worst plus-minus in any playoff game over the past 25 years with Andre Drummond's minus-45 against Milwaukee in 2019.

-- KEEP AN EYE ON: Memphis used its size advantage with 6-foot-11 Steven Adams leading the way to outrebound the Warriors for the first time in this series with a 55-37 edge on the boards. The Grizzlies had an 18-4 difference on the offensive boards, leading to a 24-5 scoring advantage in second-chance points.

-- INJURY WATCH: Golden State's Otto Porter Jr. dealt with right foot soreness that kept him out the second half of Game 5. His status is questionable. ... Warriors coach Steve Kerr could be recovered from his two-game absence with COVID-19 in time for Game 6, though that hadn't yet been determined. He needs two negative tests first. ... Morant has missed two games and remains doubtful to return this postseason.

-- PRESSURE IS ON: The Warriors. Memphis is the youngest team to reach this round in 25 years, so forcing this series to a sixth game already is a big accomplishment with Morant injured. Each team has had a blowout win with each of the other three games decided by five points or less. But over the last two games without Morant, Memphis has led for all but the final 45.7 seconds of Game 5. 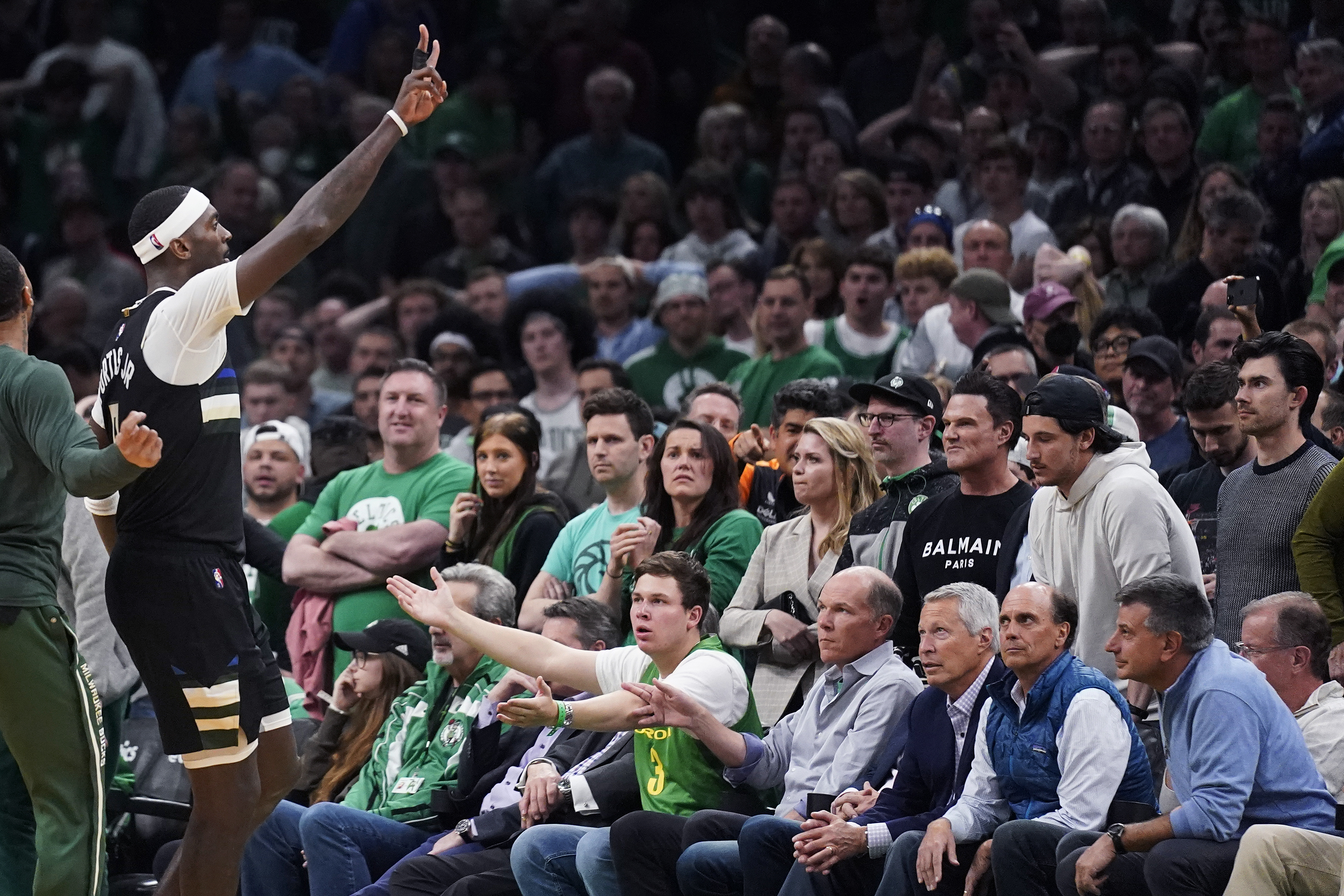 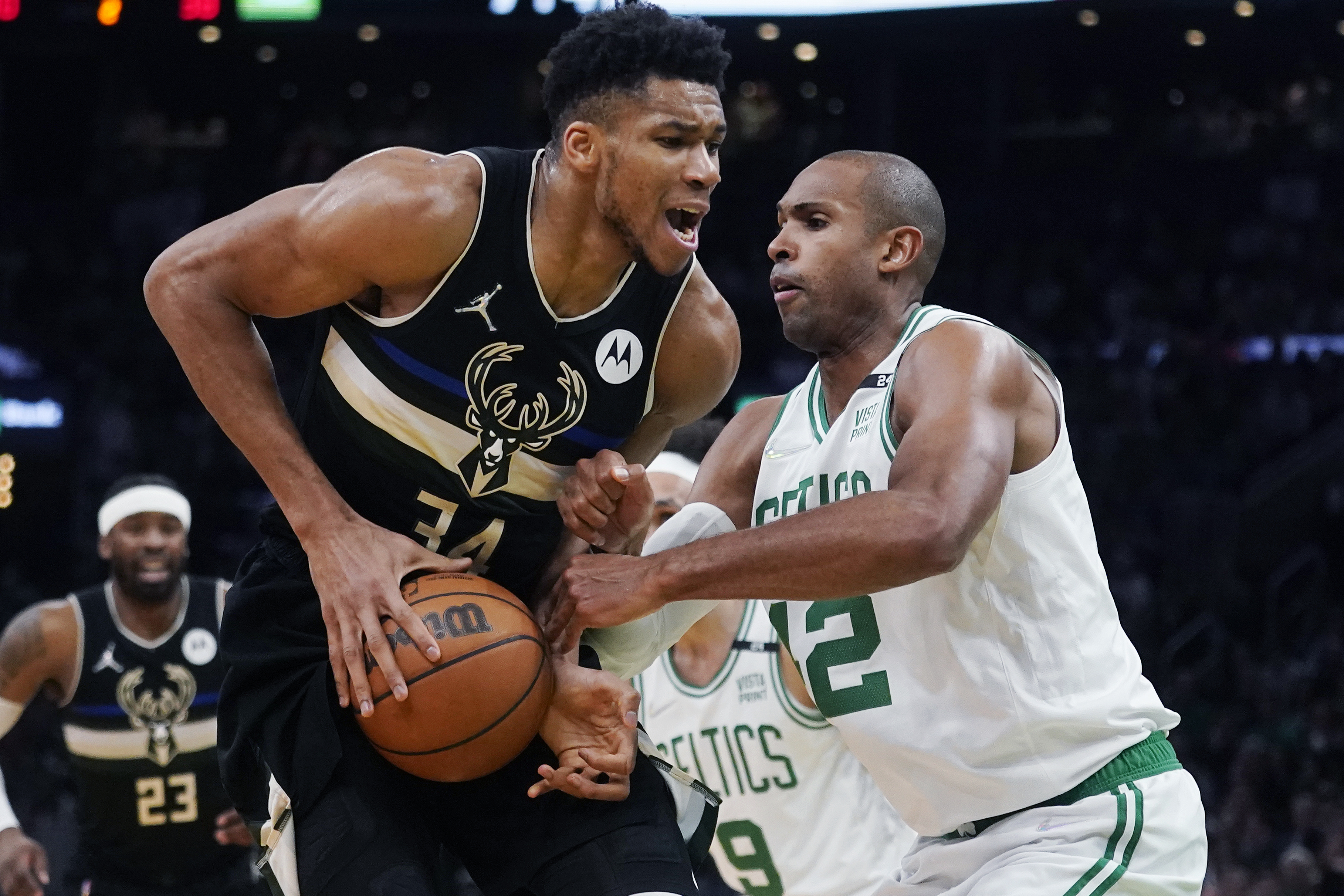 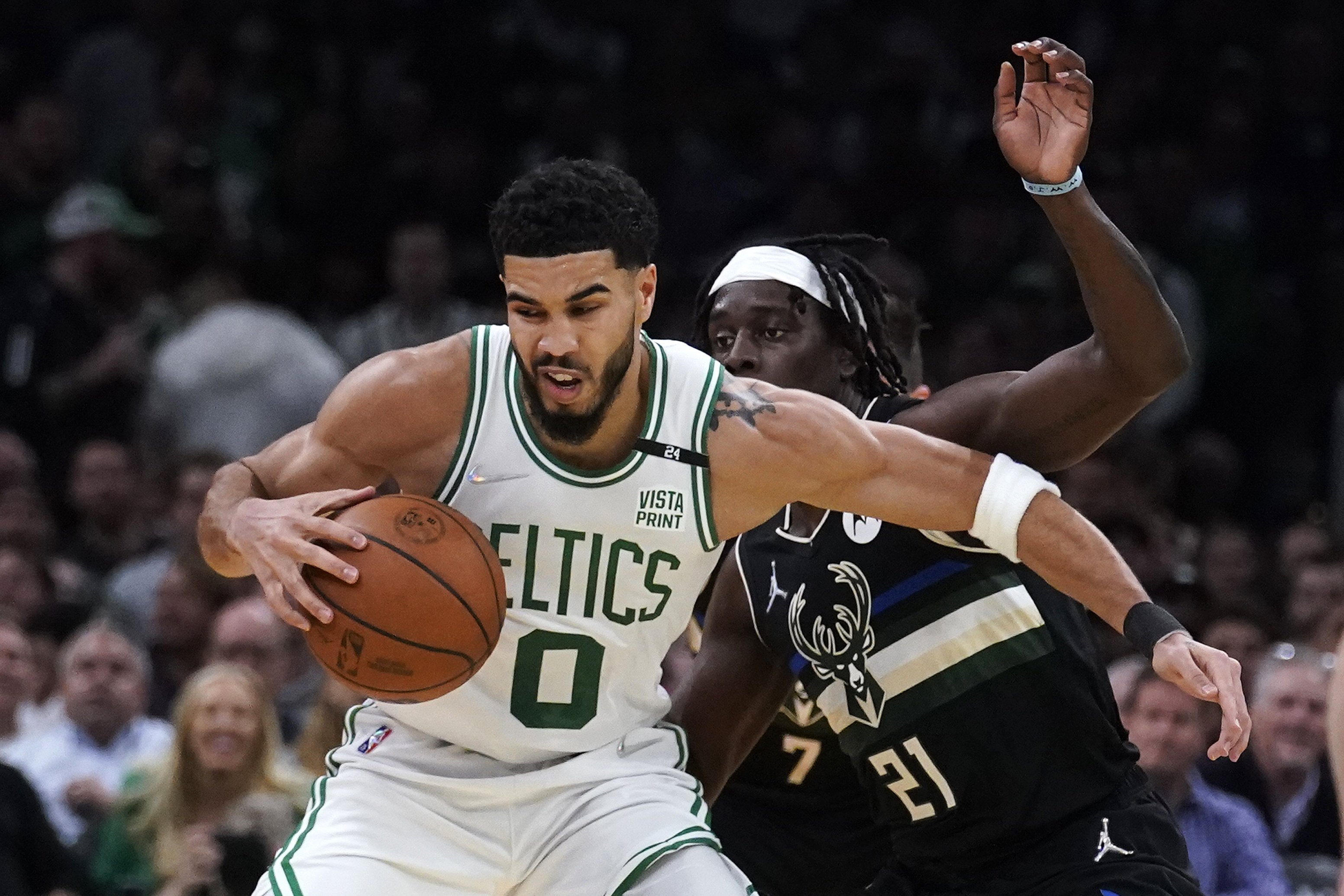 Boston Celtics forward Jayson Tatum (0) tries to pivot around Milwaukee Bucks guard Jrue Holiday (21) during the first half of Game 5 of an Eastern Conference semifinal in the NBA basketball playoffs, Wednesday, May 11, 2022, in Boston. (AP Photo/Charles Krupa) 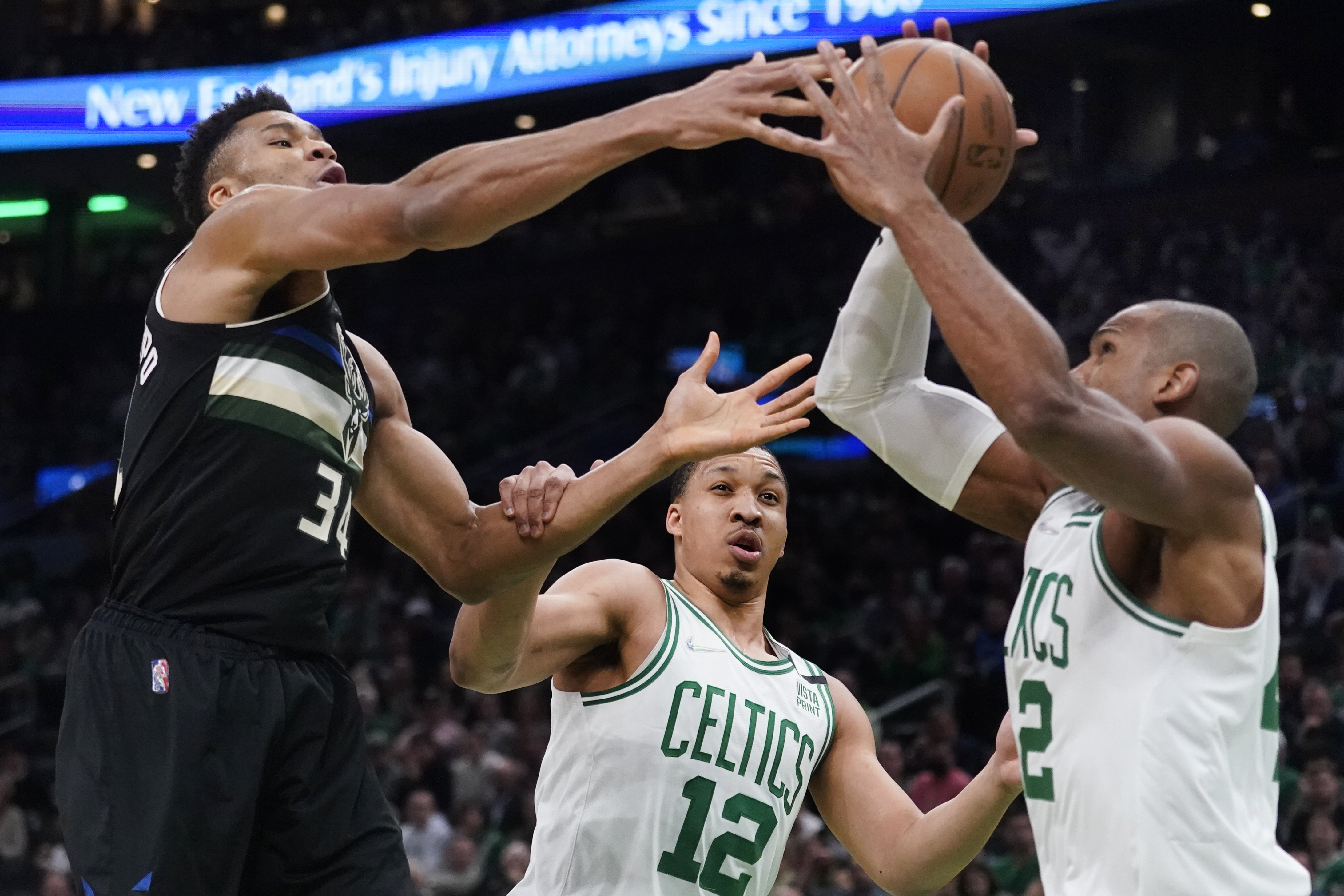 Milwaukee Bucks forward Giannis Antetokounmpo (34) and Boston Celtics center Al Horford, right, battle for the ball during the first half of Game 5 of an Eastern Conference semifinal in the NBA basketball playoffs, Wednesday, May 11, 2022, in Boston. (AP Photo/Charles Krupa) 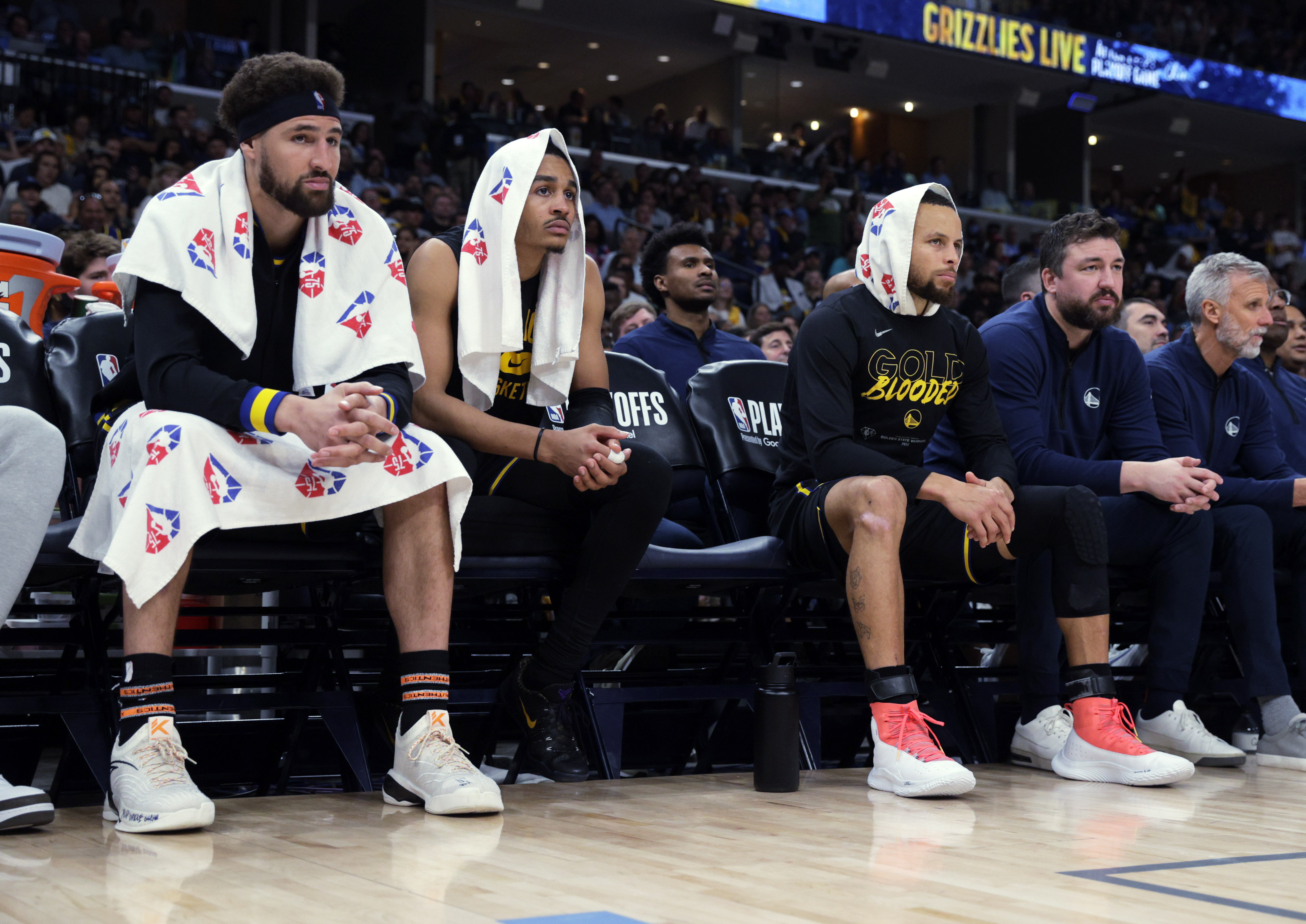 Golden State Warriors Klay Thompson (11), Jordan Poole (3), and Stephen Curry (30) watch from the bench during the second half of Game 5 of an NBA basketball second-round playoff series against the Memphis Grizzlies, Wednesday, May 11, 2022, in Memphis, Tenn. (Carlos Avila Gonzalez/San Francisco Chronicle via AP) 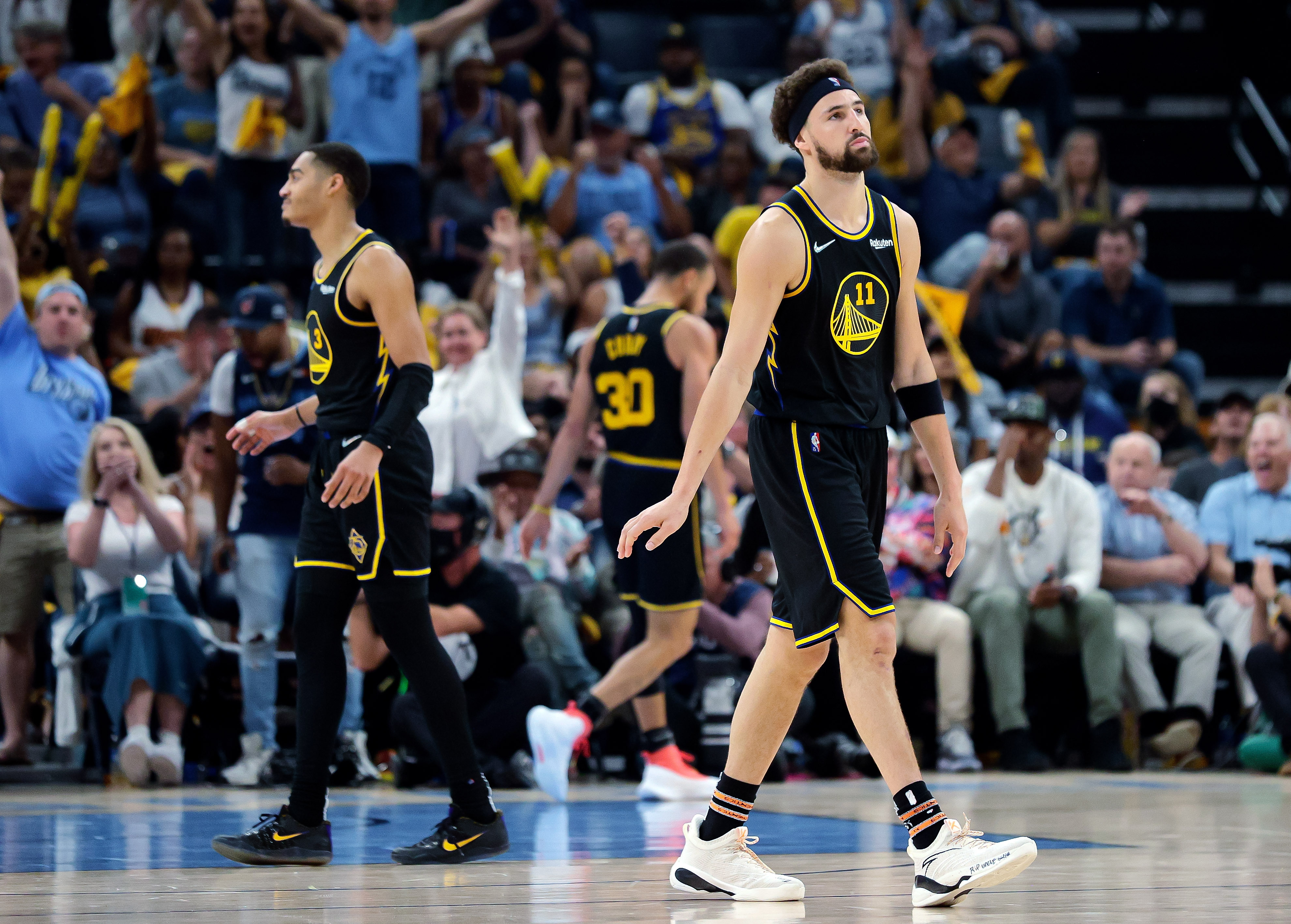 Golden State Warriors Klay Thompson (11) reacts to a foul call during the first half of Game 5 of an NBA basketball second-round playoff series against the Memphis Grizzlies, Wednesday, May 11, 2022, in Memphis, Tenn. (Carlos Avila Gonzalez/San Francisco Chronicle via AP) 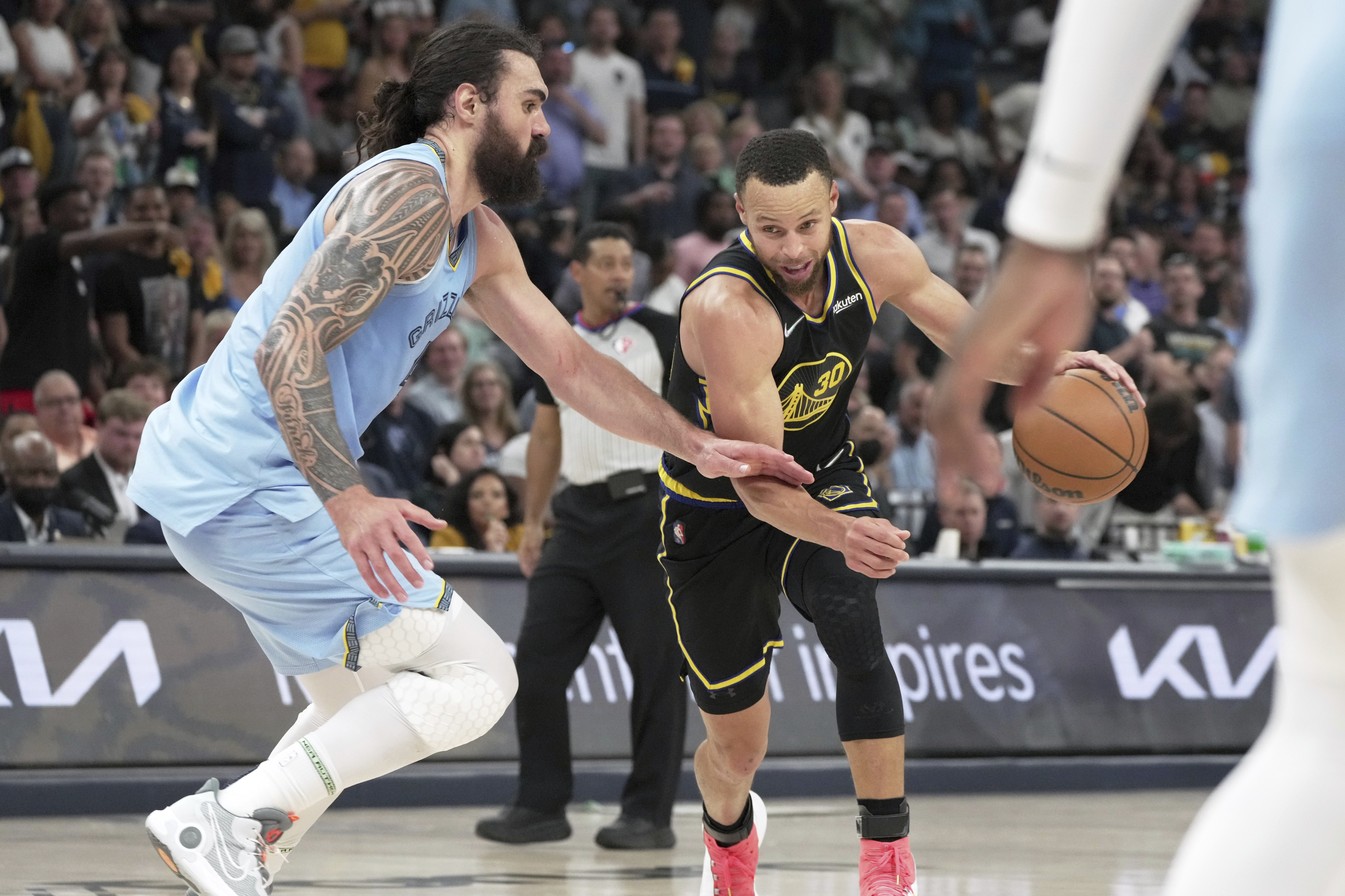 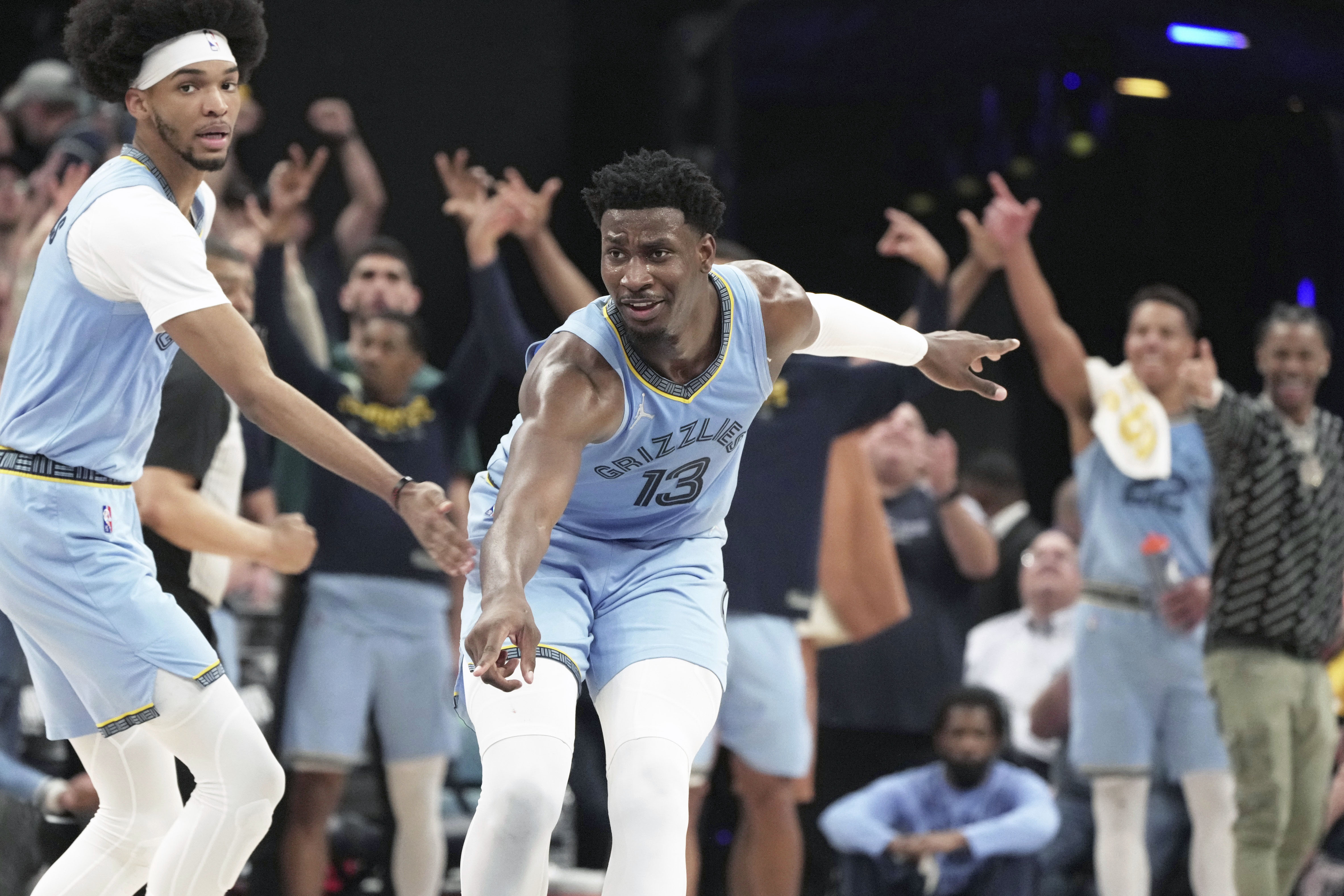 Memphis Grizzlies' Jaren Jackson Jr. (13) reacts after he makes a basket in the second half of Game 5 of an NBA basketball second-round playoff series against the Golden State Warriors Wednesday, May 11, 2022, in Memphis, Tenn. (AP Photo/Karen Pulfer Focht) 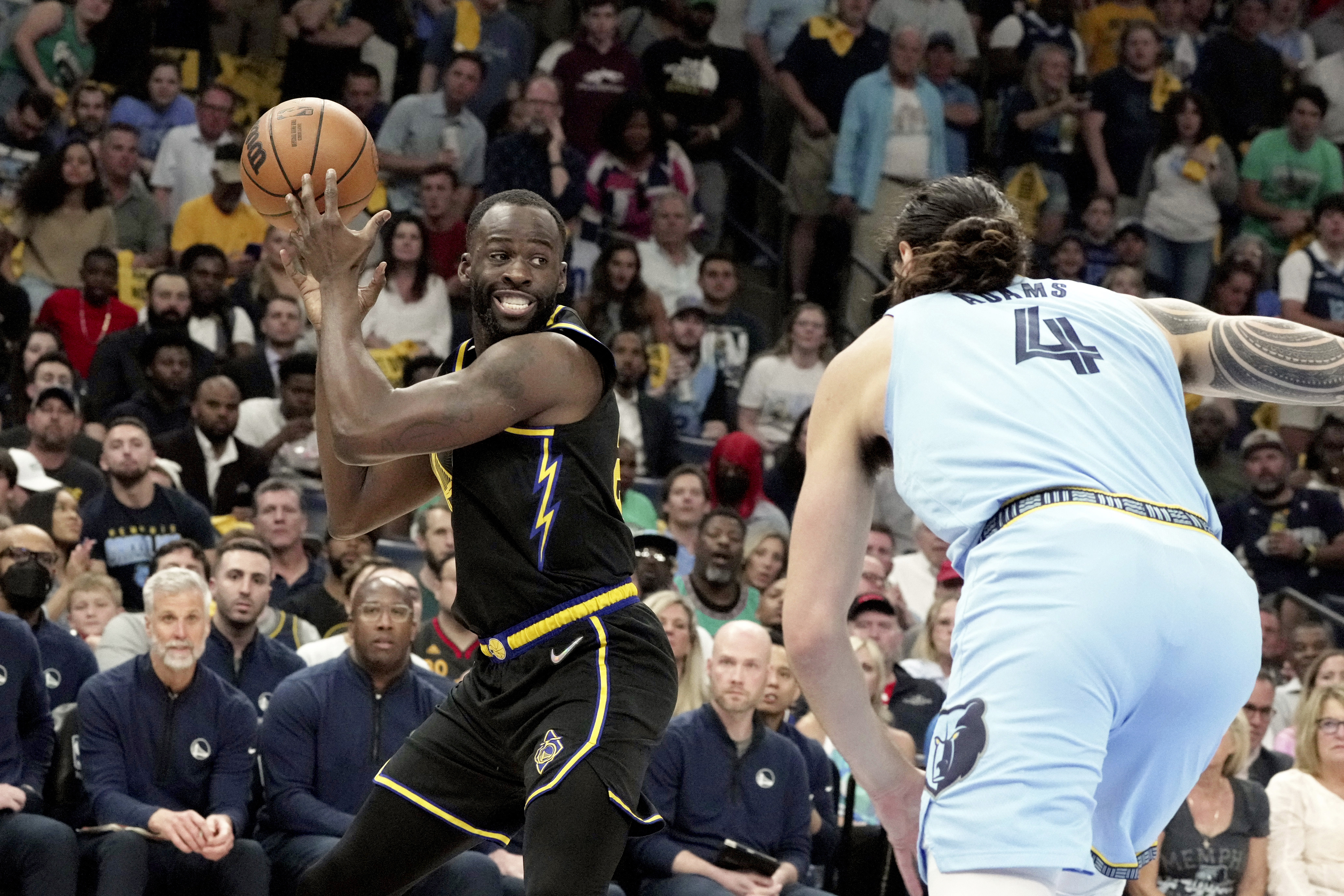