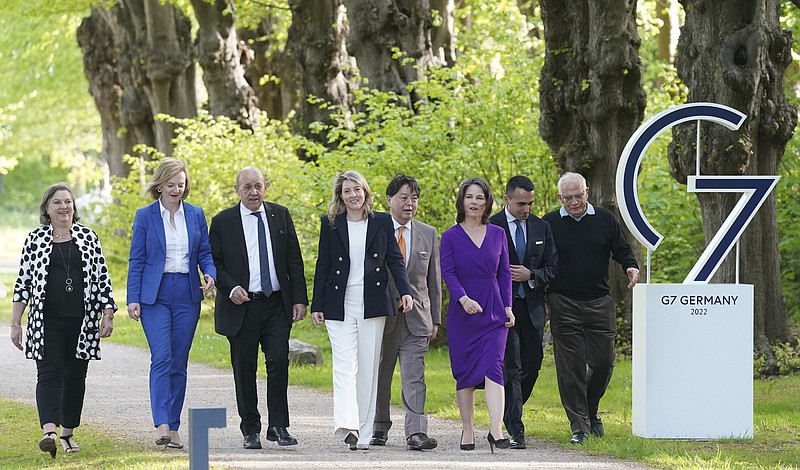 From left, Victoria Nuland, Under Secretary of State and Political Director at the U.S. Department of State, Elizabeth Truss, Foreign Minister of the United Kingdom, Jean-Yves Le Drian, Foreign Minister of France, Melanie Joly, Foreign Minister of Canada, Hayashi Yoshimasa, Foreign Minister of Japan, Annalena Baerbock, Luigi Di Maio, Foreign Minister of Italy, and Josep Borrell, High Representative of the EU for Foreign Affairs and Security Policy, walk at the summit of foreign ministers of the G7 group of leading democratic economic powers, in Weissenhäuser Strand, Thursday, May 12, 2022. The meeting under German presidency will be chaired by Foreign Minister. In addition to the USA and Germany, the G7 also includes Great Britain, France, Italy, Canada and Japan. (Marcus Brandt/pool photo via AP)

WEISSENHAUS, Germany -- Top diplomats from the Group of Seven wealthy nations gathered Thursday in northern Germany for a three-day meeting centered on Russia's war against Ukraine and the wider impact it is having around the world, particularly on food and energy prices.

German Foreign Minister Annalena Baerbock, the meeting's host, said the conflict already had become a "global crisis" because shipments of staple crops are stuck in Ukraine, a major agricultural exporter.

"Twenty-five million tons of grain are currently blocked in Ukrainian ports, particularly Odesa," Baerbock said. "Grain that's food for millions of people around the world, and which is needed particularly urgently in African countries and the Middle East."

"That's why we are discussing how the grain blockade exerted by Russia can be unblocked, how we can get the grain out to the world," she added.

Baerbock warned that climate change also is a factor in the brewing global food emergency, and it's another topic the ministers plan to discuss during their meeting in Weissenhaus, a resort on Germany's Baltic Sea coast northeast of Hamburg.

About 3,500 police officers were deployed at the event site to provide security.

The foreign ministers of Ukraine and neighboring Moldova, which fears it could become the next target of Russia's aggression, have been invited to attend the meeting as guests. Indonesia's foreign minister, whose country chairs the Group of 20 major economies this year, is expected to join remotely for part of the meeting Friday, when relations with China are on the agenda.

Kuleba said he considered it a "signal of strength" that Chancellor Olaf Scholz's center-left Social Democratic Party had dropped its opposition to providing Ukraine with heavy weapons.

He also expressed hope that the European Union would soon approve Ukraine's application to start the process of joining the bloc. French President Emmanuel Macron has suggested it could be decades before Ukraine is ready to become a full EU member.

Baerbock, who recently became the first top representative of Germany to travel to Ukraine since the start of the war, offered support for Ukraine's EU application. Asked about Ukraine's request for fighter jets, Baerbock was less encouraging, citing the risk of NATO being drawn into a conflict with Russia.

"When it comes to no-fly zones and aviation support we've already taken a clear position," she told reporters.

The NATO gathering will also hear from the foreign ministers of Sweden and Finland as the two countries are poised to join the Western military alliance amid concerns over the military threat from Russia.