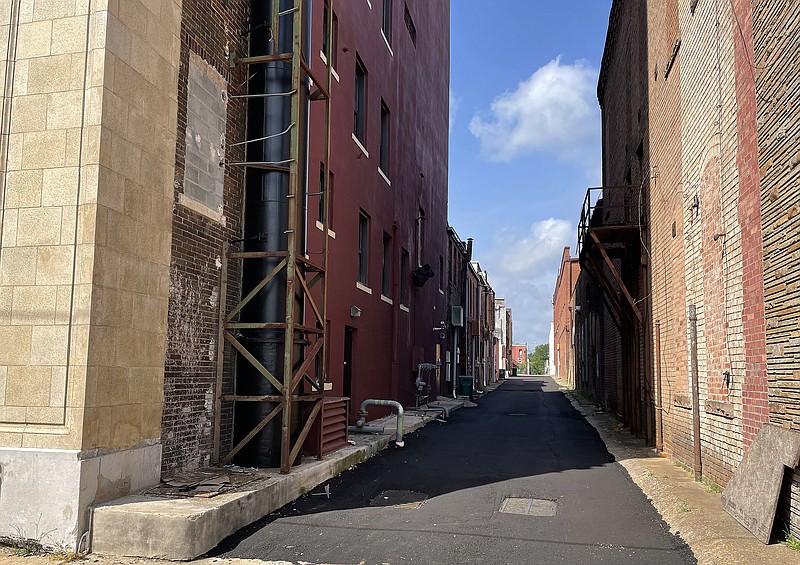 The alley behind West Broad Street as seen from North State Line Avenue is shown Wednesday in Texarkana, Texas. A group called Activated Alley TXK, which includes a Leadership Texarkana project team, aims to make the alley an attractive pedestrian thoroughfare from Zapata's restaurant on the Arkansas side to the Kress Gap on the Texas side. The group will host an "Open Alley" event Friday evening to inform the public about the plan. (Staff photo by Karl Richter)

TEXARKANA -- A group that wants to transform an alley into a downtown attraction will share its vision with the public Friday.

Activated Alley TXK sees potential in the alley behind Broad Street and is working with both Texarkanas' governments to make it a pleasant pedestrian thoroughfare connecting the Arkansas side and Texas side of downtown. On Friday, it will show off the concept by hosting an "Open Alley" in conjunction with the monthly Downtown Live art event.

In what the group is calling a soft opening, volunteers will be on hand in the alley space between North State Line Avenue and the Kress Gap to answer questions and get residents' input. A grand opening is planned for the 150th anniversary of Texarkana's founding in December 2023.

That portion of the alley was recently repaved with asphalt as a result of Texas-side City Manager David Orr's support for the plan, and Arkansas-side City Manager Jay Ellington is on a project team with professional development group Leadership Texarkana that proposed and is driving the project, organizer Chris Bachers said.

"This could be a way to steer the way things are going," Bachers said. "A lot of us want to help downtown become a place for everyone."

In addition to promoting pedestrian traffic, lighting the alley and making it more inviting would improve visitors' perception that downtown is safe, he said.

Friday's Open Alley will feature food trucks and tables in the Kress Gap, as well as opportunities for locals to share their ideas.

"We want the public to help us," Bachers said.