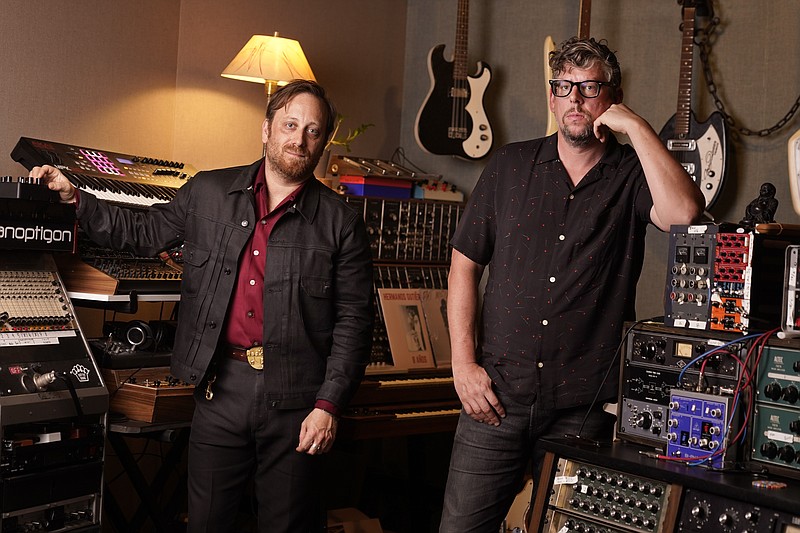 NASHVILLE, Tenn. -- Two decades ago, two college dropouts from Akron, Ohio, recorded a rock album together and sent it to a tiny label in Los Angeles. But then came the hard part: Dan Auerbach and Patrick Carney actually had to learn to play the music live.

Both in their early 20s, Auerbach had experience playing guitar in a bar band, but Carney had never played drums before they recorded "The Big Come Up," The Black Keys' first album, released in 2002.

At their first show March of 2002, Auerbach recalled the owners of the Beachland Tavern in Cleveland telling them they needed to fill 30 minutes. "We're like, 'No problem, we got that,'" Auerbach said. "We played everything twice as fast. Totally blacked out."

The performance got them invited back for more shows, eventually selling out the venue. Turns out that failing at college was probably the best thing that ever happened to them.

"We realized that we weren't really college material," Carney said.

Instead, they built slowly but steadily off that first show, attracting bigger crowds, larger record labels and critical praise with each album.

On their 11th studio album "Dropout Boogie," the Grammy-winning duo, now raising school-age children of their own, are reflecting on their early years when they bonded over records as varied as Junior Kimbrough, The Wu-Tang Clan and Captain Beefheart and played raw, fast and loose in local venues.

"We wouldn't be paying for expensive private school if we hadn't dropped out of school," Carney says with a laugh.

Two decades into their career, the pair still operate mostly like they did on those first records. On "Dropout Boogie," they wrote songs mostly in the studio, not bringing in a lot of pre-written material. Three or four songs on the record are just first takes at recording. The rawness and the imperfections were something they learned from those influential sounds of '70s-era experimental rock and hill country blues. They've kept that creative momentum moving in recent years, as "Dropout Boogie" is their third record released in four years.

"That's why we kept playing together when we were 16, 17, because as soon as we started playing, it was instant. It was so easy," said Auerbach.

On the new record, they branched out with collaborators Billy Gibbons of ZZ Top, Greg Cartwright of the Memphis rock band Reigning Sound and songwriter and producer Angelo Petraglia.

"It opened up a whole world of possibilities of like, 'Oh yeah, our Rolodex is pretty deep,'" Carney said. "We can just like call a lot of people, make a lot of music."

Auerbach said when the frontman of ZZ Top stopped by their Easy Eye Studio in Nashville, he didn't even bring his own guitar, just a bottle of wine, and went to work immediately. His solo on their song, "Good Love," is classic Texas blues-rock that ZZ Top perfected, his guitar screaming with pinched harmonics over a distorted and fat bass line.

One song came to them from a musicologist named David Evans, a retired University of Memphis professor, who had been sharing with Auerbach rare field recordings of blues artists from Mississippi. One of those recordings he made was a cheerleading squad from Senatobia, Mississippi, in the '70s singing "Hey, hey, over there/Your team is looking good/But not as good as ours."

The lines stuck in Auerbach's head and at the end of the recording session, when the album was pretty much wrapped, they decided to cover it. Singer Sierra Ferrell jumped in for harmony background vocals. After recording the song, Carney called the band's attorney.

"I was like, 'We have a job for you,'" Carney said. "And she's like, 'What's that?' 'OK, there's this obscure field recording of a cheerleading squad from the middle of nowhere, Mississippi. I need you to find the writing credit so that we don't get sued.'"

The song was based on "The Girl Can't Help It," a song written by Bobby Troup and performed by Little Richard. So Troup has a songwriting credit on the song, "Your Team Is Looking Good," with The Black Keys.