Warrant issued for woman accused of abuse of corpse 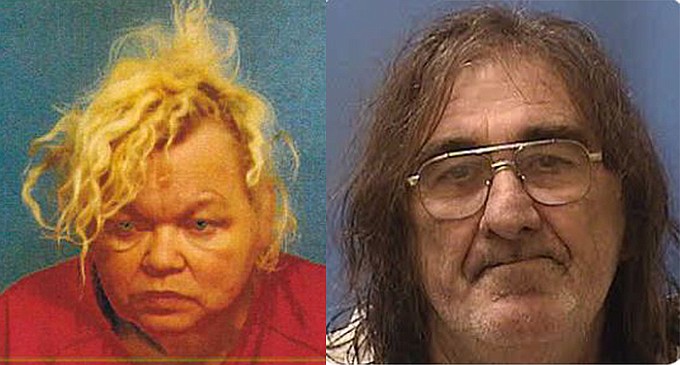 TEXARKANA, Ark. -- A woman accused of leaving her sister's body to decompose for years has been wanted by authorities in Miller County since failing to show for a pretrial hearing in February.

Debbie Sue Himes, 58, and her longtime boyfriend, Tony Ken Hooker, 65, were arrested in October 2019 after the skeletonized remains of Christy Himes were found on a bed in one of two adjacent houses occupied by the couple. Christy Himes was Debbie Himes' disabled sister, and Hooker was her legal guardian.

Himes failed to appear Feb. 8 for a pretrial hearing before Circuit Judge Brent Haltom, prompting the judge to issue a warrant for her arrest.

Hooker is serving a 20-year sentence in the Arkansas Department of Corrections for crimes, including abuse of a corpse, abuse of an endangered or impaired person and sexual assault. It was the sexual assault charge against Hooker that led officials to look in on 40-year-old Christy Himes in October 2019.

The sexual assault victim is a relative of Debbie Himes and Christy Himes and when it became clear Hooker might be arrested, another relative contacted Adult Protective Services and asked them to perform a welfare check on Christy Himes, according to a probable cause affidavit.

The woman who contacted Adult Protective Services reported that she was worried Debbie Himes would not be able to adequately care for Christy Himes with Hooker in jail. Debbie Himes suffered a stroke in November 2017 and at times uses a wheelchair.

One of Debbie Himes' daughters arrived at the house when an APS caseworker and a Texarkana, Ark., police officer were there to conduct the welfare check Oct. 3, 2019. The daughter reportedly told them that she and her sisters are not close to their mother and that she last saw Christy Himes around Thanksgiving 2015.

She reported that sometime after Hooker's mother died in 2016, Hooker, Debbie Himes and Christy Himes moved into the larger of two adjacent houses owned by Hooker in the 1200 block of Martha Street and that the smaller house had been vacant about three years.

When asked where she thought Christy Himes might be, the daughter allegedly replied, "dead or maybe sold as a sex slave."

Investigators determined the father actually died in May 2019, not in September 2019, and that Christy Himes was not in Alaska.

Concern for Christy Himes' welfare increased with the disproved explanations allegedly provided by Debbie Himes and with Debbie Himes' refusal to allow the caseworker and police officer to enter the unoccupied house. Police Sgt. Paul Nall and others were called to the scene, and search warrants were acquired for both of Hooker's houses.

"The smell inside the home was almost unbearable," the affidavit states.

Investigators and crime scene detectives noted the smaller home was filthy and filled with trash. A dog kennel full of animal waste sat on a table in the living room and black mold was noticeable on the ceiling.

"There was a large amount of animal feces and urine on the floor, along with hay, deceased insects, mold, mildew, dog bones, dog food, animal hair, empty food containers, pieces of food, numerous empty two-liter (soda) bottles, an oxygen tank, an old fish tank, along with various other pieces of junk and garbage," the affidavit states.

When investigators opened the door to a bedroom, they immediately noticed a pile of bones protruding from a plastic garbage bag lying on an old metal-framed bed.

"On the bed were several obvious bones which appeared to have been chewed on by animals," the affidavit states. "The body was almost fully decomposed with only a small amount of skin and hair left on the skull."

When interviewed by detectives the same day the body was found, Debbie Himes allegedly told them Christy Himes died a few days after having a seizure but did not say when the death occurred. When asked why she didn't call 911 when her sister died, Debbie Himes allegedly told detectives she could not afford a funeral. When asked what she and Hooker had been doing with Christy Himes' federal disability payments, she allegedly said, "I used it to pay the bills."

Investigators interviewed Hooker while he was in custody on the sexual assault charge Oct. 7, 2019. Hooker told them Christy Himes died sometime after his mother died in June 2016 but before Debbie Himes suffered a stroke in November 2017. Hooker allegedly made no mention of Christy Himes suffering a seizure but did say he noticed Christy Himes appeared to weaken in the days before her death.

"He thought the dog might have been taking her food," the affidavit states.

Hooker told investigators it was him who stuffed Christy Himes into a garbage bag, taped it shut and placed it on her bed in the smaller Martha Stree house where it may have remained for years. Hooker told investigators that he and Debbie Himes continued to reside in the house with the corpse until moving into the larger house after Debbie Himes suffered a stroke in November 2017.

Hooker said he came to think of the smaller of his two Martha Street houses as "Christy's tomb" and that he continued to use the clothes dryer in the bedroom with the decomposing body even after he and Debbie Himes moved to the larger house.

A report filed in January subsequent to a mental evaluation of Debbie Himes states that she is competent to stand trial and that she appeared to be faking symptoms of cognitive impairment.

Himes could face an additional charge for failing to appear in court on the felony charges. A warrant for her arrest remains active.