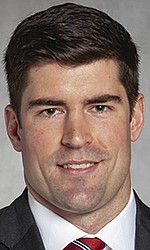 LITTLE ROCK -- An Arkansas county has corrected an error on its ballots that misidentified Senate hopeful Jake Bequette as "Jack," and another county is working to correct the same typo.

A judge on Friday declined to dismiss the lawsuit filed against election officials by Bequette, who's challenging Sen. John Boozman in the May 24 Republican primary, the Arkansas Democrat-Gazette reported. Bequette filed a lawsuit seeking to force election officials to correct the error on ballots in Craighead and Phillips counties and notify voters of the mistake.

But Circuit Judge Mackie Pierce said he considered the issue moot because Craighead County corrected the error Thursday and Phillips County was working to correct it. Pierce said it was troubling that the error wasn't fixed before early voting began Monday.

Bequette is one of three candidates challenging Boozman in the primary. Conservative activist Jan Morgan and Stuttgart pastor Heath Loftis are also seeking the party's nomination.