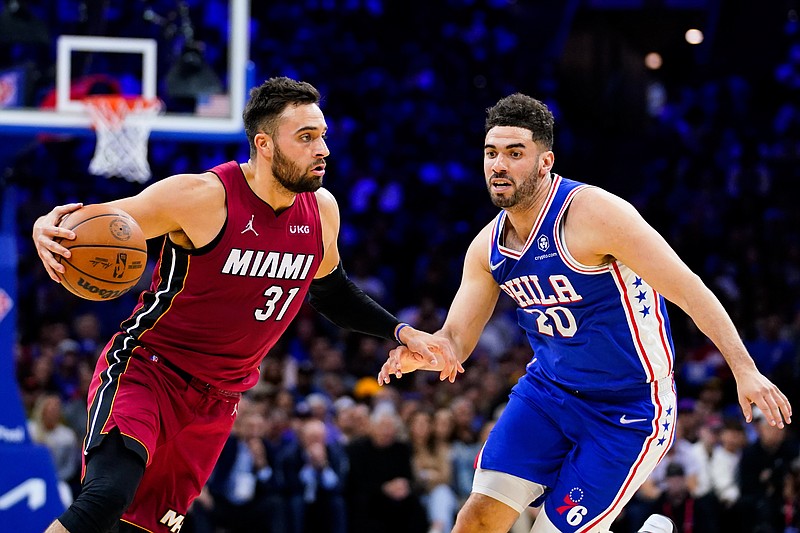 Miami Heat's Max Strus (31) drives past Philadelphia 76ers' Georges Niang during the first half of Game 6 of an NBA basketball second-round playoff series, Thursday, May 12, 2022, in Philadelphia. (AP Photo/Matt Slocum)

Division II player when he started college. Ended up at DePaul and went undrafted. Bounced around a couple of summer leagues. Went to training camp with Boston and didn't make the team. Signed two-way contracts with three different franchises. Spent time in the G League. Played all of six minutes as a rookie in the NBA two seasons ago.

And now, he's a starter on a team going to the Eastern Conference finals.

For the ninth time overall, and for the sixth time in the last 12 seasons, the Miami Heat are in the NBA's Final Four. A 99-90 win in Philadelphia on Thursday night gave the Heat a 4-2 series win in an East semifinal series, sending the Heat into the conference final against Boston or Milwaukee.

That series, no matter the opponent, starts Tuesday in Miami.

"It's one of the biggest moments, not only in my career, but in my life," Strus said. "This is the moment you want to be in being a basketball player and doing what we do for a living. And I'm super excited and want to start tomorrow."

Jimmy Butler led the way for Miami with 32 points, continuing his postseason of incredible numbers. Strus added 20 points, 11 rebounds and five assists for the Heat, joining a very small club of Miami players who have done that in postseason play.

LeBron James did it seven times. Bam Adebayo has three such games, Butler has two, and three players have one -- Dwyane Wade, Shaquille O'Neal and Max Strus. Few might have suspected a couple years ago that his name would have been in a sentence alongside players like those, but here he is.

"He's gotten so much better from the time we started this year," Heat forward P.J. Tucker said. "He's definitely our most improved. He's really stepped up to be a guy that we count on, not only to make shots but to be aggressive. ... Even if he didn't believe it in himself, we believed in him."

Strus was playing a role for the Heat until late March, when Miami coach Erik Spoelstra decided it was time for a bigger role. The No. 1 seed in the East was beginning to slip away from the Heat and Spoelstra made some rotation tweaks -- the most notable one being putting Strus in the starting lineup over Duncan Robinson.

Spoelstra agonized over the decision. The Heat are 14-3 when Strus starts since.

"He did everything last year and this summer to put himself in position to be able to take on a bigger role," Spoelstra said.

It wasn't just Strus who did that. Gabe Vincent -- like Strus, one who went undrafted -- had to start at point for Miami in all four of the Heat wins against Philadelphia because Kyle Lowry has a bad hamstring. And hamstrings are unpredictable, meaning there's no assurance Lowry will be ready for Game 1 against the Bucks or Celtics next week either.

Without those two, this series could have easily had a very, very different outcome for Miami.

But that wasn't the case, the Heat headed out of Philadelphia happy, and have half of the 16 wins they'll need to capture an NBA title.

Strus can't wait for the next challenge. He thinks the Heat are built for this.

"Our connection and trust in each other, it's there. It's special," Strus said. "You can tell. It's not just on the court, it's off. We all really like each other and enjoy each other, and love being around each other and want to play hard for each other." 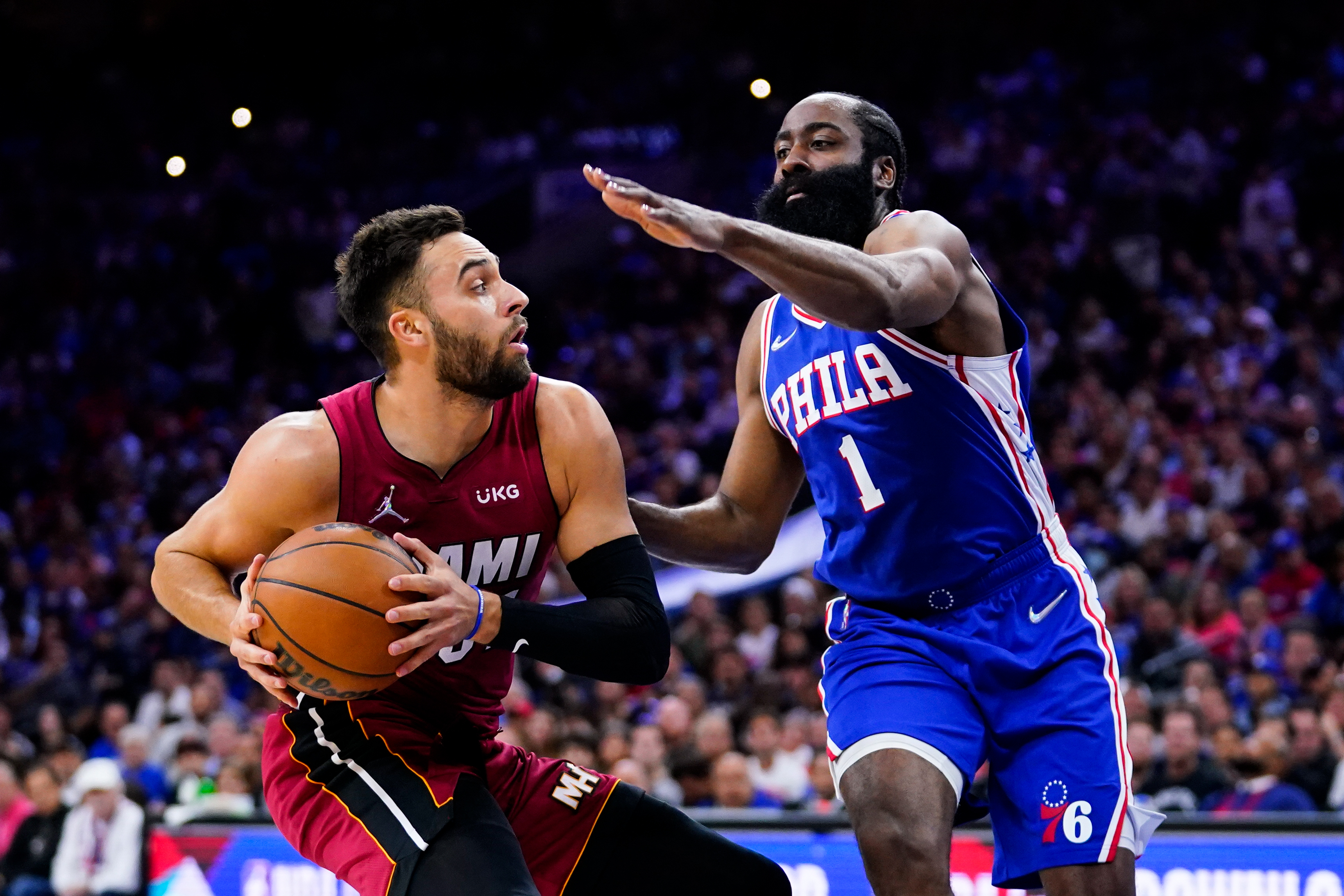 Philadelphia 76ers' James Harden (1) defends against Miami Heat's Max Strus during the first half of Game 6 of an NBA basketball second-round playoff series, Thursday, May 12, 2022, in Philadelphia. (AP Photo/Matt Slocum) 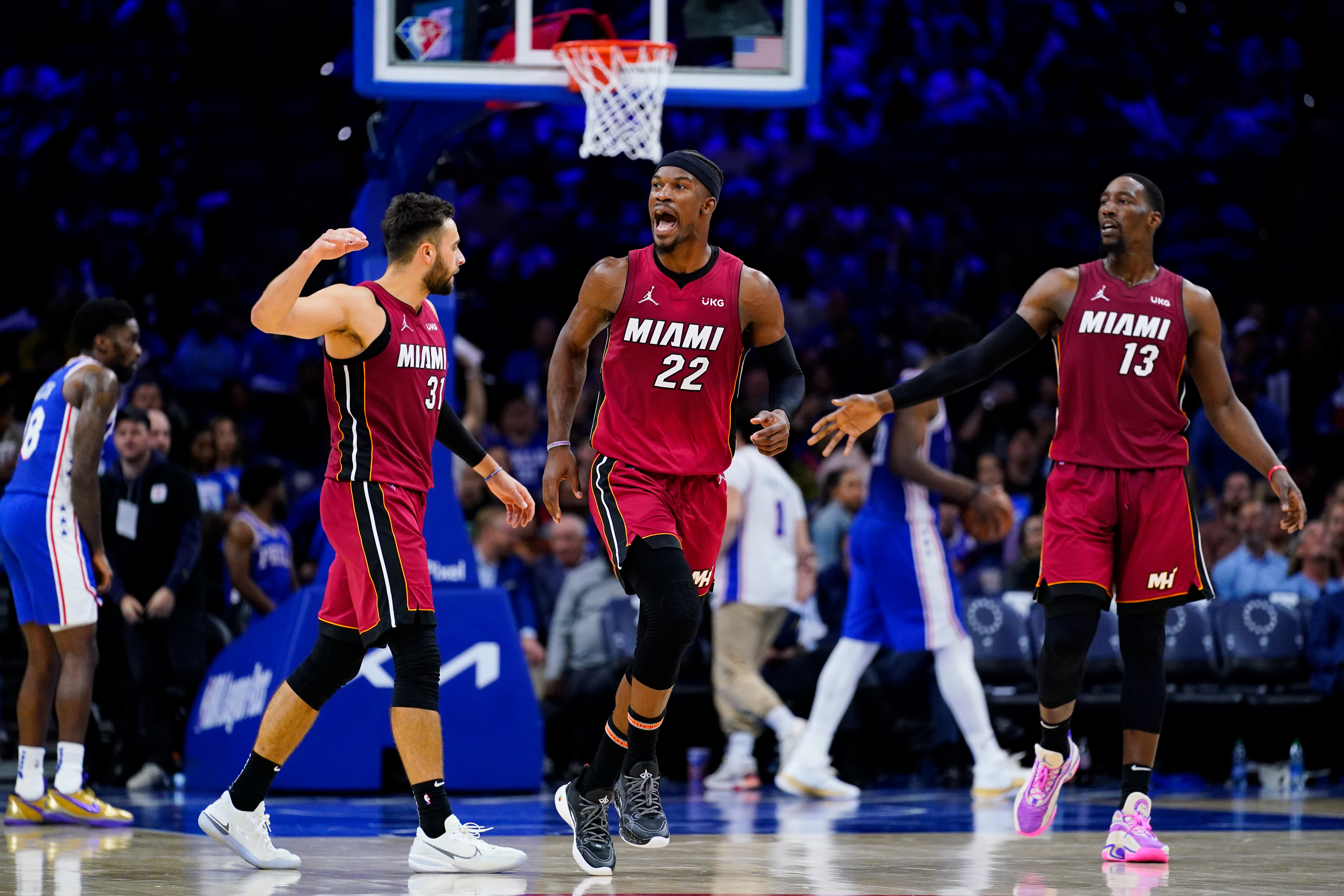 Miami Heat's Jimmy Butler (22), Max Strus (31) and Bam Adebayo (13) celebrate during the second half of Game 6 of an NBA basketball second-round playoff series against the Philadelphia 76ers, Thursday, May 12, 2022, in Philadelphia. (AP Photo/Matt Slocum)