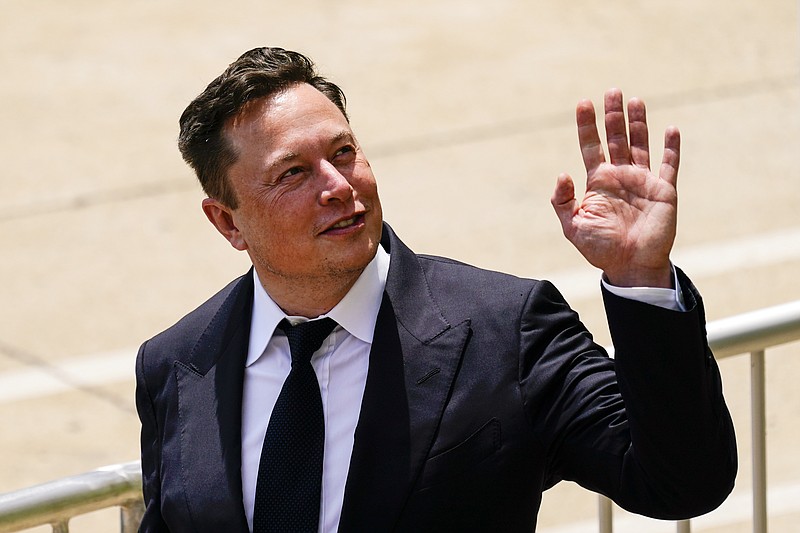 FILE - CEO Elon Musk departs from the justice center in Wilmington, Del., Tuesday, July 13, 2021. Musk says his planned $44 billion purchase of Twitter is "temporarily on hold" pending details on spam and fake accounts on the social media platform. The announcement that the Tesla billionaire tweeted Friday, May 13, 2022 is another twist amid signs of internal turmoil over his planned buyout of Twitter. (AP Photo/Matt Rourke, File)

DETROIT -- Tesla billionaire Elon Musk has put his plan to buy Twitter on temporary hold, raising fresh doubts about whether he'll proceed with the $44 billion acquisition.

Musk tweeted early Friday that he wanted to pinpoint the number of spam and fake accounts on the social media platform. He has been vocal about his desire to clean up Twitter's problem with "spam bots" that mimic real people, and he appeared to question whether Twitter was underreporting them.

But the company has disclosed in regulatory filings that its bot estimates might be low for at least two years, leading some analysts to believe that Musk could be raising the issue as a reason to back out of the purchase.

On Friday, Musk subsequently tweeted that he's "still committed to acquisition." Neither Twitter nor Musk responded Friday to requests for comment. Musk has conducted a long flirtation with Twitter that culminated in an April deal to acquire the social platform.

The problem of fake accounts on Twitter is not a secret.

In its quarterly filing with the U.S. Securities and Exchange Commission, Twitter itself expressed doubts that its count of bot accounts was correct, conceding that the estimate may be low. "In making this determination, we applied significant judgment, so our estimation of false or spam accounts may not accurately represent the actual number of such accounts, and the actual number of false or spam accounts could be higher than we have estimated," the filing says.

A review of Twitter filings with the SEC shows that the company's estimate of spam bot accounts and similar language expressing uncertainty about it have been in Twitter's quarterly and annual reports for at least two years, well before Musk made his offer.

Sara Silver, a professor of business journalism and financial communication at Quinnipiac University, said it appears Musk is using the number of spam accounts as a pretext to pull out of the deal.

"To claim that this is the reason that he's putting the deal on pause, it's not credible," Silver said. "This is not a new issue for him. It's not just entering his consciousness now."

Stock in both Twitter and Tesla swung sharply in opposite directions Friday afternoon, with Twitter's stock falling nearly 9% and shares of Tesla, which Musk had proposed using to help fund the Twitter deal, rising about 8%.

But shares of Tesla, which Musk has been selling to fund some of the acquisition of Twitter, have tumbled since it was revealed the social platform had become a Musk target.

Tesla shares have lost a quarter of their value in the last month, and have fallen from about $1,150 in early April when Musk confirmed he had taken a huge stake in Twitter, to $785.25 Friday.

"It's become much more expensive for him to buy this company using his Tesla shares," Silver said.

Musk's net worth, estimated by Forbes earlier this week at $240 billion, has fallen to $223 billion as of Friday.

Tesla shares may have benefitted from Twitter bot accounts over the years as well. A University of Maryland researcher recently concluded that such bots have been used to generate hundreds of thousands of positive tweets about Tesla, potentially buoying its stock in years when it was under pressure.

Neither Tesla nor its supporters have taken responsibility for those bots.

Investors assessing the deal have had to weigh Musk's legal troubles and the possibility that acquiring Twitter could be a distraction from running the world's most valuable automaker. The proposed deal continued to pressure shares of Tesla, which had already fallen 16% this week.

Musk has already sold off more than $8 billion worth of his Tesla shares to help finance the Twitter purchase.

Originally Musk had committed to borrowing $12.5 billion with Tesla stock as collateral to buy Twitter. He also would borrow $13 billion from banks and put up $21 billion in Tesla equity.

Last week, Musk strengthened the offer for Twitter with commitments of more than $7 billion from a diverse group of investors including Silicon Valley heavy hitters like Oracle co-founder Larry Ellison.

Money from the new investors cuts the amount borrowed on the value of Tesla stock to $6.25 billion, according to the filing. The Tesla equity share could go from $21 billion to $27.25 billion.

Wedbush analyst Dan Ives, who follows both Tesla and Twitter, said Musk's "bizarre" tweet will lead Wall Street to either think the deal is likely falling apart, Musk is attempting to negotiate a lower price, or he is simply walking away by paying a $1 billion penalty.

"Many will view this as Musk using this Twitter filing/spam accounts as a way to get out of this deal in a vastly changing market," Ives wrote.

He added that Musk's use of Twitter rather than a financial filing to make the announcement was troubling and "sends this whole deal into a circus show with many questions and no concrete answers as to the path of this deal going forward."

Using Twitter to make a major announcement that moved the share prices of two companies could be problematic for Musk. Under a 2018 securities fraud settlement with the SEC, Musk has to get approval from a Tesla lawyer before tweeting anything that could influence the company's share price. It wasn't clear whether Musk got such approval for his 5:44 a.m. EDT tweet Friday announcing suspension of the Twitter deal.

The SEC already has issued subpoenas to Tesla and Musk over a tweet from last fall asking followers if he should sell Tesla stock. A court filing says Musk didn't get the required pre-approval.

Last month, a federal judge in New York rejected Musk's attempt to throw out the settlement on grounds that he signed it under duress and that it violates his right to free speech. The judge also upheld the Musk subpoena.

The dispute stemmed from an October 2018 agreement with the SEC that Musk signed. He and Tesla each agreed to pay $20 million in civil fines over Musk's tweets about having the "funding secured" to take Tesla private at $420 per share. But the funding was not lined up and Tesla remains a public company.

On Thursday, Twitter fired two of its top managers. Twitter said the company is pausing most hiring, except for critical roles, and is "pulling back on non-labor costs to ensure we are being responsible and efficient."

In a memo sent to employees and confirmed by Twitter, CEO Parag Agrawal said the company has not hit growth and revenue milestones after the company began to invest "aggressively" to expand its user base and revenue. 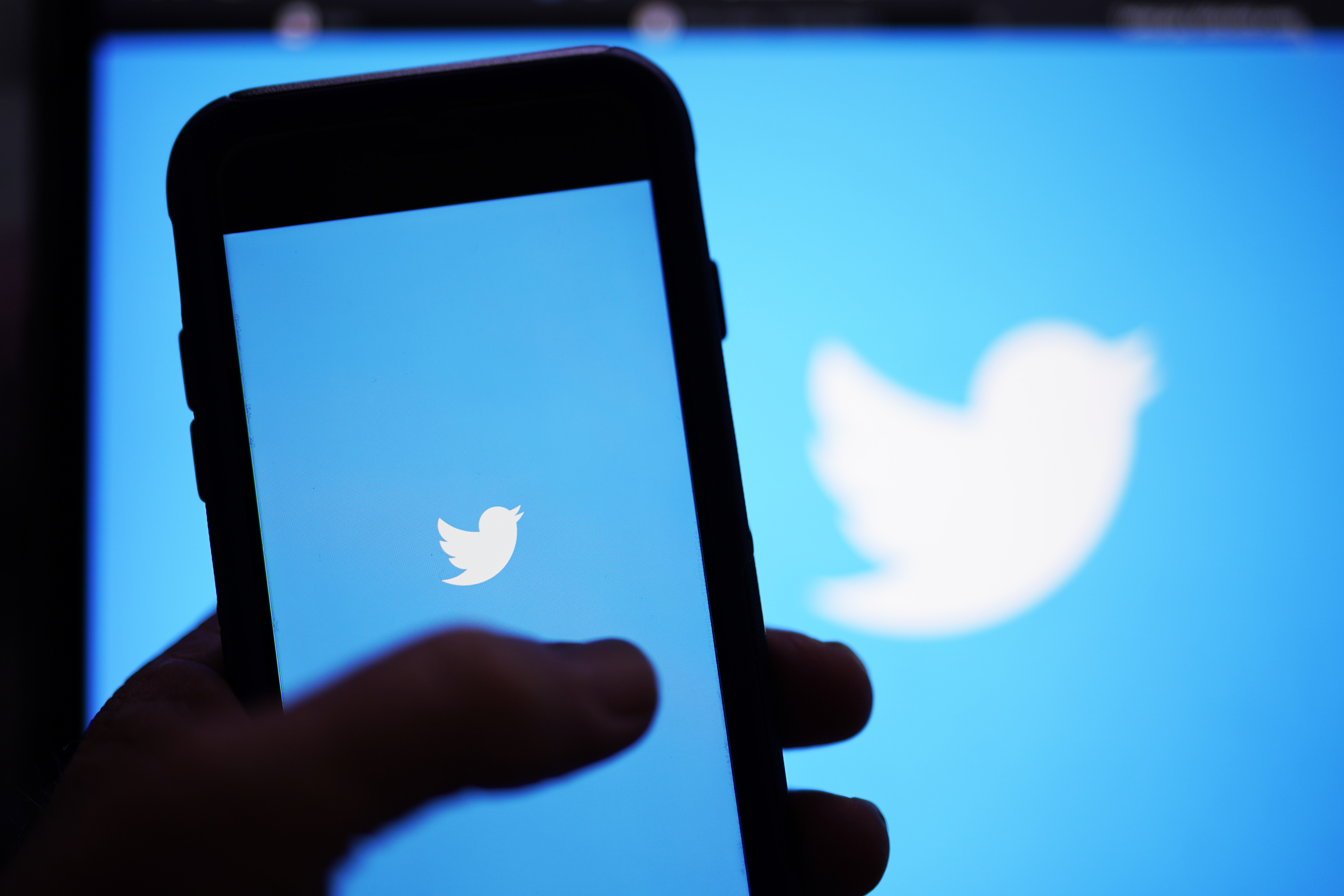 FILE - The Twitter application is seen on a digital device, Monday, April 25, 2022, in San Diego. Shares of Tesla and Twitter have tumbled this week as investors deal with the fallout and potential legal issues surrounding Tesla CEO Elon Musk and his $44 billion bid to buy the social media platform. Of the two, Musk's electric vehicle company has fared worse, with its stock down almost 16% so far this week to $728. (AP Photo/Gregory Bull, File)