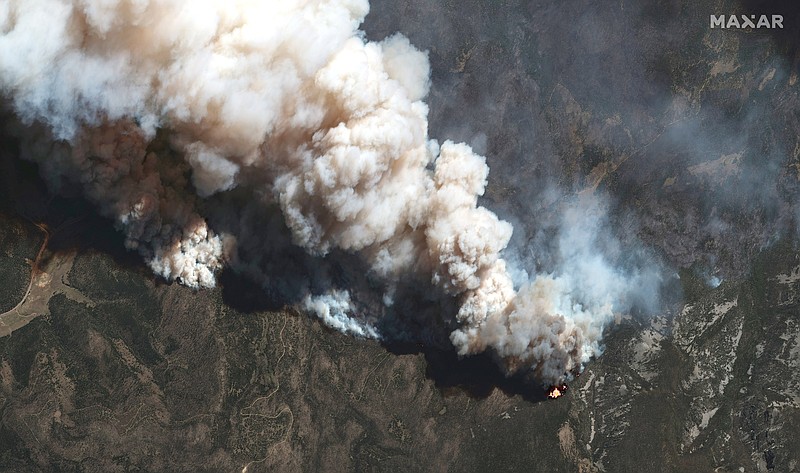 This satellite image provided by Maxar Technologies shows the active fire lines of the Hermits Peak wildfire, in Las Vegas, New Mexico, on Wednesday, May 11, 2022. Wildfire in the West is on a furious pace early this year. Wind-driven flames tearing through vegetation that is extraordinarily dry from years-long drought exacerbated by climate change has made even small blazes a threat to life and property. (Satellite image ©2022 Maxar Technologies via AP)

A monster blaze churning in northern New Mexico for more than a month has blackened enough acreage to earn a place in the state's record books.

Aside from being the largest wildfire currently burning in the U.S., the fire moving over the Sangre de Cristo mountain range is now the largest in the arid state's recorded history. It covers more than 465 square miles, or an area nearly one-quarter the size of Delaware.

More than 260 homes have burned and more evacuations were prompted over the weekend as the blaze moved through dry -- and in some cases dead -- stands of pine and fir trees. Huge columns of smoke could be seen from miles away, and fire officials and weather forecasts continue to refer to it as an unprecedented situation.

"We're trying to think bigger box, bigger picture," Nickie Johnny, an incident commander from California who is helping with the fire, said about efforts to find places miles ahead of the flames where crews can cut fire lines and mount a defense.

Fires also were burning elsewhere in New Mexico and in Colorado as much of the West has marked a notably hot, dry and windy spring. Predictions for the rest of the season do not bode well, with drought and warmer weather brought on by climate change worsening wildfire danger.

Colorado Springs enacted a fire ban after a series of fires have spread quickly due to hot and dry conditions, including a fatal one caused by smoking. Under a ban taking effect Monday, smoking and grilling will be prohibited in parks in Colorado's second-largest city and people grilling at home will be allowed to use only gas or liquid fuel, not charcoal or wood.

Burn bans and fire restrictions also have been put in place in cities and counties around New Mexico in recent weeks, with officials warning that any new fire starts would further stress firefighting resources.

More than 2,000 firefighters were battling the 5-week-old fire that threatened the small New Mexico city of Las Vegas for a time before being stopped just outside town in the past week. Still, numerous other small villages remained threatened Monday, including the resort communities of Black Lake and Angel Fire.

Nationwide, about 2,030 square miles have burned so far this year -- the most at this point since 2018, according to the National Interagency Fire Center.