A spicy shrimp stew with roots in the island nation Mauritius 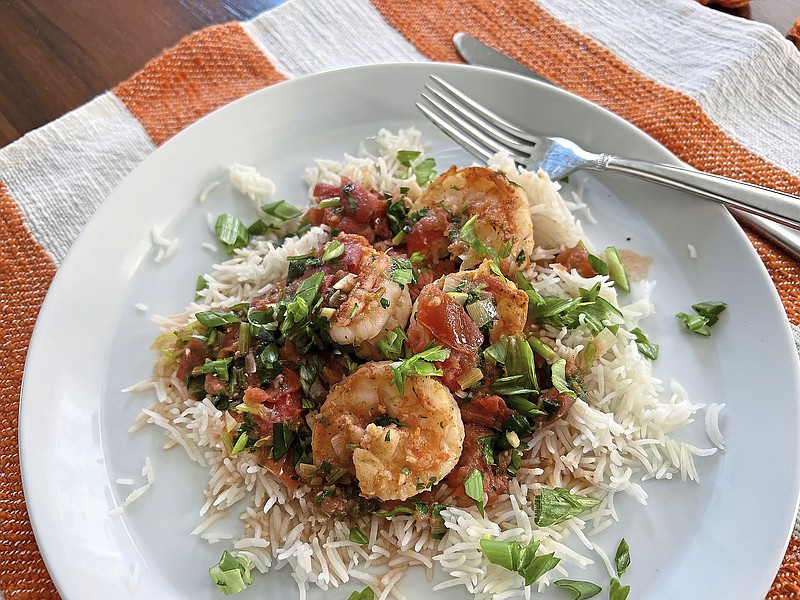 Shrimp rougaille is spicy with chiles and fragrant with ginger. (Gretchen McKay/Pittsburgh Post-Gazette/TNS)

No matter where they hail from, part of the appeal of skillet dishes is the fact they get dinner on the table in no time, usually with just a handful of ingredients.

This spicy shrimp dish has roots that reach all the way to the island nation of Mauritius, east of Madagascar. A tasty blend of European, African, Chinese and Indian influences, Mauritius cuisine features a lot of fresh seafood. Much of it is enlivened with rich spices like ginger, garlic and thyme, and chile also is a key player.

After a quick sear in the pan, shrimp is softly poached in a mildly spicy Creole tomato sauce made from fresh tomatoes flavored with minced ginger, garlic, onion and cilantro stems. It's served with even more cilantro -- you have to be a fan -- and a sprinkle of green scallions.

The recipe calls for extra-large shrimp, but I used colossal (15 per pound) because it was on sale. For more bite, season the shrimp with a little more cayenne, or add a pinch or two to the tomato sauce. Serve with steamed white rice.

In small bowl, stir together 1/4 teaspoon cayenne and 1/2 teaspoon salt. Season the shrimp on both sides with the mixture.

In a 12-inch skillet over medium-high heat, heat oil until shimmering. Add half of the shrimp in a single layer and cook without stirring until golden on the bottom, 45 to 60 seconds. Using a slotted spoon, transfer to plate. Brown the remaining shrimp in the oil remaining in the pan, then transfer to the plate with the first batch.

Add tomatoes and 1 cup water. Bring to a simmer, scraping up any browned bits, then cook, stirring occasionally and adjusting the heat as needed to maintain steady but gentle simmer, until the sauce is slightly thickened, about 5 minutes.

Add shrimp and accumulated juices. Cook, stirring, until the shrimp are opaque throughout, 2 to 3 minutes. Remove the pan from the heat and stir in cilantro leaves. Taste and season with salt and pepper.

Transfer to a serving dish and sprinkle with scallion greens. Serve over cooked rice.

Print Headline: A spicy shrimp stew with roots in the island nation Mauritius