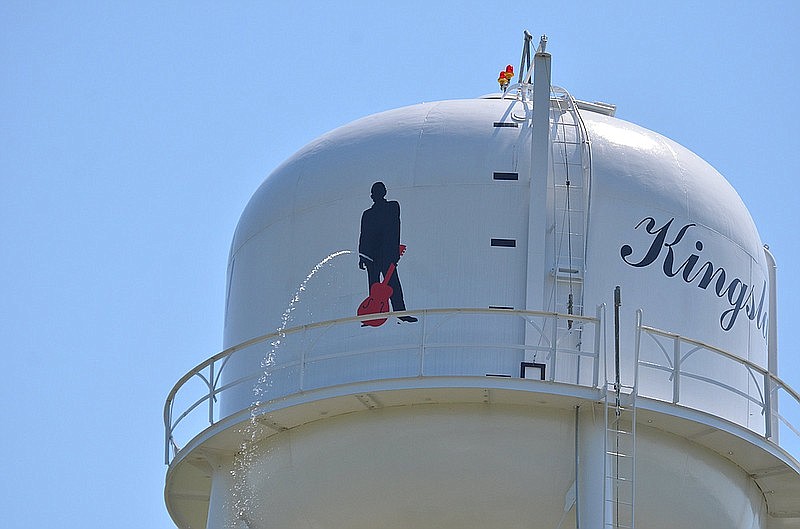 A silhouette of Johnny Cash was apparently the object of vandalism recently when someone shot a hole in the Kingsland water tank at a very precise location. (Special to The Commercial/Richard Ledbetter)

One of Johnny Cash's hit songs, "Don't Take Your Guns to Town," is about a man being urged to leave his guns at home, but the man in the song doesn't listen, and someone is still not listening.

Upon arriving at the Kingsland municipal building early Tuesday, the city's water office manager Betty Graham discovered that a hole had been shot through the adjacently located water tower tank. But it does not appear to be a random shot as the precise location of the bullet hole makes it appear that the image of the Man in Black is relieving himself.

Despite the humor some might find in such a stunt, Kingsland City Council Member Sharon Crosby said the vandalism is being taken seriously.

"Kingsland received a $300,000 grant that we used to entirely refurbish the interior and exterior of the city water receptacle," she said. "After realizing what had happened Tuesday morning, our water department director contacted state and local authorities regarding the vandalism. At this point we are waiting to hear more from the investigation, but Cleveland County has a very good sheriff's department. Sheriff Jack Rogers and investigator Gary Young are working hard to find the responsible person."

This is not the first time the tower has been shot.

In honor and recognition of the fact that Kingsland is the birthplace of Cash, a silhouette of him holding a guitar along with the town name of Kingsland in large script was painted on the water tower during the 2021 renovation project, Crosby said.

"Whoever did this broke federal law damaging a public utility," he said. "It is a very serious issue. Repairs are initially estimated to run over $100,000. In addition, until the repairs can be undertaken, the water pump is running almost constantly to maintain proper water levels and pressure in the tank. The response we've received on our Facebook page is well over 95% highly irate at this senseless act of destruction."

Kingsland, population of about 400, located on U.S. 79, has taken great pride in being the early childhood home of Cash, known as one of the greatest country music singer/songwriters to ever grace a stage. In honor of that fact, the Kingsland Heritage Center committee is working toward converting the former Kingsland grammar school Sturgis Music building into a local museum recognizing Cash along with numerous other notable figures who came from Kingsland.