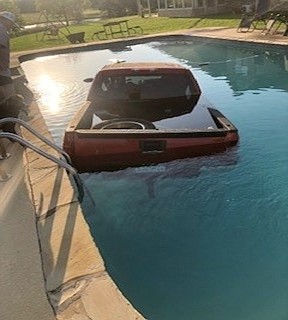 A truck is seen partially submerged in a swimming pool at a residence near DeKalb, Texas. The driver, Erik Scott Shirley, 28, has been charged with criminal mischief. (Photo by Bowie County Sheriff’s Office)

DeKALB, Texas -- A New Boston man has been arrested after allegedly driving his truck into the swimming pool of a Bowie County family.

Erik Scott Shirley, 28, was booked into the Bi-State Justice Center jail on a charge of criminal mischief over $2,500 and under $30,000, according to a news release from the Bowie County Sheriff's Office.

At 6:24 p.m. Monday, the Sheriff's Office responded to a 911 call at a residence on Farm to Market Road 44 outside of DeKalb. It was reported that a truck had driven into an in-ground swimming pool behind the residence.

The DeKalb Police Department responded along with sheriff's deputies and discovered the suspect already detained.

Witnesses stated that they had observed a man driving erratically and screaming out the windows of his truck. He drove the vehicle into the backyard of a residence before allegedly speeding up and submerging the truck in the homeowner's pool, according to the news release.

The driver then ran from the pool toward the residence, where he was held at gunpoint until law enforcement arrived.

The swimming pool was significantly damaged by the suspect's actions, requiring it to be drained before a local towing company could remove the vehicle. The suspect was not known nor did he have any connection to the owners of the residence. Officers involved in the incident think the suspect may have been impaired on an unknown substance, according to the report.