Robot bartender aboard Wonder of the Seas won't flirt with your date, but you still have to tip 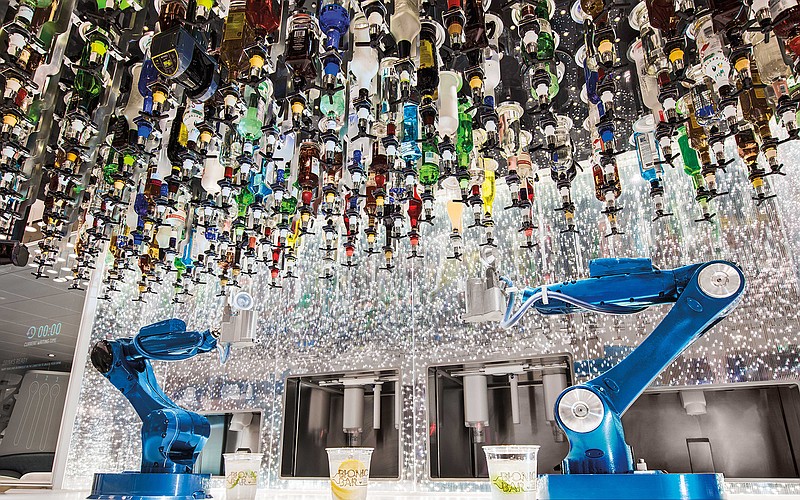 The Bionic Bar, an automated drink-making robot powered by artificial intelligence, is coming to Port Canaveral aboard Royal Caribbean's Wonder of the Seas this November. Cruisers can interact with earlier versions aboard several Royal ships sailing out of PortMiami and Port Canaveral this year. (Royal Caribbean International/TNS)

FORT LAUDERDALE, Fla. -- As if you needed another reason to order drinks on a cruise, soon you'll be able to buy a cocktail made by a robot bartender aboard Royal Caribbean's Wonder of the Seas.

And you won't have to worry about it eyeballing your significant other.

Makr Shakr, an Italian robotics firm that develops artificial intelligence-driven bartending systems, announced that its "Bionic Bar" has been installed aboard Wonder, where it is busy making up to 250 drinks an hour for the ship's passengers.

Wonder of the Seas, Royal's newest ship, is sailing in Europe this summer but scheduled to transition to Port Canaveral in Brevard County in November for weekly seven-night voyages to the Caribbean. The Bionic Bar will remain aboard for those voyages, a Royal Caribbean spokeswoman said Wednesday.

Onboard, they are located in spaces with sleek futuristic designs where guests are enticed to wander over and order a drink so they can watch the machines whir to life and deliver its finished product.

In an interview with the British cruise website Cruise.co.uk, Makr Shakr's creators said they created their first prototype in 2013 in response to a request from Google "to develop an installation which studied how new technologies affect people's lives."

Creators used dancers to model shimmies and shakes that they programmed into the robots to make their movements seem less machine-like.

Since then, Makr Shakr's robotic bartenders have been installed around the world, including in Amsterdam, Las Vegas, and Prague, Czech Republic. Several models, including a mobile unit, are available. Coffee-making abilities are available as an option.

More recently, new players have entered the robotic bartender game. Barney Bar, by Swiss firm F&P Robotics, can mix 16 different spirits and eight sodas, tells bad jokes and costs about $130,000. Cecilia, developed by Israeli firm Cecilia.ai. is a vending machine represented by a bartender avatar who communicates through a front-mounted video screen. She can currently be found at Florida International University's Chaplin School of Hospitality. You can buy her for $60,000 or lease her for $2,300 a month, according to the Miami NewTimes.

The Bionic Bar versions installed on Royal Caribbean's ships employ two robotic arms, but the creators say other models can be composed of a single arm or multiple arms.

Customers order their drinks on a tablet, customizing numbers of shots, levels of mixers, and garnishes. The robotic arms then swing into action, drawing precise measurements from among 140 liquor bottles and 16 mixers extended upside down from the ceiling above the bar.

The robot adds ice and garnishes through a wall-mounted dispenser, then gently tips the blended drink from a stainless steel mixing cup into the customer's glass and slides it to the customer through a slot built into the bar's surface.

Customers' orders are saved in the system's memory and can be reordered as often as desired.

Of course, passengers can't avoid tipping just because their drinks aren't being mixed by humans. The same 18% gratuity charged at every other bar on Royal's ships also applies to drinks made at the Bionic Bar.

Print Headline: Robot bartender aboard Wonder of the Seas won't flirt with your date, but you still have to tip