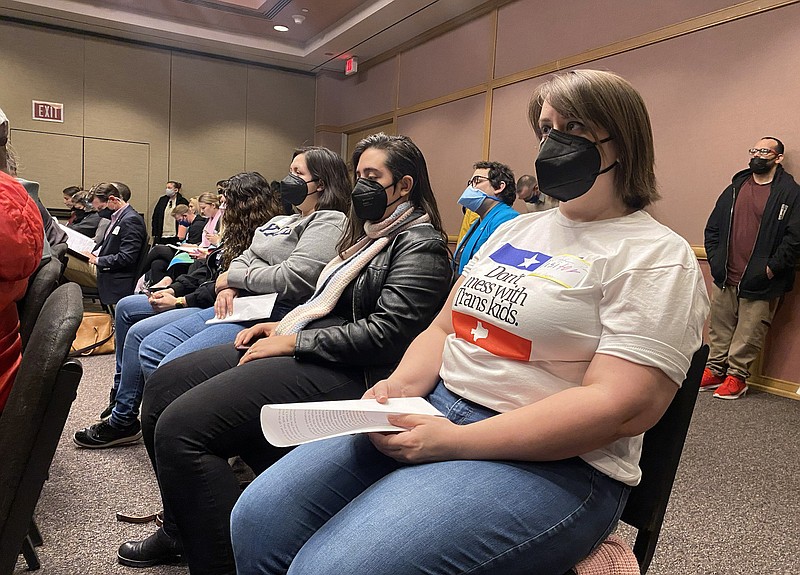 More than 100 people gathered at a public hearing of the Department of Family and Protective Services Council in Austin, Texas on March 11, 2022. The meeting was the first chance for public comment to the child welfare agency after the state began investigating gender-affirming care of transgender minors as abuse. (Lauren McGaughy/The Dallas Morning News/TNS)

DALLAS -- Texas Attorney General Ken Paxton wants the state to intervene in a court battle over medical care for transgender youth at a Dallas hospital.

Paxton filed a petition in a Dallas County court Tuesday night asking that the state be allowed to get involved in the case between Children's Medical Center Dallas and the doctor who once led its Genecis medical program. A judge recently granted Dr. Ximena Lopez's request to temporarily resume her regular practice after Children's and UT Southwestern, which jointly ran the program, last year stopped providing certain medical treatments for adolescent patients newly seeking care for gender dysphoria.

The attorney general is arguing that transgender adolescents should be blocked from accessing treatments like puberty blockers and hormone therapy, which he says may constitute abuse but which are broadly supported by the medical community.

"In order to protect its interest ... in the welfare of children subject to this life-altering decision in the hands of a doctor, the state surely has a right to intervene in this matter," Paxton and his top deputies wrote in their brief.

The brief didn't offer a detailed explanation of how the state wants to affect the case. Neither Paxton nor Gov. Greg Abbott responded to requests for comment.

Paxton's office is also in court over the state's decision to investigate such treatments as child abuse. Last week, the Texas Supreme Court said neither Paxton nor Abbott has the authority to require such investigations, and put one such probe into the family of a transgender teen on hold while Abbott's directive to investigate such cases as abuse is litigated.

Medical care for transgender youth became a major target for Texas Republicans in recent years, especially as they headed into their first competitive GOP primary season this year.

"Through his filing, the attorney general is saying that he and the state should decide what is best for Texas children instead of their parents and chosen physicians," Lopez's attorney Charla Aldous said in a statement. "That's a very dangerous path to follow when we're talking about parents who are literally trying to secure lifesaving, internationally recognized standard-of-care treatment for their kids."

Children's declined to comment on the attorney general's petition.

Lopez first took UT Southwestern to court in March, filing a petition to depose its top leaders in hopes of discovering whether politicians or other outside parties pressured the hospital to disband the Genecis program. Dallas County Court Judge Melissa Bellan approved her request but an appeals court has put the order for depositions on hold.

UT Southwestern has argued its leaders can refuse to be deposed under state laws that bar governmental bodies from being sued.

Lopez filed a restraining order against Children's seeking to temporarily restart treatments. Bellan approved this request, which Children's is seeking to block.

The hospitals which ran Genecis have previously said that they considered media attention and scientific and political controversy when making changes to the program and dissolving its branding.

"After legislative hearings last year brought additional scrutiny of our care, the GENECIS brand became a lightning rod for the controversy over hormone therapy for gender dysphoria, and we made the joint decision to remove the branding so we could care for our patients in a more protective environment," UT Southwestern and Children's Heath said in a joint statement March 28.

"However, we concluded that without some modifications in our provision of these treatments, we risked the possibility of having to shut down our program entirely and catalyzing action that would lead to their ban statewide," the statement added.